2016 and the election has its cast of characters…..the GOP especially has one a/hole after another….the Dems not so much.

The media has been all over Trump, who is another story……… but has been pretty much set with its fave, Clinton…….

But the MSM needs the controversy to make the news more “lively”……Trump does it on the one hand but the Dems is another…..I mean we have a scandal to be, e-mails, and the straight issue politician in Bernie….like I said not enough controversy for their liking……

What could make the Dems more ‘fun’ to report?  There is the hint that Biden may decide to run but it is just not catching fire in the public……what can they do to jazz up the Dems side of the coin?

Then while I was lamenting about this lack of stuff to “jazz” up the Dems for 2016…..BAM!  Woot dare it is!

report that set the internet ablaze first appeared on BuzzFeed. The story suggested some conversations were already in process with Al about the possibility.

“Supporters of Al Gore have begun a round of conversations among themselves and with the former vice president about his running for president in 2016, the latest sign that top Democrats have serious doubts that Hillary Clinton is a sure thing.”

The story also quoted an anonymous “senior Democrat” source about a potential run, affirming the possibility of a Gore run.

“They’re getting the old gang together. They’re figuring out if there’s a path financially and politically. It feels more real than it has in the past months.”

How many times have you heard this from both parties…….our children make a great political prop and campaign slogan……but so far I have seen NO indication that anyone in Washington actually gives a crap about futre generations……how about you?

A group of 8- to 19-year-olds says climate change will doom the future unless changes are made now—and they’re trying to force the government to do just that. Nearly a dozen young people filed a federal lawsuit in Oregon yesterday, arguing that the current consumption of fossil fuels is unconstitutional and a health threat. “We brought this case because the government needs to immediately and aggressively reduce carbon emissions and stop promoting fossil fuels, which force our nation’s climate system toward irreversible impacts,” plaintiff Kelsey Juliana, 18, says in the suit, according to Al Jazeera America. “If the government continues to delay urgent annual emissions reductions, my generation’s well-being will be inexcusably put at risk.”

Former NASA chief climate scientist James Hansen is a co-plaintiff in the lawsuit, which follows a climate change plan unveiled by President Obama earlier this month. The Clean Power Plan seeks to “reduce carbon dioxide emissions by 32 percent from 2005 levels by 2030,” according to WhiteHouse.gov, but the lawsuit demands more aggressive action. A similar lawsuit filed by environmental advocacy group Our Children’s Trust and some of the plaintiffs in the Oregon case was dismissed last year by the US Court of Appeals for the DC Circuit.

The children are truly our future and they are concerned that with the status quo they will have….NO FUTURE!

My hat goes off to these brave kids…..in their hands this world just may survive the stupidity around climate change.

Remember the good old days when the airways were full of the lie of Iraqi WMDs?  Remember our knee jerk response to the lie was to invade Iraq and bring them security and democracy?

Just how did that work out for us?

In those days the media played an integral part of the massive deception of the American people to support a war we knew would bite us in the butt……but we could not let Saddam use those weapons again.  He had already gassed his own people, the Kurds to be exact……

Do you recall that after years of invasion and searching there were NO WMDs to be found…..remember that?

Well sports fans the media is at it again!

Gassing Iraqi Kurds was considered one of Saddam Hussein’s most heinous crimes, and American officials now suspect that ISIS is doing the exact same thing—and it may be using Saddam’s old weapons. Officials believe the militants used mustard gas, a chemical weapon banned worldwide in 1993, against Kurdish fighters in northern Iraq this week, reports the Wall Street Journal. The group’s battlefield use of the agent is obviously an extremely worrying development, officials say, and it’s not clear how ISIS obtained it: It could be from one of Saddam’s old stockpiles or from stockpiles in Syria, where President Bashar al-Assad claimed in 2013 that all the regime’s mustard gas had been destroyed.

“If they do possess these kind of weapons,” Democratic Rep. Adam Schiff tells CNN, “my guess is they’re more likely to have gotten them as old weapons left over in Iraq from the old WMD program there than they were likely to obtain them in Syria in some kind of a hidden cache of the regime’s.” ISIS seized the Saddam regime’s old chemical weapons plant last year, though officials said at the time that anything left there was probably useless. US officials have downplayed the risk to American personnel in Iraq, saying they’re not engaged in combat and, in any case, mustard gas “has to be used in high concentrations to be fatal,” the Journal reports. (In the years after the 2003 invasion, the US government

Is this the open salvo from the media to gain popular support for sending in the troops to do the heavy lifting against ISIS?

Are the American people really that STUPID?

It is election time and we will hear so much about religion……most of which is pure hyperbole……but there nonetheless….. 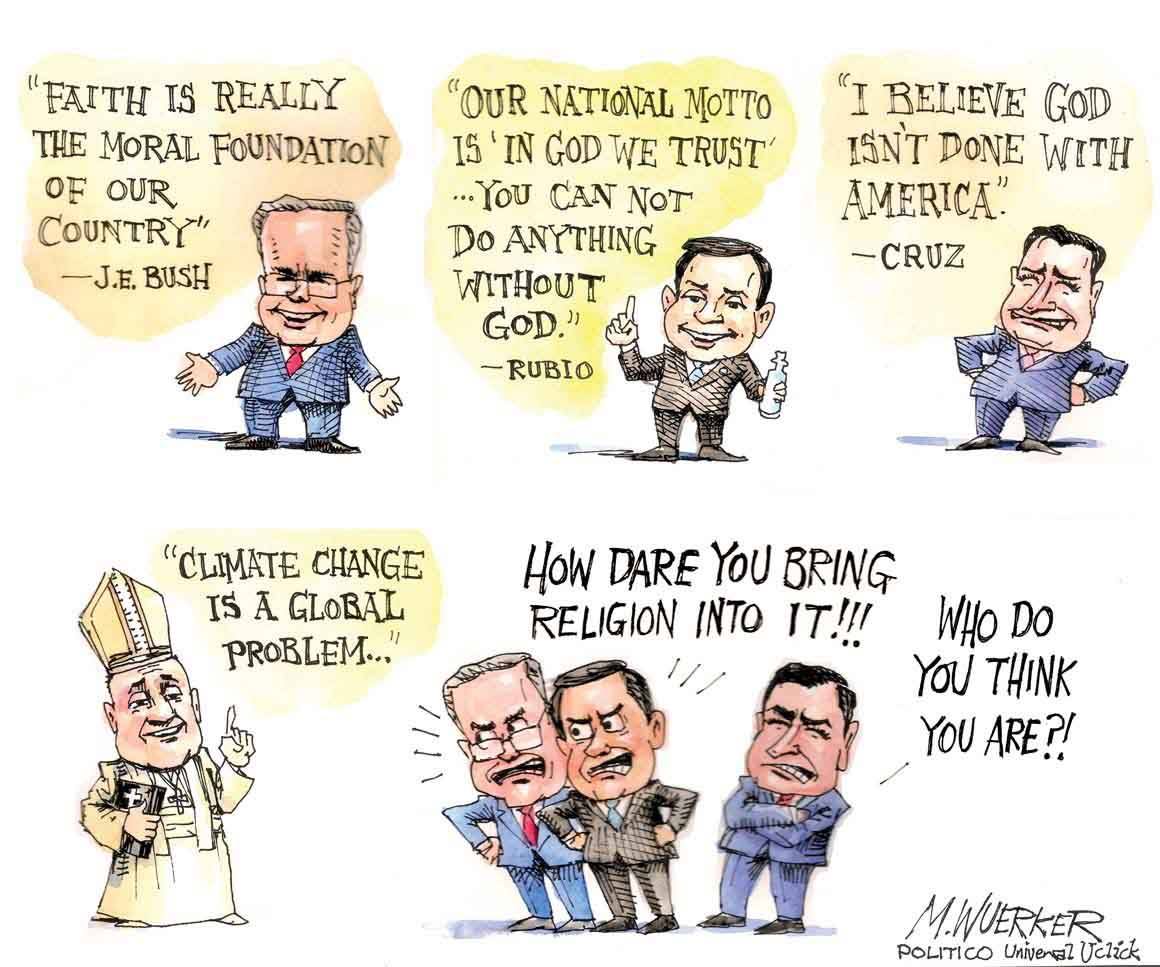 This will most likely not be my last post on the Iran nuke deal…..why?  Everything that can be said ….hasn’t.

But if someone wants to debate on the value of the deal………… please at least know what the deal is…….emotional ramblings is NOT a basis of opposition.  I have posted several posts on the deal and any information you need can be found on IST……holding a grudge for 36 years is not an adequate reason for opposition.

I will revisit this subject if there is a major development that I feel needs to be addressed…….but for now……fascinating……..READ ON!

By now the whole world knows that Israel and especially the  PM BiBi is dead set against the new agreement between Iran and the P5+1……..

He has been predicting that Iran would have a bomb in as little as  6 months to the high end, 5 years……and that has been the case for two decades….Iran will have a bomb…(insert time frame)…….

But could there be more to his predictions and opposition?

Nowadays there is an opinion on the Iran deal everywhere.  Most of they are not based in reality but rather emotional ramblings about some mythical problem.

Few people that oppose the deal have not taken the time to acquaint themselves with the agreement……they had rather jump on that silly bandwagon of hatred stemming from actions in 1979……basically holding a grudge.

Sen. Schumer is a Dem and opposed to the deal….I expected him to be in opposition after all he is owed by AIPAC and Israel cash…….but is his opposition real or made up to appease those paying him to be in Congress (not talking about the voters here)…….