I have tried to ignore the silly news of the “scandal” involving the Clinton e-mails……I have purposefully by-passed any thing that was remotely connected to this…..but no matter how hard I try it is always there…..as the lead story of the day or the lead story on any news show, talk show or otherwise……

Do I need to give some background?  God, I hope not!

Anyway this “investigation” into the e-mail service that Clinton used while performing her duties as SecofState……this has become another one of those games that people play in Washington….kinda like the Benghazi debacle…..and that one is still being investigated and each time they hold a news conference there is NO new leads to follow or anything concrete to report……

This is a game being played.  Why?  It is easier than talking about issues and policies…..all the talk is conjecture and that makes it perfect for candidates to grasp at and to drag along with NO actions.

With all the hoopla in the media and the same hoopla on the Right….just how important is this situation to the American people?

Republicans are trying to stop Hillary Clinton by making her emails into a presidential disqualifier, but a new poll shows that the American people don’t care about her emails or her server.

For Republicans, Clinton’s emails have become the latest in a long line of recent conspiracy theories that includes Benghazi, the IRS scandal, and Obama’s birth certificate. Every second that a Republican presidential candidate wastes talking about emails is a win for Democrats, but they will be talking about something that the broader electorate does not care about.

The media loves the Clinton email story because it allows them to recycle their old Clinton scandal narratives. It is easy copy, especially during a slow summer political season, but it is not making a difference with voters.

There is a possibility that this could be a bigger story than I see it is now…..but probably is just games played by useless individuals that otherwise would be insignificant and believed by even less significant people.

Stop wasting time and get to the business of this country……..we have wasted enough time and resources on a wide array of wild goose chases……

Back during my war, the Vietnam War, it was not uncommon for the kids of the wealthy to buy their deferments….kids like me either waited for the draft call to come or we got the jump on it and enlisted….

Now that we have an unending war……somethings never change…… 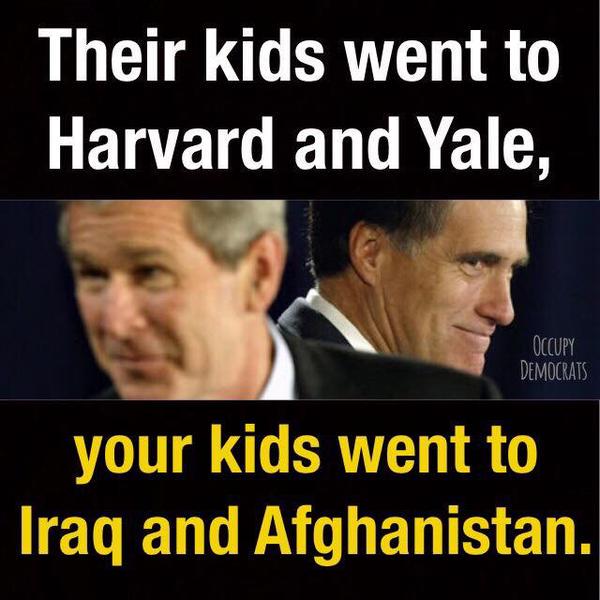 For me…..if we must fight wars then everybody needs to participate……because after 50 years ….NOTHING has changed.

The wealthy go to college and the poor go to war…….

Today and tomorrow is my days with the doctors….so I will be a bit light in the post area…..most of them will be presses and thin on original posts…..I apologize but I am usually not in the best of moods when I return from my visits…..please bear with me.

Since the end of World War 2 the US has not had a good scorecard on the inventions that we have ventured into…..Korea could be a good one….but it was a draw….Vietnam was a disaster…..Grenada was moronic….Panama was a waste…..Somalia was a horror show…..Iraq has been a nightmare that has NO end……

There is always the future and the way we are flexing our muscle around the world more interventions are coming…..and how many of those will be worthless and disastrous?

Scorecard on US Interventionism by Ivan Eland — Antiwar.com.