In case the debates are as boring as I think….maybe this game could help you and your friends pass the time until Duck Dynasty is on…….. 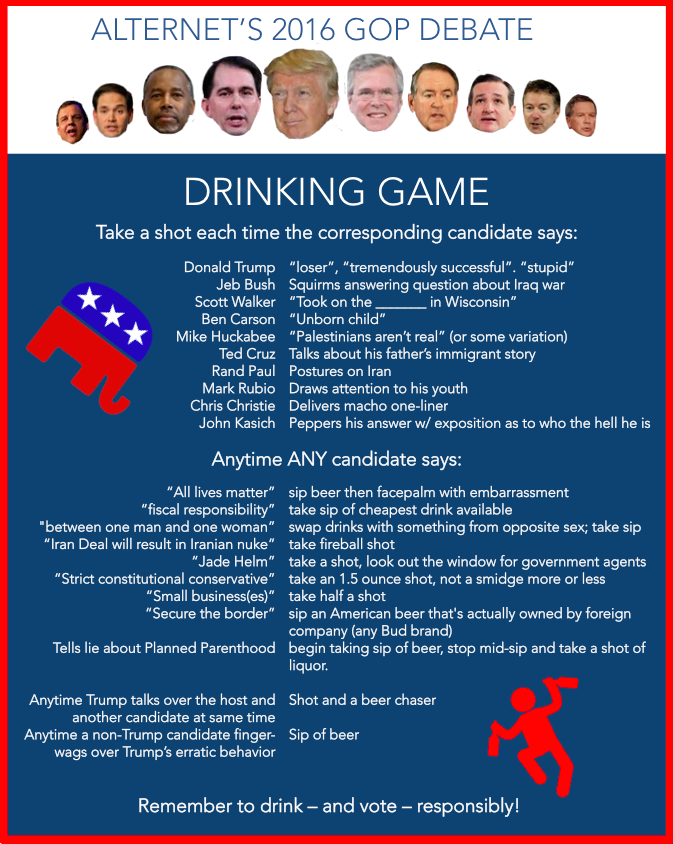 For my last post of the day I would like to say a few words about the GOP debate tonight featured on FOX News…….the first part of debate night will be the “kiddie table” debate of those poor souls that could not find a way to break into the top 10……sad that this debate will have more actual candidates than the “big dance” later………

My friends and I have been talking about the possible questions that will be asked by FOX……I say there will be Planned Parenthood, Iran nuke deal and a whole array of softball questions…..nothing of substance……since it i the GOP there never is any substance……

But what do others think  about the questions that should be asked?

The first GOP primary debate is tonight and while the questions—just like the participants—will be chosen by Fox News, there are a lot of interesting suggestions out there for the 10 candidates to face.

Do you have any ideas on the questions?

In case you would like something to do while the clowns perform……….

Time for some rest……and Down The Rabbit Hole!

There has been much written and much said about the drone program of assassination…….evidence shows that we have NO idea who we are killing with each strike.

Thanks to Reliance on “Signature” Drone Strikes, US Military Doesn’t Know Who It’s Killing.

When the military training exercise entitled as Jade Helm 15 was first announced the Moronic Right wen batcrap crazy…..people like Alex Jones started telling their idiot followers that the US military was preparing for a military takeover…….even an elected official, the governor Texas ordered the National Guard to keep tabs on the exercise to head off any attempts at a junta.

What truly worried me was that many people that I considered rational played along with the nonsense and even tried to make sense of why the government would do this.  DO what?  The military is on a training exercise something they do all the time and have been doing for decades without any hint of a coup.

Maybe the people that were most concerned had just viewed the movie “7 Days In May” on TMC……..that could explain the irrationality……

I have been sarcastically digging at the people that took this thing seriously because I am an irritating SOB…….and I want them to feel as foolish as they are…….

But what about Jade Helm 15…….what has been happening….I mean other than some non-existent coup……..

We have one report on Jade Helm………

North Carolina is not one of the states where the U.S. military training exercise dubbed “Jade Helm 15” is taking place this summer. Nevertheless, three men from Gaston County were charged with conspiring to arm themselves with illegal explosive devices to combat what they saw as a potential military takeover, according to court documents unsealed Monday in U.S. District Court in Charlotte.

A tipster first contacted the FBI in June after becoming concerned that Litteral and Campbell were “preparing to use lethal force against United States government forces in order to defend against the imposition of martial law or other infringements on their rights,” according to an affidavit. The affidavit noted that the two men had discussed their belief that “Jade Helm 15” was actually a cover for the implementation of martial law with the tipster.

Is that it?  NOPE!  My state of Mississippi has its share of morons (more than most states)……and someone had to pull the trigger…..

For the second time this week, a gunman opened fire at Camp Shelby, a military training center that is part of the “Jade Helm 15″ training exercises, according to the Associated Press.

A man matching the same description as Tuesday’s shooter, white and driving a red or maroon pickup truck, opened fire around 8 a.m. Wednesday, the Clarion-Ledger reports. There were no immediate reports of injuries.

On Tuesday, a gunman with the same description fired at two soldiers training at Camp Shelby. Two men were taken into custody and questioned, but were then released without charges, according to the paper.

Appears that Southern meth heads and crack smokers are more of a threat then some poor soldier on a training exercise…..

Looks like today is going to be my history lesson day…….

70 years ago this month the US became the first and only country to use a nuclear device in war……..the bomb dropped and over 100,000 people were dead in a matter of seconds…………

Is it now time for the world to remember this atrocity and work to eliminate ALL nuke weapons?  That means US, China, Russia and ISRAEL…….et al.

Our Nuclear World at 70 | Common Dreams | Breaking News & Views for the Progressive Community.

Once again I will force feed a little history to my readers………..

When I lecture on the Middle East I always get the question…..what is the deal with Israel and the Palestinians?

I tell my audience that it is a loaded question…..that I could talk for hours and still not give them an accurate look at the situation……

“Greater Israel”: The Zionist Plan for the Middle East | Global Research – Centre for Research on Globalization.