For many years the sex workers have been looked down upon and and have had to “work” in the shadows and faced legal actions when encountering the police.

All that bad mojo is not as bad as it once was…..

For the first time ever, a majority of American voters somewhat or strongly support decriminalizing sex work, according to new polling results published Thursday as part of a broader report from 28 human rights and public health groups.

The poll from Decriminalizing Survival: Policy Platform and Polling on the Decriminalization of Sex Work (pdf) shows that 52% of voters across all age groups, locations, and political party affiliations support decriminalization. The greatest amount of support is from voters aged 18–44; the support level declines with each older group.

A personal thought…..they should decriminalize and tax those participating…..I do not care how someone makes their cash as long as they pay their taxes…..

As we start the 2020 election….I thought a historical look into the past might amuse my readers….

When taking history in school we are all taught about those men that were elected as president of the United States……but who were the “also ran”…..or should I say “close but no cigar”?

An interesting question as we wind down to the presidential election for 2020…..and I can throw a little history in there as well…..(life is good)…..

We begin the lesson with Daniel Webster…..

Webster is a terribly important figure in American history. Secretary of State twice, Webster has been called one of the greatest Senators. He never achieved his ultimate ambition, the presidency, but ironically he turned down two opportunities which would have granted his wish.
In 1840, Webster was offered the vice presidential spot on the Whig ticket, but declined. He had sought the nomination himself, but lost it to William Henry Harrison, who offered him the Secretary of State position. Harrison is famous for having died thirty days after his inauguration, catapulting “His Accidency”, Vice President John Tyler, to the White House. Had Webster accepted Harrison’s offer, he would have been the 10th president, not Tyler.
Webster continued as Secretary of State, negotiating a final and lasting treaty with Britain, but eventually left the Cabinet and returned to the Senate. He sought the Whig nomination for President again in 1848 but was again defeated by a military hero, Zachary Taylor. Taylor, like Harrison before him, offered Webster the Vice Presidency. Webster clearly didn’t think his response through, and had not learned from the past. He turned Taylor down, saying “I do not propose to be buried until I am really dead and in my coffin.” Webster missed out on the presidency again, when Taylor died in 1850 of what was probably gastroenteritis. Instead, Millard Fillmore ascended to office, though he did appoint Webster as Secretary of State again.

The presidency was always Webster’s goal, and he might have achieved it had he been a little less stubborn and ornery. As for what he might have done in office, we can take some inspiration from his achievements in the rest of his public life. Webster was a prominent conservative and determined to preserve the Union as tensions over slavery began to boil. He supported the Compromise of 1850 which did just that, at least for a while. He also advocated, and may have worked towards, stronger relations with Japan. Webster is famed now as a character in a story and play, The Devil and Daniel Webster in which he defends a farmer who sells his soul to the devil, a testament to his famous oratory. If he had been president, his oratory might not have been enough to help him avoid the pitfalls of the office at a very turbulent time.

Once again some sad news….more US soldiers were killed in Afghanistan……. 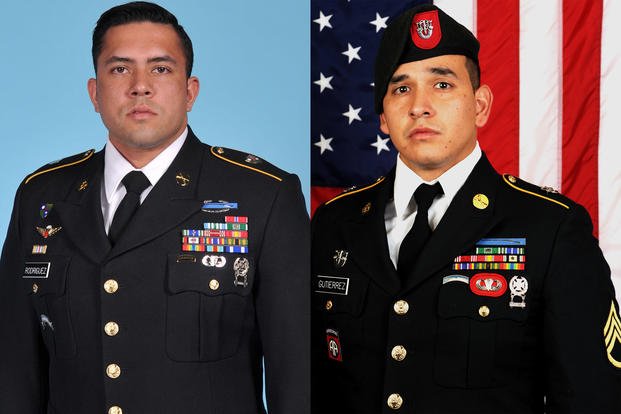 The Defense Department has awarded posthumous promotions to two Special Forces soldiers killed in a firefight in Nangarhar province Afghanistan on Saturday.

Six other U.S. troops, who were not identified, were wounded in the fight, which began when “an individual in an Afghan uniform opened fire on the combined U.S. and Afghan force with a machine gun,” U.S. Forces-Afghanistan spokesman Col. Sonny Leggett said in an earlier statement.

It remains unclear whether the act was a deliberate enemy attack via infiltration or an accident of some kind, Nangarhar provincial governor Shah Mahmood Meyakhil said in a message, according to an Agence France-Presse report.

Rodriguez and Gutierrez were both posthumously promoted from the rank of staff sergeant and awarded the Bronze Star and the Purple Heart, U.S. Army Special Operations Command Lt. Col. Loren Bymer said in a released statement.

We give our sympathies to the grieving families….may their loved ones rest in peace.

Please stop and think about the madness of our endless wars and the costs.

Now that the impeachment debacle is over the House has returned to trying to do the work of the people…..

Most Americans know and despise the “Citizen United” ruling by the SCOTUS that gave corporations unlimited power in our elections. But now the House is finally trying to change that damage….

Most Americans agree on background checks for gun purchases, lower prescription drug prices, and the need to take on climate change. But for years, an army of lobbyists and unrestricted outside political spending by corporations have blocked nearly every attempt to make these things happen.

A big reason for this, argues Rep. Steve Cohen (D-TN), is the the Supreme Court’s 2010 Citizens United ruling, which he says has resulted in “the corrosion of our democracy.” The Supreme Court’s ruling notably allowed corporations to create super political action committees (PACs), which are not required to disclose their donors, and spend billions of dollars in US elections.

A growing number of Americans want to get money out of politics. Nearly seven in 10 Americans support a constitutional amendment that overturns Citizens United, according to a 2018 study by the University of Maryland School of Public Policy’s Program for Public Consultation. Now that almost 20 states and more than 800 local governments have called for a constitutional amendment that places reasonable limits on corporate campaign contributions, some members of Congress appear to be listening.

I like that idea…..but the House can pass all they want…it will be up to the Senate to come on board…..and I do not see that part of the Congress that is mostly controlled by corporations going against their masters.

In other House news……they have signed on to a pro-labor bill…..

Union leaders and labor rights advocates applauded the Democrat-controlled U.S. House for passing landmark legislation Thursday night that supporters have called one of the most notable efforts to expand workers’ rights in several decades.

House lawmakers voted mostly along party lines to approve the Protecting the Right to Organize (PRO) Act (H.R.2474), which passed 224–194 with 12 members not voting. See the roll call vote here.

“This is a watershed moment for the labor movement and shows what working people can accomplish when we come together to demand a voice on the job and a seat at the table,” said Lee Saunders, president of AFSCME, the nation’s largest trade union of public employees.

“Make no mistake, this is the most significant step Congress has taken to strengthen labor laws in the United States in 85 years and a win for workers everywhere,” said AFL-CIO president Richard Trumka, declaring the measure “the labor movement’s number one legislative priority this year.”

Another bill that will die a death in the Senate……

“The Senate where good bills go to die!”

Then there is a waning support for that abortion that Trump calls a “peace plan” for the Middle East…..

Over 100 House Democrats signed a letter, released on Friday, critical of President Donald Trump‘s peace plan for the Middle East.

The two-page letter, with seven pagers of signatures, was led by Rep. Alan Lowenthal, D-Calif., and warns that a two-state solution for Israel and Palestine would be impossible under the plan. At a White House ceremony on Jan. 27 unveiling Trump’s 200-page peace plan, Israeli Prime Minister Benjamin Netanyahu promised to move forward on establishing additional settlements and exercising Israeli control of the disputed West Bank area.

I agree with these Reps but I need to add….their concern is way too late….the damage is being done…..

Some thoughts from my opinion blog….GSFP…..chuq

The American voter is not that interested in voting regardless of what the MSM tries to infer by these endless polls.

The real proof is that less than 50% of registered voters actually go to the polls…..write that down…less than 50%.

Most people don’t see many opportunities to participate meaningfully in our political process, and many others feel alienated from it altogether. That’s a dangerous place for any democracy to be.

One of the biggest challenges facing American politics is polarization. The public is increasingly split along partisan lines, and the very idea of “Americanness” — who counts as an American and who doesn’t — seems hopelessly muddled. But it’s precisely because we’re so divided that now is a great time to ask what citizenship means and how we might revive it.