Nope this is not some BS about some Iranian general…this is about famous assassination….that of Malcolm X in 1965……

In case you did not pay attention in history class….I can help….

Looks like there may be a new look at this crime and those that were convicted…. 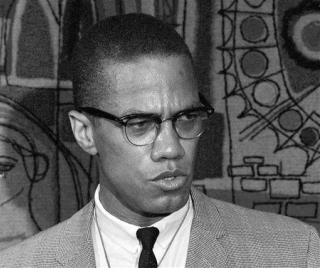 Three men were convicted of assassinating Malcolm X in 1965. One of those men confessed, but the other two always maintained their innocence. Now, after the release of a Netflix documentary, the Manhattan District Attorney’s Office is considering reopening the case over what critics say was a botched police investigation. Coverage:

After months and months of nothing but campaign ads…..billionaire Mike Bloomberg has finally bought a spot on the debate stage for the first time……..

The next Democratic debate, the ninth so far, will feature a brand-new face onstage. CNN reports that Michael Bloomberg has qualified for Wednesday evening’s event in Las Vegas by earning 19% support in an NPR/PBS NewsHour/Marist poll, making it the former New York City mayor’s fourth national poll in which he earned above 10%—a Democratic National Committee requirement to earn a spot in the televised back-and-forth. Bloomberg is “looking forward to joining the other Democratic candidates … and making the case for why he’s the best candidate to defeat Donald Trump and unite the country,” his campaign manager, Kevin Sheekey, says in a statement. A Bloomberg rep also confirmed to NBC News on Monday that he would take part in the Vegas debate if he qualified.

So far, Joe Biden, Pete Buttigieg, Amy Klobuchar, Bernie Sanders, and Elizabeth Warren have also qualified, with a deadline of 11:59pm Tuesday for any other stragglers; candidates can also qualify by earning 12% in two single-state polls out of Nevada and South Carolina, or by having at least one delegate from the Iowa caucuses or New Hampshire primary. CNN notes this will be the “first significant campaign test” for Bloomberg, who hasn’t yet faced off directly against the other candidates. And while those others seem primed to go on the attack against Bloomberg, there are also grumblings about the DNC’s recent move to do away with the grassroots donor threshold it had in place, paving the way for him to attend. “To now change the rules in the middle of the game to accommodate Mike Bloomberg … is wrong,” says a Sanders adviser, per NBC. “That’s the definition of a rigged system.”

This is good because finally Bloomberg will have to answer the questions that the rest of the field have been doing so for a very long time.

This is all wonderful for after years and years of me bitching about the wealthy running for office and Bloomberg has proven my point for me and all I can say is …Thanx.

Will he still be the “man of the hour” after this debate?

Note:  I do not like FOX News I have gotten more accurate information from the back of a Fruit Loops box….than from this “news site”.

Something new from FUX News…..they are taunting the idea that if Dems win they will pack the court with liberal justices….you cannot like what the Repubes are doing now but that is somehow different.

On Feb. 8, just before America’s first-in-the-nation primary, Demand Justice, the left-wing group dedicated to transforming our courts, hosted a New Hampshire forum for Democratic presidential candidates, along with the abortion-focused groups NARAL, the Center for Reproductive Rights, and the All* Above All Action Fund. These groups were able to attract all the viable Democratic presidential contenders with the exception of former Vice President Joe Biden.

Let’s give the event hosts credit for a forum that gave us a chance to hear from the candidates on the subject of the courts, a topic that has rarely come up during the debates. They did voters a service, however unintentionally, by revealing just how dangerous it would be to our judicial system to elect a Democratic president in 2020.

The leading contenders made it clear they would advocate changing the very structure of the Supreme Court in order to advance their liberal ideology — or, to use the more familiar term, packing the court. Consider as a historical reference point Franklin D. Roosevelt’s notorious proposal of 1937, which would have authorized the expansion of the Supreme Court to as many as 15 justices. Although Democrats dominated Congress at the time, enough of them had the statesmanship to recognize a blow to our judicial system when they saw it, and accordingly blocked it.

To help out with this let’s go to something other than FUX News….

Though the Constitution provides that a Supreme Court shall sit at the apex on the judiciary, our founding document is silent about how many justices sit on the Supreme Court. A 1789 law established a six-justice Court, and the number of justices ebbed and flowed during the 19th century — swelling to 10 justices under President Abraham Lincoln before settling into a nine-justice configuration under President Ulysses S. Grant.

After a reactionary Supreme Court struck down several New Deal policies, President Franklin Roosevelt proposed expanding the Court to as many as 15 justices — although this proposal did not fare well politically, to say the least.

There you have it…..both sides of this proposal…..(at least you have both sides here….IST is your one stop reading most of the time)……..

Personally I do not like the idea that a judge has a gig for life….and have written how we can have justice and end most of the partisan BS……https://gulfsouthfreepress.wordpress.com/2019/12/06/those-supreme-court-judges/

There is a solution to this but it would require logic and rational thought and we know that is not possible in DC at this time.

That is Bloomberg and Biden…..there is a new poll in Florida and it will be a shock for some…..

Michael Bloomberg’s 2020 strategy of skipping the early states and pouring money into those that vote later appears to be paying off in the crucial swing state of Florida. A new survey from St. Pete Polls has him on top there—and the development appears to have come at the expense of Joe Biden, reports the Hill. A month ago, Biden easily led the pack at 41%, while Bloomberg had 17.3%. In the new survey, Biden has cratered to 25%, while Bloomberg has risen to 27.3%. Behind them are Pete Buttigieg (10.5%), Bernie Sanders (10.4%), Amy Klobuchar (8.6%), and Elizabeth Warren (4.8%).

“Oh my,” writes Ed Morrissey at Hot Air, noting the dramatic reversal of fortune for Bloomberg and Biden. “A few hundred million ad dollars later, Bloomberg now looks very much like a player in the Sunshine State,” he writes. “If that’s all it takes to undercut Biden, then he wasn’t ever going to survive a frontal collision with Donald Trump.” Florida Politics reports that Bloomberg has spent at least $11 million on TV ads in Florida’s big markets, while his Democratic rivals have yet to begin focusing on the state. Florida’s primary is March 17

Mikey just cannot keep his mouth shut trying to out do his fellows Dems with stupid attacks…..this time he attacks Libertarians and Unions…..

Michael Bloomberg has made it his late life’s mission to take on the National Rifle Association, calling the organization “shameful,” “dangerous” and extreme.

The problem now that he’s seeking the Democratic nomination? In his final year as New York mayor, Bloomberg compared two groups core to the Democratic base — a local faction of the American Civil Liberties Union and the New York City teachers union — to the NRA.

“We don’t need extremists on the left or the right running our police department, whether it’s the NRA or the NYCLU,” the then-mayor Bloomberg said of the New York Civil Liberties Union, in a 2013 speech in which he defended the city’s controversial stop-and-frisk policy.

A video of the remarks was obtained by POLITICO.

Not to worry if you do not support either candidate…..it is a month before the Florida vote and a lot can happen…..but that said Bloomberg does have a massive amount of cash on hand and can buy his way past the voters.

Biden has always used South Carolina as his firewall because of the popularity of Obama….but there seems to be a crack forming in the firewall…..

His message is uninspiring. His ground game is flawed. After Iowa and New Hampshire, they’re no longer convinced he can beat Donald Trump.

Interviews with two dozen South Carolina lawmakers, consultants and voters here suggests there are deep cracks in Joe Biden’s firewall state, where his campaign expects to turn his misfortunes around with a robust victory that highlights his broad-based support — particularly among African Americans.

Bloomberg just wants his money to do the talking….Biden has a feeling of entitlement….neither will do anything but let the status quo continue to rule the roost.

National Security is always a good reliable political prop….my favorite is “all options are on the table”…..

From here on we shall call it NatSec…

What is it? This NatSec thing.

National security is a corporate term covering both national defense and foreign relations of the U.S. It refers to the protection of a nation from attack or other danger by holding adequate armed forces and guarding state secrets. The term national security encompasses within it economic security, monetary security, energy security, environmental security, military security, political security and security of energy and natural resources. Specifically, national security means a circumstance that exists as a result of a military or defense advantage over any foreign nation or group of nations, or a friendly foreign relations position, or a defense position capable of successfully protesting hostile or destructive action.

National security is the requirement to maintain the survival of the state through the use of economic power, diplomacy, power projection and political power. The concept developed mostly in the United States of America after World War II. Initially focusing on military might, it now encompasses a broad range of facets, all of which impinge on the non military or economic security of the nation and the values espoused by the national society. Accordingly, in order to possess national security, a nation needs to possess economic security, energy security, environmental security, etc. Security threats involve not only conventional foes such as other nation-states but also non-state actors such as violent non-state actors, narcotic cartels, multinational corporations and non-governmental organizations; some authorities include natural disasters and events causing severe environmental damage in this category. Measures taken to ensure national security include: ⁕using diplomacy to rally allies and isolate threats ⁕marshaling economic power to facilitate or compel cooperation ⁕maintaining effective armed forces ⁕implementing civil defense and emergency preparedness measures

Matters not which definition one prefers….the fact is we will soon pick a president and so far NatSec has not shown its head in the debates….if it is so damn important then why not?

… national interests are the DNA of strategy and the underlying structure upon which every nation bases its strategic thinking.  To understand America’s current actions on the international stage requires a look deeper than the partisan-inspired rhetoric in the headlines. One way to approach this is to elevate the discussion beyond threats and adversaries to an analysis of national interests.  Interests drive political decision-making and help us understand U.S. foreign policy. They describe the “why,” reveal the underlying logic, and provide the standards of measurement upon which to base decisions.

Strategic thinkers with military backgrounds often tend to fixate on threats.  Without question, at the tactical and operational level, threats provide a valuable lens.  However, when facing strategic-level complex adaptive problems, such as great power competition and trans-regional violent extremism, a focus solely on threats could quickly lead to miscalculation and loss of focus.  If this occurs, the U.S. could find itself trying to chasing competitors everywhere, thereby remaining reactive instead of proactive, hence, strategically adrift.

Maybe if candidates put more emphasis on NatSec we could start a real conversation about it…instead of platitudes.