A good follower and commenter on IST, GP Cox…….https://pacificparatrooper.wordpress.com/ ……..has brought this to my attention and wanted me to pass it along to my readers.

Fort Jackson South Carolina holds many memories for me for that is where I took my basic training in the Army….and now they are making news to help military families deal with what the soldier is dealing with in his/her service to the country.

The families of Soldiers taking part in training with the 2nd Battalion, 13th Infantry Regiment, now have access to a course titled, “Basic Training for Families.” The course connects spouses and family members with Soldiers in BCT through the Army Family Team Building initiative.

“I had concerns about the type of spouses we were creating,” said Tina Justice, leader of the battalion’s Family Readiness Group. “We weren’t really teaching them to be self-reliant, empowered spouses. It’s very overwhelming when you first enter the Army life. The goal was to create a system to help families when they have questions, and give them the tools to do the work, themselves.”

I have written before about the contributions the families make in service to the nation…..https://lobotero.com/2017/11/11/our-debt-to-military-spouses/

These brave people should not be marginalized or forgotten for they make the service of their loved ones possible.

If you feel you must thank someone then thank a military family member that is holding the family together and helping their loved ones cope as well.

After a weekend of mass shootings and all the coverage it has gotten from the MSM our Dear president has made a statement that may surprise many……but not before spending time Tweeting about a UFC fight…..

As the nation reeled from two mass shootings in less than a day, President Donald Trump spent the first hours after the tragedies out of sight at his New Jersey golf course, sending out tweets of support awkwardly mixed in with those promoting a celebrity fight and attacking his political foes, the AP reports. Trump was to travel back to Washington later Sunday and aides said he would likely address reporters, but the nation did not glimpse the president in the immediate aftermath of a shooting in El Paso, Texas, that killed at least 20 people and, hours later, one in Dayton, Ohio, that claimed at least nine lives. Never seemingly comfortable consoling a nation in grief, Trump will be carefully watched for his response to the attacks, again inviting comparison to his predecessors who have tried to heal the country in moments of national trauma.

“The FBI, local and state law enforcement are working together in El Paso and in Dayton, Ohio,” Trump tweeted Sunday morning. “God bless the people of El Paso Texas. God bless the people of Dayton, Ohio.” His first tweet after the El Paso shooting on Saturday hit similar notes, with Trump calling it “terrible” and promising the full support of the federal government. But just 14 minutes later, he tweeted again, a discordant post wishing UFC fighter Colby Covington, a Trump supporter, good luck in his fight that evening. That was soon followed up with a pair of retweets of African American supporters offering testimonials to Trump’s policies helping black voters, though the president polls very poorly with blacks. Trump’s two elder sons attended the UFC fight, while social media photos show that Trump stopped by a wedding at his Bedminster club on Saturday night.

But not to worry he finally found the words for a nation reeling from the violence…..

President Trump emerged from his New Jersey golf club Sunday and said “perhaps” the government could do more to control guns, CNN reports. “We’ve actually done a lot,” he said on a tarmac before boarding Air Force One for Washington. “But perhaps more has to be done.” The president, who has used explosive rhetoric and posted tweets that many consider racist, added that “hate has no place in our country and we’re gonna take care of it.” He also said the weekend’s two major mass shootings, which left 29 dead and 53 wounded, would have been worse without good law enforcement.

“It would have been unbelievable,” he said. “It [was] horrible but it would have been so much worse.” Still, USA Today quotes him as saying “we have to get it stopped. This has been going on for years.” CNN notes that Trump did manage a bump-stock ban, but hasn’t gone after gun control on a larger scale, unlike President Obama, whose executive actions on the issue included mental health and background checks. Trump said he had spoken to Attorney General William Barr and others about guns and would make a statement Monday at 10am, per Bloomberg.

How long will it take for his “people” to “clarify” what the president has said?

Will the NRA stand by for such talk?

Better yet will those enablers of Trump within the GOP stand by this type of rhetoric?

Wait!  Even better yet will Trump walk back and waffle as he seems to do on most issues?

Or will he use his Executive Power to do something substantial?

How long will it take for yet another unstable individual to go on a shooting rampage?

Will the Democrats get some much needed traction on this issue?

Finally, does anyone really care…other than the media?

So many questions….and so few answers.

In case you are interested…this is what a 100 round drum that a shooter had looks like….. 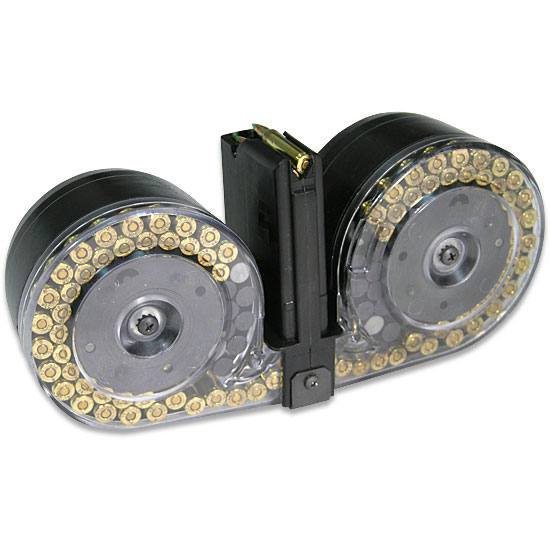 A disgusting piece of weaponry.

The year was 1987 and a treaty signed between the US and then USSR in essence ended the Cold War,

It is official…the end of the Cold War has ended.

The United States plans to test a new missile in coming weeks that would have been prohibited under a landmark, 32-year-old arms control treaty that the US and Russia ripped up on Friday. Washington and Moscow walked out of the Intermediate-Range Nuclear Forces Treaty that President Reagan and Soviet leader Mikhail Gorbachev signed in 1987, raising fears of a new arms race. The US blamed Moscow for the death of the treaty, saying that for years Moscow has been developing and fielding weapons that violate the treaty and threaten the US and its allies, particularly in Europe. “Russia is solely responsible for the treaty’s demise,” Secretary of State Mike Pompeo said in a statement released on Friday, per the AP. Russia, meanwhile, pointed a finger at America.

“The denunciation of the INF treaty confirms that the US has embarked on destroying all international agreements that do not suit them for one reason or another,” the Russian Foreign Ministry said in a statement Friday. “This leads to the actual dismantling of the existing arms-control system.” Pompeo said the US first raised its concerns that Russia was violating the treaty in 2013 during the Obama administration. He said the US tried for six years to prod Russia back into compliance. In February, Trump determined that Moscow was in material breach of the treaty, and the US suspended its own obligations under the agreement. That started a six-month clock to get Russia back into compliance—time that ran out on Friday. “As it has for many years, Russia chose to keep its non-compliant missile rather than going back into compliance with its treaty obligations,” Pompeo said. “The United States will not remain party to a treaty that is deliberately violated by Russia.

With the treaty now officially gone, the Pentagon is acting quick to start testing and developing new intermediate-range nuclear tests, since of course such missiles couldn’t be developed since 1987.

Officials are concerned, however, that in bankrolling nuclear-capable missiles that were up until yesterday illegal to develop, they don’t have enough money set aside, and US officials say that they are concerned House Democrats may resist further funding.

Defense officials were already criticizing Congress for not giving them more money to develop the missiles, saying “it’s going to help Russia” to not spend more money on nuclear-capable arms.

Russia, for their part, issued an offer for the US to join them in announcing a temporary moratorium on deploying any intermediate-range nuclear missiles to try to prevent a race to put a bunch of more nuclear arms into the theater in Europe.

The US is unlikely to agree to such a deal, as the Pentagon seems to have been salivating, from the moment the INF’s collapse was suggested, about the chance to get a bunch of new missiles into testing.

I have said it before and I shall say it again…..”Oh goody we are watching the end of the Cold War end”.

Does anyone remember back 6 or 7 months ago?

The MSM and war hawks were fixated on the South American country of Venezuela…..how the people were tired of the “S” word government and were just waiting for a leader and the US to step in and save them from themselves was the script.

Just a short round up of IST posts on Venezuela…..

Sadly the luster is off that lily…..the MSm has lost all concern about the events in Venezuela.

When previously unknown Venezuelan opposition politician Juan Guaidó stood up in an East Caracas plaza and declared himself “interim president” of the South American country, Western corporate media were ebullient.

In those heady early days, corporate journalists could scarcely conceal their love affair with the 35-year-old politician, whom they likened to Barack Obama (CNN, 2/7/19) and described as a “freedom fighter” (Fox Business, 1/29/19) and Venezuela’s “only democratically elected figure” (MSNBC, 1/24/19), who had “captured the heart of the nation” (New York Times, 3/4/19).

Nearly six months later, with Guaidó no closer to ousting Venezuela’s elected president, Nicolás Maduro, from Miraflores Presidential Palace, the enthusiasm has dampened. Now that the honeymoon is over, it would appear that corporate journalists have been compelled to reckon with some uncomfortable truths about Guaidó, US sanctions and the coup they had been vigorously endorsing.

They, the Neocons, just could not make the case for US intervention….which is not that hard to do…..but apparently they just could not lie enough for action.

Finally some sanity in our foreign policy but with NO help from Trump or the war hawks…..so they turned their sights on Iran after the Venezuela fail.

Funny how the MSM media has all but forgotten Venezuela…..to all the Neocons….not to worry you will ALWAYS have Iran.

But not to worry….His Majesty Trump has done what he can to return Venezuela to the headlines…..

WASHINGTON (Reuters) – U.S. President Donald Trump said on Thursday he was considering a quarantine or blockade of Venezuela, as the United States steps up pressure on President Nicolas Maduro to relinquish power.

Trump did not elaborate on when or how such a blockade could be imposed, and his administration has so far focussed on diplomatic and economic pressure against Maduro while steering clear of any military action.

Asked by a reporter whether he was considering such a measure, given the amount of involvement by China and Iran in Venezuela, Trump said: “Yes, I am.” He gave no details.

Venezuela’s Information Ministry did not immediately respond to a request for comment.

The United States and most Western countries recognise opposition politician Juan Guaido as the rightful leader of Venezuela.

Trump has slapped a series of escalating sanctions on Venezuela to pressure Maduro to step down and has previously declined to rule out military action. But U.S. officials have made clear that they are focussed on economic and diplomatic measures and have shown no significant signs of taking up military options.

Russia, China and Iran have expressed support for Maduro and Russia has dispatched small numbers of troops to the South American country.