I try to post whenever I read or hear about another US soldier dies in our many years of intervention….my readers need to know…. 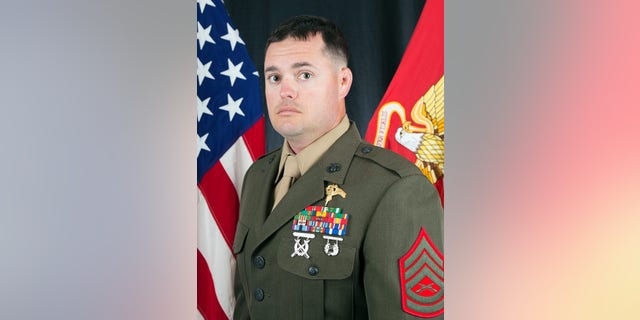 The latest is a Marine from 2nd Raider Bn. killed in Iraq….

The Pentagon identified a US Marine killed in Iraq this weekend as Gunnery Sgt. Scott A. Koppenhafer.

Koppenhafer, 35, of Mancos, Colorado, was killed Saturday by enemy small arms fire while conducting combat operations, the Department of Defense said in a Sunday news release.
Koppenhafer was killed while advising and accompanying Iraqi Security Forces on a planned operation in Nineveh province, Iraq, according to a press release from Combined Joint Task Force – Operation Inherent Resolve.
According to Marine Corps Times, Koppenhafer was named “Marine Special Operator of the Year” in 2018 by the Marine Corps Association for his role in guiding elite Iraqi Special Operations Forces in northern Iraq.
Koppenhafer was supporting Operation Inherent Resolve, the official name for the US-led operation fighting ISIS. A Pentagon inspector general’s report on the fight against ISIS released earlier this month warned that “despite losing its territorial ‘caliphate,’ the Islamic State in Iraq and Syria (ISIS) solidified its insurgent capabilities in Iraq and was re-surging in Syria.”
(cnn.com)

Now there seems to be some question about his death…..

He was first reported to have died by small-arms enemy fire. The Pentagon is now looking into whether he was accidentally shot by U.S. or Iraqi forces instead.

Most of the 5,200 U.S. troops in Iraq train Iraqi security forces and conduct counterterrorism operations, according to the newspaper. A report by the Pentagon’s Office of Inspector General released earlier this year said ISIS militants were waging an “effective clandestine” insurgency in Iraq and Syria and still pose a significant threat

Too many of our best are maimed and killed in these useless conflicts….conflicts that are not needed only to pad some back accounts.

Take a few moments to give some thought for the family…..may their loved one Rest In Peace.

After the deadly nuke explosion in Russia that killed some of their nuclear scientist….the president took to his favorite source of manure spreading Twitter……

In an apparent attempt to “one-up” and embarrass Russia many are wondering if President Donald Trump just tweeted out U.S. national nuclear secrets. Seven people died last week during a “failed test of Russia’s SSC-X-9 Skyfall, a nuclear-powered cruise missile still in development,” as Vox reported. One expert called it a flying nuclear reactor.

President Trump, who has been tweeting up a storm ever since he kicked off his 10-day August vacation at his golf course in Bedminster, NJ, apparently decided late Monday afternoon was a good time to respond – not with condolences for the lives lost, but by gloating.

This is not the first time that Trump has divulged secrets for public consumption without the declassification process.

Now I wonder what would be said if say Obama or Clinton had thrown secrets out there to gain some sort of political advantage….thoughts?

How long will the American people take this sort of treasonous activity?

Mr. President, please stop giving away our secrets to your bud Vlad.

2020 cycle has a “rock star” in the running for the Dem nomination……at least that is his feeling about his run…..but with the political climate changing in Texas these days….some are begging Beto to return to Texas and run for the Senate…..

The editorial board of the Houston Chronicle likes Beto O’Rourke. Which is why the editors are asking O’Rourke to scrap his presidential candidacy—and run for the Senate in Texas instead. In their editorial, the editors take note of the moment last week when O’Rourke went off-script and castigated President Trump and the media’s coverage of him in earthy terms after the mass shooting in his hometown of El Paso. “We aren’t used to seeing candidates act like real people,” says the editorial, noting that O’Rourke paused his campaign to be in El Paso. “Frankly, it’s made us wish O’Rourke would shift gears, and rather than unpause his presidential campaign, we’d like to see him take a new direction.”

That new direction? Challenging GOP incumbent Sen. John Cornyn. “Beto, if you’re listening: Come home,” wrote the editors over the weekend. “Drop out of the race for president and come back to Texas to run for senator. The chances of winning the race you’re in now are vanishingly small. And Texas needs you.” The idea that O’Rourke should run for the Senate instead of the White House has been percolating of late, but the candidate rejected it in an interview with the New York Times on Friday. “I’m running for president,” he said, when asked for a response to those pushing the Senate bid. (O’Rourke lost to Texas GOP Sen. Ted Cruz last year, but the margin was surprisingly close.)

I have been saying all along that Beto was just a “pretty boy Floyd”….just a new flavor of an old reliable story……ego before country.

He is running for president because that is what this rich boy’s ego needs after his loss to Cruz in 2018…it is not what is best for the people of Texas but rather how his ego gets massaged.

Beto is not what this country or the Democrats need….we need someone who truly wants to help the American people not to pump their egos.

The big news for the MSM today was that Starbucks will bring out their Autumn stable “pumpkin spice latte”…..really?  This is news why?

But you were slobbering over the idea of a pumpkin spice latte…real news has hit.

I have been waiting for some good news out of Afghanistan for 18+ years…..and then word came…..

Just 4 days ago some good news was reported…..it said that the peace deal with the Taleban could be signed within days…..

Peace talks between the US and Taliban are going to be taking a little time off for the Eid al-Adha holiday. When they come back after the holiday, the Afghan peace deal is going to be the focus again, and the expectation is it will be finalized.

Hopes for a finalized deal are nothing new, but both sides are now saying they believe that a peace agreement will be reached, and signed, at some point in the this week. This will then lead to work on direct Taliban-Afghan talks on power-sharing.

That’s a key issue. The deal with the US involves removing foreign troops, Taliban keeping foreign Islamists out of Afghanistan, and a ceasefire. The power-sharing deal is the last aspect of peace, and the Taliban had long resisted entering such talks until the US pullout was agreed upon.

Then the grim news came out today…..NO DEAL…..

Hopes that the end of Eid al-Adha would lead to an announced peace deal in Afghanistan has not happened, at least not yet, with the latest round of Doha talks ending Monday with the Taliban saying that “both sides agreed to consult their respective leaderships for next steps.”

Details are still emerging on the most recent talks, and are likely to do so for the next couple of days. There was no indication that any specific obstacle remains, and indications are the peace deal looks roughly the same as it has after the last couple of rounds.

The deal would see foreign troops withdraw, in return for the Taliban keeping ISIS and al-Qaeda out of Afghanistan. The hope was that a ceasefire might’ve been announced this week, and that Taliban-Afghan power-sharing talks would begin

Illustrates the news from Afghanistan…it is good…it is bad….it is up….it is down.

Two summits with Kim and a little has changed….Kim got to be on the international stage just like he always wanted and Trump get a photo op that solves NOTHING.

But Kim is now a global figure……thanx to Trump

There’s no question that North Korean leader Kim Jong Un is in full control of his nation. But a recent change to how he’s being formally described in the North Korean Constitution may allow him even more diplomatic leverage as he steps with increasing confidence onto the world stage for negotiations over his powerful weapons program.

Despite a flurry of unprecedented summits between Kim and the world powers that surround him, the outcome of that crucial diplomacy is very much in question amid currently deadlocked nuclear disarmament talks and an outburst of North Korean weapons tests in recent weeks.

US President Donald Trump said on Saturday (Aug 10) that Kim Jong Un told him North Korea was ready to resume talks on its nuclear and missile programme as soon as US-South Korea military exercises ended.

North Korea fired what appeared to be two short-range missiles on Saturday, South Korea said, in a “show of force” against the military exercises.

More missile launches are highly probable, as the North Korean military is conducting its own summer drills, South Korea’s Joint Chiefs of Staff said in a statement.

In comments to reporters on Friday, President Trump said he agrees with North Korea’s Kim Jong Un in his opposition to the major US-South Korea war games, saying he’s also “never been a fan” of the war games, because “I don’t like paying for it.”

This makes some sense in that President Trump was quick to agree to halt such joint exercises in Korea during peace talks when the process began. However, there is no indication such talks have been planned.

That was apparently part of the subject of Kim Jong Un’s letter to Trump, objecting to the exercises, which North Korea sees as simulated invasions. In acknowledging Kim’s position, Trump did not indicate if he was going to make any changes to policy.

Looks like His Majesty has recieved another “beautiful letter” from his bromance,,,,,

President Trump has reported on Friday that he received a “very beautiful letter” from North Korea’s Kim Jong Un, saying he believes it is possible that the two of them could meet again, but not saying when such a meeting might happen.

Trump did not provide details on the letter, or the possibility of talks. The two last met on June 30 and agreed to further meetings. There has since then been no indication any such talks have bee planned.

Recently, North Korea has badly criticized the US over planned wargames, and has fired short-range missiles several times. Trump emphasized that he does not consider those missile firings to be a violation of any of North Korea’s pledges.

This is what passes for foreign policy under the Trump White House…..any other time it would be mocked and dismissed….but these days it is front page news.

All the summits and all the “beautiful letters” will accomplish one thing…..North Korea will remain a nuclear state.

The president’s willingness to talk with North Korea’s Supreme Leader Kim Jong-un deserves praise, despite complaints from the warmongering Right and partisan Left. However, his demand for instant and complete denuclearization was never realistic.

Alas, negotiations in which the president placed so much hope have ground to a halt. Most recently, North Korean diplomats skipped the ASEAN summit, where Secretary of State Mike Pompeo had expected to meet with North Korean foreign minister Ri Yong-ho. Said Pompeo: “We stand ready to continue our diplomatic conversation with the North Koreans,” but, he added, “I regret that it looks like I’m not going to have an opportunity to do that while I’m here in Bangkok.”

All this “news” around North Korea will do two things…..keep Trump in the news and provide the media with some dandy photo ops.