I see by the clock on the wall….it is time to end my posting day……..I leave my readers with one last thought…….BACON! (Sorry must be on-set Touret’s)….

Yes we have a GOP debate to night…..there will be a “kiddie” table one first and then the Big Event….the Trump Show will commence….. 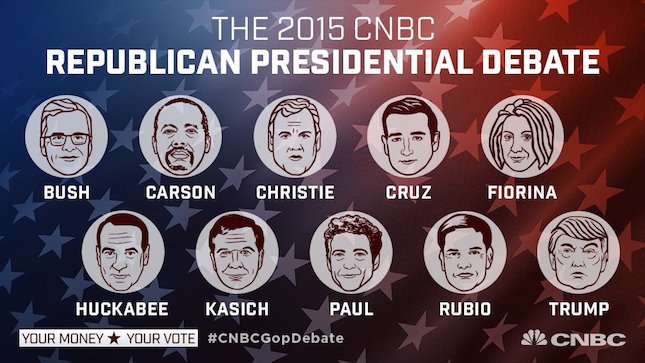 I will go on record as saying that there will be NOTHING new here…Trump will perform…all others will try to play catch up….

But I guess if you must amuse yourself with silliness….then what you need to watch for in tonite’s matinee……

Me?  I have a really excellent bottle of Spanish Sherry…..I will sleep like a baby.

I read this piece over at my friend at “The Militant Negro” and found it a fascinating turn of situations…..

It appears that Americans are abandoning a sinking ship more quickly than normal….Americans are giving up their citizenship….but why?

The first group consists of people who just can’t take it anymore. Constant warfare, intimidation, and the steady erosion of freedom have pushed them to their breaking points.

They look around and think, “This is NOT the country that I grew up in.” And they renounce their citizenship in protest of a government they no longer want to be associated with…….(read more)…….

Source: Americans renouncing US citizenship soars to yet another record high | The Militant Negro™

An interesting stat that we have heard NOTHING about…..apparently the MSM does not want us to know that these people are out there…..or the reasons they want to leave.

My friend over at “Lines by Liming” turn me onto this story…..and after I read about it I have to concur with his humorous take of the story…..

Hobby Lobby?  Remember them?  They will not let you work for them if you happen to be gay….they find same sex marriage abhorrent…..or to terminate a pregnancy…..and they are a good Christian organization…..remember them now?

According to them…..a woman does not have a right that is Federal law……but this is somehow just fine……

The Museum of the Bible being built in DC by the Christian family behind one of the nation’s biggest arts-and-crafts retailers is coming along nicely. Maybe too nicely, per law enforcement sources, who tell the Daily Beast that the Green family—the ones whose Hobby Lobby chain claimed a big victory last year when the Supreme Court ruled it didn’t have to provide insurance for employee birth control—has been the subject of a four-year federal investigation for “illicit importation of cultural heritage from Iraq,” per the Daily Beast. That comprises hundreds of clay tablets, thousands of years old and inscribed in ancient cuneiform, allegedly smuggled out of the Middle East and shipped to the Greens’ Oklahoma City home base in 2011. The tablets and tens of thousands of other artifacts are for the museum, set to open in 2017 as “one of the world’s largest private collections of rare biblical texts, objects, and artifacts.”

The problem with the Iraq tablets is that, as museum head Cary Summers puts it, there was “incomplete paperwork” attached, though the Daily Beast points out that a simple logistical issue wouldn’t have dragged on so long. Instead, someone looking to bring in artifacts that should never have left their country of origin may have purposely undervalued the antiquities so they could be smuggled into the US. An unnamed source tells the Daily Beast the FedEx forms were marked “hand-crafted clay tiles,” with a value of around $300—which is “technically accurate, but … vastly underestimates their true worth, and … obscures their identification as the cultural heritage of Iraq,” the site notes. Hobby Lobby CEO Steve Green tells the Daily Beast, “Is it possible that we have some illicit [artifacts]? That’s possible,” but adds they didn’t knowingly act illegally.

So is it okay to STEAL?  That is exactly what they are doing…stealing another culture’s history…..I believe there is something written down about stealing, right?

But because they are a “good” Christian group these laws do not apply to them…is that about it?

Stealing history of a people is by far the worse type of rape…the rape of a culture…there is NO excuse for this…..religion or otherwise……There is NOTHING “Good” or “Christian” about the theft of a country’s heritage….PERIOD!

Speaking of “good” Christians…..look at what that mental midget Pat Robinson has to say about a guy who ran Guatemala…….

Robertson gushed over Ríos Montt, claiming that he was the real victim because he was targeted by liberals just for being a good Christian.

Rios-Montt is a good person because he went to a Christian church?

“At the height of the bloodshed under Ríos Montt, reports put the number of killings and disappearances at more than 3,000 per month,” Patrick Daniels of the Guatemala Solidarity Network noted. “Such was the extent of the violence that in 1999 the UN commission concluded that it constituted acts of genocide.”

His regime specifically targeted indigenous communities with violence and displacement, and in 2013 Ríos Montt was convicted of genocide for crimes committed against the Maya Ixil community. “Hunger, systematic rape and forced displacements were all used as tools of war against the Ixil people,” the BBC reported. However, the conviction was overturned due to a legal technicality and Ríos Montt was later declared unfit to stand for retrial.

Let’s pull out of the geopolitical hole for awhile….shall we?

I remember a few years back when all the rage was the successes of the Charter Schools…..I said then that it was a con job….what it boiled down to was education by lotto.

The media trotted out the successful charter schools for all the world to see….it was then decided by the media) that this was the cause to highlight….the problem was they gave the public a very narrow view of the situation…..they never reported on the crappy job this did at educating our children….

The sell was a slogan…..”return control of public schools back to the local area”…..it is still being used to convince people of the necessity to privatize public education….of course they will not call it what it is……but rather some cutesy slogan that all can remember and repeat ad nauseum…..

Our kids deserve strong schools and great teachers under local control. That’s what the charter fight is all about…..it is a lie.

If this is an issue that will be on the ballot in your area…..then please learn everything you can about charter schools or whatever slogan they are using to get you to vote for the privatization of your public schools…..do not let them kill public education……it is a fundamental right of our republic…..do not let it go the way of your voting rights…….or abortion rights.

Apartheid was the system of government and segregation used by the government of South Africa for decades……once the system was eliminated the world thought that it would never make a comeback…..they were WRONG!

Israel is turning into an apartheid state with its handling of the Palestinian question and the West Bank……I pointed this out in an op-ed that I wrote for Ace News Room……..

Source: Apartheid: Then And Now ! | In Saner Thought

The television interview, which Al Jazeera described as Olmert’s first international interview since he was sentenced for eight months in jail for fraud and breach of trust this past May, aired on Friday evening.

According to excerpts released before the interview aired, Olmert rejected Netanyahu’s claim at the UN that Palestinian President Mahmoud Abbas isn’t interested in negotiations with Israel. “[Abbas] certainly is a partner for peace. There is no other,” Olmert was quoted as saying. “He is the president of the Palestinian Authority and he, time and again, proved that he’s against terror and that he is ready to spell it out in the strongest possible terms.”

The West was a major mover on the apartheid thing for South Africa……it needs to once again get on the horse and ride to the aid of a people oppressed by a government that wants world recognition.

But in case you still cannot see it……..in their own words…… 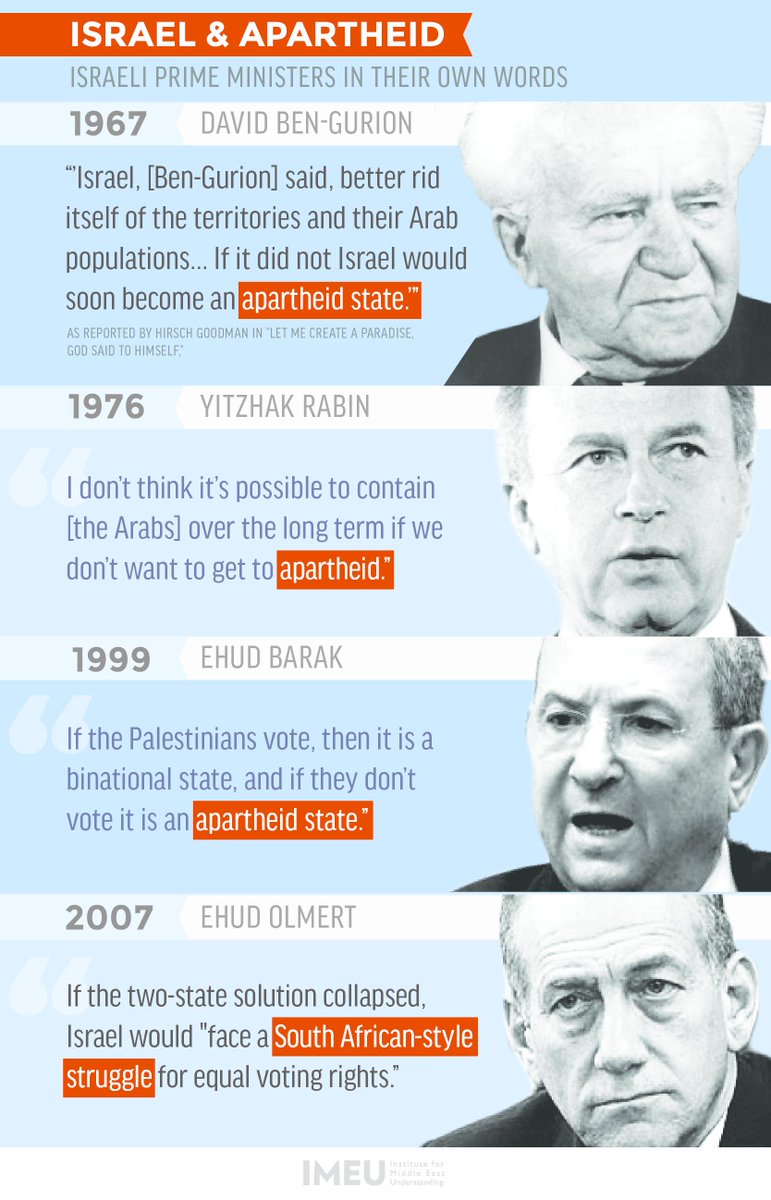 With the “Wall” in place it has become an apartheid state…..no matter how you try to spin it….the truth is the truth!