Tonight and one night only the Dems will be center stage…..they will be debating among the 2016 Dem candidates for the party nomination…..at long last we will hear the difference between Clinton and Sanders and the other also ran…..

I not so sure if CNN would be the best venue….but at least the American voter will get to hear these candidates and watch them perform…..after all presidential politics is a performing art form…..

We have all been laser focused on the GOP group of 15 or whatever it is now…..the Dems have been an after thought for the media….tonight they are center stage…from CNN a thought or two about tonight’s drama…….

My prediction for the first Democratic debate, CNN, October 13: 10.3 million.

Big difference in the numbers, right? No big surprise there, as the Trump factor really is that huuuggge when it comes to bringing in casual political viewers and those normally not remotely involved in the process to the table. But apparently my 10M+ prediction is a bit aggressive in the eyes of two industry bigwigs I spoke to, as both believe the number will be more in the eight million range, with each citing past Democratic primary debate audience numbers as a guide.

So sports fans would you like to know what to expect?

The Democrats debate for the first time Tuesday night, with the festivities from Las Vegas starting at 8:30 Eastern on CNN. You can expect Hillary Clinton, Bernie Sanders, Martin O’Malley, Jim Webb, and Lincoln Chafee on stage, with Joe Biden still a wild card. Some related developments:

There you have it……Biden is still the big story….

There should be a few things to watch for in debate……

Democrats stage their first debate at 8:30 Eastern Tuesday night on CNN, and at this point, Joe Biden is looking like a no-show. That leaves Hillary Clinton, Bernie Sanders, Martin O’Malley, Jim Webb, and Lincoln Chafee in the mix. Here are five things to watch:

I wish I could say that this will be a learning debate….but sadly it will not….it will however be pretty dry if they talk about policies….and Americans do not want that….they prefer a mouthy twat spouting crap……so this should not be as popular as the GOP….less morons running for the office.

Tonight the Dems hit the big time!  Yep, that time again….another debate only this one will be for the Dems…..

We will finally be exposed to all 5 candidates in the run for the nomination of the party….we will get the chance to hear what they think about different things….which is good….but only if substantial questions are asked……personally I am not looking for anything substantial to be asked……

These are the question that need to be asked….but if everything is normal….none of them will be done so…..

Don’t count on hearing anything consequential tonight. That would mean asking a question with teeth…..the MSM is just not up to asking real questions…..

For some time now the media has been asking that very same question…..they cannot grasp the reason why someone who fights special interests and refuses PAC money could possibly be getting the crowds he, Bernie, is getting.

The MSM answer to this phenom is that he is the anti-Clinton candidate or that he was just in the right place at the right time for all the anger the voter is having over our political process……there is a wealth of other possible reason for his popularity.  All I can say is that if the journalists had been reading IST this whole time I have answered that exact question with a poll that they were too good to pay attention to when it came out……

What poll would that be?

I did a short post back in 2009 that answers their question…….

Bernie is talking about the issues that the American people care most about….he is not playing the same game as the GOP with their accusations and blame……

But check it out for yourself……

If the American people stay angry and keeps on message and does not fall prey to the attacks….then the possibility of a better government is just a vote away.

The problem is….the longer Clinton is exposed to the public the more her numbers slide…….

Hillary Clinton, the presumptive Democratic nominee for president, took a nosedive in a new Reuters poll released four days before the first Democratic primary debate, the Hill reports. Clinton lost 10 points in just five days, dropping from 51% on Oct. 4 to 41% on Friday. According to Newsweek, Clinton’s loss amounted to gains for Bernie Sanders (28%) and Joe Biden (20%), who has yet to say whether or not he’s even running. The Hill points out Clinton’s slide in the poll comes amid ongoing coverage of her personal email account and Benghazi. But it’s not all bad news for Clinton. Despite dropping 10 points overall last week, her lead over Sanders actually increased over what it was in September, according to Newsweek.

There is a good possibility that her slide is thanks to the news cycle and the fixation on her by the media…..that bids well for Bernie……as long as she is the news story du jour then Bernie’s star will shine.

There are some news sources that paint a better picture of Bernie….the media and the little dictator of the DNC, Wasserman-Shultz and are doing all they can to make Clinton the nominee…..but Bernie is popular where he should not be popular…..

Source: The media’s lying to you about Bernie Sanders: This is why a socialist can win the Fox-loving red states – Salon.com

I wish that I could say that the prospect of Bernie getting the nomination looks good ……….I am not optimistic…….I feel the American people will dumb it down and vote for tweedle dumb or tweedle dumber for prez……sad……we have a chance at some real change and we will blow it….like always.

All said…I still Feel The Bern!

Whenever I write anything remotely pro-Palestinian I usually get some Christian that tries to derail me in one way or the other….usually it is a quote from their book about Israel is for the Jews given to them by God….so it sez in the Old Testament….I then ask them who wrote the book?  The answer is simple……Jews.

Their unshakable support for anything Israel just amazes me…..why?  Is it that for the prediction of the “end of days” there must be an Israel and a rebuilt temple?  Whatever it is most are almost rabid in their support of Israel.  I hate to tell them but the feeling is NOT mutual.

They never seem to grasp that Christians are not as welcome as they think they are……at Christmas and Easter okay but that is a money thing from the tourism not some religious tolerance.

In the past Christian chapels and churches have been destroyed in various ways not by Palestinians but rather Ultra-fundamentalist Jews….the most recent attack…..

In recent years, the Feast of Tabernacles (Sukkoth) has become a significant religious holiday for evangelical Christians who support Israel. They come to Jerusalem by the thousands from all over the world for a week of celebrations that include study sessions of the Bible and the New Testament. This year, the International Christian Embassy Jerusalem held a convention at an auditorium in Jerusalem attended by thousands of Christian Zionists.

It seems, however, that certain groups in Israel are deeply concerned by the growing phenomenon and even fighting it. According to those opposing it — for the most part, ultra-Orthodox and other religious Jews — it is actually Christian missionary activity aimed at encouraging Jews to convert to Christianity. Recently, in an unusual move, Israel’s Chief Rabbis David Lau and Yitzhak Yosef issued an appeal against the convention, describing it as “a spiritual danger” “undermining the Jewish character” of Israel.

The Yad L’Achim organization, which its leaders say has been fighting Christian missionary activity for 50 years, is behind the struggle against the convention in Jerusalem. Yad L’Achim considers it a dangerous and even an illegal attempt to proselytize about Christianity in the Land of Israel. “For years we had a tacit understanding with the International Christian Embassy in Israel, whereby they steered clear of missionary activity, and over the years, they did keep their part of the deal,” Rabbi Shmuel Lifschitz, who heads the organization, told Al-Monitor. “However, last Sukkoth, they hosted soldiers and young Jews and openly preached for conversion to Christianity. As far as we are concerned, it was crossing a red line.”

Christians time to wake up and smell the coffee…..you are NO more welcome in Israel than is a Muslim!

Ask the Catholic Church if you do not believe what I say…….read this…..

Last week Israeli security forces arrived with bulldozers at a piece of property owned by the Catholic Church in east Jerusalem, close to the West Bank city of Bethlehem. They said it had been built without a permit and proceeded to destroy it.

This provoked a backlash from the head of the Catholic Church in Israel who said the demolition was carried out without any prior warning.

“This act is against the law, against justice and humanity, against any ideology upon which peace can be built and increases segregation and hate,” Latin Patriarch of Jerusalem Faud Tawwal told AFP at the site of the demolition on Tuesday. The property had been standing before Israel annexed the area after the 1967 Six-Day War, he said. 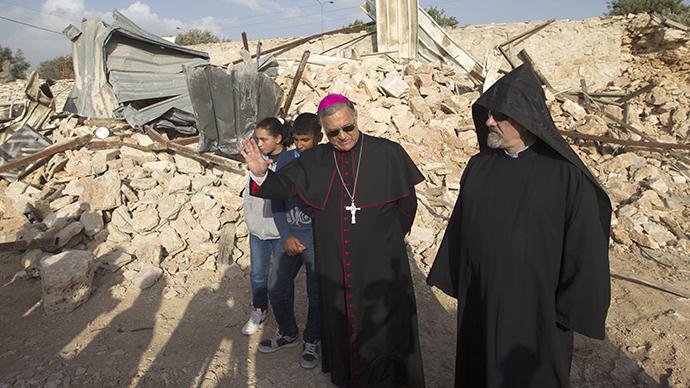 Does this sound like anything you have heard or read in the last year or so?

Time for Christians to get off this soapbox of some fictional occurrence from some unproven historical outlook and realize that Christians are NOT wanted in the Holy Land…….your dollars are fine….but your religion has to GO!

STOP! Letting some religious promise blind you to reality!

Since the Arab Spring caught fire in Syria there has been a wealth of stories flying around news sources……many of them are nothing more than propaganda to ensure that the US would be ass deep in the region yet again.

And then the war hawks latched onto the conflict for they saw a chance to make their masters in the M-IC extremely happy…..

Some of the stories were actual fact and others were just fairy tales to make an industry slobber all over themselves……let’s talk about some of the fairy tales…..

“Sometimes horrific things happen in the Middle East irrespective of American power. Sometimes our involvement can only make them worse.”

Source: The Neoconservatives’ Fairy Tales about Syria | The National Interest