My last post of the day is a personal one……and not something I usually pay much attention to on any given day….but this story got me to bitching!

I served in the US Army from 1967-1971…..in a war that was just sucky……and in that time when I traveled I wore my Army dress greens (and I did cut quite a dashing figure if I do say so)…….But I got some sad news over the weekend……

I am and was proud to wear my green uniform…..it will always be the ONLY dress uniform for the US Army, in my opinion.

Without much fan fare and probably means very little to anyone that did not wear the uniform….the Army is retiring the uniform that made me a dashing figure when worn……

The dark green Army service uniforms—the standard for soldiers and generals alike from the Vietnam War to the war in Iraq—received their dishonorable discharge Thursday, the Army Times reports. The “Green Class As” were increasingly unpopular with the troops, not least because they were made of stiff polyester that had gone unchanged since the 1970s. But don’t worry; the Army isn’t shaking things up too much. Blue uniforms, which became standard issue in 2010, will now permanently replace the greens.

The Green Class As—dark green jacket and pants, light gray undershirt, black tie—were introduced in 1954 to give the Army a “sharp, classic, and dignified look” following WWII, the Army Times reports. The dark green color was a recommendation from scientists and fashion experts. The Army hoped the new uniforms would return “dignity and prestige” to the military after every Tom, Dick, and Harry started wearing the previous olive and tan uniforms in the years after WWII. The new blue uniforms are a callback to those worn by the Army between the Revolutionary War and the Spanish American War.

This sucks……awhile back the Army took the black beret a way from the Rangers and made them wear a tan one instead….as a past Ranger (but default not by choice) I think it sucked!

Now they will replace another Army icon with a sub standard replacement…..a blue uniform?  The Air Force wears blue…NOT THE ARMY!

Why does the Army have to give up its traditions?  Make the ones that do not do the heavy lifting make a change.

Grab your junk and settle back into that easy chair…..time for the professor’s history lesson of the week…..

I do a mental exercise on occasion…..I take a historical event and using known parameters I take the situation and apply a “what if” to it….like if Hitler would have been accepted to the school he applied to would he have become the maniacal toad?  It is just an exercise something I do to try and keep sharp…..I also did Castro…..what if he had been signed as a pitcher by the team he tried out for…..would he have then lead a revolution?  Like I said….it is a mental exercise I do……

From time to time I like to give my readers a little history, a perspective that they may not necessarily be exposed to in their daily lives…..in this way I hope that my reader will gain a little understanding of what is what and how with a minor adjustment things could have been different.

Today let’s talk about the Middle East and World War One……this was the days of Lawrence of Arabia and the Ottoman Empire who had sided with the bad guys of the day, Germany and Austro-Hungary……

At the end of the Great War the allies decided that they would slice up the Middle East among themselves, mostly France and the UK…..you see the allies had made a pact to do so and by passed the Arabs that they had made promises to and decided that they would not honor those promises (a great bunch, those allies)…..the document that sliced up the region was called the Sykes-Picot Agreement…..and the crap began.

Each country in today’s Middle East is an artificial entity whose borders were conceived by foreigners like Gertrude Bell and T.E. Lawrence……they tried to placate the Arabs by given the kingship of Syria to Prince Faisal of the House of Saud….that did not take and the French removed him but the British made him the king of Iraq…..and as they say….the sh*t hit the fan and has been doing so every since.

To be honest the region was never as quiet as one would hope….there were revolts within the region when the Ottomans ruled….like the revolt in Lebanon in 1860 or the Druze Rebellion of 1909 to mention only a few…..the region has had its problems for a long time….but nothing like today.

With that short simplistic history lesson a question has been asked…..a “what if” if you will……..

If Turkey had remained neutral during WWI, would the Middle East be a better or worse place, or simply different?

History is a marvelous thing…….especially in the Middle East……the more you know the more you are confused.

And what better way to add to your confusion that an image of the geopolitical situation in the Middle East? 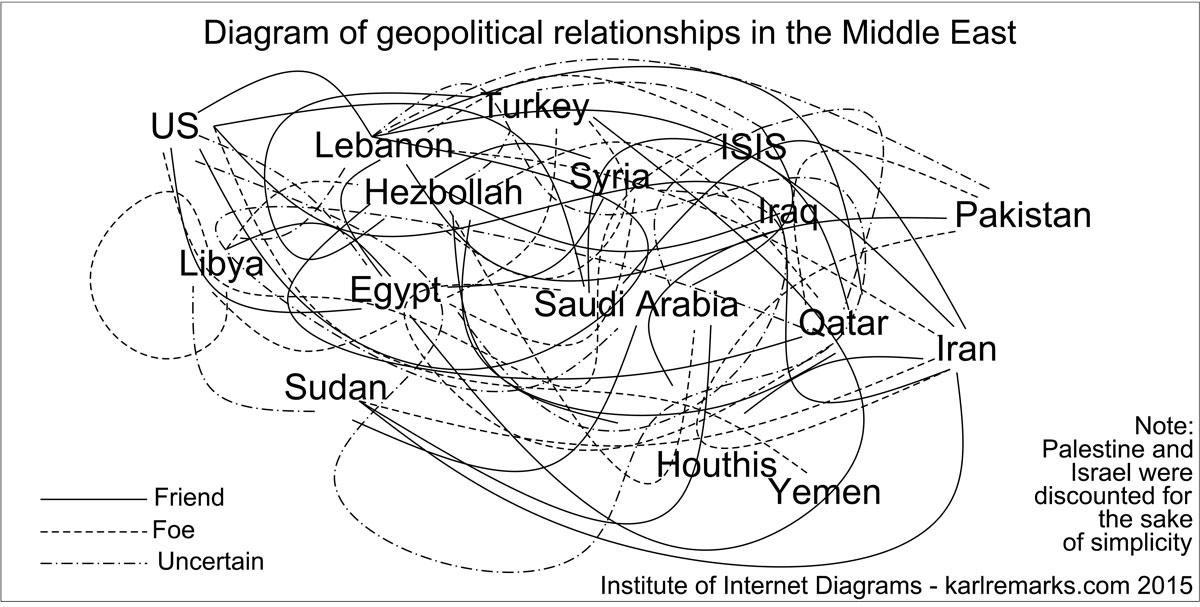 I recall about a year ago the media was pushing Clinton as the Dem nominee…..and then her e-mails became the story and she slowly slid down in the polls and the media was caught flat footed….I am her only rival is Bernie and god forbid that they get behind him for he is a……socialist (said under their breath)……..

The scramble was on…..who to make the story about now that Hillary is becoming more and more unpopular……enter our man in DC…Joe Biden.

The MSM now has a new fave that they can push and push….even though he has not decided one way or the other…..that matters not….the media wants him and they will push him until he decides to make them happy……

Personally, not a big fan of Clinton…..Joe would be my fave if Bernie was no longer present……but does Joe have any advantages if he decides to run?

Now would be a good time for Joe Biden to enter the 2016 race. Sure, he’d lose the element of surprise come debate time, but he’d pop up as the most popular candidate according to a recent poll. The survey from NBC News and the Wall Street Journal, taken from Sept. 20-24, shows 40% of Americans view Biden in a positive light, compared to 28% who see him negatively. That equals a favorability rating of 12. Bernie Sanders is next with 10, followed by Ben Carson with 8, Carly Fiorina at 7, Hillary Clinton at -8, and Donald Trump with -33. Biden would also have the upper hand in a match against Trump, besting him by 19 points. Sanders would defeat him with a 16-point advantage, while Clinton would be up 10 points. When it comes to all other GOP candidates, however, Clinton is plus or minus one point, the poll shows.

Biden, meanwhile, would defeat Jeb Bush and Carson each by eight points and Fiorina by six points. Of course, things would likely change if he chooses to run. A pollster notes “history has shown that the public has a much harsher filter when people become candidates,” and most of the focus on Biden is currently on his decision to run after the tragic death of his son, which draws sympathy. Biden now has the support of 17% of Democratic primary voters, compared to 35% for Sanders and 42% for Clinton, and he appears to take support almost entirely from Clinton. With Biden out of the race, Clinton would improve to 53% over Sanders’ 38%. The poll also shows support for Bush as the top pick for the GOP nomination has fallen from 22% in June to 7%, per the Journal. Half of GOP primary voters name Fiorina, Carson, or Trump as their top choice.

If Joe runs….how will he do?  My guess is pretty good considering the front runners of the GOP……

For some time now I have questioned……… what has happened to any substantial anti-war movement in the US?

We are involved in so many armed conflicts that someone should be demanding that there be some sort of accountability for these actions.  But instead we get nothing….the media is especially involved in a propaganda war to help keep the people from protesting these wars….

Really?  The American people are okay with a war that has continued for 14 years with NO end in sight.

Personally, I liked it when Americans stood up with balls and ask the hard questions of the government over their necessity to fight wars……the War on Terror has the exemption of accountability….

Recently a question was asked by an Afghan student….read on…..

Source: A Question From Afghanistan, ‘Can We Abolish War?’ « Antiwar.com Blog

Amazing!  A young Afghan woman asked the hard questions while the adults scratch their ass and throw bombs…..

As a veteran of Vietnam and a staunch anti-war protester when I returned home….I have worked in the anti-war movement for many years that is until age and handicap got in my way…..and I still believe that there are alternatives to war in most cases.

I have used all the slogans that you may be aware of from the past……but now with our newest, longest war I am finding myself thinking seriously about the anti-war movement again…..since Vietnam it has slowly been replaced with that BS concept of American Exceptionalism….plus a tightly controlled media that is acting as a propaganda tool of the government…..they do not report on any of the wars unless there is no way around it and then only a bare minimum of information…..

I have asked many times what has happened to our anti-war movement…..we are fighting more wars than ever before and yet there is very little in the way of protests of those wars…..why?

Where Did the Antiwar Movement Go? by Tom Engelhardt — Antiwar.com.

And now I find myself considering an unthinkable position in my youth….the draft….I have written several pieces on the concept…..

Source: Why No Draft? | In Saner Thought

Then there is a op-ed I wrote for Ace News Room……asking a question about the draft…….

I worries me that I am considering such a thing…..especially after I worked so hard to battle the draft in the past…..but the way that our country is choosing to fight almost willy-nilly…..it gives me cause for lots of concern…..

Source: David R. Henderson, Would a Return to Conscription Substantially Reduce the Probability of War? | Library of Economics and Liberty

I know there are many links within my post but I am trying to make my case…..we need to revive the anti-war movement…..how to do that is still a mystery….but we cannot give up on the ideals that so many had worked for in the past.