Well yes it does.

Okay what the Hell am I going on about, right?

All the dumbass Repubs that went around without a mask just to keep Trump with a woody…are coming down with the virus…..they are dropping like flies…..and as bad as it could be Donald the Orange still spouts bullshit and platitudes…..

Moments after leaving Walter Reed Medical Center and returning to the White House Monday night, President Trump recorded what CNN refers to as a “campaign-style video” on Twitter. “Don’t be afraid of [coronavirus], you’re gonna beat it,” a maskless Trump says in the video. “We have the best medical equipment, we have the best medicines, all developed recently. And you’re gonna beat it.” Trump also echoed other sentiments he had tweeted about earlier Monday, insisting that he could have left the hospital two days earlier than he did and that he feels even better after treatment than he did 20 years ago. “And now I’m better, and maybe I’m immune, I don’t know,” he said, insisting multiple times that people not let COVID-19 “dominate” their lives. A vaccine, he added, will be available “momentarily.”

The video set off a firestorm, just as his earlier tweet had; the AP rounds up some reactions from virus survivors and those who’ve lost loved ones. “I’m so glad that he appears to be doing well, that he has doctors who can give him experimental drugs that aren’t available to the masses,” says one survivor. “For the rest of us, who are trying to protect ourselves, that behavior is an embarrassment.” An epidemiologist echoed that sentiment: “The president has access to the best medical care in the world, along with a helicopter to transport him to the hospital as needed.” And one of the medical professors who spoke to CNN says of the video itself, “It is inexplainable that the President of the United States, who is actively shedding virus in millions of particles, would walk into that building with an enormous number of staff, unmasked.” The AP also rounds up anonymous Secret Service agents and White House staffers who are increasingly upset about the White House’s lax safety policies—and increasingly concerned for their own health. 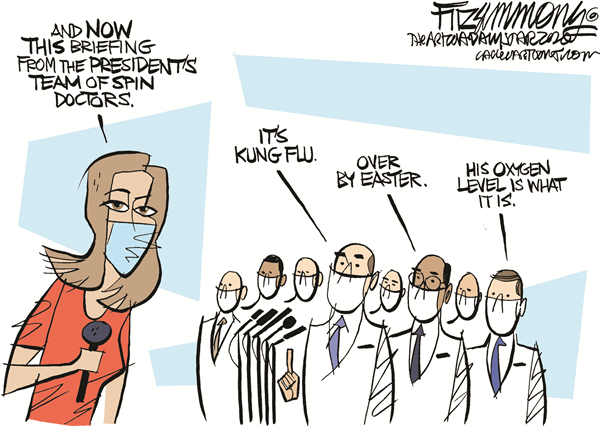 But not to worry…..all these spineless parasites get top notch medical care not like you and me that have to wait and see if we are symptomatic…..but there is a way to make it more equal and balanced……

The case for Medicare for All was once again made by the consequences of the coronavirus pandemic, Sen. Ed Markey tweeted on Sunday, after Republican politicians were able to check themselves into hospitals shortly after announcing they had tested positive for Covid-19.

Markey noted that throughout the coronavirus pandemic, in which more than 7.4 million cases have been detected and more than 209,000 people in the U.S. have died, people have attempted to get care at hospitals after testing positive and showing worsening symptoms, only to be turned away and “told only to come back when they could not breathe.”

No one person’s health is more important than others….

Listening to all the “reporting” on this election and of course we hear about the white vote, the black vote and the Latino vote….but is this a true analysis or is it just words to fill the report when there is a lack of substance?

I heard this morning that the Latino vote would help Biden……but is there truly a Latino vote?

With only 42 days left until the election, Joe Biden has his work cut out for him with Latino voters. That’s according to his senior adviser Symone Sanders, who has had to answer for why Biden appears to be losing ground among Latinos. According to a recent Latino Decisions/National Association of Latino Elected and Appointed Officials poll, 65 percent of Latinos plan to vote for Biden or lean toward him, but this is still 14 percentage points lower than the 79 percent of Latino voters who said they supported Clinton in the pollster’s national election-eve poll in 2016.

It’s true that Latino voters do, as a whole, tend to be more Democratic than Republican, a trend that has only accelerated in recent years. But they don’t vote as a single bloc (in 2016, at least 1 in 5 Latino voters still backed Trump): How Latinos vote in Florida, for instance, can be very different from how Latinos in the Southwest or Northeast vote. These differences especially matter due to the size of the Latino population in a number of key swing states.

There’s No Such Thing As The ‘Latino Vote’

Polls are about as worthless as teets on a boar…..they are seldom correct for respondents seldom tell the true to the questioners.

Trump does not have some 14 point plan for the world…..he is a racist almost as bad but not as blatant as Wilson……none of that is what this is about….nope….it is about his health in the White House.

The news over the weekend was that Trump was taken to Walter Reed….

President Trump was admitted to Walter Reed Medical Center outside Washington on Friday evening to be treated for COVID-19—a stay that aides said they expect to last a few days. Administration officials said that the president was in good spirits, the Washington Post reports, but that his symptoms had worsened during the day. Those symptoms include low-grade fever, a cough and nasal congestion. Trump is fatigued, his physician said, per the AP. First lady Melania Trump, who also tested positive for the coronavirus, tweeted that she’s dealing with mild symptoms but is “overall feeling good.”

So just how is this similar to the Wilson time in the White House?

President Woodrow Wilson, who had just cut short a tour of the country to promote the formation of the League of Nations, suffers a stroke on October 2, 1919.

The tour’s intense schedule–8,000 miles in 22 days–cost Wilson his health. He suffered constant headaches during the tour, finally collapsing from exhaustion in Pueblo, Colorado, in late September. He managed to return to Washington, only to suffer a near-fatal stroke on October 2.

Wilson’s wife Edith blamed Republican opponents in Congress for her husband’s stroke, as their vehement opposition to the League of Nations often took the form of character assassination. Edith, who was even suspicious of the political motives of Vice President Thomas Marshall, closely guarded access to her husband. She kept the true extent of Wilson’s incapacitation from the press and his opponents. While Wilson lay in bed, unable to speak or move, Edith purportedly insisted that she screen all of Wilson’s paperwork, in some cases signing Wilson’s name to documents without consulting the convalescing president. Edith, however, denied usurping her husband’s position during his recovery and in her memoirs insisted she acted only as a “steward.”

Similarities are there……Wilson downplayed the 1918 pandemic and got ill…..

Initially, the Wilson administration tried to play down the disease even as it spread worldwide.

Presidential historian Tevi Troy, citing the administration’s response to the pandemic, calls Wilson the worst U.S. president in terms of handling a disaster.

“The federal response to the influenza outbreak in 1918 can best be described as neglectful. Hundreds of thousands of Americans died without President Wilson saying anything or mobilizing nonmilitary components of the U.S. government to help the civilian population,” Troy writes in “Shall We Wake the President: Two Centuries of Disaster Management from the Oval Office.”

If Trump is incapacitated will FLOTUS step up as Mrs. Wilson did?  (Sorry that is rhetorical)

This is a person who knows how to manipulate the public’s perception and for that reason I am a bit skeptical of any news coming from the White House for even his people are becoming expert liars.

Will Trump join the ranks of leaders like Wilson?

I could turn that into some sort of comedic skit…but I will leave that for the professionals…..

Since 1979 and the fateful day when the Iranians took over the US embassy in Tehran there has been some sort of sanctions placed on the Iranian government.

Now we are placing sanctions on Syrians as well.

This time it is some guy that is a friend of Assad’s brother…..and he was targeted for war profiteering….

The Treasury Department imposed sanctions today on Syrian war profiteer Khodr Ali Taher and 11 of his companies – part of the fourth set of designations since the Caesar Act went into effect this past June. The targeting of Taher, a protégé of Bashar al-Assad’s younger brother Maher, is consistent with U.S. efforts to target the Assad family and its closest confidantes, especially the young entrepreneurs who have helped the regime take advantage of war-related business opportunities.

Taher rose to prominence after he began working with Syria’s 4th Armored Division, over which Maher al-Assad exercises control. The 4th Division’s security bureau, which handles its business affairs, began contracting with Taher in 2016 to protect its convoys. The firms Treasury sanctioned today include Castle Security and Protection LLC, which Taher founded in 2017 to manage his protection business. According to Treasury, the firm also operates lucrative checkpoints that collect fees from those crossing the front lines or the border with Lebanon.

That was a report from a Neocon site…..now I ask what do you call Halleburton, et al?

Does that not sound a bit hypocritical?

Now my question is…why is the US the only nation that can participate in free enterprise all others are war profiteers?

Those are rhetorical questions since I understand the concept of might makes right and the US tries to make its own rules.