A little humor for this Sunday….this is those wacky guys at Bad Lip Reading…..and their dealing with a 2020 presidential debate….

Enjoy a little humor on this Autumn Sunday.

I seldom do many reviews but in this case I will make an exception…..

You see I am an old fart and remember this trial well…..the Netflix handling of this historic trial was good and even sort of accurate……but they did state that it was “based on an actual incident”……but first…..who were the Chicago 7?

Initially there were eight defendants (and the group was known as the Chicago Eight), but one, Bobby Seale of the Black Panthers, denounced Hoffman as a racist and demanded a separate trial. The seven other defendants, including David Dellinger of the National Mobilization Committee to End the War in Vietnam (MOBE); Rennie Davis and Tom Hayden of MOBE and Students for a Democratic Society (SDS); and Jerry Rubin and Abbie Hoffman of the Youth International Party (Yippies), were accused of conspiring to incite a riot at the 1968 Democratic National Convention.

Here are the two trailers….

I followed the story in ’68 as best I could for I was ass deep in mud and rain in South Vietnam…..so if I had been stateside I might have been in Chicago…..so I will let someone who was there at the protests and at the trial…..Nancy Kurshan……this is her review of the Netflix film and her thoughts on the trial.

Aaron Sorkin’s The Trial of the Chicago 7, streaming on Netflix, is entertaining, sometimes moving and often funny. But it played fast and loose with the facts. I ought to know. I was a yippie organizer for the ’68 protest and present every day at the trial, working on the defense side— in the beginning with Tom Hayden, tracking down witnesses. As the nature of the trial morphed, I became the “yippie props gal”. I acquired the robes that Jerry Rubin and Abbie Hoffman wore to court in Sorkin’s movie.

Although the actors were great, Sorkin failed to reflect the essence of many of the characters. He showed Jerry as a violence-provoking buffoon, one who let a female FBI agent get close to him in the midst of what we had put our hearts and souls into for much of the year. The only woman that was next to him the whole time was me. And I knew Jerry’s faults as well as anyone which is finally why I left him. But I also knew his strengths. He had tremendous courage. Not Rambo courage. It was ridiculous to see him in the film talking about molotov cocktails. He couldn’t even make a smoothie. But he was brave. He stood up 3 times to the House Unamerican Activities Committee (HUAC). All times in costume. First as a revolutionary war hero with tri-corner hat and all, then as an international guerrilla, and finally as Santa Claus. (It was Xmas time, and the headlines read HUAC BARS SANTA.)  Many times bravery involves being able to put yourself out there, even if you are scared, to be outspoken and fight for what you think is right. Jerry had been a journalist and knew how to work the media to expand the movement. He developed theatrical politics and was a creative, brilliant tactician of protest. He helped lead the earlier protests against the war. It was largely his vision, as the Project Director, that guided the 1967 attempt to SHUT DOWN the Pentagon through both levitation and huge civil disobedience action against the war where 800 of us were arrested.

I Was in the Room Where It Happened: One Woman’s Perspective on “The Trial of the Chicago 7”

I liked the film…not so much for its accuracy but it reminded me of my youth and my days of protests and the injuries my protesting lead to in later years.

Keep in mind that the 7 were protesters and Bobby Seal was on trial at the same time for murder….that made it 8 defendants….a small fact but important nonetheless…..

Now spend some time an watch a documentary of the trial and the actual events….it is lengthy but well worth the view for those interested…..Chicago 7 +1 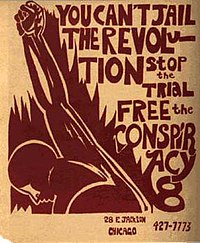 This is another look at the Netflix offering……

Aaron Sorkin’s The Trial of the Chicago 7 is a historical drama streaming on Netflix. It deals with the court proceedings in 1969–70 in which organizers of protests at the 1968 Democratic National Convention, held in Chicago, faced charges of conspiracy and crossing state lines with the intent to incite a riot. The charges brought by the Nixon administration’s Justice Department were aimed at intimidating and criminalizing political opposition.
(does that at all sound familiar?)

For Paul Atreides of “Dune” fame, it was fear that was the mind killer….but we have gone further…..and in my opinion is far more dangerous than simple fear.

I have never been a fan of what is called “social media”……I think it is the most mind numbing activity a human can delve into….me I use Twitter as a news feed with very little interaction other than a few friends…..social media is being used to feed the wild thoughts and hopes of insane morons and lazy d/bags…..and then there is the so-called “influencers”…..A social media influencer is someone who wields that influence through social media. The form of influence can vary and no two influencers are the same. The right influencer can reach your target audience, build trust, and drive engagement. They create original, engaging content.

Schmidt’s remarks came during an interview at a technology conference hosted by the Wall Street Journal just a day after the Justice Department announced the landmark case.

“The most obvious candidate for regulation are the excesses in the social-networking space,” said Schmidt.

“The concept of social networks, broadly speaking, as amplifiers for idiots and crazy people is not what we intended,” he said, adding, “Unless the industry gets its act together in a really clever way, there will be regulation.”

The former executive’s comments came amid growing questions about efforts social media platforms including Facebook and Twitter have made to promote or censor news stories and hate speech and to control misinformation.

These so-called “influencers” are slowly destroying the system that took 200+ years of work….and they are NOT all that….some spread lies and conspiracies that have NO foot in reality.

I think that the rise of social media has plunged us into age of darkness……and propaganda…..as you might imagine I have given my thoughts of this as well….in essence social media is killing the mind and the processes needed for rational thought.

Yes I am an old fart….and this is basically my social networking scheme….

Sunday and I am still working with massive drafts I was holding for a later date…..and that date is now…..

I am sure we all have heard the comment about someone that may seem that they are not all there (whatever that means)……but could there actually be something under the comment?

So how does consciousness actually work?

A team of scientists thinks they’ve finally arrived at a model of how consciousness works in the human mind — and in doing so, may have settled a 1,500-year-old debate.

The big issue is whether consciousness is continuous or discrete: Basically, scientists and philosophers have long argued over whether we’re conscious all the time or only during concise moments. In an opinion piece published Thursday in the journal Trends in Cognitive Sciences, the scientists say it’s a little bit of both — and their verdict could free scientists of various disciplines up to do their work without butting heads.

The scientists, all psychophysicists at Switzerland’s Ecole Polytechnique Fédérale de Lausanne (EPFL), said that there’s a two-step process going on. While our brains are continuously processing information behind the scenes in more of an “unconscious” manner, we’re only actively conscious of that information during discrete moments.

Now you know that you are not as aware as you think you are…..and this explains the lack of clarity and the complete breakdown of information.