It is October and Halloween approaches….some Americans use to have costume parties or as they were called masquerade balls.

It is the weekend and once again FYI will prevail….and in doing so I get to use some history to inform and entertain.

So just where did the idea of a “masquerade ball” come from and when?

Keep in mind they were not always the elegant matters that we see in the movies…..

Dating back to the 14th and 15th centuries, the Masquerade Ball began as part of Europe’s carnival season. Less high society and more cirque du célébration, villagers would gather in masks and costumes to take part in elaborate pageants and glamorous processions.

Quickly spreading across France like wildfire, some of the most notorious balls of the day would be held to celebrate Royal Entries: the grand occasion of welcoming kings and queens into their cities.

In fact, so audacious were the masked balls that in 1393, Charles VI of France held the first ever “Bal des Ardents”. Translated as “Burning Men’s Ball”, the event transformed the more orthodoxly decadent costume ball into a night of intrigue and risk.

In celebration of the marriage of the queen’s lady in waiting, King Charles and five of his bravest courtiers dressed in masks and flax costumes and danced the night away as wildsmen of the woods.

The only catch was that if your sashaying edged you too close to one of the many flaming torches that lined the dance floor, your look would be smoking–and not for the right reasons.

The Glamorous And Gruesome History Of The Masquerade Ball

This “Ball” season may not be all it should be thanks to the pandemic and people avoiding crowds to protect themselves and their families.

Now you know where this idea originated and when……

Have you heard this term before?

Well this is not some project to come up with a warp engine for our space exploration……NO……it is Pres. Donald the Orange’s attempt to look and sound like he has the pandemic in his sights.

This con job is for the vaccine he keeps promising the country will be available soon….very soon if you believe his bullshit.

Vox has taken an in-depth look at Operation Warp Speed…..

A Covid-19 vaccine could be approved in record time, thanks to an unprecedented mobilization by the federal government and private sector — but it almost certainly isn’t coming before Election Day, as President Donald Trump has suggested throughout the year that it could.

Instead, drug makers and public health experts think early 2021 is a more likely timeframe for the rollout of a vaccination campaign.

Trump had clung to the speedy development of a vaccine as the best hope for ending the coronavirus pandemic and for boosting his reelection chances — and his administration’s Operation Warp Speed can claim some credit for the rapid scientific advancements that we have seen over the last eight months.

I have watched about a ga-zillion TV docs that try to say they are on the track of the Russian Amber Room looted by the Nazis in 1942…..wait!

What the Hell is the Amber Room? 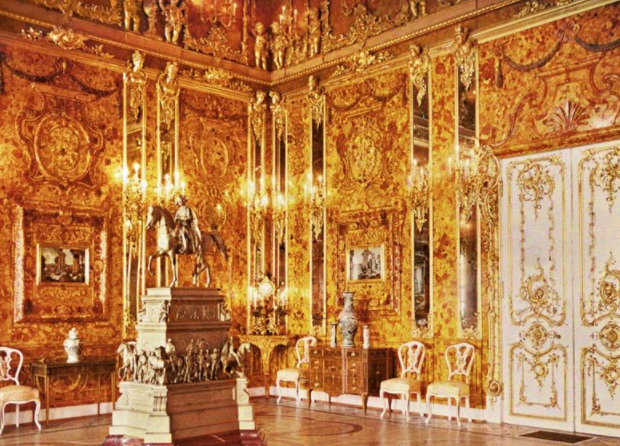 Construction of the Amber Room began in 1701. It was originally installed at Charlottenburg Palace, home of Friedrich I, the first King of Prussia. Truly an international collaboration, the room was designed by German baroque sculptor Andreas Schlüter and constructed by the Danish amber craftsman Gottfried Wolfram. Peter the Great admired the room on a visit, and in 1716 the King of Prussia—then Frederick William I—presented it to the Peter as a gift, cementing a Prussian-Russian alliance against Sweden.

The Amber Room was shipped to Russia in 18 large boxes and installed in the Winter House in St. Petersburg as a part of a European art collection. In 1755, Czarina Elizabeth ordered the room to be moved to the Catherine Palace in Pushkin, named Tsarskoye Selo, or “Czar’s Village.” Italian designer Bartolomeo Francesco Rastrelli redesigned the room to fit into its new, larger space using additional amber shipped from Berlin.

Now you know and there have been treasure hunters looking for it since the end of the war, that is WW2…..some say it was destroyed by Russian artillery barrage….others think it is somewhere in a cave in Western Poland….and others think it was shipped to Germany and stored for later plunder.

This last story that I recall was that it was in a cave and that some “hunters” using the top notch equipment have located it…..

Third Reich scientists used the cave complex during the war – but all records of just what went on there have mysteriously vanished from local archives.

Lohr used specialist radar imaging to detect underground booby traps and what appear to be bunkers under the soil.

He scanned the hill in September after Lohr claimed a “reliable source” told him of the missing treasure’s whereabouts in 2001.

That was three years ago and so far no news that the artifact has been located.

Divers say they have found a shipwreck that could solve one of World War II’s most enduring mysteries: The fate of the dazzling Amber Room looted from a Russian palace by Nazi soldiers. The Polish divers say they have found the wreck of the Karlsruhe, a cargo steamer that was sunk with a heavy cargo in 1945 after leaving Koenigsberg, the last known location of the dismantled chamber, reports Reuters. Records show that the Karlsruhe left the port in a hurry during the evacuation of East Prussia. It was sunk by Soviet warplanes off the coast of what is now Poland. Diver Tomasz Stachura says the wreck is almost intact. “In its holds we discovered military vehicles, porcelain and many crates with contents still unknown,” he says.

“The history and available documentation show that the Karlsruhe was leaving the port in a great hurry and with a large load,” says diver Tomasz Zwara, per UPI. “All this put together stimulates the imagination,” he says. “Finding the German steamer and the crates with contents as yet unknown resting on the bottom of the Baltic Sea may be significant for the whole story.” It’s not clear when divers plan to return to the site. The room, donated to Tsar Peter the Great by a Prussian king in 1716, was looted from St. Petersburg’s Catherine Palace in 1941. A reconstruction at the palace was completed in 2003.

Still NO concrete evidence that it has been located….but these treasure hunters just want to keep hope alive.

As long as we are talking about “legend”….is it possible that Nessie has been located in the Loch?

The object picked up by sonar technology is said to be ‘solid and pretty big’ sonar contact.

It measures around 10m and was detected by a boat owned by Cruise Loch Ness, in Fort Augustus, Scottish Highlands.

The mystery creature is likely to feed on trout and eels at the bottom of the loch, which has the largest volume of freshwater in Britain.

Director Ronald Mackenzie, 48, said: “Who knows what it is, there is quite a lot of fish at the bottom of the loch, there is carnivorous trout and eels.