What Happened To The Moderate Republican?

That was a question I was asked recently by a friend and it got me to thinking about the disappearance of this political beast.

Back in the Dark Ages of American politics there use to be moderate Repubs and yes even some they would call “liberal” Repubs….those days are gone and it looks like for good.

Over a decade ago here on IST I looked at moderate/liberal Republicans…….https://lobotero.com/2009/07/17/is-there-a-liberal-republican/

That post set up what to look for in a Repub candidate to see if they pass the test…..today’s crop there is NO such thing…..plenty of Neocons that are against Trump policies but that is because they loss control of the party not a change in stands.

The site fivethirtyeight.com has taken a look at the lack of moderate Repubs…..

So if Republicans were to lose on that scale — the House, the Senate and the presidency — that raises the question: Would the GOP change course?

This is a question I’ve thought about a lot, and it’s one of the reasons why I argue in my book, “Breaking the Two-Party Doom Loop,” that America’s two-party system is failing us. With the two parties now fully nationalized, deeply sorted by geography and culture, and locked in a tightly contested, zero-sum battle over “the soul of the nation” and the “American way of life,” it’s nearly impossible to break that cycle. And so I think it’s unlikely that Republicans will become more moderate even if they were to take the shellacking I’ve outlined above.

The problem is that political parties are not singular entities capable of easily changing course. They are, instead, a loose coalition of office-holders, interest groups, donors, activists, media personalities and many others, all jockeying and competing for power. Think of a giant tug of war in which all the tugs have been toward more extreme and more confrontational versions of the party.

Why There Are So Few Moderate Republicans Left

I do not see a change for the GOP no matter the outcome of the vote in 2020….there still way too many haters for the party to change…..but a better question is…will the GOP survive 2020?

Some believe that the GOP can redeem itself when Trump leaves office……I am not one of them…..

But defeat — no matter how large or ignominious— probably won’t redeem the GOP, nor cure it of its Trumpist excesses.

A landslide victory for Democratic candidate Joe Biden “would turn the Trump era of nihilism, tribalism, and cruelty into a cautionary tale of extremism, illiberalism, and, above all, failure,” Andrew Sullivan wrote last week. He added: “And a landslide is the only thing that can possibly, finally break the far right fever that has destroyed the GOP as a legitimate right-of-center political party, and turned it into a paranoid, media-driven, fact-free festival of fear and animus.”

What are your thoughts?

AS the election of 2020 draws closer and some people still are not sure who they will vote for (doubt that assumption but I can hope) so I try to help all those uncommitted voters learn the issues and where the two stand…..

My main concern is foreign policy and that will include defense and national security issues as well….this post will look at where Trump/Biden stand on these issues.

U.S. President Donald Trump: The Trump administration has withdrawn the U.S. from the 2015 Iran nuclear deal and the 1987 Intermediate-Range Nuclear Forces Treaty, and (almost) the 1992 Open Skies Treaty. It has loosened the Missile Technology Control Regime’s restrictions on selling armed drones to foreign governments amid concerns about China’s defense relationships in the Middle East. As of press time, administration officials have been unwilling to extend the 2010 New START nuclear pact with Russia, which expires in February, insisting that a new version include Russia’s growing arsenal of tactical nuclear weapons and China, whose smaller arsenal is rapidly expanding and which appears unwilling to sign such an agreement.

Former U.S. Vice President Joe Biden: Favored by arms control advocates, Biden has promised to renew New START and would likely accept Russia’s offer to extend it five years without preconditions. He also said he would rejoin the Iran nuclear deal if it returned to full compliance described in the agreement. While Trump has loosened restrictions on the use of landmines by the U.S. military in conflict areas, Biden has said the move unnecessarily puts civilians at risk and that he would reverse it.

Defense News has taken a look at both candidates and positions…..the subjects covered by Defense News…

These are subjects that need to be addressed by the candidates….but since both are too busy trying to make the other look bad…..

I like Trump’s stand on bringing troops home…just not convinced he will do it after election.  Biden will end wars but leave troops in place….what part of that is the end?  Don’t like Biden’s explanation.

Dislike Trump’s selling arms to anybody with a checkbook….and Biden has not said a whole lot so none of his thoughts are up for analysis.

I like Biden’s idea of repairing alliances but not any expansion of NATO.

Both are on record as a extreme dislike for China but all they have is sanctions and stuff……not going to change a damn thing.

As you can see why I have a dilemma since foreign policy is a major driving force in my vote…..for neither candidate impresses me with a hard good agenda in world affairs.

The hearing for the newest nominee for the Supreme Court is being held as I type…..I also thought that a small idea of the theatrics might be amusing for my readers….(this may be the only post I do on this silly game)….

The actual questioning of Supreme Court nominee Amy Coney Barrett has begun on Capitol Hill. However, Barrett is following the tradition of nominees not answering questions about how they might rule on key issues—in this case, ObamaCare and abortion, notes Politico. “If I give off-the-cuff answers, then I would basically be a legal pundit,” she said. “I don’t think we want judges to be legal pundits. I think we want judges to approach cases thoughtfully with an open mind.” Some highlights:

The Dems are still playing to the camera….they do not have the votes to block this silly pathetic endeavor so their acting is moot.

Yet Another topic that I have strong opinions about……https://lobotero.com/2020/09/23/dems-need-to-buck-up/ 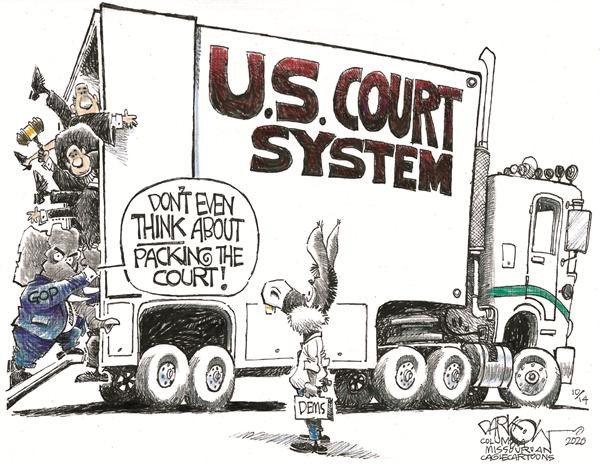 Even her colleagues think she should step back…..

We write to you as fellow faculty members at the University of Notre Dame.

We congratulate you on your nomination to the United States Supreme Court. An appointment to the Court is the crowning achievement of a legal career and speaks to the commitments you have made throughout your life. And while we are not pundits, from what we read your confirmation is all but assured.

I see that Donald the Orange has once again used his favorite tool for international situations….sanctions.

This time it is sanctions used against Iran….again.

The US slapped new sanctions on Iran’s financial sector on Thursday in an attempt to further isolate the Islamic Republic’s economy. The new measures target 18 Iranian banks and subjects foreign, non-Iranian institutions to penalties for doing business with them.

“Today’s action to identify the financial sector and sanction 18 major Iranian banks reflects our commitment to stop illicit access to US dollars,” US Treasury Secretary Steven Mnuchin said in a statement.

The move comes after Washington’s European allies have been warning of the humanitarian consequences sanctions can have on Iran. The country is already facing an economic crisis due to previous US sanctions, which has been exacerbated by the coronavirus pandemic.

European countries have been at odds with the Trump administration over its Iran policy. The US has been trying to enforce measures agreed to under the 2015 nuclear deal, an agreement the US withdrew from when it reimposed sanctions on Iran in 2018.

The US says the new sanctions do not apply to transactions that involve food or medical supplies. But the sanctions will discourage foreign banks from doing any business with Iran, including humanitarian deals. Sanctions imposed on Iran since 2018 also technically have exemptions for humanitarian goods, but have caused things like medicine shortages.

The new sanctions came just a day after Iran reported its highest number of daily deaths due to coronavirus. Iranian Foreign Minister Javad Zarif responded to the new sanctions on Twitter. “Amid Covid19 pandemic, US regime wants to blow up our remaining channels to pay for food & medicine,” Zarif wrote.

I am not a big fan of sanctions…I believe they should be used only as a deterrent…..I dislike them for they usually hurt innocent people more than the intended recipients.

I have written my feelings about sanctions…..https://lobotero.com/2019/02/05/sanctions/

Sanctions are a cheap way to try and get the targeted nations to play ball with what the US wants…..but just how effective are they?

The imposition of sanctions is a relatively inexpensive political instrument compared to armed conflict, and is more popular with the public. However, when a sanctions regime is promulgated, it is impossible to determine the exact level of measures that must be taken in order for sanctions to have an impact on the policy of the sanctioned state.

I still do not think that sanctions accomplished their intended conclusion……and do more harm than good.

So are these sanctions really all that good?

The genesis of the maximum pressure campaign as articulated by former national security adviser John Bolton and hawkish think tanks like the Foundation for Defense of Democracies, was founded upon a simplistic but appealing narrative: the Iranian Islamic regime has grand designs on the Middle East, including a kind of 21st century colonization that would swallow the region whole. Because this narrative was already fully entrenched in Washington’s security and intelligence establishment, it was a relatively easy one to sell to an administration staffed to the gills with Iran hawks.

The main theoretical assumption underlying the maximum pressure campaign was as shallow as it was tempting: pummel the Iranian economy with so many restrictions that the ayatollahs would have no choice but to crawl back to the table on their hands and knees and negotiate a new agreement on Washington’s terms.

However, knowing that caving to U.S. demands would leave it highly vulnerable to similar tactics in the future, the Iranian government has held firm to its original position: if the U.S. wants to talk about a bigger and better deal, it must first re-enter the original Joint Plan of Comprehensive Action (JCPOA) and compensate Tehran for its losses. The Trump administration, as can be expected, finds Iran’s demands absurd, if not insulting. Indeed, as of this writing, the White House, State Department, and Treasury are actively debating blacklisting what is left of the entire Iranian financial sector and thereby severing it from the international community.

Punishing Iran wasn’t all it was cracked up to be

Really?  We have been punishing Iran for over 40 years and what has that lead to?