It is Halloween and if normal there will be all sorts of creatures out and about…..and that included “devils”…

Speaking of the Devil….what you think you know is probably wrong……

The Devil is one of those figures that pretty much everyone has heard of, and pretty much anyone who’s heard of him has a good idea of what his deal is. They know what he looks like, what his real name is, what his secret origin story is, and all about how he wages war against God for the souls of humankind from his blazing kingdom of the damned in the depths of Hell.

And while for many people, the Devil is a folkloric figure or even just a metaphor, many others believe in a literal Devil who has real impact on the world. So even though it would be impossible to be “wrong” about a folkloric Devil, if you want to believe in a biblical Devil, you should know what the Bible does — and more often, doesn’t – say about him. Spoilers: all the things you know from the first paragraph are wrong.

In the popular conception of the Devil, he is the embodiment of pure evil, and as such, he’s God’s opposite number. The idea is that God and Satan are constantly at war with each other for the souls of humanity, each sending out their angels against the others’ in order to destroy their greatest enemy. This view, however, isn’t supported by the Bible at all. As the Encyclopedia Britannica points out, it’s only in post-biblical Jewish literature that Satan becomes an adversary of God. The idea of Satan as the ruler of fallen angels who rebelled against God simply does not exist in the Hebrew scriptures.

The idea of more or less equal forces of good and evil battling against each other likely entered into Jewish (and subsequently Christian) thinking as a result of the Jews being exposed to the more dualistic religion of Zoroastrianism when they were exiled to Babylon in the 6th century B.C.

While in the New Testament Satan is portrayed more clearly as an enemy of God, he’s still not anywhere close to equal in power. The best he can do is try to tempt Jesus into abandoning his mission of salvation and worship him, all of which Jesus resists without much effort. It’s only weaker-willed humans like Judas who succumb to Satan’s power. Satan and his minions don’t stand a chance against Jesus.

Happy Halloween and just pleased to able to make that wish in person….

After 5 attempts with storms Mother Nature finally kicked our butts. 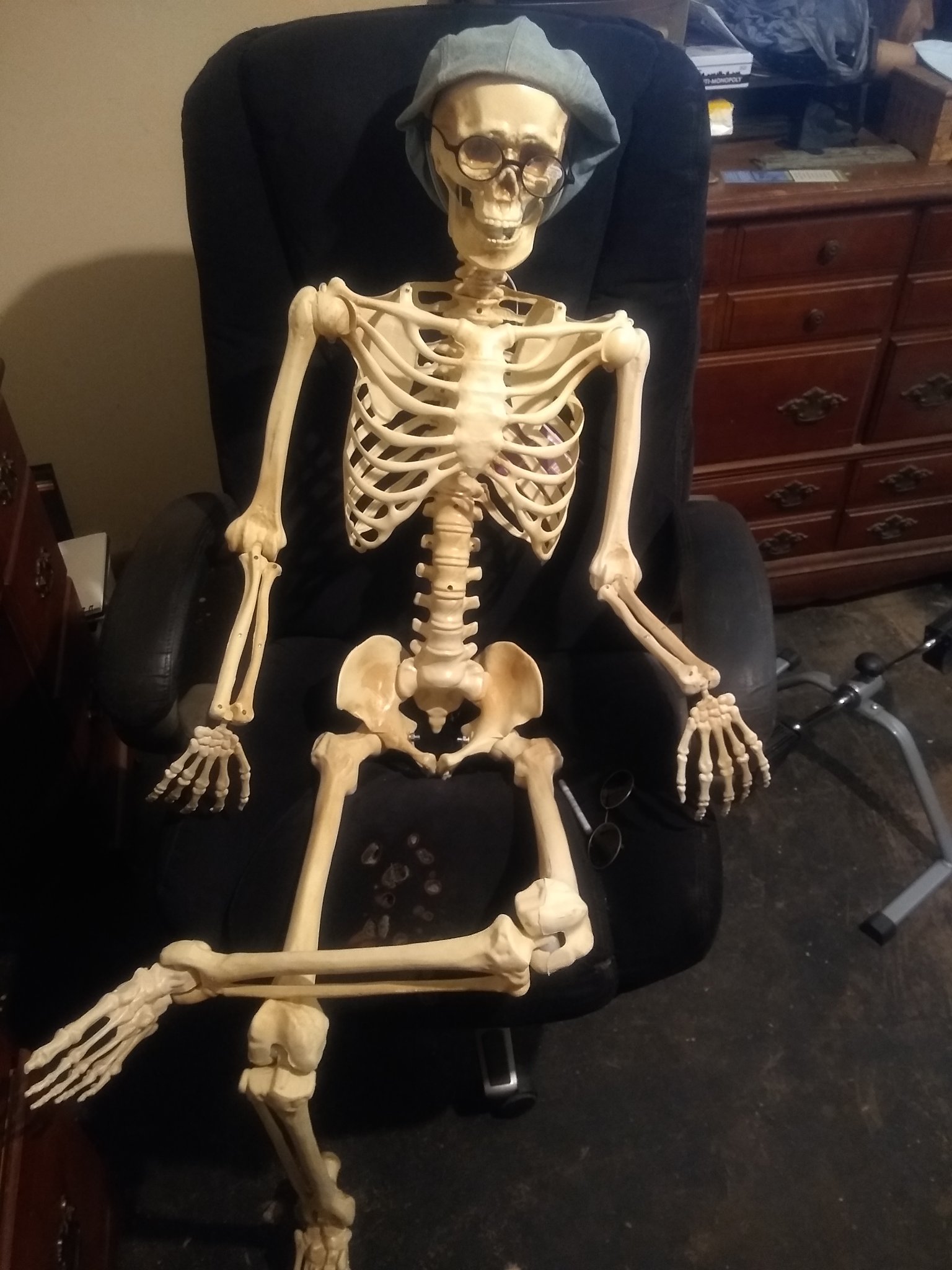 After days of the incessant humming of generators and the irritating shrill of chain saws only broken up by the screeching of sirens from emergency vehicles….and the endless stream of on-lookers trying to see who was worse off than they were…just a few of my favorite things in the post-hurricane days.

After three days in the dark the lights finally came on at 0130 hrs this morning.

In case you have been out of it touch Hurricane Zeta hit the Gulf Coast and went right over my house.

WE had to wait for daybreak to assess the damage and that is the worst prt of the storm…the wait.

My house made it through the storm pretty much okay…but my property too a hard it in the butt. I lost a portion of my fence, a bird feeder, a bunch of tree limbs, part of the arbor and most of the orange crop for this year. The good news is that the tangerine crop made it pretty much intact.

These a few pics I took on my phone…. 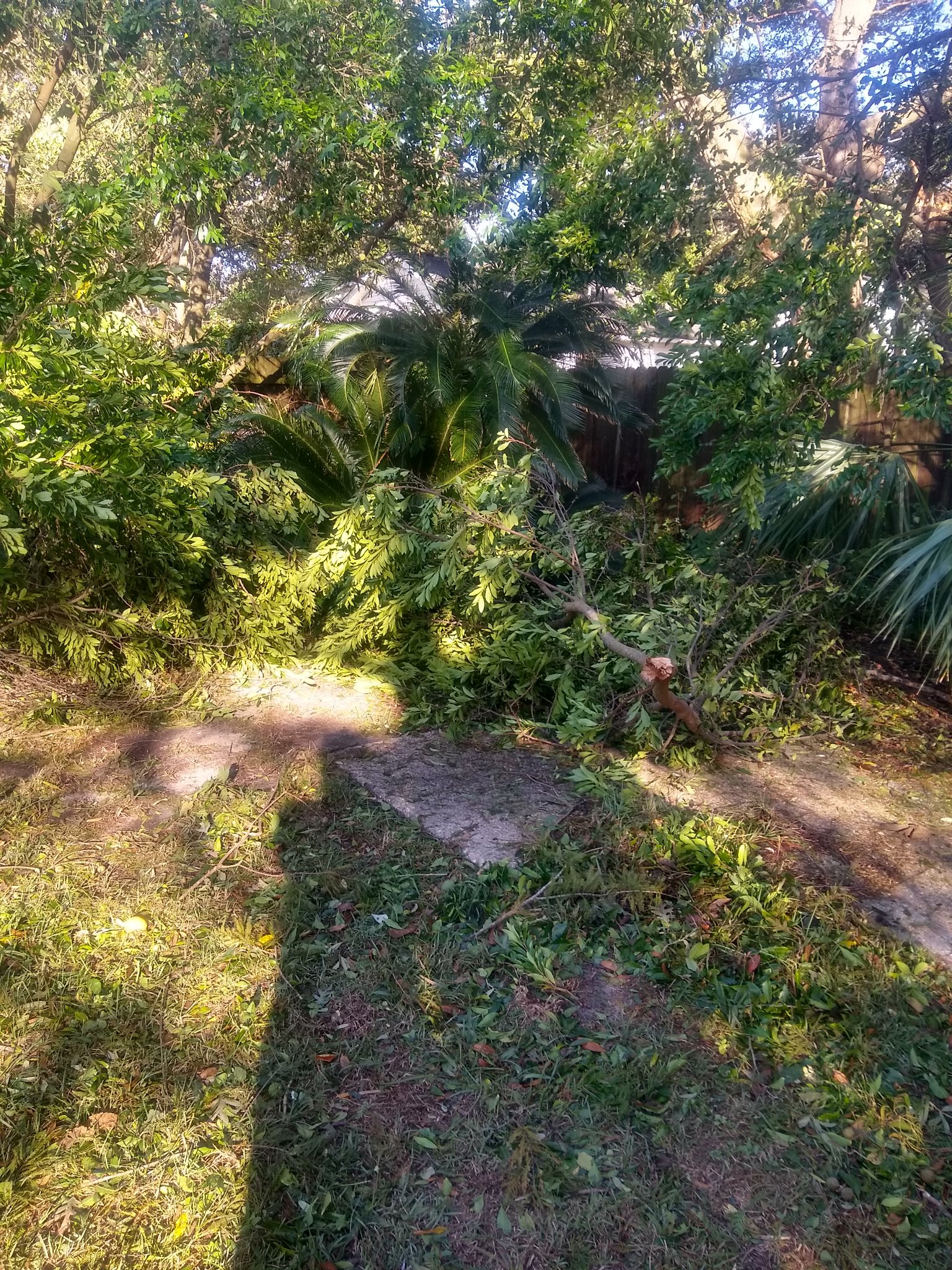 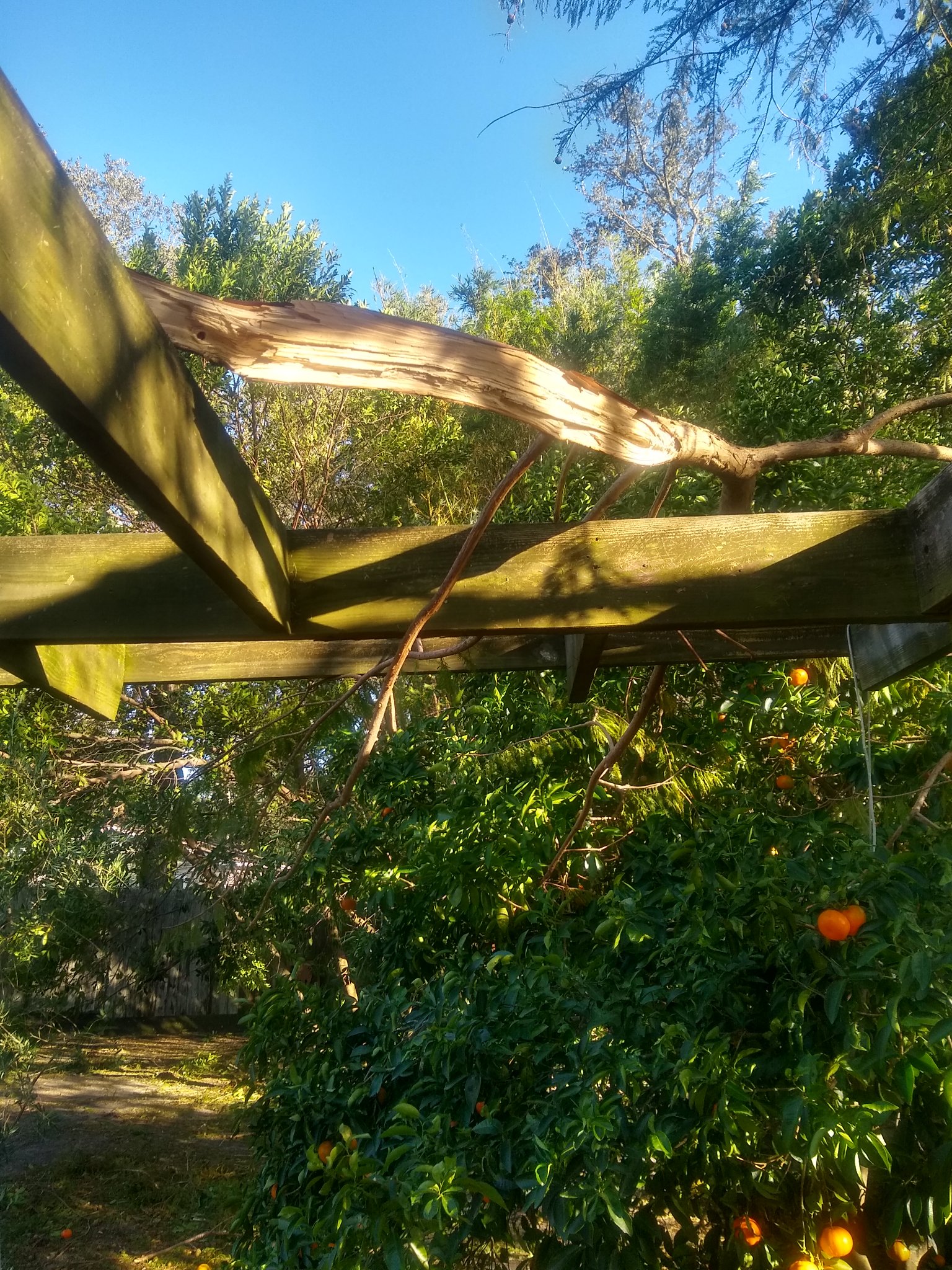 I walked around a but after daylight….the damage was pretty much the same as mine….mostly tree limbs…some tree were down…this is the guy across my street…. 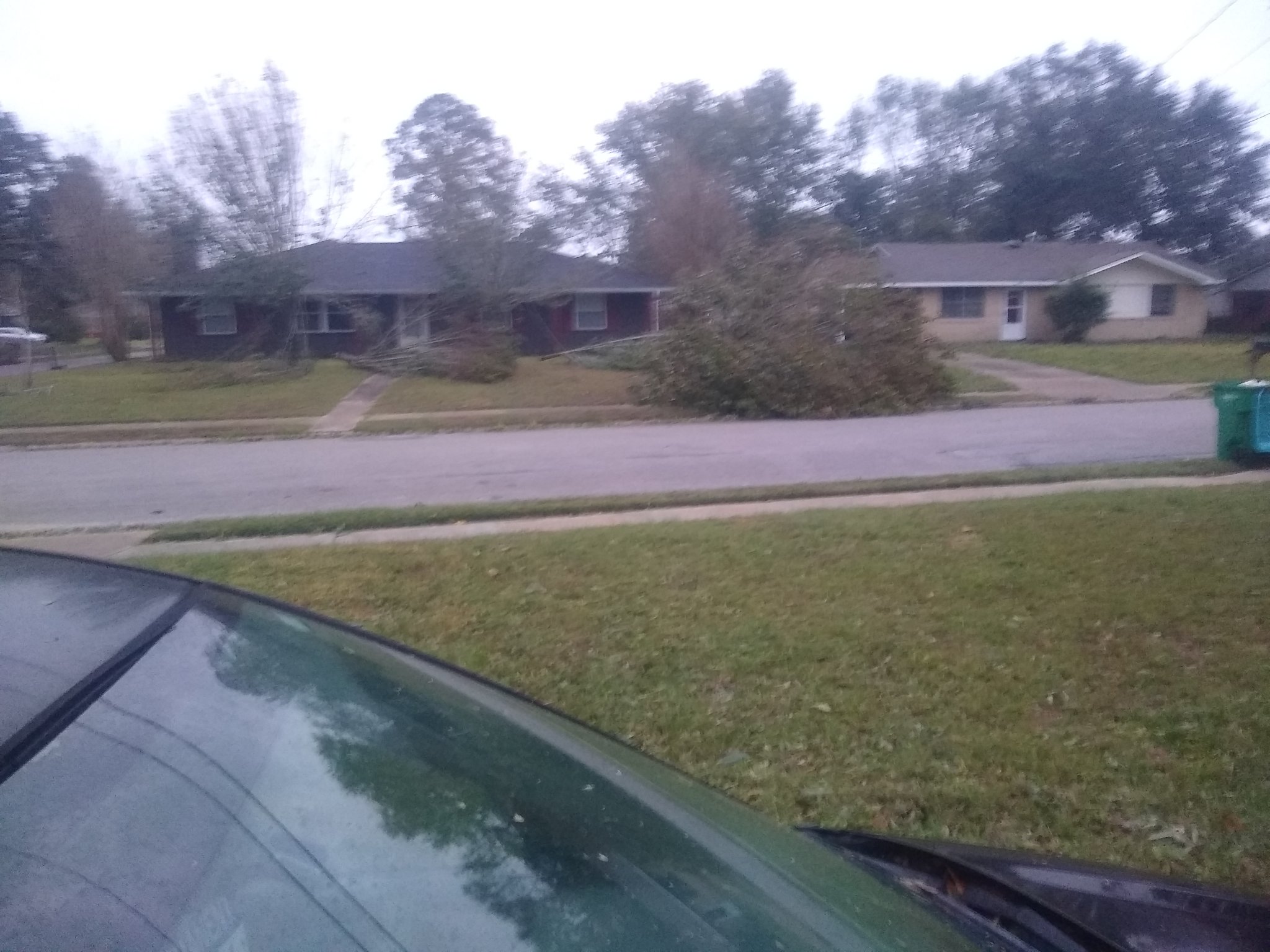 He also lost his garbage can and mailbox….they are somewhere around Birmingham about now.

Further down my street a guy lost his car port and the car that was parked under the shelter….more tree limbs.

All the damage assessed now were must endure the boredom until the power returns and while we wait we all pray that the food will be safe with as little spoilage as possible.  (It took 3 days for power to return)

The only good thing to come from this storm is the temperature…..after most storms it is 90+ degrees with 90% humidity but this one brought in cool temps and low humidity so sleeping was easy….50s is a real joy.

There was no joy for I missed my daily comments from my regulars….but I am back and hopefully the power will hold.

Thanx for the kind words and concern

It is that time of the year for ghost, goblins, witches and yes vampires…..but mostly it is the time for lots and lots of candy.

This year there will be something special…and I am not talking about the virus or related stuff.

No matter how you plan to spend Halloween night amid a pandemic, Mother Nature plans to deliver the appropriate setting. For the first time since 1944, a full moon will rise over all US time zones on Saturday, reports USA Today. Halloween only sees a full moon every 19 years, reports Smithsonian, meaning US time zones won’t experience another until 2039. This will be a blue moon, the second full moon of the month, which only occurs about once even 2.5 years, per Smithsonian. Dubbed the hunter’s moon—in reference to traditional efforts to hunt game at night to prepare for winter, per CNN—the moon will appear smaller than usual as it nears the farthest point in its orbit around the Earth, so mind the shadows.

One of the most popular characters for Halloween is that of a vampire…..so let’s look at the vampire thing….

Back in the early days of the American spot we had our witch trials and the deaths of people accused of witchcraft…..but did you know that the US had its “panic”?

It was a scene only Dracula and his blood-spattered ilk could love. In the late 18th and early 19th century, New Englanders were gripped by a vampire panic. In desperation, they began dismembering suspected vampires in hopes of driving off the terror and death that threatened to upend their lives.

It all began in some unfortunate New England villages, as tuberculosis (then called consumption) ravaged entire families and communities. This bacterial lung disease, which spreads easily among family members, has horrid symptoms, giving feverish sufferers an ashen appearance and sunken eyes. In some cases, blood would drop from their mouths.

It was a slow, wretched death – almost as if the life was gradually being drained out of them. It earned the name “consumption” for the way it caused dramatic weight loss. So severe was the epidemic that it claimed around 2 percent of the region’s population from 1786 to 1800 and eventually killed perhaps 25 percent of the East Coast’s citizens.

Nothing to worry about right?

Long before the CW’s The Vampire Diaries and Twilight rode the heartthrob vampire trend to ruin, before Tom Cruise and Brad Pitt were baring their fangs in laced-frilled adaptations of Anne Rice novels, and before Taika Waititi was doing a hilarious send-up of the entire mythos with What We Do In Shadows, vampires were part-and-parcel of a far more ancient set of terrifying myths and legends. Their deep-sinking, sexually symbolic fangs have captured imaginations and tickled suppressed libidos since Bram Stoker’s original 1897 novel took those myths and popularized them. His work, written as a series of letters and journal entries, opened the gateway to an entire universe of blood-slathered movies, books, TV shows, games, and questionable cosplay.

Is there a good reason for the vampire legend?

But where did the myth of vampires come from? Like many myths, it is based partly in fact. A blood disorder called porphyria, which has has been with us for millennia, became prevalent among the nobility and royalty of Eastern Europe. Porphyria is an inherited blood disorder that causes the body to produce less heme — a critical component of hemoglobin, the protein in red blood cells that carries oxygen from the lungs to the body tissues. It seems likely that this disorder is the origin of the vampire myth. In fact, porphyria is sometimes referred to as the “vampyre disease.”

Consider the symptoms of patients with porphyria:

Now that the vampire legend has been presented….how about another character of legend….the Werewolf?

We hear a howl. “Werewolf?” asks Dr. Victor Frankenstein. “There wolf,” replies Igor, adding, “There castle.” Young Frankenstein just never gets old. And neither does the legend of the werewolf.

A lot of what we think we know about werewolves is actually the product of Hollywood’s fertile imagination, including the “rules” of were-dom. In 1941 Universal rolled out The Wolf Man, starring Lon Chaney Jr. as Larry Talbot, the poor schmoe who, once bitten, is forever to be subject to dramatic, hirsute transformation into a ravenous killing machine. (Well, it is 1941, after all, so it’s not all that horrendous. The makeup effects are kind of cool, though.) Eventually the character would even meet Abbot and Costello (along with Frankenstein’s Monster).

There is my round-up for this day……