This post ought to bring in the mental midgets from all corners of the internet……I certainly  hope so………the trolls will have a day with this post but first they will have to put down the Cheetohs and do what their Mommie tells them……….that is if I did not use too big of words for them…….(insert smiley face)………..if these words are a problem then ask a 10 year old……they will understand.

I have been watching the news in Texas…..they have this debate going on about the possibility to openly carry a hand gun in public……it is a debate the we should have but it has gone beyond reasonable to the brutish……it appears that thugs from some guns rights group is pushing its way into legislators offices and basically intimidating them into voting for the bill…..they even conned the Lt. Governor into a meeting so he could avoid a scene…..but what can you expect from a spineless politician?  (This is a quick definition of what is happening if you want more info then Google will do you proud)

My take on this situation…….

If it is illegal to intimidate a witness or juror in a trial, how isd it legal that such intimidation is legal when it comes to law makers?  Okay you do not like that take………Is it legal to intimidate a retailer to get him to do what you want?  Then how is it legal use harsh words and maybe a gun to convince someone to see things your way?  I believe that is called coercion.  And the last time I checked it was against the law as well as the Constitution.

Does the term “Brown Shirts” ring a bell?  In case you missed the PBS special…the Brown Shirts were thugs in 20’s and 30’s Germany that intimidated the population to get what they wanted….does it ring a bell now?

Okay another angle…..let’s say you go to a rally or protests whatever you would like to call it and most everyone there were people of color and almost all of them had weapons in plain sight…..what will be your reaction?….I mean besides running to FOX News that is…….

Like an election we have here in the good old US of A there will always be fringe candidates……we will always have the two dominate parties but there is always those hanging around the fringe trying desperately to get their message out for all to hear…..

In my day our “gimmick” candidates were Pat Paulson or Alfred E. Newman or even Mickey Mouse…..but we have come a long way since those Dark Ages…………..

2016 will be No different……there will be a Green Party candidate, a Socialist candidate, the Constitution Party, and even a Whig…..but there are others that are too far out there to garner much attention by the MSM…….I thought I would be a good guy and give some of them their props……

There are as of this moment 366 people seeking the office of President of the United States of America next year, and as much as we apparently love the idea of He Who Shall Not Be Named 2016, some of the actual humans who’ve declared their candidacy sound just as fictional. The New York Times runs through some of the more colorful characters, many of whom seem quite taken with capital letters, who would like to get their hands on the nuclear codes:

HRM Caesar Saint Augustine de Buonaparte Emperor of the United States of Turtle Island, Absolute Dictator Party: We’ll just call him Caesar. The Times notes that this is his sixth run for the Oval; he rails against “FREAKS RUNNING THE PLANET” in his filing. Here’s his YouTube channel, but his FEC filing is, er, thorough.

The bar for filing FEC paperwork is pretty low, a rep tells the Times: “The only requirement to file that form is if they raise or spend more than $5,000. Anyone can file that FEC form.” For more, including Vermin Supreme, check out the Times’ full piece

Found your candidate yet?

Stay tuned….it will get crazier, no doubt!

As the 2016 election approaches we have hour to hour polls…..the media needs them so they can talk like they have some sort of crystal ball……these polls are useless!

But let’s say that polls could be used to predict the next president……I think if they were we would have a surprise come next November…..

If voting took place today, and if he could make the journey from the Death Star, Darth Vader might just be named the next president of the United States. He’d have a better chance than any of the real-life candidates at least, according to an amusing new poll from the Washington Post. The Terminator and the shark from Jaws also sit higher in net favorability rankings—based on positive ratings minus the negative ones from recent traditional polls (for the real candidates) as well as 1,000 Google users who answered questions over the weekend (for the fictional ones)—than any of the actual candidates. Bernie Sanders is the only one of the candidates to have a favorable score, though 62% of poll respondents didn’t give an opinion on the senator because they didn’t know much about him.

Sanders is followed by Marco Rubio, Barack Obama, Hillary Clinton, Martin O’Malley, Rand Paul, and Scott Walker. Walker fared only slightly better than Voldemort, the noseless villain from Harry Potter, who in turn outranks Mike Huckabee, Ted Cruz, Jeb Bush, Rick Santorum, Chris Christie, and Donald Trump, in that order. Trump, who 71% viewed unfavorably, scored a negative 56, far worse than Christie’s negative 26. A CNN poll last week found potential voters have the most unfavorable impression of Clinton since 2001, with many doubting whether she is honest and trustworthy. The same poll found Rubio and Bush lead a tight pack, including Huckabee, Walker, Cruz, Paul, and Ben Carson, on the Republican side.

Bernie is the only candidate that has a positive poll number (go figure)…..maybe that should be the story for the media……but unfortunately it will not.

Polls are as worthless as tits on a boar….their only purpose is to give the lazy pundits something to talk about without having to do the leg work…….it is easier than thinking.

Every American has his/her opinion on what is happening in the Middle East, especially with the Israeli/Palestine conflict……

The media does NOT do balanced reporting on the situation……a case could be made that they are not a partial player in the news of the region…….

There is so much that the American people do not know about it…..in most case it is by choice because of some outdated BS about some mythical book that has NO historical accuracy within its pages……

If Americans would open their eyes and see the truth their reactions would be totally different than what they form by watching MSM and its lies…..

Here is a report of the status of the conflict……most Americans will NOT read this because…..well….they just DO NOT care!  Shame that a nation that cares so deeply for the plight of others like Sudan or Ethiopians or a group of people trapped on a mountain can care so little for others……

You know there are many sites and many opinions that are just damn right hateful on the web……..I mean you can find someone that hates puppies or kittens.

While I was torturing myself by reading a few of these blogs I came across one about head coverings……the hijab to be exact……in case you are not aware of this item…….is a covering that covers the head and chest, which is often worn by Muslim women beyond the age of puberty in the presence of adult males outside of their immediate family as a form of modest attire.

This jerk wad on his blog was telling the world that it was a sign of jihad and a symbol of hate……I had to point out that the word “hijab” in Arabic literally means a cover.  Then I went about asking this twat what he thought of the habit of Catholic nuns or for that matter the head scarf worn by orthodox Jewish women……..and then ask what is the difference in them from the hijab?  Do nuns want to kill their adversaries?  Or maybe those orthodox Jewish women are secret terrorists. 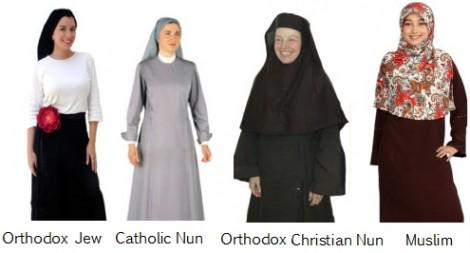 It is a traditional head covering worn by women……there is no other meaning than that and to make more of it than there is shows a serious lack of intelligence.