First….I take MoMo for her walk at 5 am because it is a bit cooler…that is until this morning…..at 5 am it was 90 degrees with 85% humidity….just a flippin’ joy. (sarcasm)

Now onto the Big News for the Coast……

This weekend the massive dust cloud that originated from the Sahara should make it to our neck of the world….the problem is we may not get much spectacular sights for it is forecast to be overcast for most of the week.

So I will post photos if I get a chance….until then how about some facts about this “cloud”……

Expansive dust clouds arise from the sun-baked Sahara each year, making the 5,000-mile journey across the Atlantic Ocean to the southern United States. While these dust plumes tend to stay intact while traveling across the ocean, they typically diffuse by the time they hit the Caribbean. But this year, things are different.

This month’s dust cloud is more resilient than usual—its dust is so opaque and thick that it can be clearly seen from the International Space Station, while its predecessors have been ghostly and faint from space. Astronaut Doug Hurley photographed the cloud from the ISS on June 21, tweeting, “We flew over this Saharan dust plume today in the west central Atlantic. Amazing how large an area it covers!”

These dust plumes, called the Saharan Air Layer (or SAL) are born when severe wind storms strike the Sahara. Entering the Atlantic Ocean at the Intertropical Convergence Zone, the plumes catch on to the trade winds, which run east-west along the equator.

The dust is already covering Caribbean skies, and Gulf Coast states like Texas and Louisiana should expect to confront this vast cloud on Wednesday and Thursday. Before the cloud enters the US here’s what you should know about the plumes.

That is all I have for this Sunday….hopefully you learned a bit and were entertained…..come Monday it is back to the news in the spotlight…..

There are those Trump supporters that fight wearing the mask tooth (which few have any) and nail…..some say God will protect them….if that is true then why do they need all those goddamn guns?

None of those people are that good looking and the masks are a public service by hiding their faces.

Plus they piss and moan about masks but few have done the same about the massive food price increases…why?  Oh yeah most of these are on the EBT card and do not really care since the government pays their food bill for them.

Okay that rant is done….now on to the Miami thing.

The numbers of Covid-19 cases has skyrocketed in Florida as well as other states….and Miami’s city council has grab the problem by the horns and done something…..

The city of Miami will begin fining repeat offenders up to $500 for not wearing a mask in public, citing the surge in COVID-19 cases across the state of Florida.

A first offense could net a fine of $50; a second, $150. Those who persist in refusing to wear a face-covering could be arrested, as a last resort.

“The only way to ensure compliance in some way shape or form is you have to have a heavy hand,” City Manager Art Noriega said Thursday.

Still, those who refuse to pay their fines will not have to face the wrath of any collection agency, the paper noted, and the emphasis will purportedly be on education, not enforcement

A good idea but why make it a toothless proposal?

For the idiots will just keep doing what they are doing….making things worse for the rest of the population.

I say SCREW THE IDIOTS…make it a full blown fine payable in 10 days or it doubles.

I think that is a better education than what is being offered…..at least Miami is trying to do the healthy thing……https://people.com/health/miami-to-close-beaches-issue-500-fines-to-those-not-wearing-masks-amid-coronavirus-surge/

Now the rest of the damn state needs to follow suit and stop listening to the idiot in the governor’s seat and the moron in DC. 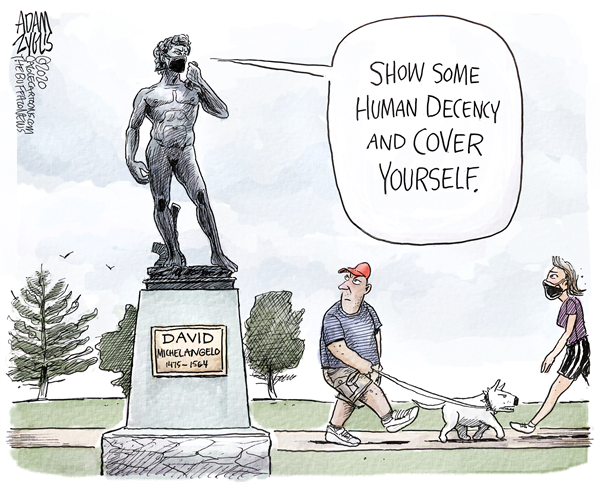 All the protests and accusations of police brutality it appears that some networks are dropping their police reality programming…..’Live PD and the all-time longest cop show…… “Cops”……

A&E Network has canceled the police reality series Live PD following weeks of protests over the death of George Floyd and a report that a crew from the show filmed the death of another black man in police custody. The cable network announced the move Wednesday, a day after the similar show Cops, on the air for 33 seasons, was dropped by the Paramount Network, the AP reports. “This is a critical time in our nation’s history and we have made the decision to cease production on Live PD,” A&E said in a statement. “Going forward, we will determine if there is a clear pathway to tell the stories of both the community and the police officers whose role it is to serve them.”

The cancellation also comes a day after a reports from the Austin American-Statesman and KVUE-TV that 40-year-old Javier Ambler, who was black, died in Texas last year after sheriff’s deputies repeatedly used stun guns on him, despite his cries for help and pleas that he was sick and couldn’t breathe. Prosecutors investigating Ambler’s death said the presence of the Live PD crew made the arrest, which was captured on police body-camera video obtained by the news outlets, particularly troubling. A&E said in a previous statement that its video never aired because of a policy against showing a death, and it did not keep the footage after it was informed the initial investigation had closed.

The IQ of the viewing public just went up by 50 points.

Now can we get to work on the rest of the drivel that goes by the name of Reality TV?

When we take those out we can then concentrate on Game Shows.

Making society smarter one television cock up after another.

Monuments dedicated to the ‘heroes’ of the Confederacy have been coming down at a steady pace…..even some vandalism as well…..even my state is coming into the 21st century….there will be a vote on removing the state flag that displays the Rebel battle standard……….Donald the Orange has been fuming over these assaults on ‘heritage’…..and watch he sees as disrespect…….and as he always does he has opened the bottomless pit he calls a mouth…..

President Trump called people who tear down or deface monuments “terrorists” on Thursday and promised there would be “retribution.” The president addressed the subject during a socially distanced town hall event in Wisconsin with Fox’s Sean Hannity, the Hill reports. “Every night we’re going to get tougher and tougher, and at some point there is going to be retribution because there has to be,” Trump said. “These people are vandals, but they’re agitators, but they’re really, they’re terrorists in a sense.” The president, who plans to sign a “very strong executive order” protecting monuments, said there would not have been unrest, including the toppling of a statue, in Madison this week if the state had elected a Republican governor in 2018.

Trump said people who want to have monuments like statues of Confederate leaders removed should go through the proper channels. “You know, we can take things down, too,” he said, per the AP. “I can understand certain things being taken down. But they ought to go through a process, legally. And then we take it down, in some cases put ’em in museums or wherever they may go.” The president spoke to Hannity in front of around 50 supporters and took questions from the audience for 30 minutes, the first of which was the softball: “What do you think is your greatest accomplishment, in your eyes?” CNN reports that Trump didn’t provide an answer when Hannity asked him what his top priority items for a second term are.

In a true racist way Donald has shown his true colors by signing an EO on the monuments thing…..

The order, which basically authorizes the attorney general to enforce the already existing Veterans’ Memorial Preservation Act, gives the AG the ability to “prioritize” within the DOJ cases involving the damaging of monuments, with a penalty “of up to 10 years’ imprisonment.” The order also notes that states and law enforcement agencies that don’t adequately protect statues and monuments risk losing federal grants.

“Jurisdictions’ recent abandonment of their law enforcement responsibilities with respect to public monuments, memorials, and statues casts doubt on their willingness to protect other public spaces and maintain the peace within them,” the order states, per the Wall Street Journal. After the signing, White House press secretary Kayleigh McEnany said the order signified that “President Trump will never allow violence to control our streets, rewrite our history, or harm the American way of life,” per CNN. Washington Gov. Jay Inslee, a Democrat, talked to Wolf Blitzer on CNN Friday night and lamented the president’s focus, saying he thought Trump should be concentrating on recent spikes in coronavirus cases around the country. “I wish he cared more about living Americans instead of dead Confederates,” Inslee said, per Politico.

This is a waste of time and energy….those so-called monuments have seen their day and will be coming down….I do not agree with the destruction of them for that will do nothing to to erase their history.

Like it or not, Confederate symbols have been appropriated by white supremacists and now represent the most shameful part of our past — a past of slavery, lynching, Jim Crow and segregation. Those who argue differently need only to look at the words of Alexander Stephens, vice president of the Confederacy, in which he stated that compared with the United States, “Our new Government is founded upon exactly the opposite ideas; its foundations are laid, its cornerstone rests, upon the great truth that the negro is not equal to the white man; that slavery, subordination to the superior race, is his natural and normal condition.”

Give these statues a spot with disclaimers all around of who and what they are….I mean there is a museum for the Holocaust….history needs preserving even the shitty history of slavery and the Civil War.