I was not going to watch the sideshow of the day…GOP debate……but it seems that I may have missed something……the buzz is Carly went ballistic on Trump…..and I had to see it for myself……

DAMN, girl!  She is a fighter!

The Carly Fiorina-Donald Trump showdown was billed as the moment to watch during last night’s long and crowded GOP debate, and she’s emerging as the biggest winner of both the exchange and the night—and is being talked about almost as much as Trump. Here’s what the pundits are saying:

Carly may be the answer to the Trump invasion into GOP politics…..she apparently is not afraid of his abusive manor……she will not be bullied…..I like that…..maybe the men in this thing should take a lead from Carly and man up and take it to Trump….there is a wealth of stuff they could hit him on….but fear has them sidelined.

CRAP!  That is 3 hours of my life I will never get back!

A final closing thought……the presumptive front runner a couple months ago was Jeb Bush……he wimped out so bad…to the point of apologizing to his mother for smoking dope…..

His performance was lackluster at best……if he eventually makes the nomination……the GOP will be in trouble….a man eater like Clinton will devour his pussy ass!

Maybe GW was the better of the two brothers…..Jeb needs to grow a pair if he is to win this thing……

I am NOT a Carly fan….but she has shown that she is tough and willing to take on the elephant in the room…..I respect that!

Last night was the 2nd GOP debate and that is as far as I am going to go with my post on that debate.  I feel others will pick it apart and do it all the justice I would have done……

I want to take another tact here….ideological thoughts……

I admit it I am a viewer of the History Channel especially when they actually target historical events and stuff…..I refuse to view any of the entertainment that stinks of reality TV……in the course of watching a series on dictators I came across something that gave me pause….a pause to think….and consider some similarities in today’s political discourse.  And you guys know me….I do love to throw a little historical perspective into my writings…….well you will not be disappointed.

One of the series covered Hitler…….. of course it did….I mean what is the History Channel without Hitler?  An expert on this program was talking about Hitler’s Mein Kampf….this person was analyzing the content and he stated that it was a mish-mash of rambling thoughts and mostly jibberish….(hold that thought)

On another part of the series the life and times of Libya’s Qaddafi was covered…..the show covered all aspects of his life and rise to power and even an expert talked about his ideology in his book, The Green Book.  The expert went on to tell of the ideas and the randomness of his thoughts and this expert like another one called the thoughts as “immature and jibberish”…..(sound familiar?)  (Hold that thought also)

I have watched and listen to Trump for months now…all the while waiting for some sort of perspective on his solutions to the problems that he points out…..instead I get rambling, narcissistic rhetoric….most of the time it sounds like a 3rd grader defending himself to a pissed off teacher for his misbehavior….the best way I can describe his speeches is…….rambling thoughts, immature and jibberish.  (And there we have the closing of the circle)

Are those characteristics of a dictatorial, maniacal  mad man…..incoherent jibber jabber?

Don’t have a stroke…….Just asking.

Would you like to know more about the Cold War years?

If so, the CIA has just released a bunch of PICLs from the Kennedy and Johnson years…..it is the intel briefings the prez gets from his intel people…..there is some great stuff in there……

Why not learn something….it is better than sitting on your ass and watching Man vs Wild…..

I admit it….I am no libertarian….however I will agree with them on one issue….foreign policy…..I do not think that every international situation needs to be approached from a military solution point of view.

When Rand Paul went to Congress and started his lip service to Obama about the failure of US foreign policy…I applauded him.  His speeches were good and fill with ideas that I could grasp ….maybe not all but most….

I have been a student of war since my return from my first tour in Vietnam……I studied at university Conflict management and resolution….so I have been interested in anything that relates to the subject.

Source: No Peace Through Politics by Dan Sanchez — Antiwar.com

In the beginning there was hope….I had hoped that Rand Paul would be a voice for reason in our dealing with international situations…..and I have been sadly disappointed in his actions…..

That is what I get for showing a little faith in a politician…..now I know why my grandfather would not stay in the same room with a preacher or a politician…..

A year ago the world woke up to find a new “cobra” in the woodpile.  ISIS and if you buy into the apocalyptic BS then the end of days approaches….if you are claiming to be Christian is that not kinda what you are looking for?  Just asking.

For this year we the US and its allies have been fighting (if you can call it that) ISIS and its expansion into the Middle East, Syria and Iraq most notably…..but they are making headway elsewhere…..especially in areas where AQ has not been successful but impotent in their fight to dominate.

Our relentless campaign of airstrikes is possibly doing more damage than good…….our moderate allies are pretty damn impotent…..and now with Turkey attacking the Kurds they are giving ISIS something they have not had up to this point….an air force……

The scenario is getting more muddy with each passing day…..

Source: Nothing Succeeds Like Failure by Tom Engelhardt — Antiwar.com

The big news story of the day yesterday was the one about the kid that got busted for making homemade digital clock…..and since his name sounded Muslim it must be a bomb, right?

Ahmed Mohamed says it took him only 20 minutes to build the homemade clock: he wired a circuit board and power supply to a digital display and stuffed the device into a pencil case before bed on Sunday. The next day, the 14-year-old freshman at MacArthur High School in Irving, Texas—a member of his middle school robotics club who makes radios and repairs his own go-kart—showed his creation to his engineering teacher, hoping to impress him, per the Dallas Morning News. “He was like, ‘That’s really nice,'” but said not to show the clock to other teachers, Ahmed says. When it beeped during another lesson, however, Ahmed revealed his invention to a teacher, who told him it looked like a bomb. Soon, Ahmed tells NBC Dallas police officers arrived, questioned him, then cuffed him and led him to police headquarters for fingerprints, mugshots, and an interrogation.

Officers, who took the clock and Ahmed’s tablet, tell USA Today Ahmed was being “passive aggressive” during questioning, and though he maintained the device was a clock, couldn’t provide a “reasonable answer” for why he had it. “I brought something to school that wasn’t a threat to anyone. I didn’t do anything wrong,” Ahmed says, adding he was denied a phone call to his father and his surname was repeatedly mentioned by officers. “I think this wouldn’t even be a question if his name wasn’t Ahmed Mohamed,” says a rep for the Council on American-Islamic Relations, which is investigating, per the BBC. “He just wants to invent good things for mankind,” Ahmed’s father adds. “But because his name is Mohamed and because of Sept. 11, I think my son got mistreated.” Ahmed was released to his parents and suspended from school for three days. Police say they may still press charges of making a hoax bomb.

You heard it right sports fans…..he could be charged for making a hoax bomb! 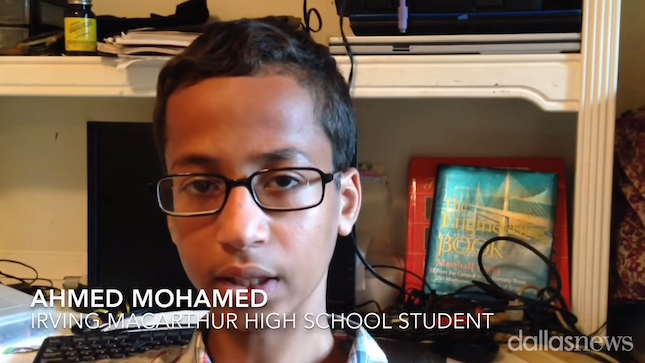 This is just the icing on the cake these days……but there are a few good things that came out of this situation for young Ahmed and his home-made time piece….

Ahmed Mohamed was getting interrogated at a police station because he brought a homemade clock to school and it was mistaken for a bomb. But soon, the Texas 14-year-old might be hanging out in some much, much better locations. Three of the high-profile responses after his story went viral:

Here is the problem…..NO one at the school knew what a bomb actually looks like and that includes the police…..and apparently they are not sure what the internal workings of a digital clock looks like either……

Would this young man had been put through this crap if his name was Billy Bubba Smith?  Or if had blonde hair and blue eyes?

Source: 7 Kids Not Named Mohamed Who Brought Homemade Clocks to School And Didn’t Get Arrested

Oh boy!  Let’s talk about the hottest button issue this week.  NO not the rise of Trump but rather that of the refugees…..you know that situation that has the hate mongers and fear mongers working overtime…..to spread as much misinformation as possible before the world moves on…..

But first how about a little historical perspective?  (you knew that was coming, right?)

Remember when America erupted in fury over France’s refusal to support the US invasion of Iraq in 2003?  President Jacques Chirac and Prime Minister Dominque de Villepin warned that George Bush’s unprovoked aggression against Iraq would destabilize the Mideast and inflict untold dangers on Europe. America’s response to the sage warning was to change the […]

Source: How to End the Refugee Flood – The Unz Review

That is right…..the problems facing the world today can all be traced back to the West’s misadventures in the region.

I know few want to hear that, you know American Exceptionalism and all that fecal matter….but when the facts are known the results are overwhelming…

Probably has something to do with that old adversary….KARMA!