I fully intended on ignoring the politics of the election until the election was actually in the same year….but yesterday having a conversation I was confronted with all sorts of stuff I just could not let go……I had to pop off.

The gentleman was upset that Trump had caved and signed the GOP loyal pledge….what pledge you ask?

Donald Trump has come to heel, agreeing to support the eventual Republican presidential nominee and not run as a third-party candidate, the AP reports. Despite being the only candidate to publicly mull a third-party run during the August GOP primary debate, Trump signed a party loyalty pledge today. The pledge was circulated by the Republican National Committee to all candidates.

Prior to Trump agreeing to the loyalty pledge, sources tell CNN, most supporters calling into his campaign about the pledge wanted Trump not to sign. While the pledge is not a legally binding document, Trump says he sees “no circumstance under which I would tear up that pledge,” FOX News and NBC report. According to the AP, a third-party run would have made the path to the presidency much easier for the eventual Democratic candidate.

My ‘friend’ was upset that trump has just stopped himself from running as a 3rd party candidate…..I did not agree…..for one, it is not legally binding and Trump can opt out any time he feels like it…..and two……I see it differently….I see it that the RNC has basically said that if Trump is the nominee then all other candidates will pretty inclined to support him.  I see it as the RNC caving to Trump not the other way around.

The gentleman went on to say that he supported Trump because he is an outsider, that he is non-traditional unscripted candidate….I had to disagree with him to his dismay……I pointed out that Trump’s speeches have not changed since early July….”Bush is low energy”…..that people love him, (insert nationality), that he has lots of money and so on……

Since it has not changed then he is basically doing what all politicians do…..give a “stump speech”.  I do not see anything he has said or done since July as unscripted or non-traditional.

He then told me that all that may be true but at least Trump has a plan when it comes to international situation…..I once again disagreed with him…..I said that telling the world he would build a wall is not a solution that has very much validity…….then I told him about a question that Trump was asked about ISIS and the Middle East…….

Donald Trump may have spent last night on Wikipedia after what the Washington Post describes as “some uncomfortable moments” during an interview with conservative radio host Hugh Hewitt yesterday. Touching upon foreign policy with the presidential candidate who’s said he would be “so tough” on ISIS, Hewitt asked questions not only about ISIS, but about other terror organizations and military groups—and Trump, for the first time maybe ever, seemed unsure of himself. “Are you familiar with General Soleimani?” Hewitt asked Trump, referring to the commander of the Iranian Quds Forces, an elite military group. Trump offered a hesitant “Yes, but go ahead, give me a little, go ahead, tell me.” When Hewitt continued with, “He runs the Quds Forces,” Trump replied, “Yes, OK, right,” before then jumping into how “the Kurds, by the way, have been horribly mistreated by us.”

Hewitt had to point out he meant the Quds, not the Middle Eastern ethnic group, then pressed Trump on the names of those who run Hezbollah, al-Qaeda, the Nusra Front, and ISIS. Trump seemed dismissive, telling Hewitt, “I knew you were going to ask me things like this” and adding it didn’t matter who was in charge of these groups since he’d get rid of them as president. He also said he considered these “gotcha” questions and that it would be “ridiculous” if Hewitt brings them up again when he moderates the next GOP debate later this month. Who did answer many of Hewitt’s questions with more accuracy: Carly Fiorina, whom the host interviewed in the same episode, the paper notes. Trump seemed to recover his confidence midway through the spot, however, telling Hewitt that if he becomes president, “I will be so good at the military, your head will spin,” the New York Times notes.  (A veiled threat?)

To me he has less answers to international problems than my dog……I reminded my ‘friend’ that this was to be the foreign policy election…….once again he was not amused……

Finally, I pointed out that if Trump keeps on this tack and becomes the nominee it will be the first time that a person would be elected without every touching on solutions to our problems.

And that if he does not know an answer it is your fault for asking such a silly question…..I still do not understand the fascination……but that is just me.

After our conversation this gentleman took his leave but not before telling me that I was a “buzz kill”……I gave him my apologies for pissing on his parade…..we then parted and I went on drinking coffee and having a huge “Cinnabon”…….it was almost as satisfying as my talk with the gentleman……

Sorry had to get a shout out to Parlement Funkadelic…..ah the good old days!

My readers know that I have a healthy curiosity about the Middle East and I do a lot of writing on the subject…….I have been a bit distracted by the games politicians are playing in the run up to the 2016 election……..but I need to do what I do…..

Meanwhile back in the Middle East and points East…….Al-Qaeda that bunch of heathens that caused the 9/11 attack……but first let’s step back to the 1980’s, Afghanistan…….the Russians have overrun the country and we Americans are funding the opposition, people like the Northern Alliance and…..you guessed it   Al-Qaeda.  That is right Irene we of the United States of America are partially responsible for the rise of AQ worldwide…..all in the name of fighting the Russians.  Was the price worth it?

In the last couple of months it seems that AQ and ISIS are not the best of friends even though their ideologies are similar……..

Source: The Battle of Extremists: ISIS Faces Off Against Al-Qaeda and Jaysh Al-Islam

About a month ago I wrote about the friction between AQ and ISIS……there have been incidents of them fighting each other for land and influence.  When that occurred I said then why not use this friction in the fight against ISIS….what is the old saying….”the enemy of my enemy is my friend”…..why not use it to the advantage we need to “degrade and destroy” ISIS.

Oh boy did I catch grief for that post.  There was lots of ranting and rambling about this group or that and the evil they both would bring to the table…..

The problem is that the coalition airstrikes are doing very little to curb the growing strength of ISIS……the Iraqi army is as ineffective as anything I have seen (that is our fault for the damn lame program of de-Bathification of the army)….the only success even if it is limited is that of the Kurds.  The problem there is that politics must be played in arming them with the Iraqi government that has a suspicious streak….all in all the whole strategy is a wash and will remain so as long as the plan remains the same.

It makes me smile to see after all the grief I took that someone sees the benefit of using AQ to fight and eventually destroy ISIS….

Now you want to ask…..who is that masked man, right?

There is validity in his thoughts and thinking outside the box is what is needed if we are to “degrade and destroy” ISIS.  Petraeus should be listened to at this time….we can worry about the results of this fight later…….it may not end well but if ISIS can be “degraded and destroyed” is that not the end game in all this?

Either get serious about ISIS or bow the Hell out!

For Christ sake…..the overpaid jock has had his day in court and he has a big grin….please move the f*ck on!

Since day one of the Obama presidency…there has been this batcrap crazy bunch that keep go on and on about Sharia Law in the US…..for you see Obama is a secret Muslim and you know what that means…..they have even taken it to the legislative branches of states and the federal government…….so re truly concerned about the possibility that Sharia Law could gain foothold in the US…..and these people are damn sure NOT going to let that happen!

First, these people are morons!

Second they have nothing to worry about…it is already here and in place and championed by many!

Say what?  Let’s look at Sharia Law shall we? 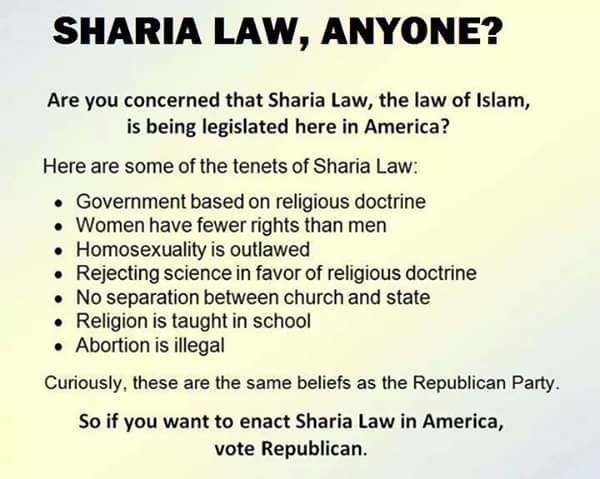 The only difference is one hugs the Qu’ran the other the Bible……..

It would be lovely if once these people knew what the Hell they were bitching about……it would save so many embarrassing moments.

I am always reading and searching for something that I think my readers will appreciate….they may not agree with the piece but at least they can appreciate the piece for its content.

2015 has been an amazing year……there has been the mash up with ISIS and the ascendancy of Donald Trump to the forefront of GOP politics.

ISIS has been on a propaganda blitz with their vulgar and barbaric videos of their so-called “executions” which all civilized people find horrendous and despicable.

Then there is Trump…..he has made news by his bad mouthing immigrants, his attacks on other GOP candidates and his verbiage about China……and he has not finished there is so much more to come.

I know there is a link between the two different subjects?

Am I trying to equate ISIS and Trump for some obscure reason?

What could I be thinking, right?

While I was on-line researching a series that I am writing on Central Asia I came upon an opinion piece that caught my eye…..the common thread that weaves through both subjects is……showmanship.

ISIL and Donald Trump are united in their vulgar showmanship of power.

Please….I am not trying to equate one with the other in some phantom way…..just showing that showmanship goes a long way in this world in which we live….

I found this op-ed interesting and I wanted to post it and see what others thought of it….