A hard day at the research bench…..yes, I have a bench where I do all my research and writing….the brain has gone into la la land…..so the perfect time for some music…..

I saw these guys in concert what seems like a lifetime ago….they were GREAT!  In the 3+ hour concert they had at least 4 custom changes…..well worth the $7 cover…..yea it was that long ago.

Good day……I would like to make a short statement…..for weeks now political leaders have gone before the cameras to voice their opinion about the use of US forces in the Middle East….and almost to a person they smile while talking…..THERE IS NOTHING ABOUT USING AMERICAN TROOPS TO FIGHT A WAR!

In comments over the weekend, Secretary of Defense Chuck Hagel conceded that he is going to have to “consider” the deployment of ground troops to Iraq, though he reiterated that they would not be “combat troops.”

The distinction is increasingly ill-defined, as there are in point of fact already some 3,000 US ground troops in Iraq, and some of them are already on the front lines in the Anbar Province in an “advisory” capacity.

Americans need to pay attention and ask the right questions…..

Item 2–Hagel has said that the Us needs a “game changing technology”…..some please ask him what the Hell that is…..

Despite spending several times more on its military than anyone else, Secretary of Defense Chuck Hagel believes the US military advantage is not nearly overwhelming enough, and warns Russia and/or China are both gaining on them.

Hagel insists that what the US really needs is some sort of new game-changing military technology that will ensure that the Pentagon “overmatches” the other nations for decades to come.

And does this apply to the fight with ISIS?

The Islamic State (Isis) has recruited an army hundreds of thousands strong, far larger than previous estimates by the CIA, according to a senior Kurdish leader. He said the ability of Isis to attack on many widely separated fronts in Iraq and Syria at the same time shows that the number of militant fighters is at least 200,000, seven or eight times bigger than foreign in intelligence estimates of up to 31,500 men.

Fuad Hussein, the chief of staff of the Kurdish President Massoud Barzani said in an exclusive interview with The Independent on Sunday that “I am talking about hundreds of thousands of fighters because they are able to mobilise Arab young men in the territory they have taken.”

This to me is a ploy to get more cash and assistance…..ISIS has a large army bit that figure is a bit too high…..

Item 4–Even with the extra fighters Kobane is a stalemate….tit for tat…back and forth……

BEIRUT // ISIL is locked in a war of attrition in the Syrian border town of Kobani, where Kurdish fighters backed by US-led airstrikes are mounting fierce resistance.

“[ISIL] controls more than half of the town but is unable to advance further,” he said. Buoyed by a string of victories in Syria and Iraq, ISIL launched a major offensive on September 16 to seize Kobani and expand its self-proclaimed Islamic “caliphate”.

The militants believed they would quickly conquer the small town in northern Syria, which was little known to the outside world before the deadly fighting broke out.

And have you noticed that the news is dwindling…..why?

Item 5–We, the public, hear constantly about the effectiveness of the Coalition airstrikes….but Jane’s see it another way…..

The US air war in Iraq is not leading to any tangible results in slowing ISIS’ ability to carry out attacks, according to analysts from IHS Jane’s Terrorism and Insurgency Center (JTIC).

Analysts there, including JTIC head Matthew Herman, say that ISIS has showed they are still “calling the shots” in Iraq, and that the number of attacks they are carrying out on a monthly basis seems entirely unaffected by the US war.

If anything, the number of attacks has picked up significantly since June, and Jane’s conceded that their own database is likely calculating only a fraction of the overall ISIS campaign.

OOPS!  Not the news that will be made ready available to the general public……

Thanx for your time and attention……

Every president since Woodrow Wilson has used the defense of country and freedom as a way to garner public support for going to war…..but are wars really to defend the country’s freedom?

For way too many years the American voter has been staying away from the mid-term elections……fewer and fewer people are turning out to vote…..some say that the people are starting to realize that the vote is just a way to legitimize the the state…..that nothing is   changing no matter how much the people want it….and then some say that the voter is just getting lazy…..whatever the reason this past election is just damn disgusting…….

Turnout is usually off in non-presidential elections, but this year’s numbers were “abysmally low,” carps the New York Times in an editorial. In fact, they were very nearly historically low. You have to go back 72 years to find a worse percentage for national turnout—this year’s figure was 36.3% vs. 33.9% in 1942. The editors blame “apathy, anger, and frustration at the relentlessly negative tone of the campaigns,” but they also see one big area ripe for improvement.

Generally speaking, states that made the voting process easier for residents had better turnout. Colorado, for instance, allowed people to vote by mail for the first time and ended up No. 4 in the nation. Early voting also seems to help. The formula for better turnout, then, is easy to state if not execute: “Politicians need to stop suppressing the vote, make the process of voting as easy as possible, and run campaigns that stand for something.” Click for the full editorial.

Personally, I just think that Americans could care less…..they do not feel that voting is as important as we pretend it is……

Opinion?  What do you think the problem is with the American voter?

My friend over at Ace News Room 2014 has posted another of my articles……..

Just How Important Is The Battle For Kobane? | Ace News Room 2014.

I got this ‘toon the other day on Twitter…..could there be a better explanation? 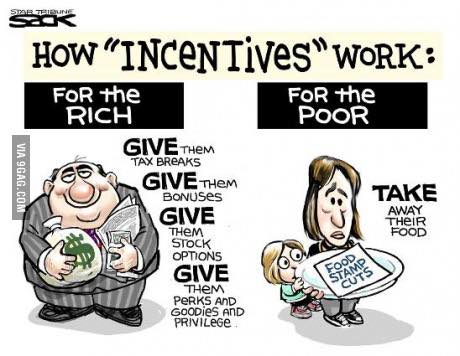 Boycott, Divest and Sanctions (BDS) is a movement to punish Israel for its neglect and punishment of the Palestinian people……but wait!  What is BDS?

In 2005, Palestinian civil society issued a call for a campaign of boycotts, divestment and sanctions (BDS) against Israel until it complies with international law and Palestinian rights. A truly global movement against Israeli Apartheid is rapidly emerging in response to this call.

Learn more
Read the 2005 call in full
What should I boycott?

I am old and cannot get around as I did in my younger days……so I boycott anything Israeli….just my small part……

Sodstream….that cutesy little expensive machine that turns water into some form of soda…..the factory is in the Occupied Territories and is own by an Israeli and the factory uses Palestinians to work the plant at “slave” wages….recent the BDS has done some harm to their bottom line….job well done.

Next is Scarlett Johannson…..she resigned from a humanitarian organization within the UN to become spokesperson for Sodastream……..,I will not watch her movies or anything she does…..tome she is a douche!

Now….if you watch TV you have seen the real estate ads for ReMax…I believe there is a balloon or something featured in the ad…….time for Americans to boycott ReMax……

Active in the Israeli market since 1995, RE/MAX sells and rents houses and apartments in colonies reserved exclusively for Jews in the occupied West Bank, including East Jerusalem. Much of that work is coordinated in an office that the Israeli subsidiary of RE/MAX runs in Maale Adumim, a major settlement in the West Bank.

A United Nations report published last year suggested that the firm’s parent company in the US could be “held accountable” for assisting Israel’s crimes. RE/MAX International, which is headquartered in Denver, “has constant interaction and influence” over its franchises around the world. The company also provides “brand name affiliation,” training and other services, according to Richard Falk, the report’s author, who was then the UN special rapporteur for the West Bank and Gaza.

DO NOT let these a/holes profit from the theft of Palestinian land!

There are many other situations that are part of BDS….check them pit and do yopur part to see that the Palestinian people get the justice they deserve.