Crazies every where you look…it is an election after all…..time to drain the brain of manure and RELAX!

When I spend the time to check out then analyze an election….one song comes to mind….almost every time…….Jethro Tull….

Good day and welcome to a new week of the fight against ISIS…….

The 150Kurds after entered the city of Kobane to join the fight…..NO reports of their successes or failure as of yet.

Item 1–SEC of Defense, Chuck Hagel, has given a stark prediction……

“We are living through one of these historic, defining times,” Hagel warned, “We are seeing a new world order – post World War II, post Soviet Union implosion.”

Perpetual war….now there is a wonderful thought, eh?

Item 2–There has been many people both condemning and conratulating the US and the Coalition….depending on whom you choose to believe…….

White House officials are loudly trying to downplay the warnings about their failing Syrian policy made clear in a recent memo by Defense Secretary Chuck Hagel, saying that the policy is definitely working.

“The policy that we have for Assad is really clear: We believe that he’s lost the legitimacy to lead,” insisted White House spokesman Josh Earnest. Hagel’s memo warned that the White House insistence on being anti-Assad was being undercut by the war effort helping Assad.

The memo further warned that the US has no end game strategy for the conflict, something which didn’t seem to be seriously contested by the White House, which continues to talk up an extremely long war with no end in sight.

Personally, I think that their analysis is a bit too optimistic for a pessimistic situation…..

Iraq’s most senior Shi’ite cleric called on the government on Friday to rush to the aid of Sunni tribes battling Islamic State, after the militant group executed at least 220 tribesmen west of Baghdad this week.

Grand Ayatollah Ali al-Sistani’s comments show how the threat posed by Islamic State, which follows an ultra-hardline version of Sunni Islam, has pushed some Shi’ites and Sunnis to overcome their sectarian differences and face a common enemy.

If it can be accomplished then this situation could be the best years since the beginning.

The Obama Administration continues to insist that its strategy in Syria is “working,” but the setbacks on the ground are growing more dramatic by the day, and the Syrian Revolutionary Front, one of the largest “vetted, moderate” US-backed rebel forces, has been effectively wiped out.

The Revolutionary Front was routed by both ISIS and al-Qaeda’s Jabhat al-Nusra in recent days, and has now surrendered outright after the fall of Deir Sinbal, agreeing to hand over all their weapons and bases to Nusra.

Keep in mind that al-Nusra is an AQ affiliate……couldthe two factions be combining in the war?

In Syria, the prospect of a pro-US counteroffensive against ISIS seems to be permanently on delay for lack of pro-US fighters. Even in Iraq, where the government’s forces are allies, the plans are vague, and a long way out.

US officials say that the current planning is around the idea of mounting a major spring offensive in 2015, with the goal of retaking the major highways and several major cities from ISIS by the end of the year.

Basically, they are saying that the Coalition will be ready for a major offensive against ISIS in 6 months….. I do not see the level of readiness in 6 months…..if it is carried out I can see a major problem…….

I realize that the approaching election may seem important…..and to some it is….but to ignore the situation in the Middle east shows a seriousness  of folly….the election will be over in a week but this war will be going and going…..possibly for the next 20 years.

That concludes today’s briefing….more to come as the events warrant…….

Thanx for your time and attention…….

Tomorrow all of America will go to the polls………and that includes the lucky residents of my state….Mississippi.

This video would be humorous if it were not so damn accurate!

My readers know that I have been pretty tough on the voters of my state…..that because they will vote against their best interests the state is in a perpetual state of sadness……..the voters do not vote top make the state better but instead to keep the state down……to the point of  sad economy…..massive poverty…..terrible health care……poor education and massive poverty….but yet they will not vote to make things better

Glad you asked….this is your typical Mississippi voter……

Title makes it sound like the beginning of some cheesy zombie movie…..but in this case it is something as cheesy as a bad B-movie…..the 2014 mid-term elections.

This week I will not be posting much…..because of the vote I want to try and get a feel of the country by talking with those that took the election seriously……..

Tomorrow the country will go to the polls and cast their votes for this loser or that and in the end we will have what will be the most worthless Congress ever!

We will have lots to consider….voting rights, birth control, gender problems, spending and of course least we forget a NEW WAR…….

I know many of us are leaning toward the conservative way of governance….you know that tired old talking point of smaller government….to this day not one person has explained what that means beyond the talking point…..if you are considering the conservative alternative then I suggest the you go look at the region of the country that lives and breathes conservatism….the South.

Hopefully you will spend a little time and verify what I say…….probably not but I had to try to educate you.

Want to find an easier way to check what I claim….then look NO further than KANSAS!

The governor of Kansas, a staunch conservative, Brownback is living proof of what a “smaller government” will look like in the USA…….

Once in office, Brownback surprised critics and supporters alike with the fervor of his pursuit of power, pushing what reporter John Gramlich of Stateline described as perhaps “the boldest agenda of any governor in the nation”: gutting spending on social services and education, privatizing the state’s Medicaid system, undermining the teacher’s union, becoming the only state to entirely abolish funding for the arts, boasting that he would sign any anti-abortion bill that crossed his desk, and – most significantly – pushing through the largest package of tax cuts in Kansas history. His avowed goal is to eliminate the state income tax altogether, a move that many predict will torpedo the budget and engender even more draconian cuts in spending. “Other Republican-led states have experimented with many of the same changes,” Gramlich pointed out – the difference in Kansas being that Brownback “wants to make all of those changes simultaneously.”

And that sports fans is what the country will look like if the conservatives ever take complete control…….Kansas is so bad off that they have resulted in selling of confiscated sex equipment to try and fund their government.

Apparently, no one realizes that if their is reduced revenues for the government then we have a looming problem like the Ebola thing…….why do you think that we seem to be unprepared for this occurrence?

Your vote is just that……. your vote…….. but I beg you to think about what is at stake and educate to the problems and the issues.

The country is watching!

Reminder:  tomorrow is election day…….the future is in your hands……please do the right thing.

I am always amused by the Right wing mental midgets….and almost all of them are viewers of FOX news….could there be a correlation there?

I got this the other day on my Twitter machine…….It ask a valid question and makes a valid point.  I think maybe she needs spell check….whatcha think? 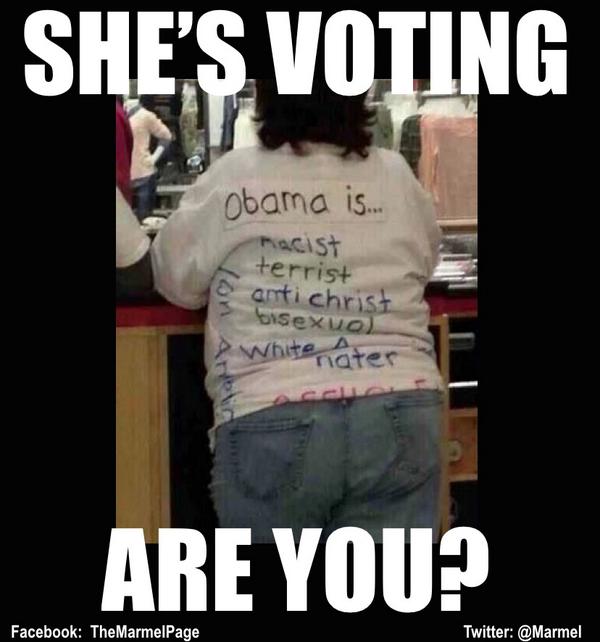