The war drums are beating slowly and quietly…….but that is gonna change……

The hawks of this country are starting to beat those war drums….again!  That could possibly lead to massive protests……will history repeat itself?

After my return home from Vietnam….I became one of those long hard “hippie commies” and protested the war….unless you are an old fart you probably have NO idea what I am talking about…..if you are one of those that has no idea….then please watch this vid….

We Americans use to know how to protest….not anymore now we start a blog and bitch until we tire and then move on……..

A Brief History of GI Resistance During the Vietnam War | Common Dreams.

There is a bleak future awaiting the US if things do not change…….we could go along with the Right wing and say it is because of liberals……..or we could go in another direction and blame the constant games played by the ea Party and its mentally slow supporters…….but the truth is….it is everyone’s fault….basically because of education…you remember that issue….the one we dedicate weeks and months and seminars and ….stuff….and we still cannot get it right……and since we cannot it will have a far reaching result…….

The Pentagon says that if all 34 million Americans aged 17 to 24 tried to join the military, it would reject more than two-thirds of them for being fat, uneducated, felonious, on drugs, or for assorted other reasons—even before it got around to weeding out the ones with neck tattoos. “The quality of people willing to serve has been declining rapidly,” complains the commanding general of US Army Recruiting Command, which estimates that 71% of today’s young people would fail to qualify for service, not including those turned down because of tattoos, ear gauges, or other cosmetic issues.

Around a quarter of high school graduates don’t have the basic math and reading skills needed to pass the Armed Forces Qualification Test, the military says, but the biggest reason for disqualification is obesity. In the past, a “drill sergeant could literally run the weight off a soldier as part of the regular training program,” a retired major tells the Wall Street Journal, but now, people who are 50 pounds or more overweight turn up at recruiting offices. Military recruiters, aided by enlistment bonuses, have still been meeting their targets in recent years, even though the general in charge of recruiting estimates that only 1% of American youth are both “eligible and inclined to have a conversation with us.”

There you go…..we have an ALL volunteer military and few can serve because we have a suck ass education system……..now i wait to see what the right wing has to say….ater all they are the biggest obstacle to a good education for our students……..what will their retort be…..or will they just ignore the findings?  My guess?  They will ignore and ignore hard!

Saw this on Twitter and could not resist….I may not agree with a lot of what Obama has done…….but it is a damn sight better than we would have had with the alternatives……. 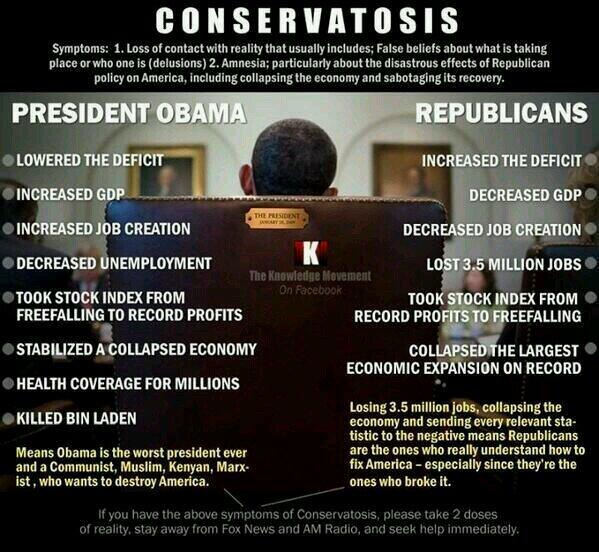 I was right!  There are key words that some look for before they read and if it does not fit their belief system they will attack……I like that about them…..gives me so much joy…..

Sorry, I digress….SCOTUS has handed down its ruling on the hobby lobby issue…..and if you were surprised by the ruling then you are most likely a brain dead turnip…..but what does it all mean?

The Supreme Court delivered another explosive decision today, ruling that closely-held corporations like Hobby Lobby can duck ObamaCare’s mandate to provide insurance that covers birth control. Here’s what the immediate reaction has been among pundits and politicians:

I will bet that most Americans thought their rights were set in stone……surprise…you screwed now!

It is just a joy watching all our rights go down the toilet……..ought be fun to see what else they can take away from us next session…..I can hardly wait.