The situation du jour is the immigration problem with the children coming across the border……and as usual the GOP is turning it into something that can drive up their campaign donations…..when talking about the problem Texas governor Perry said that the situation was Obama’s Katrina…..and then another GOP lackey used the same term when describing the same incident…..talking points are a wonderful thing but at least try to use them in a way that you do not sound like a flipping minor bird……

Any way I got to thinking that I had heard the Katrina reference before when the GOP talks about Obama and whatever situation they are fixating on at the time…….so I decided to do a little research to see what I could find……..and HOLY CRAP!

Katrina Moment No. 1: The financial crisis. The initial Obama response to the financial crisis was framed as Katrina-ish in an encouraging sort of way. Seriously! “Unless and until Barack Obama addresses the full depth of Americans’ anger with his full arsenal of policy smarts and political gifts,” wrote Frank Rich in the NYT, “his presidency and, worse, our economy will be paralyzed.” Honestly, this doesn’t sound wrong.

Katrina Moment No. 2: Swine flu. The swine flu outbreak of April 2009! Sure, you may have forgotten it, but at the time Hugh Hewitt asked whether a botched response would destroy the Obama presidency. “A death toll is a death toll, and if one begins to pile up in the U.S. the at least four-day delay in moving decisively to control legal entry into the country from Mexico will be entered in President Obama’s account.”

Katrina Moment No. 3: The Underwear Bomber. Then-DHS Secretary Janet Napolitano responded to the lucky apprehension of a dim terrorist by saying “the system worked,” inspiring a NYT news analysis about how every flailing administration official was in danger of being compared to Michael “Brownie” Brown. “Hurricane Katrina was a crisis on a different order of magnitude than this event,” wrote Peter Baker, “certainly, but the politics of attack and parry do not dwell on context or proportionality.”

Katrina Moment No. 4: The Haiti earthquake. Opinions were mixed on this one. In early January 2010, Dan Kennedy argued that Haiti was not “Obama’s Katrina,” as Haiti is not part of the United States. (I just checked, and this is still true.) But later in the month, the Wall Street Journal cleared that up with a guest op-ed titled “Haiti: Obama’s Katrina,” and pointing out that “the death toll from Katrina was under 2,000 people” while “deaths in Haiti as of yesterday are at least 150,000.”

Katrina Moment No. 5: The BP oil spill. In the summer of 2010, polling showed the public even more critical of the government response there than it had been toward the Katrina response. “This was, of course, New Orleans’ Katrina and Mississippi’s Katrina,” said Brian Williams during an interview with the president. “And you’re familiar now that it’s getting baked in a little bit in the media that BP was President Obama’s Katrina. And it’s also getting baked in that the administration was slow off the mark. Is that unfair?” Spoiler: He did think it was unfair.

Katrina Moment No. 6: Hurricane Sandy. To be fair, it was mostly just Sean Hannity saying this. “With the horrifying images of Sandy’s devastation now contrasted with the president’s constant campaigning,” he said on Nov. 1, 2012, “this is starting to look like, in my opinion, Obama’s Katrina.” This was before the administration’s response to Sandy, and Chris Christie’s praise for it, helped make New York and New Jersey two of the only states where the Obama vote increased from 2008 to 2012. (The others? Mississippi and Louisiana.)

Katrina Moment No. 7: Benghazi/IRS/NSA. The trinity of scandals that broke out in the late spring 2013 were widely Katrina-fied. “If the president does not soon regain control of the narrative,” wrote Todd Eberly, “he is likely to suffer the same fate as his predecessor — a collapse in public confidence and a vastly diminished second term.”

Katrina Moment No. 8: Obamacare. In November 2013 this meme took on more force and popularity than any that preceded it, especially after progressives fumed at a media conflating a natural disaster with a website delay. Ron Fournier even argued that the website crisis might be Obama’s Katrina and Iraq. “The crises came after a series of unrelated events that had already caused doubt among voters about the presidents,” explained Fournier. “To borrow a cliché, Katrina was the last straw.”

Geez!  The mental midgets in the GOP and the media really need to find new material…….they are really getting desperate…..

Am I the only one that is sick of these word games?  What will it be next week?  Wanna venture a guess?

Damage but No injuries or deaths…….. 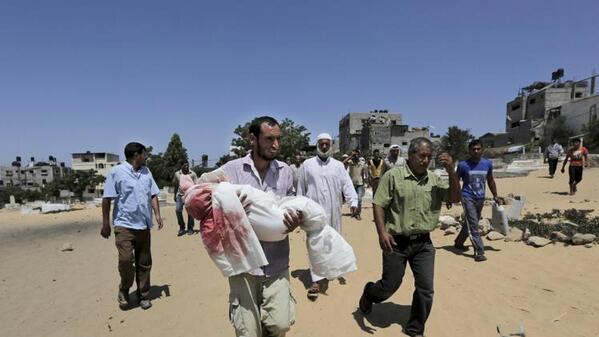 And the world is indifferent…….I weep for the Palestinian people…..

Guess what?  Immigration is still the talk of the town…..that town would be DC…..the rest of us are pretty much taken with trying to survive another day while the Congress fiddles……(that was a Nero reference, in case you missed it)……..well not everybody is sitting around doing other stuff…there is a town in Texas that wants to ban humanity………

As the issue of undocumented children streaming into the US heats up, one Texas town has taken action. League City’s city council last night passed a resolution, 6-2, that would see the city bar any federal request to operate a detention or processing center there, though the Houston Chronicle reports no such requests are known to have been made. The vote followed 90 minutes of what the Galveston County Daily News calls “impassioned pleas” from those on both sides of the argument, with some calling the measure—which cites a “potential threat of communicable diseases reported to be prevalent” among these migrants—”brave” while others described it as an “embarrassment.”

A legal expert tells KHOU the measure doesn’t have much legal footing: “It’s simply not the city’s legal right to tell the federal government what they can and cannot do in the area of immigration. Even states don’t have the authority to do this.” Heidi Thiess, the councilwoman who drafted the measure, says she wanted the city to take preemptive action before any requests came in—and embolden other municipalities to do the same. It seems to be working: Galveston County commissioners voted 4-1 yesterday in favor of a similar resolution, notes the Chronicle. As the paper explains, Border Patrol is required to move unaccompanied children from countries other than Mexico and Canada to the Office of Refugee Resettlement within 72 hours, but the detention network has been unable to keep up with the recent numbers. The feds yesterday looked at an empty Houston middle school as one potential new housing option.

I know that we like to think that we are in control….but I hate to tell Texas this…..but local statutes have NO hold over federal law……sorry, it is that simple.

Why is it always Texas or Arizona that is so full of crack pots and morons?

On another note……the US is doing what it does best……..instead of finding solutions to problems they want to throw money at it…….

The White House had been kicking around the idea of requesting $2 billion to deal with the unprecedented wave of underage immigrants arriving from Central America. Today, in a sign of just how fast the crisis is escalating, it made a formal request to Congress for nearly twice that amount, reports the Washington Post. The $3.7 billion would be divvied up among various agencies with a two-pronged goal: to speed up the deportation process while making sure that the kids get adequate health care in detention centers in the interim. Among other things, the money would be used to send more immigration judges to the border, build more holding centers, and beef up border-security patrols.

More than 50,000 unaccompanied minors and about 40,000 women with children have been caught on the border this year, mostly in Texas, far more than any other year. The White House said yesterday that most would not be allowed to stay, reports the Hill. Congress must approve the money, and a spokesperson for John Boehner suggested that it wouldn’t be a quick vote. “The speaker still supports deploying the National Guard to provide humanitarian support in the affected areas, which this proposal does not address,” he said. The request—see the White House fact sheet here—comes as President Obama prepares to head to Texas. He won’t visit the border, reports the New York Times, but he will now apparently meet with Gov. Rick Perry to discuss the situation. (Meanwhile, the UN wants the US to treat Central Americans as refugees.)

Granted something needs doing about the problem and every attempt should be tried to make sure that these children are treated in a humane fashion……..the main problem is the GOP…….they have bitched and moaned and in the end they do not want to spend the money for an attempt to control the situation……..just look at their fave crisis of last month…the VA.  They got plenty of mileage out of the problem and there is a bill but now they do NOT want to pay for the solution…….the border crisis will be more of the same.

Let me begin by saying of the GOP on immigration……everything out of their mouths and I mean all of them is disingenuous bullshit!

At what point do we as a country get back to policy making?  As it is now we fluctuate from a scandal to scandal….policy is a useless endeavor for our politicians….they had rather spend their time making up falsehoods and accusations…….

It seems that they are about to have a stroke over the children that are coming to America looking for a better life……..they would rather demonize children than find a cure for the problem……it is the cowards way of doing things……..but guess what you twats…….Bush is the reason for the actions being taken by the Obama admin…………

It was one of the final pieces of legislation signed into law by President George W. Bush, a measure that passed without controversy, along with a pension bill and another one calling for national parks to be commemorated on quarters.

“This is a piece of legislation we’re very proud to sign,” a White House spokesman, Tony Fratto, told reporters on Dec. 23, 2008, as the president put his pen to the William Wilberforce Trafficking Victims Protection Reauthorization Act of 2008, named for a 19th-century British abolitionist. “This program has been very effective around the world in trying to stop trafficking in persons.”

Originally pushed by a bipartisan coalition of lawmakers as well as by evangelical groups to combat sex trafficking, the bill gave substantial new protections to children entering the country alone who were not from Mexico or Canada by prohibiting them from being quickly sent back to their country of origin.

Instead, it required that they be given an opportunity to appear at an immigration hearing and consult with an advocate, and it recommended that they have access to counsel. It also required that they be turned over to the care of the Department of Health and Human Services, and the agency was directed to place the minor “in the least restrictive setting that is in the best interest of the child” and to explore reuniting those children with family members.

This constant condemning by the Right of Obama and his actions is silly….no pathetic……it was the hero of the hour GW that gave the government the law that must be followed…..now what would these semi-literate pricks have to say if Obama ignored the law and did what he wanted?

Maybe this problem could be solved if the pathetic GOP would stop using every incident as a political tool and a fundraising tool……just a thought.