More sick sh*t coming out of the Gaza situation….first it was a moron posting on social media and bragging that he had killed 13 kids……and now this piece.

This situation is getting out of hand…..maybe Bibi should reconsider his promises……it can only get worse.

Help to pass this news around…..we will NEVER see it on our media…..it needs to be told to the world……..

Israeli officer: I was right to shoot 13-year-old child | World news | The Guardian.

We all are addicted to something…..drugs, cigs, sex, whiskey and so on……but we Americans have an addiction to……consumerism.  A couple of years ago I wrote a piece entitle “The Real Opiate Of The Masses”…..when I pointed out that Americans were drowning in debt and even with the crash of ’08 nothing would change……we will buy way beyond our means……and guess what?

(Newser) – More than a third of Americans with credit scores have debt “in collections”—meaning one in three of us has been reported to collection agencies, a study finds. That’s a total of 77 million people whose non-mortgage debt is significantly overdue, the Urban Institute notes. The study includes debts ranging from credit card and medical bills to parking tickets, CNNMoney notes. And the widespread issue “can tip employers’ hiring decisions, or whether or not you get that apartment,” an analyst tells the AP.

The average debt is $5,178, the AP notes. The problem exists all over the country, but Southern and Western states are facing the most trouble. Among the report’s findings:

The complete study is here.

The scary part is that NOTHING will change……this addiction is like any other addiction….eventually it will kill the individual….in every sense of the word….KILL!

Once again an avid reader, Phil from thevantagedecade.com, has sent me a ‘toon via Twitter…..Thanx 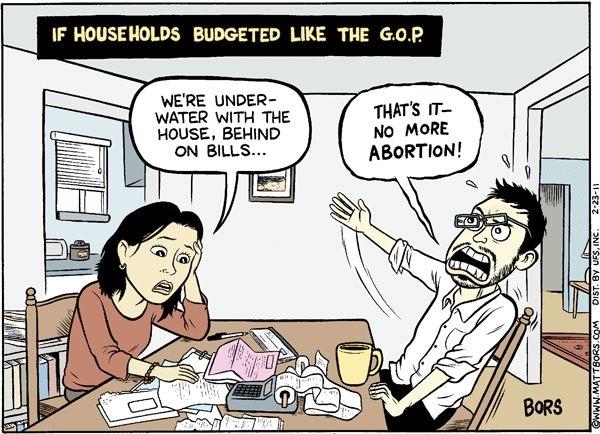 And I do not mean ‘sick’ in a good way……I saw this on Twitter this morning…..will there be an outrage?  If a hoax fine….if not then it is a war crime and punishable by DEATH!

From time to time I will write about situations in my state, Mississippi…….it has always been a poor state and in my opinion it is poor for one reason and one reason only……conservative politics.

Awhile back Mississippians voted down the personhood BS of the GOP….that was a win and then the ultra-conservs set about making it impossible for any abortion clinics to remain open by using a tactic of “emitting privileges”……it worked along with some “standards” that are not required by any other medical clinic….again trying desperately to close the one remaining abortion clinic in the state……but with all this effort by the conservs someone crapped on their parade…….

(Newser) – A law that would have forced the only abortion clinic in Mississippi to close appears doomed after a federal court ruled against it once again. An appeals court panel decided 2-1 that State House Bill 1390, which requires abortion providers to have admitting privileges at local hospitals, would shift Mississippi’s constitutional obligations onto other states by forcing the Jackson clinic to close, CNN reports. “Pre-viability, a woman has the constitutional right to end her pregnancy by abortion,” but the law “effectively extinguishes that right within Mississippi’s borders,” the judges wrote.

The court didn’t strike down the law itself, but “I think the way they ruled on those arguments essentially dooms the law,” a constitutional law expert tells Jackson’s Clarion-Ledger. He describes the ruling as a huge victory for the Jackson clinic, where doctors had been denied admitting privileges by all seven hospitals within a 30-minute drive. Gov. Phil Bryant—who said he wanted the state to be “abortion-free” when he signed the bill into law—says he’s disappointed by the ruling and wants the case to go in front of the entire court instead of a “divided panel of judges.” A similar law goes into effect in Louisiana on Sept. 1, and legal experts believe it won’t face the same issues as the Mississippi law because at least one of the state’s five abortion clinics will be able to remain open, the New Orleans Times-Picayune reports.

But never fear…..the Right is NOT finished…..I am sure they will find yet another BS issue to use to try and close that one remaining clinic…..but for now…..it is a victory for choice.