This is for all those old farts that still support the president…that would be Trump in case you are not sure…..

Trump has liberally used the power of the Executive Order when he cannot get his way from Congress and he has a new idea for his next EO.

A cut in payroll taxes,,,,yes it will give the worker more money but at the same time will begin the gutting of Social Security…..

With congressional negotiations over the next Covid-19 stimulus package still at an impasse, Trump told reporters Thursday that executive orders to suspend the payroll tax, extend boosted unemployment benefits, and reestablish an expired eviction moratorium are “being drawn now” despite questions over whether the president has the authority to unilaterally take any of those actions.

Trump said he expects to sign the orders “tomorrow afternoon or maybe the following morning” if White House negotiators and Democratic leaders don’t reach a deal. Both Democrats and Republicans in Congress have rejected the idea of cutting the payroll tax, the primary funding mechanism for Social Security.

Richard Fiesta, executive director of the Alliance for Retired Americans, said in a statement that “after learning that Democratic and Republican congressional leaders would not go along with his harebrained scheme to cut Social Security’s dedicated funding source, President Trump lashed out and announced he would begin dismantling the system single-handedly.”

Once again the seniors will take a good screwing and yet they will continue to vote for the toads that are raping their benefits.

I am still working on where the logic in that sort of politics….

But I will admit I can see Trump’s point……his proposed EOs…..

The workweek came and went without a deal in Congress for pandemic relief, and that’s despite a two-hour meeting Friday with Nancy Pelosi, Chuck Schumer, Treasury’s Steven Mnuchin, and White House chief of staff Mark Meadows. Afterward, the latter two said they would recommend that Trump issue executive orders, and the president pledged to do just that in a Friday evening press conference, reports USA Today. Details are scarce—including on where the money would come from—but Trump said he planned to tackle four main issues, per the Hill:

Gridlock brought this about……

Trump signed four executive orders to act where Congress hasn’t, contending Washington’s gridlock had compelled him to act as the pandemic undermined the country’s economy and imperiled his November reelection hopes. Perhaps most crucially, Trump moved to continue paying a supplemental federal unemployment benefit for millions of Americans out of work during the outbreak.

However, his order called for up to $400 payments, one-third less than the $600 people had been receiving. Congress allowed those higher payments to lapse on Aug. 1, and negotiations to extend them have been mired in partisan gridlock, with the White House and Democrats miles apart. Now, Trump, who has not spoken with Democratic House Speaker Nancy Pelosi since last year, sought to play the role of election-year savior, with the $400 weekly assistance, as well as a deferral of payroll tax and federal student loan payments and the continuation of a freeze on some evictions during the crisis. “It’s $400 a week, and we’re doing it without the Democrats,” Trump said, asking states to cover 25% of the cost.

This according to the conservs of Lincoln Project……

Stop calling it Washington gridlock…it is the Senate that does nothing and I mean NOTHING…. 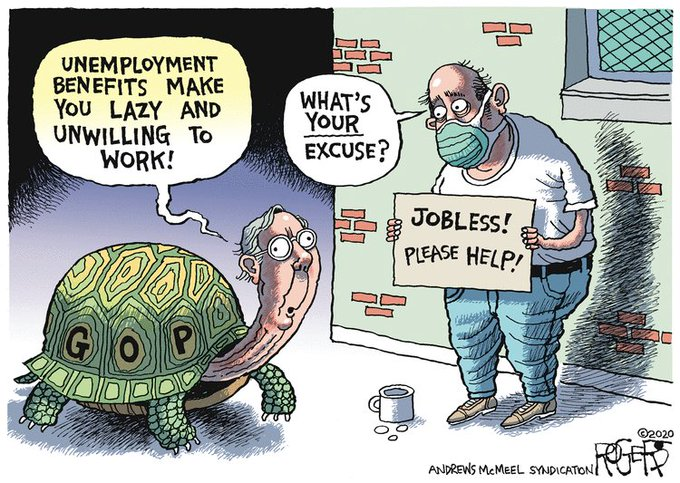 I still think the payroll tax thing is the beginning of the assault on Social Security and Medicare……I give Trump his props for doing what the Congress could not….but I still question his motives.

Something to think about……

President Donald Trump on Saturday afternoon openly vowed to permanently “terminate” the funding mechanism for both Social Security and Medicare if reelected in November—an admission that was seized upon by defenders of the popular safety net programs who have been warning for months that the administration’s threat to suspend the payroll tax in the name of economic relief during the Covid-19 pandemic was really a backdoor sabotage effort.

Announcing and then signing a series of legally dubious executive orders, including an effort to slash the emergency federal unemployment boost by $200 from the $600 previously implemented by Democrats, Trump touted his order for a payroll tax “holiday”—which experts noted would later have to be paid back—but said if he won in November that such a cut would become permanent.

Sorry but I have go to the eye doctor so he can check his handiwork on my eyes…..since that is always a trip in waiting I felt I would re-blog one from my op-ed blog, Gulf South Free Press….hopefully I will return soon…until then please enjoy chuq

Years ago I had this debate with a group here in the South…..it all began when I heard someone bitching about Black music and how irritating it was…..

But it began when a couple of men were talking about mixed race marriages and their offspring…….their big question was which culture is the best to bring up their children?

My first question was what did they mean by culture.

After a few minutes of bumbling and stumbling they moved their conversation to the music.  (okay I got a chuckle out of their awkwardness)

I immediately jumped on this with blaming segregation for these so-called “ills”…..

Here in the South segregation was a enforceable social event.  Blacks were herded into enclaves in cities and towns…..they had the own medical services, education, lingo and music.

These days of yore…have many protests for various topics…racism, environment, education, police brutality….on and on…..and even an antiwar protest from time to time….

Personally I think that this president is handling it all horribly……but there has been social unrest that had to be dealt with by almost every presidential tenure…….starting with our very first president…..the deified George Washington.

The current civil unrest in this country involves violent Marxist and left-wing rioters assaulting and sometimes killing police, vandalizing businesses, defacing and destroying statues and places of worship, threatening and harming innocent citizens, and paralyzing cities like Chicago, Portland, and Seattle, while far-left mayors, governors, and district attorneys do nothing but watch (and sometimes applaud), and place ludicrous restrictions on law enforcement’s ability to restore order. The forces of political rebellion — that, and not the murder of George Floyd, is at the heart of the unrest — seek to overthrow America’s capitalist democratic republic and replace it with their vision of a Marxist/socialist paradise.

Violent civil unrest and political rebellion are not unprecedented in the United States. In 1794, citizens in western Pennsylvania engaged in widespread violence to protest the imposition of taxes on whiskey. But as James Thomas Flexner noted in Washington: The Indispensable Man, the protest against the whiskey tax swiftly transformed into “active class warfare.” The western Pennsylvania frontiersmen targeted the wealthier inhabitants who operated commercial stills and could afford to pay the tax. “An insurrection developed,” Flexner explained, “the still of any man who paid the tax was wrecked, government representatives were seared with hot irons, mail bags were taken at gunpoint and citizens persecuted . . .”

Government ceased to function in western Pennsylvania and the rebels formed “Democratic Societies” that encouraged like-minded citizens to join the rebellion. “There was talk,” Flexner wrote, “of establishing a separate trans-Alleghenian nation, or of marching on Philadelphia to force on the federal government measures dictated by the frontier.”

Most civil unrest was handled without the massive responses…..but apparently those days are gone…..but are they gone forever?

A Chinese people that happen to be Muslims.

Despite an official ideology that recognized them as equal citizens of the communist state, Uighurs have always had an uncomfortable relationship with the authorities in Beijing. In 1933, amid the turbulence of China’s civil wars, Uighur leaders in the ancient Silk Road city of Kashgar declared a short-lived independent Republic of East Turkestan. But Xinjiang was wholly subsumed into the new state forged by China’s victorious Communists after 1949, with Beijing steadily tightening its grip on the oil rich territory. Its official designation as an “autonomous region” belies rigid controls from the central government over Xinjiang, and a policy of settling hundreds of thousands of Han Chinese there that has left the Uighurs comprising a little less than half of the region’s roughly 20 million people.

The Uighurs have deep roots in the region, descending from the ancient Sogdian traders once observed by Marco Polo. Unlike many of the nomadic tribes of Central Asia, the Uighurs are an urban people whose identity crystallized in the oasis towns of the Silk Road. A walk through the bazaars of old Uighur centers such as Kashgar, Khotan or Yarkhand reveals the physical legacy of a people rooted along the first trans-contintental trade route: an astonishing array of hazel and even blue eyes, with blonde or brown or black hair — typically tucked beneath headscarves or the customary Uighur felt cap.

It is believed that the Chinese government has detained up to a million Uighurs over the past few years in what the state defines as “re-education camps”. The government is now also accused of a programme of forced sterilisation against Uighur women.

China initially denied the existence of the camps, before claiming they were a necessary measure against separatist violence in Xinjiang. It also denies carrying out forced sterilisations.

In July 2020, the UK Foreign Secretary Dominic Raab accused China of “gross and egregious” human rights abuses against the Uighurs. The reports of forced sterilisation and wider persecution of the ethnic group were “reminiscent of something not seen for a long time”, he said.

To keep it as simple as possible…..there are 5 things that you should know about the Uighurs…..

… there has been mounting evidence of alleged atrocities at the camps, including torture, rape and forced sterilization. President Donald Trump signed the Uyghur Human Rights Policy Act of 2020 into law on June 17 that aims to punish China for its treatment of the minority group. Now, momentum is growing for the United Nations to take a stand and condemn the alleged atrocities against the ethnic Uighurs.

Here’s what you need to know about the alleged atrocities at the camps.

The Uighurs have been mistreated for decades or longer and yet the leadership of Islam has very little to say about the treatment of fellow Muslims…..

China has stripped away the religious justifications to reveal what was once half-hidden: unadorned and unstoppable power. In many countries, criticising China is the new blasphemy. Nowhere can you see the power more nakedly displayed than in Muslim-majority regimes. Once, they tried to murder blasphemous novelists and screamed about their desire to defend the prophet from the smallest insult. Today, they bend their knees and bite their tongues as China engages in unspeakable atrocities against the largely Muslim Uighur population of western China.

One of the great crimes of the 21st century is being committed in front of our eyes. We see it, yet we don’t register it. The Chinese Communist party is reverting to type, and reviving the totalitarian fear of the Mao era. To bring down numbers of the largely Muslim Uighurs of Xinjiang, the China scholar Adrian Zenz reports, the Communists are forcing women to be sterilised or fitted with contraceptive devices. If they resist, the state sends them to join the one million Uighur people and other Muslim minorities detained in what the state defines as “re-education” camps. A BBC investigation found that China was separating children from their families so they grew up without understanding Islam.

These people deserve the attention to bring them some relief from their sad treatment at the hands of the Chinese government.

Another Muslim minority that is suffering from governmental abuse…..he Rohingyas will be feature in a later post.