This pandemic has be ravaging this country for damn near half a year……and in that time we have seen and heard all sorts of “secret” remedies…mostly spoken by our leader…..from something like a hydro…….and UV light and drinking bleach….as the virus continues to run rampant through our society Donald the Orange has yet another unproven remedy that he wants to put out there……

You’ve heard of hydroxychloroquine. Now another unproven coronavirus remedy is generating headlines—oleandrin, the extract of the oleander plant. A report by Jonathan Swan of Axios says that a strong ally of the president, MyPillow founder Mike Lindell, arranged an Oval Office meeting between Trump and an exec with a company called Phoenix, which makes the extract. “He was enthusiastic,” Linden tells CNN of Trump, “as he is on everything that’s going to help people.” HUD Secretary Ben Carson, a retired neurosurgeon, is another advocate, according to both outlets. The Axios report says Trump has “expressed enthusiasm” for the FDA to green-light the drug as a treatment or at least as a dietary supplement, though the president himself didn’t seem overly familiar with the subject when asked about it Monday.

“Is it something people are talking about very strongly?” he asked the reporter who raised the question. “We’ll look at it, we’ll look at it, we’re looking at a lot of different things. I will say the FDA has been great. … I have heard that name mentioned, we’ll find out.” No peer-reviewed studies are out on oleandrin, though a non-peer-reviewed one suggested it had some benefit in curbing the virus. The Phoenix exec, Andrew Whitney, promises that a peer-reviewed lab study is coming soon. Lindell, for the record, recently acquired a financial stake in the company. The Washington Post also reported on the Whitney-Trump meeting, and the story quotes a skeptical, unnamed official: “If people were left to their own devices, this would be the next hydroxychloroquine.”

I know everybody is looking for that magic dose that will protect and help us return to the time before masks…..but for God’s sake do NOT take any of these so-called remedies until you talk it over with your doctor.

Being pouty over having to wear a mask or social distance is NO reason to become STUPID! 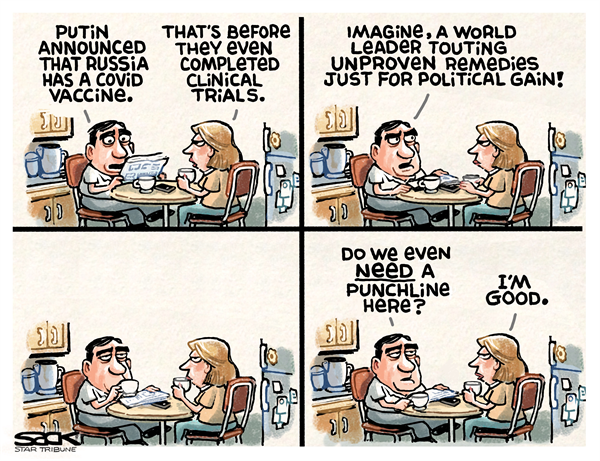 We get lots of news that is wrong…..and then these sources back step to make it seem like we are just not understanding what they are putting down.

One such wrong information is that Kamala Harris is the first black woman in our history to be on a ticket as the VP candidate….this is not true……the year is 1952 and the Progressive Party pick a black woman to share the ticket with Vincent Hallinan…..

Charlotta Bass strode onto a stage in Chicago and gave a speech as the first Black female candidate for Vice President.

As a candidate for the nation’s second highest office under the Progressive Party ticket in 1952, she addressed convention attendees on March 30 that year.
“I stand before you with great pride,” she said. “This is a historic moment in American political life. Historic for myself, for my people, for all women. For the first time in the history of this nation a political party has chosen a Negro woman for the second highest office in the land.”
While Kamala Harris became the first Indian-American and first Black woman this week to run for Vice President on a major party ticket, Bass came before her decades ago in that long-shot bid.
In a nod to her minimal chances of winning, Bass’ campaign slogan was, “Win or lose, we win by raising the issues.” Her party lost to Republican Dwight D. Eisenhower, but her campaign decades ago helped open doors for minority candidates today, according to experts.

https://www.cnn.com/2020/08/14/us/charlotta-bass-kamala-harris-trnd/index.html
Just because Bass was on a alternative party ticket does not diminish the fact that she is the FIRST Black woman on a political ticket mas VP candidate.
Learn about this historic figure…..http://blackhistorynow.com/charlotta-bass/
I Read, I Write, You Know
“lego ergo scribo”

NOTE: I offer this as an illustration how some so-called Americans want to view the institution of slavery in America. Not my ideas or thoughts. Just wanted to let my readers know what is being said and written where they probably do not go on-line. Again NOT my thoughts at all!

This time it is the “Truth About Slavery”…..that title alone should make an intelligent person suspicious.  (In case you are wondering this site would allow Trump to enter from the back)….

We are continually misled by progressive propaganda on the issue of race. Misinformation bleeds over to the conservative realm as well. The media, Hollywood, and academia are consumed with race, tribalism, and hatred for our Founding. The real agenda here is power, divide and conquer to pursue some ill-conceived Utopia.

The truth is that violence is part of the Left’s playbook. They are opportunists and provocateurs ready for any excuse to attack our freedom. Much of the violence we see is a planned political strategy taking advantage of the crisis du jour.

Racism is not our Achilles Heel. It is the ubiquitous manipulation and exploitation of race and racism that threatens our way of life. Political operatives masquerading as journalists feed the hate 24/7.

Sailing against prevailing winds, we continue to search for truth.

The points that this site emphasizes are:

So basically because it was part of the history we need to tolerate the racism that is flourishing in this country.

Tired aging excuse for the institution of slavery and the justification of continued racial inequality in this country.

An interesting read on our Constitution……

The Constitution: A Pro-Slavery or Anti-Slavery Document?

More reading if interested in the history of this country….

There is lots of news these days about Trump and his minions undermining the election process for 2020….almost daily there seems to be a new accusation that the voting process is either being ruined or compromised.

Unless you watch the news every hour then you will most likely miss many of these attempts…..and that is where I come in….

Nate Silver and fivethirtyeight.com have put together a summary of these attempts…..

There has long been conflict in the United States over who gets to vote and how. In the years since Barack Obama’s election as president, those voting debates have become increasingly partisan, with Republican elected officials often pushing measures like requiring photo IDs that make it harder for people to vote, and Democratic officials advancing provisions like same-day registration that make it easier to vote.

That long-running conflict over voting has reached a new, more critical phase for two reasons. First, the outbreak of COVID-19 means that people might be risking their health if they opt to vote in person. Secondly, Donald Trump, unlike previous presidents, regularly breaks with democratic norms and values and is now openly suggesting that he might manipulate the electoral system to help him win a second term.

“Trump aides exploring executive actions to curb voting by mail,” was the headline of an article in Politico last weekend (that was a news article, not an opinion piece). Politico’s reporting found that the White House was considering using executive actions to insert itself into the election process, which is usually run by states, including finding ways to make it harder for people to vote by mail.

I think it’s totally appropriate for people to, well, freak out about the potential undermining of the electoral process by Trump and his allies. That said, there is now a flurry of lawsuits, judicial rulings, decisions by election officials at the local and state levels, and claims of voter fraud and voter suppression that can be a bit of minefield to wade through. It’s a lot and it can get confusing.

Day two of the Dem Convention is pretty much like day one….blah blah yada yada….beat Trump…..but for those that need more let me help out…..

A few big names like Bubba Clinton are on tap for day Two…..

NBC News uses the word “eviscerates” to describe Bill Clinton’s treatment of President Trump during the former president’s speech at night No. 2 of the Democratic National Convention Tuesday. “If you want a president who defines the job as spending hours a day watching TV and zapping people on social media, he’s your man,” Clinton said. “Denying, distracting, and demeaning works great if you’re trying to entertain and inflame. But in a real crisis, it collapses like a house of cards.” NBC notes that the appearance by Clinton, who has spoken at every Democratic convention for more than 30 years, was controversial this year given his history and the #MeToo era. More from the night, which, as the first night, included Republican voices for Joe Biden:

And let’s not forget John McCain’s wife…..but I am not sure if she was just there as a nicety or did she actually endorse Biden…….

Joe Biden and John McCain had an “unlikely friendship,” said Cindy McCain while speaking Tuesday night at the virtual Democratic National Convention. They met when Biden was a young senator and McCain a Senate liaison for the Navy, and their relationship progressed to the point that their families shared backyard picnics—despite Biden and McCain’s political disagreements. “They would just sit and joke. It was like a comedy show, sometimes, to watch the two of them,” Cindy McCain said amid a video montage that included clips of the two men together, per Politico.

Their willingness to reach across the aisle “was a style of legislating and leadership that you don’t find much any more,” she continued. However, Fox News notes the longtime Republican stopped short of formally endorsing Biden, though Politico says it’s “unclear” whether her appearance was meant to be taken as such an endorsement. Both Cindy McCain and daughter Meghan have openly criticized President Trump (a major John McCain foe), but while Meghan McCain confirmed she will be voting for Biden in November, Cindy McCain has previously pushed back against reports that she would be throwing her support behind him

AOC had 60 seconds and that was by design….the DNC is scared to death of AOC for her leadership and policies……DNC did not want to give her a good spot as a platform.

All in all Day Two is in the bag…..and Wednesday will be the big nite for ex-President Obama will speak……

Finally, the Dems foreign policy was about yesterday with Powell and John Kerry…..needed to be more forward looking….a disappointment for me.