Eighty years ago here, on August 16, 1940, while World War II was raging but before the United States had entered the war, a platoon of Soldiers completed four days of parachute jumps in a test that led to creation of the Army’s elite paratrooper units, known as the Airborne.

Russia and Germany already had parachute forces, and now the United States, not yet in the war, sought to build such a force of its own.

It established the U.S. Army Parachute Test Platoon, which began that first series of test jumps that ran from Aug. 13 through Aug. 16. Soon, U.S. Army Airborne units were formed.

Later, with the nation in the war on both sides of the globe, it was some of those same units that made history parachuting into the darkness over Nazi-occupied France on D-Day, June 6, 1944. They seized key terrain and disrupted German communications ahead of the massive Allied amphibious landings that began hours later on the Normandy coast.

The day holds additional importance for Fort Benning, which, because of the test platoon, counts itself proudly as “the birthplace” of America’s Airborne. Moreover, it’s also home of the U.S. Army Airborne School, which trains paratroopers for the Army and for the other armed services.

“First and foremost, Fort Benning is the birthplace of the Airborne,” said Command Sgt. Maj. Robert K. Fortenberry, senior enlisted leader of the prestigious U.S. Army Infantry School here, and himself a veteran paratrooper and Infantry Soldier. The Airborne School is part of the Infantry School.

As this year’s National Airborne Day approached, Fortenberry reflected on the special role and qualities of the Airborne.

Being able to drop paratroopers into combat affords a relatively quick way to get a tough fighting force right in over the enemy’s head and landing in his backyard, there to wreak immediate havoc.

Airborne Troopers we thank you!

Since I do not like Biden or his VP pick I bet you guys think that this is some how a post about the things that is wrong with Kamala, right?  (That has already been written)

Oh you guys would be sooooo wrong!

This Kamala is a Mississippi native……

This Kamala is Kamala the Ugandan Giant…a wrestler from the good old days of pro wrestling.

James Harris, a former professional wrestler best known as Kamala, the “Ugandan Giant,” has died. He was 70.

“Unfortunately, the rumors were correct,” Kenny Casanova, coauthor of Harris’ autobiography, Kamala Speaks, wrote on Facebook. “To make matters worse, it was Corona that took him; he was one of the good ones.”

Harris shot to fame in the 1980s heyday of pro wrestling, battling superstars such as Hulk Hogan, Andre the Giant and The Undertaker for World Wrestling Entertainment, then known as the WWF, or World Wrestling Federation

Wrestling icon Bret “The Hitman” Hart said Harris played “a terrifying monster” in the ring, with his tribal mask, face paint and body paint on his 6′7”, 380-pound frame. But the reality couldn’t have been more different.

Those were the days of Cowboy Bob Kelly, Junkyard Dog, Stagger Lee, Hacksaw Jim Duggan, etc etc. when pro-wrestling was done at National Guard armories….okay I am dating myself.

Kamala, Thanx for the memories.

In closing some great old blues…..2 and half hours of great music…..enjoy

And now the school year is here and the students attend class….then things got bad…..

According to the Sun Herald, the students will stay at home and quarantine until the teacher’s COVID-19 test results come back. If the teacher tests positive, they will spend 14 days in quarantine.

The students did not necessarily have significant exposure to the teacher showing symptoms.

We have seen those people that get violent when told they must wear a mask in public…..well some have decide to end this from the moronic cowards that will not wear a mask when told…..

Assault or physically threaten a retail worker over something related to the coronavirus pandemic? In Illinois, that’ll be a felony. The state last week signed a new measure into law, and now any assault or battery against a retail worker over public health guidance—including mask mandates or social distancing requirements—will be considered aggravated battery, which is typically a felony in the state and can lead to a prison sentence of two to five years, CNN reports. Simple battery, by contrast, is a misdemeanor, Business Insider reports.

As customers increasingly lash out at store employees over COVID-19 measures, this move “sends the message that it’s vitally important for workers to be both respected and protected while serving on the front lines,” the governor says in a press release. And since, in Illinois, making physical contact in an “insulting or provoking nature” can be considered battery, a shopper doesn’t necessarily have to actually get violent in order for the measure to take effect.

Good for Illinois….it should be a federal crime as well…..but that will not happen with the toads like Barr at DoJ and a clueless president.

What if you could inhale a preventative med?

Imagine: An antiviral inhaler that could protect you from the coronavirus. One puff a day that keeps COVID away?

If it sounds like a distant dream, wake up: A team of scientists from the University of California, San Francisco claim to have created it.

The scientists developed a tiny molecule that they say can latch onto SARS-CoV-2, the coronavirus that causes COVID-19, and make it impossible for the virus to infect human cells. There’s a hell of a lot of testing left to go before their treatment reaches shelves, but the team suspects that a single puff from the inhaler every day could keep people safe until a vaccine is finally ready.

Have you had a problem with lions attacking your cows?  Well farmers in Botswana have a low tech approach that is working….

Want to save cattle from predatory attacks? First, paint eyeballs on their butts. Then see what happens. That’s pretty much the gist of a new study out of Botswana—and it worked, Happy Mag reports. Researchers at the University of South Wales painted the eyes on cow butts to stop big cats like lions, leopards, cheetahs, and hyenas from turning the cattle into lunch. In fact, the scientists tried it on 14 different herds, dividing each into three groups: one with butt eyes, one with a cross on the backside, and one au naturel. Over four years, none of the cows with extra eyes were attacked, compared to four with the cross and 15 left unmarked.

The study replicates so-called “eye-spots” on birds and butterflies that make assailants think they’re being watched. It also resembles the old Aussie trick of wearing sunglasses on the back of the head to ward off magpie attacks. But this is “the first time eyespots have been shown to deter large mammalian predators,” study author Cameron Radford says in a press release. “We think this may suggest the presence of an inherent response to eyes that could be exploited to modify behavior in practical situations—such as to prevent human-wildlife conflicts, and reduce criminal activity in humans.” It’s unknown whether big cats can figure out the trick, but for now, farmers appear to have a simple, low-cost way of defending their cattle. 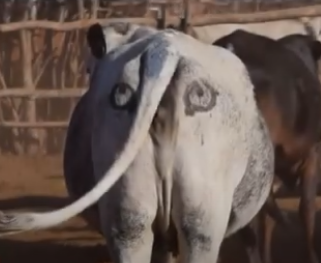 That is the news…mostly that you cannot use…..I need to go outside….the grill is waiting……

But that is not the point….it seems that froze wings are riddled with Covid-19…..

If you’re in Shenzhen, China, think twice about buying imported chicken wings—which might just contain the coronavirus, CNN reports. That’s according to a municipal statement that a surface sample of frozen wings from Brazil tested positive Wednesday during a screening in the city’s Longgang district. Health officials say they quickly traced people who may have touched the product, and all tested negative; similar products were cordoned off and also came back negative. Bloomberg reports the product hails from an Aurora Alimentos plant in southern Brazil—a nation with 3.1 million reported coronavirus cases, second only to the US worldwide.

China has spotted seven cases of the virus on the packaging of imported seafood products since July, per state media, but major health authorities including the CDC and WHO say the chance of catching COVID-19 from food remains low. “There is no evidence to date of viruses that cause respiratory illnesses being transmitted via food or food packaging,” says the WHO. “Coronaviruses cannot multiply in food; they need an animal or human host to multiply.” While people can get the disease by touching something and then touching their nose, mouth, or even eyes, the CDC says it isn’t a common way for the virus to spread.

This does not effect me for I cannot see the point of chicken wings….but since they are popular …scratch that….trendy….I thought you might like to know.