Kinda reminds me of a country song by Don Williams….Living On Tulsa Time……but this Tulsa Time is about the crowd at a Trump “rally”…… 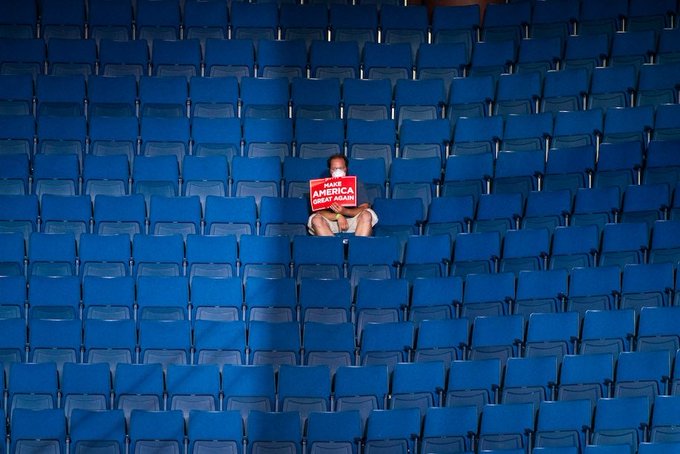 After more than a month of BS around Trump’s re-entry into the world of rallying….the result was far from an overwhelming success.

Compilation of people bragging about a million people signing up for the rally pic.twitter.com/X9EHPSvv8Z

Word was there were a million requests for tickets making the rally sound like a sure fire win for the Donald…..the arena could hold up to 19.000 and a overflow area was set up……the rally was a bust…..less than 7,000 attendees were there….and Donald the Orange is pissed!

Looks like size really does matter—again. In a story that echoes the debate over President Trump’s inauguration crowd, CNN is reporting on competing head counts at Trump’s Saturday rally in Oklahoma. While the Tulsa fire marshal says 6,200 showed up at the Bank of Oklahoma Center, Trump campaign communications director Tim Murtaugh sees it differently: “12,000 people went through the metal detectors so that number is way off,” he says. Team Trump is also blaming “radical” protesters for blocking the entrances, though a Secret Service spokesman says just one arena entrance was temporarily blocked by “several individuals.”

“The local police temporarily closed the gates at that entrance point,” the rep says. “As soon as local law enforcement was able to provide a clear path, the entrance point was reopened and attendees were permitted to enter.” Not surprisingly, Trump was said to be “furious” over the undersized crowd. Multiple people connected to the White House tell NBC News Trump was also angry before the event started, when news broke that six rally workers had tested positive for COVID-19. Public health experts warned the event could become a “super spreader,” and USA Today reports that most attendees didn’t wear masks or observe social-distancing guidelines.

The fireworks over a reignited Trump was a total fizzling dud…..

The mounting threat to his reelection clearly preoccupied Trump in the course of his 107-minute address in Tulsa, which meandered even more than usual. He was clearly far more concerned with his own political survival than with the survival of hundreds of thousands of Americans whose lives are threatened by the worst epidemic in a century. He made no mention of the human toll of the pandemic, which should have led local authorities to ban the rally on public health grounds, while remarking that he had told his aides to slow down the rate of coronavirus testing, which White House officials later claimed was a joke.

Trump began the speech with a declaration that “the silent majority is stronger than ever,” reviving a Nixonian turn of phrase without apparently considering Nixon’s eventual fate as the only president to be forced to resign. Then followed the usual praise of the performance of Wall Street (“the strongest 50 days in the history of the stock market”), always the central focus of the White House.

The president blames others for his stupidity….and I hope the people of Tulsa fair well from this possible exposure.

12 thoughts on “Steaming Over Tulsa!”