We hear more these days about the rise of hate groups and hate incidents of attack…..but just how bad is it?

US counties where President Donald Trump held a campaign rally saw a 226% increase in reported hate crimes over similar counties that did not hold a rally, political scientists at the University of North Texas said in an analysis published in The Washington Post.

According to a study done by University of North Texas professors Regina Branton and Valerie Martinez-Ebers, and PhD candidate Ayal Feinberg, the scientists found that Trump’s statements during the 2016 campaign “may encourage hate crimes” in the respective counties.

The study measured the correlation between counties that hosted a 2016 campaign rally and the crime rates in the months that followed. The scientists used the Anti-Defamation League’s map that measures acts of violence and compared the counties that hosted a rally with others that had similar characteristics, including minority population, location, and active hate groups.

Branton, Martinez-Ebers, and Feinberg noted that their study “cannot be certain” that the marked increase was solely attributed to Trump’s rhetoric. But they also shut down the suggestion that the reported hate crimes were fake.

“In fact, this charge is frequently used as a political tool to dismiss concerns about hate crimes,” the analysis said. “Research shows it is far more likely that hate crime statistics are considerably lower because of underreporting.”

No matter which way you want to cut the info…the fact is that hate crimes are on the rise…blame who you like….but that does not change the facts.(you know those silly things that most people want to ignore in pursuit of political correctness).

There is never good news when I read about a suicide…this time it is an American serving in Israel…..(do not get me started on that deal….the serving not the suicide)……

A 19-year-old American woman serving as a combat soldier in the Israeli army died by suicide last week.

Michaela Levit, 19, is the third Israeli “lone soldier” to die by suicide this year. Lone soldiers are largely expatriates who serve in the Israel Defense Forces while their parents live overseas.

Levit, whose parents reside in Miami, moved to Israel in 2017 and served in a mixed-gender combat battalion.

The Israeli military and soldiers’ advocates denied reports of a “worrying trend” of rising suicide rates among the lone soldiers following two suicides and a deadly drug overdose this year.

Boys are still more likely to kill themselves than girls are, but a new study has found a change in the established patterns, CNN reports. Suicide rates among girls are climbing faster. An analysis of a database run by the Center for Disease Control and Prevention found that, starting in 2007, the suicide rate for girls age 10 to 14 rose 12.7% per year, compared with 7.1% for boys the same age. For those age 15 to 19, the rate went up 7.9% for girls and 3.5% for boys, said the study, published Friday in JAMA. Suicide is the No. 2 cause of death among those 10 to 19 years old, per the CDC, after accidents and unintentional injuries. Rates of suicide have historically been higher for boys than girls across all age groups, and that remains the case now.

And boys age 15 to 19 still kill themselves with guns much more often than girls do. But girls employ hanging and suffocation in rates nearing those of boys. “What we’re seeing is alarming,” says Donna Ruch, one of the study’s authors, per Time. “On top of the fact that females are thinking about suicide more and attempting suicide more, now they’re actually completing suicide.” The reasons aren’t clear, but the findings illustrate the need for gender-specific suicide prevention strategies, Ruch says. An accompanying editorial also questions whether the rise of social media is playing a role, reports Bloomberg.

It is sad when a young person is so desperate that they think suicide is the only answer….

I sincerely wish there was an easy answer but there is not……we need to do more with our mental health policies and maybe we could help some of these young people before it is too late…..maybe not in Israel but in this country.

AS Memorial Day approached the US Army thought it would try something new….it ran a survey that asked veterans on Twitter a simple question…..the answers were not what the Army was hoping to get…..

……..the US Army asked veterans on twitter a simple question, “How has serving impacted you?” As Memorial Day approaches, whoever is in charge of the Army’s social media was probably hoping for some nice responses about all the benefits they think come with serving, college education, the bonds formed with fellow soldiers or the invaluable life experience. But the sad reality that our nations veterans and their families face showed itself in the thousands of heart-breaking replies to the question.

Michael J Neel replied, “26 brothers dead. Only 8 in theater. Psyche ward myself after 3 attempts. Everything we accomplished in Mosul was wasted. Every life we gave was spat on. That’s how serving impacted me.” Veteran Drew Turner said, “Let’s see. Lost the functional use of a hand, developed a rare movement disorder and cancer both likely from burn pit exposure, enjoy sleeping 3 to 4 hours most nights due to nightmares and during the day random anxiety attacks all due to PTSD, 7 herniated discs, arthritis…”

These veterans are begging for help….IS ANYONE LISTENING?
AS I wrote…not exactly what the Army intended……these are the stories the media needs to report and stop cheer leading for war and aggression and adventurism.
And then forgotten heroes that are with us and we choose to look away…..

Every Memorial Day, we remember the great heroes who perished, from Gettysburg to Normandy to the streets of Basra. Our country was founded, defended and defined on the backs of those who gave the ultimate sacrifice for our nation and our freedoms.

We think today of the lives that were cut short. Of the men and women in their twenties who never made it home. The children they never had, or the birthdays and graduations they never saw. We must pause to reflect on those lives that were shortened in the name of letting the rest of us live on. We remember their sacrifice on the battlefields in defense of our nation, as we rightfully should.

Once again these are the stories that should make the news nightly…instead of what a royal baby is named or what shoes some model wore in Cannes.

None of that is life changing or will make a difference in society….so why bother?

A closing thought is mine and mine alone…… 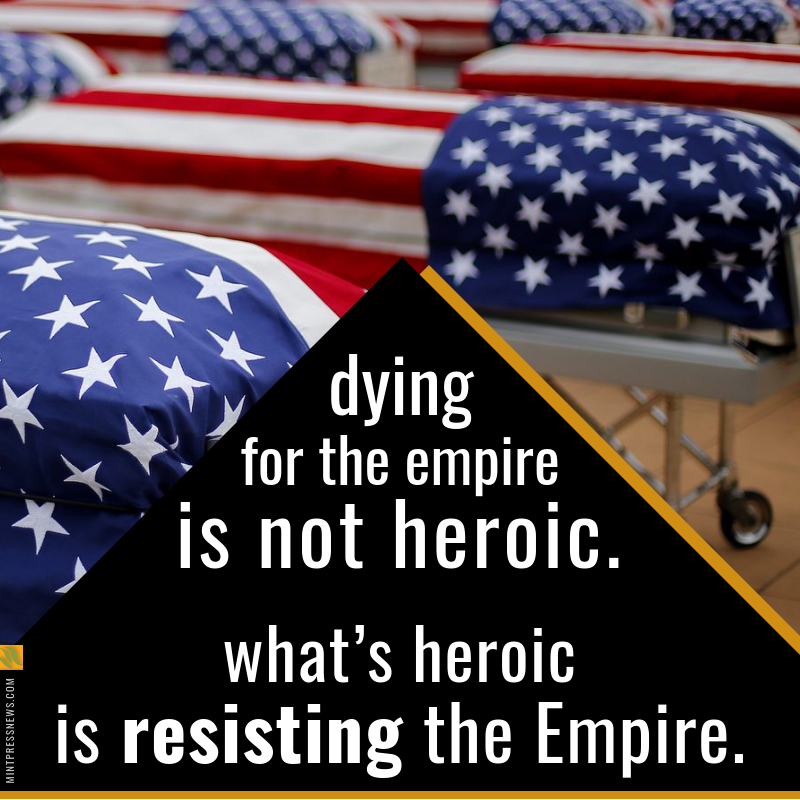 Be a hero and resist the warmongers among us.

Back to work, Professor!

I’ll bet that if you are not an old fart then you have no idea what I mean by the title…..for you ‘younguns’…..

This was an attack by North Vietnam on two naval vessels cruising off their shores….and this incident lead to the mash up that cost 50,000+ American lives……

More information on the incident…..

That is enough history for you….I bring this up because I said that the attacks on the tankers in the Persian Gulf smelled like a new “Tonkin Incident”…..

But to refresh your memory…..

With the US having signed off on another 1,500 ground troops being sent to the Middle East, some justification is needed. A top Pentagon official is relying on previous speculation to make this all look very official.

Vice Admiral Michael Gilday told reporters that the US has “very high confidence” that recent sabotage of oil tankers off the coast of the United Arab Emirates was done by the Iranian Revolutionary Guard. He also claimed rockets recent fired ib Baghdad were fired by “Iranian proxies.“

Then the president order more troops to the region….and now he, Trump, is using an unclear threat to help sell weapons, that the Congress has said no to, to the Saudis and their lackeys…..

In a move predicted earlier this week by members of Congress, President Trump has declared a “national emergency” for the sole reason of circumventing Congressional restrictions on arms sales, and using it to rush shipments of arms to Saudi Arabia and the United Arab Emirates.

Under the Arms Export Control Act, Congress is supposed to get a 30 day notice ahead of any sales, and can then block shipments. Concerns about war crimes in Yemen mean Saudi arms would be likely to face some effort to block them.

But the law has a loophole in it, which allows the president to declare an “emergency” of any sort he wants, with no oversight on that declaration, and then send the arms over without Congressional notification.

This is a notoriously cheap way to circumvent Congress on arms exports, but several Senators said they expected Trump to make such a move as soon as next week. It appears he decided to get out in front of that move with a declaration on Friday going into the holiday weekend.

We have an emergency according to Trump…..The Trump administration on Friday invoked a rarely used provision in federal law to bypass congressional review of arms sales to Saudi Arabia, citing threats the kingdom faces from Iran. Secretary of State Mike Pompeo notified Congress of the decision to use an emergency loophole in the Arms Export Control Act to move ahead with sales of $7 billion in precision guided munitions, other bombs and ammunition and aircraft maintenance support to Saudi Arabia, along with the United Arab Emirates and Jordan, without lawmakers’ approval. Pompeo said, the AP reports, “that an emergency exists which requires the immediate sale” of the weapons “to deter further the malign influence of the government of Iran throughout the Middle East region.” He said the transfers “must occur as quickly as possible in order to deter further Iranian adventurism.”  (If anybody can recognize “adventurism” it is the American war machine….we have been committing it for over 5 decades)…….

So the weapons could be sold….the State Department withheld info from Congress……

The US State Department missed a deadline today to explain to the heads of multiple Congressional committees why the Iran section of their arms control report contradicted all available information from US intelligence agencies.

The report came out in mid-April, and was immediately contested by a number of officials. Intelligence officials said the report was “skewed” in such a way as to justify military action against Iran. They also said that the text indicated that the State Department had totally ignored all intelligence assessments on Iran, and just wrote the report in a way that would fit the narrative.

At the time, the State Department refused to address the allegations from other officials, and claimed the report included “all relevant information,” suggesting they didn’t consider intelligence reports that didn’t agree with the conclusion they were supposed to come up with relevant enough to mention.

Ignoring Congressional calls for clarification is a growing problem throughout the administration. Repeatedly, the administration has been given direct questions by Congress, or members thereof, with specific deadlines, and just let those deadlines go with neither a response, nor an explanation as to why they didn’t respond.

Could it be missed because the intel will not confirm that lie being sold?

A piece of evidence in the Trump administration’s case against Iran may be less than it seems.

The Trump administration announced Friday that it is sending 1,500 new troops to the Persian Gulf and authorizing new arms sales to Saudi Arabia and the United Arab Emirates in order to counter a rising Iranian threat in the region. But satellite images provided exclusively to The Daily Beast by the company Planet Labs show that a component of the administration’s description of Iran’s aggressive behavior—an apparent positioning of Iranian missiles onto boats—may not be as clear in commercial imagery as anonymous administration officials claimed it to be in statements to other publications.

Sorry, but I have heard all this before….and it did not end well for 50,000+ Americans…..we cannot let it happen yet again!