For my last post of the day….I would like to return to my ranting about the new strategic fighter, the F-35……..or as I like to call it….the expensive brick!

When I heard the the US military was thinking about replacing the A-10 Warthog with the ultra-modern F-35 I went into full ranting mode….I have been defending the honor of the Warthog…..but in case you missed some of the post I have written….a little reminder……

Source: In Defense Of The ‘Hog – In Saner Thought

I seldom have much good to say about the Repubs in Congress…..but I will come to the aid of Sen. Kelly Ayotte, R-NH, has put a whammy on the Pentagon about the F-35……

One of the central issues in the debate over retiring the U.S. Air Force’s A-10 attack jet has been whether or not the new F-35 Joint Strike Fighter will be an adequate replacement to perform the close air support mission.

The program office has issued a number of conflicting statements on the issue. And in this week’s Senate Armed Services Committee update on the F-35 program, the most heated exchange came when Sen. Kelly Ayotte, a New Hampshire Republican, sought clarification about conflicting statements Air Force leaders made regarding the mission — and which aircraft would perform it.

Source: Senator Demands to Know — Is the F-35 Supposed to Replace the A-10 or Not? — War Is Boring

The ‘Hog can continue its mission with only one engine….the F-35 cannot successfully reject the pilot when in trouble…….the F-35 is a BRICK!

Finally someone is putting the Pentagon on the spot for their attempt to replace the best thing that can happen in combat…..the ‘Hog shows up in close ground support o the troops.

The A-10 can be upgraded for a fraction of the cost of a piece crap that is making NO progress in a “new” weapon for close ground support…..why ditch what works?

Here’s an idea….ask a grunt which he would prefer to see come to his/her rescue……I will wager that the A-10 wins hands down.

If one truly wants what is best for our troops….then the A-10 is your choice.  Period!

I am one of those tenacious bloggers that when I have a situation in my sights and I refuse to turn away….too many are committed to a situation until a new arises then they forsake the one in pursuit of the later……that ain’t me!

Back before Desert Storm I wrote about what the public needed to watch to see just how they would sell the necessity for war…..no one listened and then they started bitching about going to war in the first place…..I have not ceased in all those years……telling people that they will sell a war to the public for it is easier to commit Americans to fight and die with a positive public opinion.

All I can say is if one pays attention then one will seldom be surprised….especially when it comes to war.

“Every war when it comes, or before it comes, is represented not as a war but as an act of self-defense against a homicidal maniac.”
-George Orwell

Regardless of who leads us, the arms industry, paired with warmongering politicians and their media enablers are always trying to shape the conversation around war and peace in favor of the former.

Source: “Not in Our Name!” How Neoconservatives and Liberal Hawks Use Lies to Sell Wars – NationofChange | Progressive Change Through Positive Action

“There are suckers born every minute”….an war is NO different. 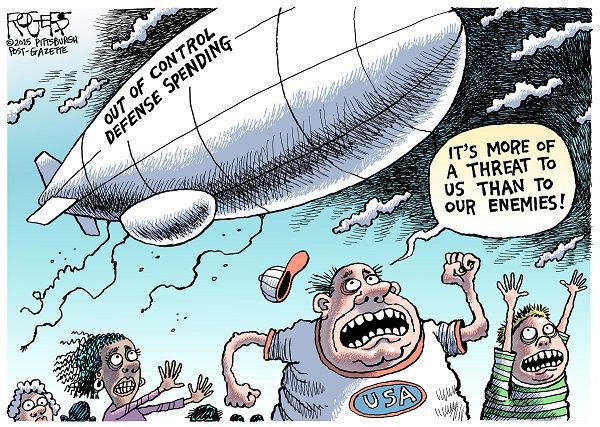 I know I have been going on about the state of the journalistic world…….most of us realize that the news is manipulated by the corporate owned channels for the control of the societal paradigm.

But can there be “objective” journalism?

Every journalist has a political point-of-view and they don’t magically check that at the door the minute they land a job. Many pretend to pursue some noble cause of pure “objectivity,” but it is truly in vain. Every good journalist is informed about what the subjects they cover and it would be near-impossible to be informed and not have an opinion.

There is also the more indirect form of tipping your hand: selection bias. For example: some would say Fox News’ “hard news” hours spent way too much time harping on the Benghazi attacks over the last month; others would say MSNBC’s “hard news” programming, in addition to all the traditionally “liberal” broadcast network newscasts, outright ignored the story.

So basically….NO….there is no objectivity in the news reporting game.

One of the best examples of this non-objectivity is the Iraq War……news is tightly controlled to allow only the approved paradigm to be presented to the public.

Are you a liberal?  Maybe a conservative?  Probably you are neither but rather what we political scientists call neoliberal.

That is right both of our major parties are basically living under the tenets of neoliberalism…..

The main points of neo-liberalism include:

Our conservs live and die, at election time, by these tenets……our liberals are not as blatant but they also live by them.

Crisis after crisis is being caused by a failed ideology. But it cannot be stopped without a coherent alternative.

So pervasive has neoliberalism become that we seldom even recognise it as an ideology. We appear to accept the proposition that this utopian, millenarian faith describes a neutral force; a kind of biological law, like Darwin’s theory of evolution. But the philosophy arose as a conscious attempt to reshape human life and shift the locus of power.

Neoliberalism sees competition as the defining characteristic of human relations. It redefines citizens as consumers, whose democratic choices are best exercised by buying and selling, a process that rewards merit and punishes inefficiency. It maintains that “the market” delivers benefits that could never be achieved by planning.

Source: Neoliberalism Is Destroying Almost Everybody’s Lives—How Many People Even Know What It Is? | Alternet

Time for Americans to face up to what is happening in their name….it is not pretty and it is not healthy……time to look for an alternative…..time to put the country back on the track of prosperity.