Since no one wants to talk about the US war machine…..today 99 years ago the US entered into the WW1……some of us will always remember the days when we commit our youth to war…..

Let’s move on to another subject shall we?

Immigration should be one of the most important issues of this election but it has been pushed to the back by the fear generated around refugees and the mindless dribble that the candidates keep trying to push on the pubic…..

Illegal immigration has been in the past a hot button issue…..a lot of mileage has been gotten out of the attacks on the those seeking a better life in this country….the exaggerations have gone full boogie to convince the public that these people are a threat to our way of life, whatever that is….but when did all this begin…all this illegal entry into the country, that is……

To be honest there have always been those that want to sneak into this country for whatever reason they have…if that is so….when did it become the “major” problem that we have today?

One policy and one alone can be blamed for the high influx of illegal immigrants……NAFTA!

NAFTA is that magic bullet promised by Clinton (Bill not Hil) that would make the US a wealthy place to live and give the worker some security…..to put it brutally…He was a f*cking LIAR!

NAFTA, or the North American Free Trade Agreement, was created 20 years ago to expand trade between the United States, Canada and Mexico. Its secondary purpose was to make these countries more competitive in the global marketplace. It has been wildly successful in achieving this. NAFTA is now the largest free trade agreement in the world.

Why, then, is NAFTA so severely criticized? This success has come at a cost. One of the problems with NAFTA is that it’s reduced U.S. jobs. A second disadvantage is that it has exploited Mexico’s farmers and its environment. Find out more about the how and why was NAFTA created, and whether it has successfully fulfilled its purpose.

Article 102 of the NAFTA agreement outlines its purpose:

Eliminate barriers to trade and facilitate the cross-border movement of goods and services.

Create procedures for the resolution of trade disputes.

Establish a framework for further trilateral, regional and multilateral cooperation to expand the trade agreement’s benefit…..

Once the treaty was in full swing then local Mexican farms became less efficient  thus they shut down or were adsorbed by big agri-business and then unemployment set in and work became almost non-existent…..and the trail went North to the US border……

NAFTA was implemented in 1994 and went into full operation…..and the tale of the tape as far as migrants go……

I know that there are many that see all these different reasons for the flow of immigrants….but the truth is there are NO hidden agendas….other than people looking for work and a livelihood….

Americans seem to not be able to put themselves into the mindset of these people and understand what they are doing…..some say they can but to me it appears that they cannot or will not try to understand……but if one can understand why then a solution can be formulated…..

That is my multi-cultural, apologetic, bleeding heart opinion…..

Warning:  this press is from a group that has pro-Russian leanings……as well  as some sources from Europe and Palestine……with that said…..these are still a good pieces on the refugee crisis now being faced by the world….

Plus as this election process enters in the “end time” I am sure that the whole situation around refugees will once again be burning up the blogosphere….but I believe there is more to this refugee thing than who gets who…..

Recently I wrote a post that ask the question…..can migration be used as a weapon?

Source: Is Migration Used As A Weapon? – In Saner Thought

The NEO article takes a look at the issue…..again it is from the perspective of Russia and should be viewed through that prism…..none the less an interesting take on the situation…..

Starting in 2007, the US was already in the process of engineering the overthrow and destruction of all prevailing political orders across the Middle East and North African (MENA) region. It would be in Pulitzer Prize-winning journalist Seymour Hersh’s 2007…

I have been asking a question about the refugee crisis facing the world and in asking the question…”are the refugees being used as a weapon?” I have found many opinions and some excellent work trying to explain the situation……

Russia and Syria are deliberately using migration as an aggressive strategy towards Europe, the senior Nato commander in Europe has said.

US Gen Philip Breedlove said they were “weaponising” migration to destabilise and undermine the continent.

He also suggested that criminals, extremists and fighters were hiding in the flow of migrants.

Of course the main point that many want to make is there may be “bad guys” hiding in the massive amounts of refugees…all waiting to find a new home and once they do they will commence their assaults on the West…..the loudest voices are from people that have NEVER heard a shot fired in anger or witnessed the obscenities of war first hand….instead they take their opinions from puke masters like Breitbart, WND, Infowars and other such hate filled rags.

This situation like most situations in the Middle East has two sides….one the compassionate side and two, a louder warning of extremists attacks from within the numbers of refugees……but there is a story with the militarization of refugees…….

Current events in Syria and the broader Middle East have brought forth the idea of “militarized” refugees.  This is not a new concept but in its present incarnation comes most clearly from General Breedlove – a misnomer if there ever was one – who said, “These indiscriminate weapons used by both Bashar …

Personally, I think that this crisis is one of war in that the flow of refugees are being used to further the agenda of some shadowy figures that have a master plan…..I do not think there is a massive amount of “terrorists” hidden within the ranks….basically just people trying to find a safe place for their families and a better life……do not misunderstand….I am NOT saying there will be no violence from within the ranks of the migrants…just that most are not plotting the demise of the West.

The plan has worked!  The fear that is spreading is turning rational people into extremists themselves…..they are turning on their neighbors and are suspicious of anyone that does not conform to the “approved” thinking….political systems are in disarray and passions are running at a feverish pitch…..all in all using the migrants as a weapon is working and working well.

There is only one sure way to end this crisis…..the problem is no one in the leadership role is willing to suggest it and few will even consider the possibility of end this situation…..until the solution is found there will continue to be this massive movement of people trying to outrun war……

I leave you with a closing quote….”And the things that we fear are used as a weapon against us”…..I realize few want to hear this but it is very true and it is working. 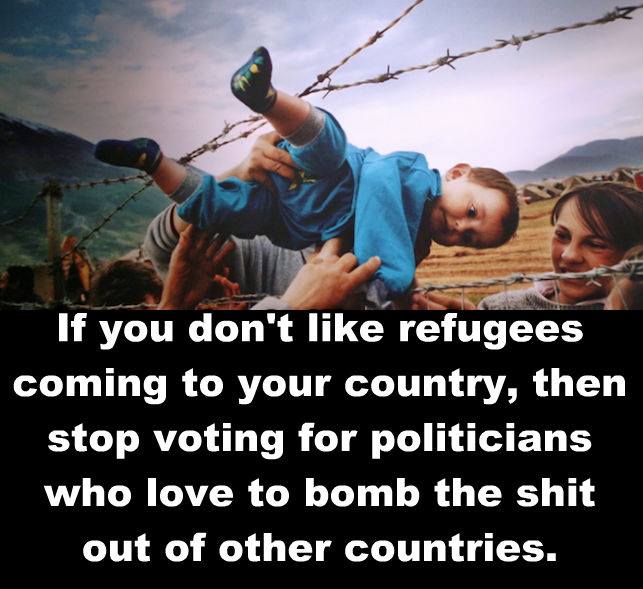 NOTICE:  This press is from the Daily Beast and I have not much luck with the site….for me it sucks but this is a piece of news that I have to get out there.  I apologize if it is a piece of crap for you or your system.

For some time now I have been hearing and reading that there was  massive breech of protocol within the intel community over the vetting of the Syrian “moderate’ rebels…..also that there is some evidence that the US was responsible for the rise of ISIS.

Source: Arms Come To The Rebels – In Saner Thought

Source: “We Will Arm And Train Syrian Rebels” – In Saner Thought

Source: Train The Syrian Rebels……Then What? – In Saner Thought

So far I have not posted much on these allegations….but after reading this article I thought it was time to put the info out there and see what my readers have to say about this turn of events…..

So please read carefully and then let me know what you think about the article….

The scandal over cooked ISIS intelligence just got worse. Now analysts say they’re being forced out for not toeing the Obama administration’s line on the war.

Source: Intel Analysts: We Were Forced Out for Telling the Truth About Obama’s ISIS War – The Daily Beast

Note:  Sorry to say I am under the weather today……so I will be posting some of the drafts that I have saved….hopefully I will return to normal tomorrow.  chuq

The big story this week….that is if you are not one of those that sucks at the election tit……is the release of the so-called “Panama Papers”.

The MSM media makes sure that the world knows that someone close to Russia’s Putin is on the list and somehow don’t mention that so is the King of Saudi Arabia or a leader in the UAE or for that matter the PM of Ukraine…is that because these thieves are considered “allies” of the US?  How much of this cash is US taxpayers cash given as foreign aid?

The “Papers” have already cost the PM of Iceland his job….who will be next?

The “Panama Papers” are the largest leak in world history, revealing millions of documents related to the offshore accounts of politicians, former politicians, and billionaires around the world.

The International Consortium of Investigative Journalists (ICIJ) itself, which first published the data, says it reveals the holdings of “drug dealers, Mafia members, corrupt politicians and tax evaders–and wrongdoing galore.”

Europe seems to be falling apart before the eyes of the world…..in the last year there have been attacks, riots and general unrest.

Europe is dealing with the situation in a way that will lead to further incidents……I have been reading an article (pressed below) in the World Affairs publication and thought that I would press it for my readers to see and possibly comment…..

Europe is at much greater risk of attack than the United States. The lack of civic identity precludes the assimilation necessary to forestall violence, both among Islamic radicals and the far right.

The one thing that has been overlooked by many is that the European attacks were done by CITIZENS of the various countries…..not from some stealthy 5th column that has been infiltrated into the countries.

Side Note:  I the coming weeks, possibly months, I will be writing a series on terrorism…..it will be a rational look at the phenom without all the emotional trappings we are seeing and reading these days.

Please watch for those in the near future…..