It has been a helluva week…..some great comments here on IST…..dealing with the pain of an accident from 10 years ago…..lots of politics to make me ill and some real good exchanges on other blogs….all in all a good week.

I close my week out with a post on something that I found and just could not let it go past without spotlighting it.

For Jews some things are Kosher and some are not….from what I understand, granted not much, there is a certain code that must be followed for anything to be labeled “Kosher”…..method of slaughter, et al…..

I read a piece yesterday that took me aback…..can marijuana ever be Kosher?

Good news, stoners who celebrate Pesach! Rabbi Chaim Kanievsky, whom the Times of Israel identifies as “the leading living ultra-Orthodox halachic authority,” has ruled that marijuana is kosher for Passover. Kanievsky has said pot can be eaten or smoked during the holiday, though there’s one tiny catch: it should be used as part of a medical treatment program

So it is Kosher for Passover and then it is not?

How does that work?  Must it be chopped with a special knife?  Maybe one has to wear some sort of secret underwear…..can something be Kosher once a year?

We were told that the communism/socialism was a bad thing…..that you would be oppressed if it were instituted….and they gave the Russian peasants as an example…..all that propaganda has lead to a situation today in Russia……

A recent poll revealed that most Russians would like to see the return of the Soviet Union and socialism.

The majority of Russians polled in a recent study would prefer living under the Soviet Union and would like to see the socialist system and Soviet state restored.

According to the latest poll conducted by the Levada Center, over 50 percent of Russian citizens believe the collapse of the Soviet Union was bad and could have been avoided. Only 28 percent of the population surveyed feels positive about its collapse, while 16 percent were unable to answer such a complex question.

Does that surprise you?

It shouldn’t!  You see there was a study here in the US and the ages between 18-29 were polled and they said that they would have no problem living with socialism.

Millennials are simply not that alarmed by the idea of socialism. For instance, a national Reason-Rupe survey found that 53 percent of 18- to 29-year-olds view socialism favorably, compared to only a quarter of Americans over 55. A more recent January YouGov survey found that 43 percent of respondents younger than 30 viewed socialism favorably, compared to 32 percent thinking favorably of capitalism.

It is an interesting stat….the problem, for me, is I am not sure that those polled have any idea just what socialism is and how it effects the country.

Back to Russia…..what are the chances of a return to the days of yore and the days of the USSR?  Could Putin make the adjustment?

If communism returns to Russia, just how contentious will the world become?

This is like any other “survey” it will probably change tomorrow….take it with a grain of salt….but it was an interesting survey.

But what does it matter?  Most will wait and see what happens then go about bad mouthing someone….I just think ahead not in reverse.

I have avoided this issue because I think that is a silly thing to worry about…..and second people are too f*cking stupid to make any sort of rational decision….they will base their decisions on emotional baggage they have been carrying around for years.

Even the hero of the Right….the mouth of Manhattan has weighed in on this (odd have not heard many of his supporters mention this anywhere….go figure)……

Donald Trump broke with many of his fellow Republicans on Thursday, saying transgender people should be able to “use the bathroom they feel is appropriate,” the New York Times reports. The Republican frontrunner was addressing North Carolina’s controversial—many would say discriminatory—”bathroom bill” during a town-hall event in New York. He said the state made a big mistake with its law, which has caused economic damage and was unnecessary in the first place. “You leave it the way it is,” he said. “There have been very few complaints the way it is.” He also said he’d be fine with Caitlyn Jenner using whichever restroom at Trump Tower made her comfortable.

All this concern about who uses what bathroom….first of all….how will you know who is using it?

If it is a woman dressed as a man she will use a stall….how will you find out.  Burst into the stall?

If it is a man dressed as a women….she will use a stall (there are NO urinals in a ladies room)….you gonna burst into the stall and exclaim…Ah Ha!

Or maybe you would prefer a strip search before entering the washroom?

Like I said this is a silly issue for small minds.  Me?  I have better things to do than worry about who pees where.

As an opponent for most wars…I am always looking at the reasons why we go to war and why the American people turn a blind eye to it.  (and yes I know all about the M-IC)…..

Now a days when the US goes to war it is not paid for by any stretch of the imagination…..the process skirts Congress and the representatives allow it to be so…..the Constitution addresses war and the Congress is suppose to authorize the action taken…..but for decades that whole process has been ignored…..and by the very people that claim the Constitution is sacred and must be followed to the letter.  (I guess that means only the parts you agree with and f*ck the rest of the document)

How the United States Became a Prisoner of War and Congress Went MIA,

Let’s face it: in times of war, the Constitution tends to take a beating. With the safety or survival of the nation said to be at risk, the basic law of the land — otherwise considered sacrosanct — becomes nonbinding, subject to being waived at the whim of government authorities who are impatient, scared, panicky, or just plain pissed off.

The examples are legion. During the Civil War, Abraham Lincoln arbitrarily suspended the writ of habeas corpus and ignored court orders that took issue with his authority to do so. After U.S. entry into World War I, the administration of Woodrow Wilson mounted a comprehensive effort to crush dissent, shutting down anti-war publications in complete disregard of the First Amendment. Amid the hysteria triggered by Pearl Harbor, Franklin Roosevelt issued an executive order consigning to concentration camps more than 100,000 Japanese-Americans, many of them native-born citizens. Asked in 1944 to review this gross violation of due process, the Supreme Court endorsed the government’s action by a 6-3 vote.

Source: Writing a Blank Check on War for the President – The Unz Review

Ever noticed that the media has no problem calling out “oligarchs” in other countries but for some reason seem to remain silent on the ones here in the US….as if we do not have them…..after all we are a republican democracy….

The people in this country know we have these parasites but our media is working tirelessly to convince us that we are immune to such diseases.

Apparently, other countries, but not the U.S., have oligarchs. Billionaire and Commerce Secretary Penny Pritzker came and went to the National Press Club with hardly a tough question on Monday.

I’d submitted several questions, but first a word on the choreography of the event: Virtually every “news maker” event I recall seeing at the Press Club had the speaker at the head table which is on a stage a few feet up, speaking at a podium. This event, it was just her and the moderator, Press Club President Thomas Burr on two cushy chairs on the stage, with the “head table” below them. Whether this was to elevate the two of them, save her the trouble of having prepared remarks, or perhaps a new thing, an attempt to cast the billionaire in a more casual light — inspired by Davos-type events — I don’t know. But it was weird. [See video and PDF.]

America cannot move forward until a solution to this problem is created….. 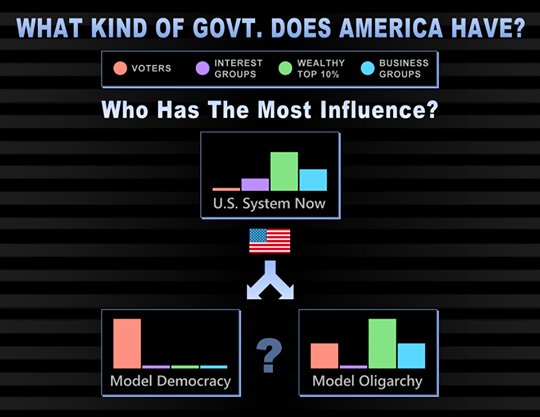