Since the beginning of this thing we are having confronting ISIS I have said that their, the government, response has been knee jerk at best….that there seems to be very little new being applied to a new battlefield….and the government has struggled to find a way to explain it to the adoring public without giving away strategic info…….

With all the criticism the admin boyz have been tapping dancing at a feverish pitch…..now it appears that these people have finally figured out that their words and explanations have been anything but clear and simple…..and now they havew decided that it is time for a “new narrative”……

According to Pentagon officials, they are feverishly at work on a “new narrative” for public discussion about the ongoing war against ISIS, centering on growing criticism of the apparent lack of a concrete plan for how to win the war or any end-game theory.

“To say there’s no strategy is just flat out wrong,” insisted Army Col. Christopher Graves, the public affairs officer for the war, and others say the goal is to present the notion that there is a strategy in place in a “concise, easy to understand way.”

The official narrative on the war has struggled mightily to find its voice so far, in no small part because officials have repeatedly ruled out things like combat troops and “boots on the ground” before announcing deployments into Iraq, and a lot of revision of what was really promised leading President Obama to eventually insist it was only a pledge for no battalions.

It remains to be seen exactly how the Pentagon aims to shift the narrative this time, but conspicuously absent from early conversation on this “new” narrative is laying out exactly what that nebulous strategy to win the war actually is.

And despite Pentagon assurances that they “welcome debate” on the strategy, that’s the one thing that’s least likely to happen, as the administration has so far seemed to base the public narrative of the war on a series of vague pledges to eventually wipe out ISIS in some unspecified way with some unspecified force, all the while escalating in ways that publicly they had insisted were ruled out. There are doubtless more escalations in the cards for the ISIS war, and the Pentagon goal is not to start a debate about that, but rather to convince the public to acquiesce.

Do you buy any of this?  Damn you guys are easy!

This is nothing but a ploy to shut down the criticism and give them time to do an end run on the public…..

You know whenever conservs talk about Jimmy Carter it always a mention of a wimp or worse and it always comes back to the Iranian hostages and the failed rescue attempt……it always the fault of him being a ….wait for it…..a liberal.

Speaking of the hostages….I read a report during the Christmas break about these people……

Survivors of the Iranian hostage crisis will be awarded up to $4.4 million each, more than three decades after their 444 days in captivity. The terms are laid out in a spending bill President Obama signed into law last week, which also includes reparation for victims of other terrorist attacks, including the 1998 US Embassy bombings in East Africa, reports the New York Times. The 1981 agreement that secured the release of those taken hostage at the US Embassy in Tehran on Nov. 4, 1979, barred them from seeking amends. Legal appeals were later blocked, though renewed pleas for compensation followed the release of 2012’s Argo. Finally, when bank BNP Paribas was forced to pay $9 billion for violating sanctions against Iran, Sudan, and Cuba, this year, Congress moved to set aside $1 billion for terrorism victims.

The 37 surviving hostages will receive up to $10,000 per day of captivity, while spouses and children can receive a lump sum of up to $600,000, per the Times. The money should be awarded within a year. “The money can’t bring back family members, or the 444 days of their lives. But it would bring some closure and some justice,” Georgia Sen. Johnny Isakson tells the Telegraph. “I had to pull over to the side of the road, and I basically cried,” a former embassy security guard says of hearing the news, noting it took “36 years, one month, 14 days” for Iran to be held accountable. “I don’t believe that they will ever, ever apologize,” he adds. “They don’t believe that they did anything wrong.” Officials note many of the hostages were tortured and continue to suffer, including from PTSD. The law signed Friday also designates $2.8 billion for victims of the 9/11 attacks and their families.

After I read this I had a thought…..what can we expect from a country that treats its veterans so shabbily or the treatment that the 9/11 first respondents have had to endure…..why would the Iranian hostages get some sort of expedient justice?

Nothing says love or thank you like being screwed for 35 years.  But hey…that is just what we do when people out use their usefulness.

I am sick and tired of our politicians trying to appear to care…they do NOT and NEVER have!  And I am beginning to think badly of the American people as well……

We are in the middle of what some people call “the season of peace and joy”…..the problem is that for most it is only a fleeting concept…..for they want to feel something and they cannot…..

It’s the time of year when people sing about peace and goodwill. Unfortunately in the United States, too little thought accompanies the nice words. Otherwise Americans would be in the streets demanding that President Obama shut down the war machine. They would also be repudiating every presidential candidate who endorses the fundamentals of America’s criminal […]

Source: The Season of Peace Requires Action Not Songs – Antiwar.com Original by — Antiwar.com

Yep…..I am a peace-nik (a slur from the 60-70’s)…..after experiencing the obscenity of war how can one be anything but?

In my younger years I was fortunate enough to work in the Middle East……first in Tunisia then on to Morocco, Egypt, Iraq, Lebanon, Palestine and finally in Syria……I made some very good friends in my time in Syria, the city of Halab (Aleppo to Westerners)……..the city was beautiful and full of history and culture……

Now with the civil war it is painful to see what has become of a once beautiful and serene city…….. 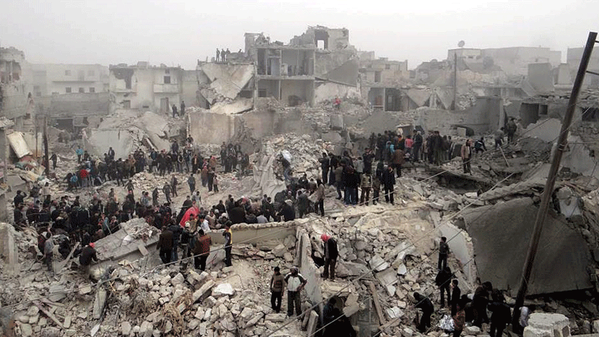 Aleppo will never return to its beauty and historical significance….that is truly sad and just a bit depressing…..