For months I have been drilling Obama about his promise of no US combat troops (notice I use “troops” not boot….these are American sons and daughters they deserve respect and not this crap about footwear)…..I have pointed out that a special ops trooper is by definition a combat troop.

After months of hammering this point it seems that someone got through to them (I would like to believe it was me….but I am not hopeful)……..

Throughout a year and a half of war against ISIS, President Obama’s “no boots on the ground” pledge has been repeatedly revised by officials, initially insisting it meant no troops, then no combat troops, and now, according to President Obama, it simply meant no battlion-level deployments.

Obama now insists he never had any intention not to send combat troops to Iraq and Syria, and that the American people always understood he simply meant deployments would be small and limited to company-sized deployments or smaller.

Obama insists that the latest deployment of troops into Iraq, which the Pentagon has suggested will be in the 100 soldier level, will “squeeze and ultimately destroy” ISIS. During his comments, he continued to play up the idea that the war is going well, insisting ISIS is totally incapable of launching Paris-style attacks within the US.

Finally we have the truth and the recognition of the fact that we do have combat troops operating in both Iraq and Syria….

Thanx for that, Mr. President.

Hot dog!  We can all sleep better tonight!

With all the babble about mass shootings and terrorists delivering pizza the government has come up with a new system to warn us great unwashed about the chances of a terrorist attack…..

The Obama administration will announce a new terror alert system “in the coming days,” Homeland Security Secretary Jeh Johnson said Monday. Johnson said the new alert system will better inform the public about threats to the United States, but he did not provide specific details. This will be the third terror alert system put in place by the Homeland Security Department since the attacks of Sept. 11, 2001. The much maligned color-coded system was replaced in 2011 by the National Threat Advisory System, which has never been used because it requires a “specific, credible threat” to the US in order to be activated. The plan to change the alert system was announced in the wake of the mass shooting in San Bernardino, California, which the FBI has declared a terrorism investigation.

The new effort will include an “intermediate” step, Johnson said in announcing the new alert system during a forum with Defense One magazine. Johnson said while a specific motive has not been determined in the California shooting, the threat from home-grown radicals or those inspired by foreign groups is a growing concern in part because such attacks may not be discovered in advance. The new terror alert system, he said, better “reflects the current environment and current realities. We need a system that adequately informs the public at large … about what we are seeing, what we are doing and what we are asking the public to do about it,” Johnson said.

I need to know more…..for what I see is that this is just another lame attempt to appear as if everything is under control.

This will be the third different “alert system” that we had in place and nothing has stopped the idiots like this dude in California and his whack-out wife……where will this system be any more effective than the ones that preceded it?

I could say that I will sleep better knowing that DHS is one the job…..but that would be disingenuous because I trust NO one but myself….I definitely will not trust the media or either political party to keep me safe…

I will sleep well tonight but it has NOTHING to do with anything but the fact that I know what I am capable of doing if the event arises.

As we all know the Donald was many admirers…..and the Donald speaks the truth….at least that is the common feeling among his supporters…..he is not afraid to open his mouth and tell the world what he thinks…..right?

Well in 1998 in People Magazine Trump told the world what he would do if he ever ran for president….. 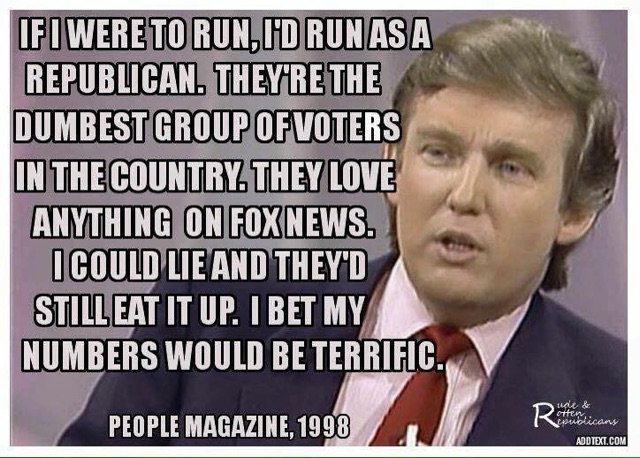 Don’t come down on me….I am just the messenger…..

Maybe he does speak to the truth….after all…..

From the very beginning of the violence in Syria, even before ISIS reared its ugly head, the US has called for a regime change for Syria….”Assad must go” was the chant du jour in the early days.

Source: Syria, the Rise of ISIS, and the Perils of Regime Change | The Nation

SecState Kerry has said that we could defeat ISIS if only Assad was gone….

In new comments today at a European security conference, Secretary of State John Kerry again played up the idea that a political transition in Syria, which he reiterated would have to mean the immediate removal of President Bashar Assad, would be a game-changer for the ongoing war.

Incredibly, Kerry termed the removal of Assad not only a “boon for everyone,” but claimed that ISIS would be totally destroyed “in a matter of months” with this transition toward a rebel-dominated government.

Interestingly, the narrative of a rebel-government unity being the key to beating ISIS had been Russia’s talking point, and spurned by the US, but now the State Department are adopting a variation, with Assad’s removal their primary goal.

This is just chest thumping in my opinion…..is he talking about ISIS in Syria or also in Iraq?  Assad has a huge well trained army…..what will happen to them if Assad is forced to leave?  Do we really believe that they will roll over and play dead?

Now is a scary moment…..I find myself in agreement with Sen. Ted Cruz…..SURPRISE!

Cruz made a statement in an interview that I could not dispute…..

Republican presidential candidate Ted Cruz says the U.S. is more secure with Syrian President Bashar Assad in power, accepting one of the Middle East’s most brutal dictators as an unfortunate ally in the fight against the Islamic State.

The tea party favorite said in an interview with The Associated Press that America and the world would have been better off retaining deposed dictators in Iraq, Egypt and Libya — who committed crimes against their own people but also helped prevent the spread of violent extremism.

“If you topple a stable ruler, throw a Middle Eastern country into chaos and hand it over to radical Islamic terrorists, that hurts America,” Cruz said.

Like I said…..in principle I agree with Cruz (will I go to Hell for saying that out loud?)……

As a combat veteran I can tell you that all avenues should be explored before you commit US troops……with all the macho rhetoric these days about the Middle East….I feel that the Us and the M-IC is forcing the country into a rush to war….not a place I want to see this country go…..again.

Sorry to bust any bubbles….but the decisions made to use US troops is looking more amateurish every day and with every decision….

Concentration of forces is the most basic law of military science. Victory on the battlefield is won by amassing as many troops as possible at the key point of attack, or ‘schwerpunkt,’ as it’s known in German. Unfortunately, the amateur strategists in the White House seem to have been studying social anthropology and women’s issues […]

Source: Think Before You Rush to War – The Unz Review

Any thoughts?  I am sure that some Right winger has lots to say….don’t be shy….it only hurts for a little while.