You still do not believe that there two justice systems in this country?

Terrill Thomas died in April 2016 after being denied water for seven days at Milwaukee County Jail.

And silly ass white boy gets moved so he can have organic food……Jacob Chansley stormed the U.S. Capitol and was moved to a Virginia jail so corrections officials can provide him with organic food.

A man who stormed the U.S. Capitol while sporting face paint, no shirt and a furry hat with horns was moved to a jail in Virginia on Thursday after a federal judge ordered authorities to provide him with organic food while he’s in custody.

Jacob Chansley was transferred to the Alexandria Detention Center after his attorney argued that his client had gone nine days without eating because organic food wasn’t served at the jail in Washington. A judge ordered corrections officials to provide the special diet.

Chansley lost 20 pounds since being transferred from Arizona to Washington last week, his attorney, Albert Watkins, told the judge. Chansley, who calls himself the “QAnon Shaman,” considers eating organic food to be part of his “shamanic belief system and way of life,” the lawyer said.

Two separate systems….and this is not a one off event….this happens all the time…..

The forthcoming posts are for all those that did not take in the doings in this trial…..or for those that had important things to do like watch the Kardashians…..

Yesterday the Senate trial of Donald Trump and his part in the insurrection of 06 January……but how will all this play out for the cameras and nation….

It’s impeachment, take II. The Senate on Tuesday begins the second impeachment trial of Donald Trump. Barring surprises, the smart money points to a short trial, maybe lasting a week, that results in Trump’s acquittal. Democrats (and a few Republicans) accuse Trump of inciting the Jan. 6 Capitol riot, but Trump’s lawyers say he didn’t encourage violence, was just exercising his First Amendment rights about the election results, and can’t be impeached anyway because he’s out of office. How things are expected to play out:

It all began with the Constitutionality of the trial…. 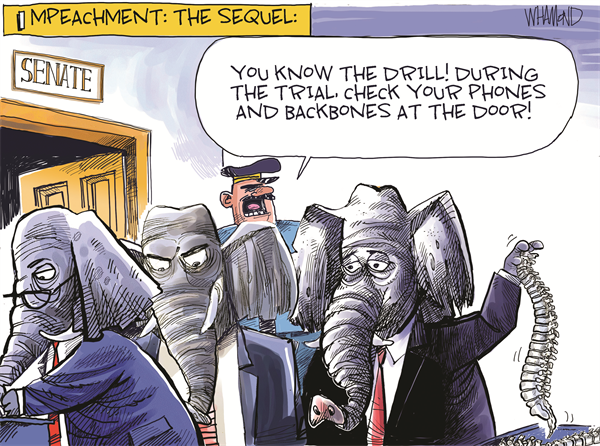 Trump’s lawyer rambled and babbled….contradicting himself over and over…..here are some of the big lines from day one……..

Trump’s lawyers argue that it is unconstitutional to put a former president on trial, while the House impeachment managers say there is no “January exception” that permits an outgoing president to commit offenses, the Guardian reports. Some big lines:

But the best line was on Twitter….”I could eat a bowl of alphabet soup and crap out  more coherent sentence than Trump’s lawyer”…well said and very observant.

After all the rhetoric the Senate had it’s vote…..

A day of debate on whether it is constitutional to put a former president on trial in the Senate succeeded in changing the mind of one senator. Donald Trump’s second impeachment trial was declared constitutional in a 56-44 vote, with six Republican senators voting with the chamber’s 50 Democrats. Last month, five Republicans voted against dismissing the trial. On Tuesday, GOP Sen. Bill Cassidy of Louisiana flipped and said he believes the trial is constitutional, the Hill reports. He was joined by Republican Sens. Susan Collins, Lisa Murkowski, Mitt Romney, Ben Sasse, and Pat Toomey, who voted the same way last month. “I have always said I was approaching this with an open mind,” Cassidy said, per the AP. He said the House impeachment managers delivered “strong arguments.”

I said before that Trump’s lawyers spoke and spoke and had very little to actually say…..even the ‘accused’ thought his lawyers were a joke…..

After the first day of Donald Trump’s second impeachment trial, his lawyers are getting bad reviews from Republicans—and the former president himself, according to Politico. Sources say Trump, who spent the day at Mar-a-Lago watching the Senate trial, was not impressed by the dry, technical arguments made by lead attorney Bruce Castor. The sources tell Politico that Trump was frustrated by the contrast between the contrast between his attorneys’ performance and the effective opening arguments made by House impeachment managers, who showed a graphic video of the Jan.6 Capitol riot. GOP Sen. John Cornyn also criticized Castor, saying he’s seen “a lot of lawyers and a lot of arguments,” and Castor’s “was not one of the finest,” the Washington Post reports.

Castor, who spoke for 48 minutes, “just rambled on and on and on and didn’t really address the constitutional argument,” Cornyn said, adding that second lawyer David Schoen did a better job. Sen. Ted Cruz, another Trump ally, said he didn’t the former president’s lawyers did “the most effective job,” while lead House impeachment manager Rep. Jamie Rankin was “impressive,” the AP reports. Sen. Bill Cassidy—one of six Republicans to vote with Democrats in favor of proceeding with the trial, and the only one to flip after the previous vote on its constitutionality—told reporters that Trump’s lawyers were “disorganized” and “random,” while House impeachment managers made a “compelling, cogent case.” When asked about the criticism from Republicans, Castor said, “We had a good day.

I understand why some think this is necessary….but the final tally is already set. 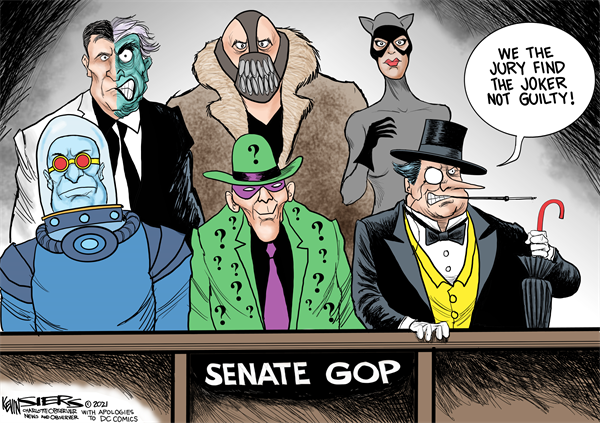 I apologize this draft has been hiding in my queue…..but it still has some validity.

Final that is unless there is some important breaking news….then I will write.

I let my thoughts be known after the attack on the Capitol with several posts….for those that would like to check those thoughts out……

After all the grief I took during my protest days in the 70s…..all the name calling such insults as ‘pinko’….I nor anyone with my group ever considered storming the Capitol and inflicting damage or harm to the staff and government offices.

I want the readers to ALWAYS remember the insurrection…..

Among the unique characteristics of American politics is our capacity to forget the unpleasant and inconvenient.

After a sitting president burgled his opponent’s headquarters and then tried to sack his entire Justice Department, his successor pardoned him in the service of “unity” and his party went on to thrive in the aftermath. Just over a decade later, there was an enormous scandal involving the secret sale of weapons to America’s top-profile international enemy to fund murderous paramilitaries on our own continent. The criminals involved were pardoned, the president involved feigned ignorance and then got the national capital’s airport named after him. Shortly thereafter, another Republican president lied the country into a costly and devastating war from which there remains no exit, then oversaw the worst natural disaster response in American history before catapulting the nation into the greatest economic calamity since the Great Depression. Within a decade, both parties seem to have forgotten that he even existed except to be seen as a respectable elder statesman at funerals and public functions.

Then came Donald Trump. Trump, his catastrophic failures and extraordinary malfeasance have not yet been forgotten because he still dominates the Republican Party. But his most horrific transgression is already receding into the background of the nation’s collective memory. So let’s all remind ourselves of what happened just this month.

Remember: There Was An Attempted Coup Against the U.S. Less Than a Month Ago

Was this a one off situation?  Or is there plans for my antics in the works?

The trial is in session….will this be the end of this situation?

I feel there is more to come….especially once Trump steps out of the shadows after the trial.

Please do not let apathy set in….this was more important to this republic than some (especially the GOP) want us to believe.

I want the people that committed this breach to suffer the way they made us protesters from the 70s suffer.