Now this is rich!

I seems that one of Trump’ sycophants has turned on him…..her name is Nikki Haley.

She has had an epiphany……

Nikki Haley refused to criticize Donald Trump for months while he claimed the election had been stolen, but her stance shifted dramatically after the Capitol riot, according to a lengthy Politico profile published Friday. On the day after the Jan. 6 attack, Haley, who served as UN ambassador in the Trump administration for two years, told a Republican National Committee meeting in Florida that Trump had gotten his words “badly wrong.” “And it wasn’t just his words,” she added. “His actions since Election Day will be judged harshly by history.” On Jan. 12, she told Politico chief political correspondent Tim Alberta that she was angered and disappointed by Trump’s treatment of Mike Pence after “the loyalty and friendship” the vice president had shown. “I’m disgusted by it,” she said.

“We need to acknowledge he let us down,” she said. “He went down a path he shouldn’t have, and we shouldn’t have followed him, and we shouldn’t have listened to him. And we can’t let that ever happen again.” Haley told Alberta that she was “deeply disturbed” by Trump’s behavior since losing the election. “Never did I think he would spiral out like this.” Haley, seen as a possible 2024 White House contender, said she considers impeachment a “waste of time,” but she doesn’t think Trump will run for office again. “I don’t think he’s going to be in the picture,” she said. “I don’t think he can. He’s fallen so far.” Alberta notes, however, that 13 days after the interview, Haley told Fox News that people should “give the man a break.” With a likely presidential campaign launch still two years away, Haley still has time to rekindle her “warm relationship” with Trump,” he writes.

After 4 years of carry water for Donald the Orange and she just now learned what he was all about? 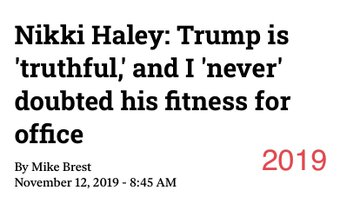 The reality is that she has eyes on a run for the presidency in 2024 and she is trying to save what little dignity she has left after being a toadie for Trump.

She is transparent….at least to anyone with an IQ about 50…..which does not include Haley.

That silly notion is just let the virus run its course and we will eventually become immune.

A moronic statement by our then president Donald Trump supported this silliness.

But what is this?

Herd immunity occurs when enough people become immune to a disease to make its spread unlikely. As a result, the entire community is protected, even those who are not themselves immune. Herd immunity is usually achieved through vaccination, but it can also occur through natural infection.

But will it, the Covid-19, become less harmful as it progresses?

This article may answer all your questions on this matter….it appeared on theconversation.com….

A recent modelling study painted a reassuring picture of a post-pandemic future in which SARS-CoV-2 transitions, over “a few years to a few decades”, from dangerous pathogen to just another common-cold coronavirus. This predicted loss of virulence, the authors stress, is based on a specific idiosyncrasy of the virus, namely that it rarely causes serious disease in children.

Still, many experts agreed that we should not be in the least surprised by the authors’ conclusion, as all viruses “become more transmissible and less pathogenic over time”. After all, the seductive logic goes, from an evolutionary perspective it makes no sense for a pathogen to harm the host on which it depends for its survival. According to this reasoning, virulence is little more than a temporary evolutionary imbalance.

This comfortable chain of reasoning was rudely broken by the announcement of “a realistic possibility” that the new highly transmissible B117 variant “is associated with an increased risk of death”.

Happy Mardi Gras….for those that celebrate……

For years now I have been telling my readers that the GOP was heading down a dangerous path….a path that could not bode well for the Party.

After 4 years of Trump the GOP is divided…..true conservatives and the Trumpites….so is the GOP over?

The GOP’s dire need for an alternative reality is well-founded. Demographics are changing. The number of people of color is increasing and whites will be in the minority in a bit over 20 years. Despite Hispanic Americans’ increased tilt towards Trump in 2020, unless Republican Party completely overhauls its platform and outreach efforts, most POC won’t vote for these politicians who stand in stark contrast to their interests.

Trump intuitively knew something that past Republicans didn’t get. Today’s conspiratorial and overtly white supremacist wings of the Republican Party, formerly disconnected from and disillusioned by the GOP, needed a proper welcoming in order to win elections. From Charlottesville’s “very fine people on both sides,” to the Proud Boys’ “stand back and stand by” comments, Trump signaled very clearly that these hate groups are embraced as part of the GOP.

The GOP Is Over

The GOP is losing donors by the barrel….one of their biggest donors…one of the largest is the Chamber of Commerce and they have cut ties with the GOP…others will follow….

The popularity of the Lincoln Project has given rise to the idea of conservatives forming a new party to counter the authoritarianism of the Trumpites.

Just how divided is the Republican Party? Divided enough that some 50 former Republican officials are on board to form a third US political party to serve as a counter to a GOP under the thumb of a wannabe autocrat, according to Reuters. The outlet cites “four people involved in the discussions,” said to involve former elected Republicans as well as officials who served in the past four Republican administrations. Evan McMullin, the former chief policy director for the House Republican Conference who ran as an independent in the 2016 presidential election, tells Reuters that more than 120 people—including former Rep. Charlie Dent—participated Friday in a Zoom discussion about a center-right party that would focus on adherence to the Constitution and rule of law. McMullin notes that about 40% of those on the call supported the idea.

“Large portions of the Republican Party are radicalizing and threatening American democracy,” McMullin says, noting call participants were shocked that so many Republicans in Congress voted to block certification of Joe Biden’s election victory. An “extremist” wing led by former President Trump “has taken the [GOP] over,” McMullin tells the Washington Post, adding that some officials believe the party is “irredeemable.” Asked to respond, Trump spokesman Jason Miller tells Reuters that those involved in the talks are “losers [who] left the Republican Party when they voted for Joe Biden.” The Republican National Committee has a very different take, however, pointing to a recent statement from Chairwoman Ronna McDaniel. She noted infighting would distract from the 2022 elections, and that winning is only possible “if we come together.”

I like the idea….maybe now the voter can have a real choice….but then that may be just my wishful thinking.

Apparently most Americans would like to see a third party as well…..

“I didn’t leave the Democratic Party. The party left me,” Ronald Reagan famously said after becoming a Republican in 1962. According to a new Gallup poll, a record number of Republicans now feel their party has left them. The poll found that 62% of Americans feel the two main parties “do such a poor job representing the American people that a third party is needed.” That’s the highest proportion since Gallup starting asking the question in 2003, and it now includes a majority of Republicans. Some 63% of Republicans now believe a third party is needed, up from 40% in September last year. Among independents, support for a third party was at 70%, while 46% of Democrats would like to see a third major political party, down from 52% in September. The poll also found that a record 50% of Americans now identify as independents.

ut while most Republicans now desire a third party, it would take more than one extra party to encompass their views. Some 40% of Republicans and Republican-leaning independents said the party should become more conservative, while 24% wanted it to become more moderate and 36% felt it should stay the same. Some 68% of Republicans wanted Donald Trump to remain as party leader, compared to just 47% of GOP-leaning independents. Among Democrats and Democrat-leaning independents, 34% wanted the party to become more liberal, 34% felt it should become more moderate, and 31% wanted it to stay the same. No third-party candidate has carried a state in a presidential election since segregationist George Wallace won five Southern states in 1968, though Ross Perot took 18.9% of the vote nationwide in 1992.

Any thoughts on the GOP?

Any thoughts on a new party?

I would like to leave behind now the moronic action of 06 January and return to the scrutiny of Biden’s Cabinet picks.

He has made his choice to lead the spy agency, the CIA…..

President-elect Joe Biden announced Monday he has chosen veteran diplomat William Burns to be his CIA director. A former ambassador to Russia and Jordan, Burns, 64, had a 33-year career at the State Department under both Republican and Democratic presidents. He rose through the ranks of the diplomatic corps to become deputy secretary of state before retiring in 2014 to run the Carnegie Endowment of International Peace. Amid tumult in the State Department after President Trump took office in 2017, Burns held his tongue until last year when he began writing highly critical pieces of the Trump administration’s policies in Foreign Affairs and other publications, reports the AP. Burns has been a staunch advocate of rebuilding and restructuring the foreign service, positions Biden has aligned himself with.

In an opinion piece on the pick for the Washington Post, David Ignatius frames the choice: “What’s likely to have appealed to Biden … is [Burns’] reputation as a nonpartisan figure who served in hard places—Russia and the Middle East—and over the years developed close relationships with the countries that are the CIA’s key liaison partners. His biggest challenge will be dealing with a quirky, cliquey CIA culture that is often resistant to change. CIA operatives have been masterful over the years at bending new directors to their priorities.” And from Biden himself: “Bill Burns is an exemplary diplomat with decades of experience on the world stage keeping our people and our country safe and secure. The American people will sleep soundly with him as our next CIA director.”

There you have the fluff piece on the new nominee….a person I am not convinced is the best choice to run the agency…..because he will eventually be consumed by the culture.

But, if past is precedent, the highest hydras who head calcified fiefdoms at CIA can be expected to resist any real control from the top. They are more likely to try to co-opt top management or make end runs around it. This is not new.

Most senior CIA operations officers, in particular, have never been comfortable with meaningful supervision, lest it lead to reining them in or impinging on their ample budgets. With secrecy always in play (including strict application of the “need-to-know” principle), Burns will need a good deputy – preferably a strong outsider – to avoid being blind-sided – or diddled.

Burns lacks proven experience managing organizations as large and variegated as the agency, so the jury is out on whether he will be able to do it.

Can William Burns Change the CIA?