First of all what is a presidential library?

Presidential Libraries are archives and museums, bringing together the documents and artifacts of a President and his administration and presenting them to the public for study and discussion without regard for political considerations or affiliations. Presidential Libraries and Museums, like their holdings, belong to the American people.

Many Presidential papers and records had been lost, destroyed, sold for profit, or ruined by poor storage conditions. In 1939, President Franklin D. Roosevelt sought a better alternative.

In short it is a storage vessel for all the presidential papers and awards and such…..and full owned by the people of the US through the National Archives.

Now that you know what these are the next question will be will Trump build a library?

Since most of his “actions” were Executive Orders so that he could pull an end run on Congress….maybe he will just paper a wall or two with the orders….since he signed few actual laws passed by Congress the library will be a very small place like the man that held the office of president in the last four years.

Then most of his policies were in Tweets then another room with his Tweets reproduced on a wall….

These places are for research and education….so what will be in a Trump library?

Since presidents worry about their legacy…..the library becomes one way to influence and control that legacy.

Presidential libraries are perfect examples of just how far presidents will go to control their own legacies. Since the first one was created in 1941, what were intended to be serious research centers have grown into flashy, partisan temples touting huckster history. Built with undisclosed, unlimited donations, often to sitting presidents, libraries have traditionally been donated to the government after their construction. But even though they are taxpayer-funded and controlled by a federal agency, the private foundations established by former presidents to build the libraries retain outsize influence. The libraries’ whitewashed exhibits are created by presidential boosters; they host political events; their boards are stacked with loyalists; and many of their important historical records may never see the light of day.

The federal government spends about $100 million a year operating, maintaining and improving presidential libraries. But the costs to build and equip them—which have doubled for each successive president in the past 30 years and now run in excess of $500 million—must come from non-federal sources. That’s not a sum one can raise through $25 internet donations; presidential libraries are funded by mega-donors.

Trump does have mega-donors…..but will they come to the rescue of a Trump Library?

Sadly I cannot think of much that will go into a library to preserve Trump’s legacy….if it helps whitewash his legacy then the library would be one or two rooms at most…..or a broom closet with a laptop on a small table.

There has an opinion piece that basically states that there will be NO Trump presidential library….

Every president since FDR has had a presidential library, and Barack Obama is currently working on his version of one to continue the tradition. What about Donald Trump? The Washington Post reported earlier this month that Trump likes the idea of raising $2 billion from his grass-roots supporters and opening one in Florida. But in a lengthy piece at Politico, Anthony Clark—author of a book on presidential libraries—assesses the chances and concludes that a Trump library probably won’t happen. No, it’s not because Trump famously doesn’t spend time reading books—”presidential libraries aren’t that kind of library,” notes Clark—or because of the Jan. 6 Capitol riot. It’s because the process is way more expensive and complicated than you might think, and the particulars don’t seem well suited to Trump.

“If he does build a library, it’s likely Trump would want the legitimacy and imprimatur of the federal government, as a ‘seal of approval’ for his story, told his way,” writes Clark. For that to happen, Trump would have to raise the money, buy the land, have it built, raise hundreds of millions more for maintenance—”and give it, almost unthinkably, to the government.” Trump also could opt to go his own way, outside the National Archives system, as Obama is attempting to do. But the upkeep gets expensive in perpetuity, as the Richard Nixon library (which started independent, then joined the rest) found out. Clark floats the idea that Trump might take a more “Trumpian” route: He could license his name to “a for-profit enterprise—maybe a casino, or a golf course, or a ticketed museum with an attached hotel—to operate as a tourist attraction for the MAGAs and the (morbidly) curious.” (Read the full story

What do you think would be included in a Trump Library?

First have you noticed that the GOPers that are most in Trump’s circle came in with the Tea Party in 2010?

One last post on day 2 of the Trump impeachment trial……

The Dems offered up some very compelling and scary videos of the breaching of the Capitol…any true American watching them should be terrified the Trump brought us to this point in our history…..but not the d/bags in the Senate….most not all….they see nothing that makes them take notice…

After a second day of searing evidence in former President Trump’s second impeachment trial—including previously unseen video footage showing how narrowly some lawmakers escaped the mob—most Republican lawmakers still seemed unwilling to vote to convict. GOP senators including Ted Cruz said that while the scenes of violence were horrific, it hadn’t changed their minds on whether Trump is guilty of inciting the insurrection. To convict the former president, at least 17 Republicans will have to vote with the chamber’s 50 Democrats. “I think you get at best six Republicans—probably five and maybe six,” Sen. Tim Scott told CNN. More:

AS I said gutless dickheads.

The impeachment trial of Donald Trump is a sham…..a sham because most Senators have made up their minds and no amount of evidence will change that.

The outcome of acquittal is not in question.

Speaking of questions….there are some around the insurrection that need to be asked….

There are a number of obvious questions that relate to the operation of the conspiracy that must be answered, including:

But there are more fundamental questions that no one is asking, let alone answering. First and foremost: If the coup succeeded, what was the plan?

Who, moreover, was providing the financial backing? As is well known, in order to uncover the roots of a criminal conspiracy, it is necessary to “follow the money.” Trump’s own cabinet was stocked with billionaires, including individuals like his former education secretary, Betsy DeVos, the sister of Blackwater founder Erik Prince. The DeVos family is known to have provided funding for right-wing demonstrations in Michigan to demand an end to restrictions on the spread of the coronavirus pandemic. What is the connection between the fascistic mob on January 6 and high-level support within the ruling class?

Since very of this will be brought up….the conclusion of the trial is a forgone conclusion.

Was this trial necessary or just political theater?

On the second day of Trump’s day in the Senate….the Dem managers were a 1000 times better and more articulate than the two baboons that Trump had pleading his case on Tuesday.

That babbling idiot that was pleading now says that his inept handling of the opening argument was on purpose….

“That was by design,” Castor said. “I don’t like reading bad stuff about me in the newspaper any more than anyone else does, or my legal colleagues around the country saying I’m stupid, but the reason I made the change was precisely so that in lowering the temperature in the room, the public coverage would be more about what I said than about what the House Managers said.”

This whole trial thing just proves one thing….it is as always party over country…. 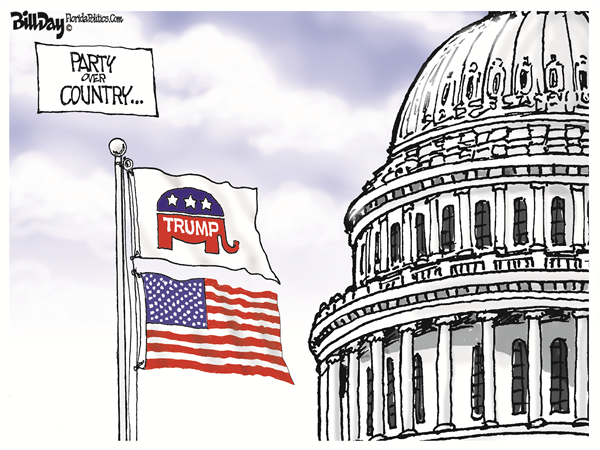 I say this because evidence means nothing….and the minds of the GOP are already decided the outcome…it is not a trial it is theater of the absurd.

“We are having a trial on the facts.” More:

The evidence was compelling…..well compelling to anyone with an open mind…..that omits the Senate GOP for the most part.

Day Three will be more evidence.