Part of the evidence that the Dems are presenting to make a case for an impeachment….part of that evidence is that Trump incited the mob to commit these breaches…..an accusation that Trump denies.

As the trial of Trump proceeds some of the participants in the breach of the Capitol have now seen the light and the errors of their actions….or so they claim….

They broke through barricades, shattered windows and seized control of the U.S. Capitol, some making death threats against members of Congress hiding inside, others brutalizing the police officers who stood in their way.

As the cases against nearly 200 of the Capitol rioters begin to wind through federal court, many of the defendants blame the commander in chief they followed for the violence that left five dead during the insurrection Jan. 6.

In court documents, media interviews and through official attorney statements, staunch supporters of former President Donald Trump who carried out the attempted coup argue they were merely doing what they thought the nation’s leader had asked, some citing a cult-like loyalty.

Stupidity does not excuse the action.

The trial continues and the result is all but written in stone…..he will be acquitted because the GOP does not have the courage to act in the best interest of the country.

As the Senate Trial of Trump is entering the final stage……Americans hold their breath waiting for the outcome…but they are not alone…..

He being Donald the Orange.

He is waiting to consolidate is iron grip on the GOP….and then he can doll out retribution on all those that he perceives as disloyal.

Only logical because he did so as president to those people that within the GOP that did not give him the support he thought he deserved.

He will step out of the shadows after te trial and return to his former self.

Now, heading into what could have been an historic bipartisan rebuke, the former president and his team are confident both of his acquittal and that he’ll come out of the trial with his influence over the Republican party all but cemented.

“He’s Teflon, right. It’s been a month since the Capitol riot and I would say, for the most part, the GOP has coalesced back behind him,” said a former Trump campaign official.

Already, Trump aides contend, the impeachment process has proved beneficial to the ex-president — exposing disloyalty within the party’s ranks and igniting grassroots backlash against Republicans who have attempted to nudge the GOP base away from Trump. Nebraska Sen. Ben Sasse spent last week fending off constituent criticisms and censures from state party officials after he compared Trumpism to “a civic cancer for the nation.” And Trump’s allies believe the ex-president’s impending impeachment trial will further illuminate who the turncoats are.

“It’s going to help expose more bad apples that he can primary if any senators vote to convict,” added the former campaign official.

We all know that the day of reckoning is approach and soon he will exact his retribution on those that wronged him.

Will his antics finally drive that last nail inn the coffin of the GOP?

Some say yes….but I say NO way…..this is the GOP of today and the amount of supporters show their popularity with the people.

Be prepared for more Trumpian antics……he will NOT be silenced. 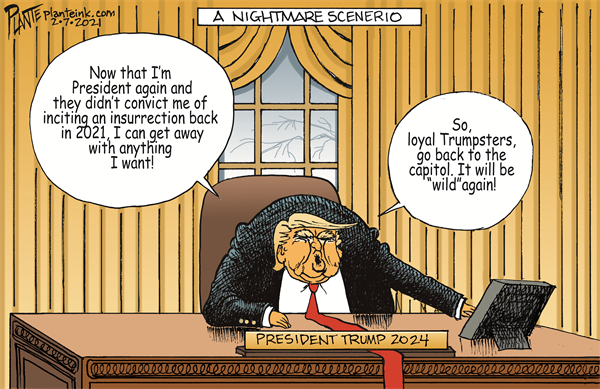 More evidence presentation by the House……

Once again the House managers presented a compelling case….compelling to anyone with a spine and half a mind……

The House impeachment managers wrapped up their case against former President Trump on Thursday, arguing that rioters who descended on the Capitol did so because they were obeying the president. One repeated sentiment from the day is expressed in this quote from Rep. Joe Neguse: “We humbly, humbly ask you to convict President Trump for the crime for which he is overwhelmingly guilty of. Because if you don’t, if we pretend this didn’t happen, or worse, if we let it go unanswered, who’s to say it won’t happen again?” Trump’s defense team will begin its defense on Friday. Some highlights from Thursday:

That wrapped up the House case…..now it will move on to the defense team…..

But before they present their case the Trump lawyers met with some senators in private before they begin (think about that for a moment)…..

Dismissing the appearance of conflict—and again demonstrating that an impeachment trial is unlike any other—President Trump’s lawyers met with three of his jurors Thursday afternoon to plan strategy. The meeting was “just very nice,” said David Schoen, one of the lawyers, the Washington Post reports. Trump supporters and Republican Sens. Lindsey Graham, Mike Lee, and Ted Cruz huddled in a room in the Capitol with the lawyers after the trial adjourned for the day. Calling the senators “friendly guys,” Schoen said the group was “talking about procedure.” Republicans have been critical of the Trump lawyers’ performance so far. Schoen said the senators didn’t tell him what questions they’ll ask during the trial. The discussion was about “just how this format goes, you know, the question-and-answer period, all that,” he said.

On the other hand, Cruz said after the meeting that they were “discussing their legal strategy and sharing our thoughts.” Few senators of either party appear to be undecided, but when they’re sworn in as jurors, they vow to administer “impartial justice” in the case. The three senators were following the example of their leader, Sen. Mitch McConnell, who had promised Senate Republicans’ “total cooperation” with the defense team during Trump’s first impeachment trial. Schoen said the meeting Thursday was appropriate, per CNN. “I think it’s the best practice here in impeachment,” he said, suggesting the bar is low. “There’s nothing about this thing that has any semblance of due process whatsoever.” Cruz said: “I think the end result of this impeachment trial is crystal clear to everybody. Donald Trump will be acquitted.”

This is a perfect example of just what a sham this trial is turning into…..when do jurors tutor the lawyers?

Minds are made up….evidence means nothing to these spineless slugs.

Friday will be the day that we get to see just what the defense has to say…..the first amendment will be front and center.  (We can talk about that later)

Watch This This Blog!