Midterm elections are just 7 days away….everyone that can should go out and VOTE!

Just want to make one thought be known…..what about those solid Republican states? 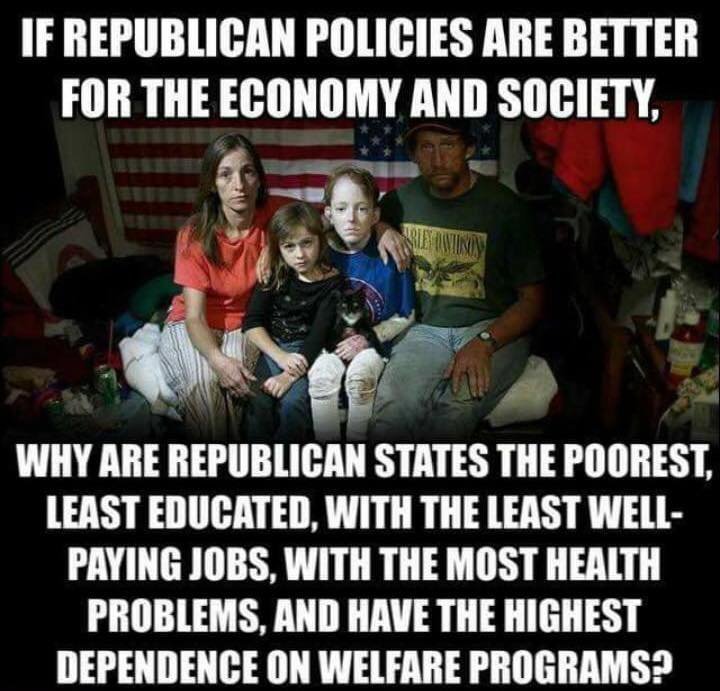 You have heard the silliness I am sure.  The mass of people walking their way to the border with the US is somehow a threat to our national security……first what moronic bullshit!

The Defense Department says it’s sending 5,200 active duty troops to “harden” the southern border against a migrant caravan making its way through Mexico, the AP reports. Gen. Terrence O’Shaughnessy tells reporters that 800 soldiers were en route on Monday and that the remainder of the troops would be at the southwest border by the end of the week. That’s in addition to the more than 2,000 members of the National Guard already providing assistance at the border now. Officials say the troops will provide “mission enhancing capabilities” and will be armed. The announcement comes as President Trump has been trying to focus on the caravan just a week before the midterm elections.

O’Shaughnessy says the military will cooperate with US Customs and Border Patrol as it first strengthens the border in Texas, then Arizona and California, the Washington Post reports. Among the deployed are US Army Corps of Engineers members, three combat engineer battalions, helicopters with night-vision capabilities to tell the CBP where help is needed, military police units, and cargo aircraft including a C-17 and three C-130s. The Pentagon has already sent down 22 miles of concertina wire and plans to send enough to cover 150 miles. The operation is called Operation Faithful. “Border security is national security,” O’Shaughnessy said Monday, per USA Today.

First why the need for troops?  We already have 2000+ on the border.  What happens if they make it to the border…..are the troops willing to shot and kill unarmed civilians?

Of course if you ask a supporter there are diseased ridden people in the midst and/or gang members with all their weapons and drugs and stuff.

This is all so fucking silly!

Then we need to have a debate on immigration…..that is about as worthless an endeavor as climate change or guns….Americans are NOT capable of having a discourse on these subjects because critical thinking has bee replaced  with personality worship and slogans and most important…HATRED!

Then there are all those “really bad people” that are in this caravan, according to Our Dear Supreme Leader, Trump….there are these bad people but they are not in the “caravan” these people are Trump and the spineless enablers….THESE ARE HOLLOW PATHETIC LITTLE PEOPLE!

I continue my posting the series on the History of the US written by a military historian……Below is the fifth installment of the “American History for Truthdiggers” series, a pull-no-punches appraisal of our shared, if flawed, past. The author of the series, Danny Sjursen, an active-duty major in the U.S. Army, served military tours in Iraq and Afghanistan and taught the nation’s checkered, often inspiring past when he was an assistant professor of history at West Point. His wartime experiences, his scholarship, his skill as a writer and his patriotism illuminate these Truthdig posts.

Part 5 of “American History for Truthdiggers.”

“The war [of independence] was not just about home rule, but about who would rule at home.”
—Historian Carl Becker

What sort of revolution was it? Radical or conservative? Military or social? Earnestly democratic or hypocritical farce?

Perhaps a bit of them all. What it most certainly was not was what is presented in the comfortable, patriotic, grade-school yarn to which we’ve all grown accustomed. Yet, neither was it something out of a fable of white privilege that can be dismissed outright.

I did a bunch of research on the colonies during the early years especially 1770-1799….this Series Part is about some of those years and is an interesting read…hope you guys agree…..

We are celebrating the 100 years since the beginning of World War One….and October was a busy month during this horrendous conflict…..

October during World War I, which ended 100 years ago, was, to use a technical term in the history profession, crazy. Here are 10 reasons why:

I try to keep Americans interested in learning about a war that should never be forgotten….if only the war dead could talk….maybe war would not be attractive to some leaders….if only…..

As we slowly remove ourselves from the international treaties of our past….and the newest one is the INF Treaty…..a nuke and missile treaty from the 1980s….

Personally I think it is stupid to pull out yet another nuke treaty……but do not take my word for  it…..

President Donald Trump’s announcement that he intends to withdraw from the Intermediate-Range Nuclear Forces (INF) Treaty was cast in contractual logic: the U.S.-Russian agreement prohibits land-based short-and-intermediate-range ballistic and cruise missiles, both nuclear and conventional, which are difficult to track and make unintentional nuclear war more likely. Washington, with support from the North Atlantic Treaty Organization, alleges that Moscow has breached that ban, and, as Trump put it , “we’re not going to let them violate a nuclear agreement and go out and do weapons and we’re not allowed to.”

If Russia has violated the deal, why should America maintain it? While there is a good reason to think National Security Advisor John Bolton would want out of the INF Treaty regardless of Russian compliance—he has argued as much in the past—the basic logic of leaving an already broken treaty seems straightforward. Nevertheless, there are three strategic reasons to proceed with extreme caution.

His, Trump’s, withdrawal should not be the end of arms control as we know it…..

Even before President Trump reversed his position and announced (at a campaign rally for Republican congressional candidates in Nevada, no less) that he was pulling the United States from the Intermediate-Range Nuclear Forces Agreement (INF), the era of significant nuclear arms control agreements between the United States and Russia was in danger of ending. Such a development must be forestalled at all costs, because arms control efforts have over the last 50 years shown themselves to be remarkably effective.

From the 1963 Limited Test Ban Treaty, which banned nuclear testing in the atmosphere, to the 2011 New START Agreement, which limited the two countries to no more than 1,550 deployed nuclear weapons on no more than 700 deployed delivery vehicles, the two major nuclear powers have concluded dozens of bilateral agreements and supported several multilateral arms pacts.

Hopefully Trump  will come to his senses about nukes and arms control…..but truthfully I am not holding my breath….are you?

Saudi Arabia’s top diplomat said Saturday that the global outcry and media focus on the killing of a Saudi journalist earlier this month has become “hysterical” as he urged the public to wait for the results of an investigation before ascribing blame to the kingdom’s top leadership, the AP reports. Jamal Khashoggi, a Washington Post columnist critical of Saudi Arabia’s Crown Prince Mohammed bin Salman, was killed by Saudi agents at the kingdom’s consulate in Istanbul on Oct. 2. “This issue has become fairly hysterical,” Foreign Minister Adel al-Jubeir said. “I think people have assigned blame to Saudi Arabia with such certainty before the investigation is complete.” Some of those implicated in Khashoggi’s killing are close to Prince Mohammed, who is the kingdom’s heir apparent.

His condemnation of the killing as “heinous” and “painful” has so far failed to ease suspicions that such a high-level operation could have been carried out without his knowledge. Al-Jubeir addressed the mounting skepticism around the crown prince’s alleged involvement. He was speaking in response to questions from Western journalists at an annual conference of international officials, including US Defense Secretary James Mattis, in Bahrain. “We have made clear that we are going to have a full and transparent investigation, the results of which will be released,” he said, adding that the kingdom has also put in place mechanisms to ensure this does not happen again. “We know that people exceeded their authority and we know that we’re investigating them,” he said

They tried to get a chuckle and to make light of the assassination.

To counter their barbarity they use Iran as an example……

Saudi Arabia and key ally Bahrain said on Saturday that Gulf states are playing a critical role in maintaining stability in the Middle East by combating Iran’s “vision of darkness”, as Riyadh faces its worst political crisis in decades, reports Reuters.

Saudi Arabia is the lynchpin of a US-backed regional bloc against growing Iranian influence in the Middle East but the murder of journalist Jamal Khashoggi at its consulate in Istanbul on Oct. 2. has prompted a global outcry and strained Riyadh’s ties with the West.

“We are now dealing with two visions in the Middle East. One is a (Saudi) vision of light … One is an (Iranian) vision of darkness which seeks to spread sectarianism throughout the region,” Foreign Minister Adel al-Jubeir told a security summit in Bahrain.

What CRAP!  Who wrote this script for them….. Israel?

The Saudis are pulling out all stops to make the US forget their crimes against their people and against humanity.

Any American investing in anything Saudi should do the right thing and pull their cash from under their, The Saudis, feet.