For a couple of years I have been drawing attention to the stupid at the Pentagon when they wanted to replace the close combat support plane, A-10 Warthog, with a gold plated brick, the F-35……a plane that has had nothing but problems….and the list of problems is extensive…..here read the problems for yourself……

The F-35, which comes with an estimated $1.5 trillion pricetag over the life of the program, has faced numerous hurdles and delays. Most recently, there have been concerns over its computer systems’ vulnerability, and Chinese hackers have possibly stolen classified data related to the project.

The F-35’s construction has continued, and it is being manufactured across multiple states and different countries. For better or worse, it’s going to be the US and its allies’ main warplane for decades to come.

Source: Pentagon: Here are all the problems with the F-35 – Business Insider

But guess what?  The Air Force is not the only service that has a piece of crap for equipment……the Navy is having similar problems with their newest warship…..

When a branch of the US military starts rolling out a new pet project, it is rarely either cost effective or literally effective. The US Navy’s littoral combat ship (LCS) program is really underscoring that recently, with more ships breaking at seemingly random, meaning four nearly brand new ships have broken down in less than a year.

Just yesterday, the Navy discussed problems with its first LCS, the USS Freedom, which inexplicably was put out of commission back in July when seawater got into the engine and the oil system and started rusting things out. Limping back to home port, the USS Freedom now needs an engine replaced outright, with no timetable for the fix, or the cost.

Today, officials reported the USS Coronado, which only got commissioned back in 2014, has suffered an unspecified “engine casualty” and is struggling back to Pearl Harbor for repairs. It had just left Pearl Harbor on Friday.

That makes four LCS ships that have broken down in the past year, which is a pretty disastrous track record considering that even the oldest ship, the USS Freedom, was commissioned in late 2008, and the US only had a total of six active duty LCS ships in total.

The LCS is a product of the US Navy’s efforts, in the wake of the Cold War, to shift its priorities away from having more large capital ships than the Soviet Union toward just having a lot of stuff that floats about in the water, so they could have a nominal presence more or less anywhere.

The idea was that the LCS would be a low-cost, reliable ship for limited missions around coastlines, but the reality is that upkeep on the ships has been dramatically higher than initial estimates, and an LCS ends up costing more than a larger, and more combat-ready ship like a frigate.

Still, with several billion dollars sunk into the plan and the Navy’s priorities still squarely on quantity over quality, the LCS fleet is being constructed in earnest, even as the few already completed stumble back into the docks, because they didn’t do so great on the reliability front either.

The more we try to improve our equipment for our troops the more we screw up everything……what could possibly be the reason?

Defense contracts……it is about the bucks not the quality of the equipment….

It is only a matter of weeks before we have our first debate between the Mouth and The Warmonger….but to be fair there should be two other candidates in this debate…Gary Johnson and Dr, Jill Stein……

If a candidate is on the state’s ballot then they should be part of the process…..polling should have nothing to do with the debates…..

After the Republicans and Democrats finished their conventions in late July, the Green Party gathered this month to nominate Dr. Jill Stein for the presidency.

fter the Republicans and Democrats finished their conventions in late July, the Green Party gathered this month to nominate Dr. Jill Stein for the presidency. Stein’s campaign—with her party on ballot lines in the majority of states, and her poll numbers surging ahead of Green numbers from recent presidential elections—has the potential to be a breakthrough bid for the Greens, and for a more robust democracy.

Stein recognized the prospect in an optimistic yet urgent acceptance speech in which she spoke of “unstoppable momentum for transformational change.” The candidate who talks of ushering in a “Green New Deal” told the Green Party Convention that the party has “an historic opportunity, an historic responsibility to be the agents of that change. As Martin Luther King said, ‘the arc of the moral universe is long, but it bends towards justice.’ I know that arc is bending in us, and through us. And we are actors in something much bigger than us as we struggle for justice, for peace, for community, for healing.”

Source: Jill Stein Should Be Part of a 4-Way Presidential Debate | The Nation

This would be fair and balanced….but we all know that the political process has nothing to do with “fair and balanced”……and the media will not do the right thing….they want to be the “king maker”…..so qualified candidates will not be part of the debates..

Everyone these days see the problems with this system and yet they do NOTHING to see it changed……debates with all qualified candidates would go a long way to help change occur…..

Stein and Johnson have earned the right to be part of this process…..

Since the American voter is too lazy to look for alternatives we will probably get another Clinton as president….and because of that we will have a country and a foreign policy run by the M-IC.

What does that mean?

More war and more interventionism across the globe…..because the M-IC loves them some Hillary….

Military contractors are overwhelmingly favoring Hillary Clinton for president with their political contributions this year. Though Republicans normally enjoy a slight fundraising advantage here, she currently leads Donald Trump 5-to-1 among donations from employees of the top 25 firms in this extremely lucrative, highly government dependent industry.

An article in Politico last week tried to put a good face on this for Clinton. One consultant called Trump a “totally unknown quantity” and “scary.” Unnamed “defense watchers” say that Clinton “offers what weapons makers crave most: predictability.”

Source: Why the Military-Industrial Complex Loves Hillary | The American Spectator 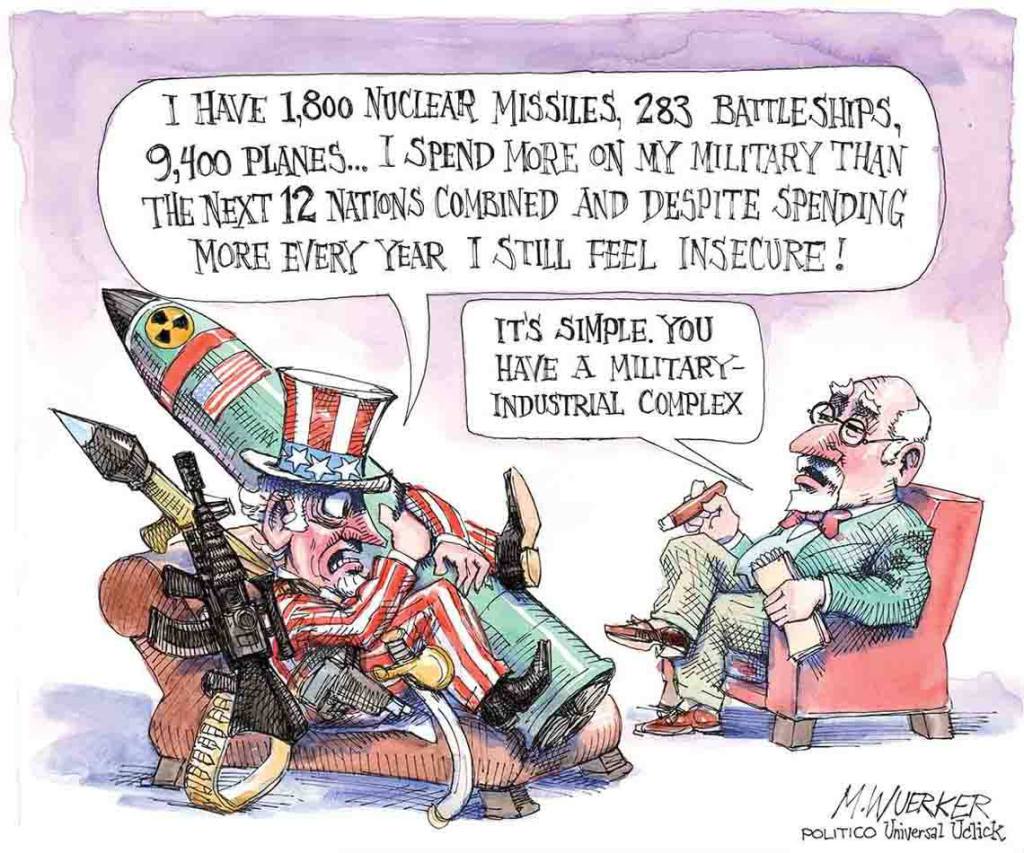 President Barack Obama announced last month that he plans to further delay the withdrawal of U.S. troops from Afghanistan, leaving at least 8,400 forces in the country after January instead of honoring his most recent pledge to cut numbers to 5,500.

Now, a new report compiled by the Congressional Research Service, which produces reports for members of Congress, reveals that the number of U.S. service members in Afghanistan is dwarfed by the nearly 29,000 Department of Defense private contractors in the country, outnumbering American troops three to one.

We have at least 4 more years to look forward to more interventionism, confrontation and war…

You voted for it….you got it!

This is an op-ed that I wrote for my friends over at Ace News Room……the world is focused on the destruction of the barbaric d/bags of ISIS and while they are distracted China is making several moves that could prove to be problematic for the US and its allies…..

I believe that the foreign policies of the candidates is the most important issue in this election…..and yet there is NO interests on grasping the complexities of the field…..while the …

Ace News is a great source for news…please stop by if you want to get news that may have been missed by your local MSM…..you will not regret it.

Yes I know…I am a history nerd and I am proud of it.

One of my favorite people from around the Civil War time was the abolitionist Frederick Douglass…..I recent did a press of an article in slavery and capitalism and I saw another related article in Reason ….I thought I would pass it along….

Understanding the political philosophy of the abolitionist leader.

In November 1848 a socialist activist gave a speech at the 13th annual meeting of the Rhode Island Anti-Slavery Society. “Mr. Ingliss” began his remarks well enough, reported the abolitionist leader Frederick Douglass, who was present to give a speech of his own that day, “but strangely enough went on in an effort to show that wages slavery is as bad as chattel slavery.”

Douglass soon became infuriated with the socialist speaker. “The attempts to place holding property in the soil—on the same footing as holding property in man, was most lame and impotent,” Douglass declared. “And the wonder is that anyone could listen with patience to such arrant nonsense.”

Frederick Douglass heard a lot of arrant nonsense from American socialists in those days. That’s because most socialists thought the anti-slavery movement had its priorities all wrong. As the left-wing historian Carl Guarneri once put it, most antebellum socialists “were hostile or at least indifferent to the abolitionist appeal because they believed that it diverted attention from the serious problems facing northern workers with the onset of industrial capitalism.” The true path to social reform, the socialists said, was the path of anti-capitalism.

Source: Frederick Douglass on Capitalism, Slavery, and the ‘Arrant Nonsense’ of Socialism – Reason.com

Douglass is a fascinating individual that does not get the attention he should in our educational system….read an learn about a true American hero….a hero that some would just as soon forget…..but that will not happen as long as I breath….period.

You may thank me later…..