Back in April of 2016 I wrote about the most stupid piece of unthinking bullshit I have ever read…..The Mormons decided to air drop religious material on Syria looking for converts….(read it for yourself)……

I close my day of posting with a situation from last week…..it illustrates the depths of ignorance…….it falls firmly in the category of “Can’t Fix Stupid!”

Most of us humans are always looking for a sign that God is listening and helping…..religions have sent missionaries all over the world to indoctrinate….ooops…… Sorry that should be teach the word of God to others…..but recently I saw a piece that tells of a massive airdrop of Bibles over a war torn country……and just how pathetic this attempt was…..

People were killed and/or injury by flying Bibles….Bibles that could not be read….how’s that for humanitarian aid?

You may be asking why would I rehash this story, right?

The religious idiots are not finished with Syria yet…….

What people living in ISIS-controlled areas really need is Christianity delivered by drone, an evangelical church in Sweden has decided. The Uppsala-based Word of Life church says it plans to use military drones to drop thousands of Bibles over parts of Syria in the hope of converting Muslims, CNET reports. “Let’s pray the message of God’s love in Christ will conquer that of darkness and hate,” the church said in an Instagram post. The church plans to drop Arabic-language electronic Bibles, which will not need to be plugged in to work.

The church’s missions director says the plan “is not connected to any military or aggressive action in any way,” but has a lot in common with traditional smuggling of Bibles into places like the Soviet Union, the Washington Post reports. On its Facebook page, the church says the Bible drop is happening in parallel with the church’s other work in the region, including providing medical care in refugee camps. It hasn’t responded to a post from somebody worried that ISIS will harshly punish anybody caught with a Bible—and that extremists will now target the church’s headquarters in Sweden.

The only thing I can say positive about this is at least these religious dolts had the good sense to print the material in Arabic….something Morons kinda overlooked in their attempt in April.

Why cannot these religious types do God’s work and stop wasting cash try to convert and try helping the refugees that the whole world has abandoned?

This is why I have little time for these religious types…..

There are many sources in this post….but they are needed to help explain the possibilities….

Russia has proclaimed a daily 3 hour ceasefire in Aleppo to allow aid to enter the city…..we will see how this works out.

The news seems to point to the “rebels” (whoever they are) as breaking the hold of ISIS and others on Aleppo……if true then the conflict could be entering into a critical point very soon……and I found a site that breaks down the conflict on many levels…..

Syrian opposition forces assembled an army of rebel fighters from different fronts and launched an offensive they call the “Great Battle of Aleppo.”

It appears at least for now that Aleppo could very well be the breaking point and possibly move the conflict toward an end game (we shall see)…..

The battle for Aleppo has forced the al Qaeda groups into their desperate last stand, as the Washington-driven proxy war on Syria moves into its final stages. The liberation of Aleppo will be the beginning of the end.

The online maps have been misleading. Even before the Russian air power intervention of September 2015 the Syrian Government controlled 85% of the country’s populated areas. But reclaiming all of Aleppo is critical for Syrian control of the north and of supply lines to the shrinking ground of ISIS in the east.

Syria’s major problem has been Turkey’s semi-open support for jihadist armies crossing the 800km northern frontier, and the Turkey-Saudi-Qatari backed advances of ISIS from the east. In the past 10 months the Syrian Alliance has successfully pushed back on both fronts. Further, since last month, Turkey is in disarray, with its own problems.

Aleppo is entering a critical phase. The forces of the trilateral alliance of Assad, Hezbollah, and Iranian militias, supported by Russian air power, have cut off supply lines to opposition groups in the old city, encircled its eastern part, and are trying, in vain at the time of writing, to break through the opposition lines.

These are bloody days in the old city, and the military offensive against Aleppo has not spared hospitals, civilians, fleeing women and children, bakeries, and anything that moves. Between 300 and 400 thousand civilians are under siege in one collective drawn-out massacre that will not be forgiven or forgotten for generations to come.

The opposition on Sunday launched its counterattack on the western part of Aleppo, which was originally under the control of Assad. The surprise counterattack resulted in impressive progress for the opposition in the west and southwest of the city. Yet, if the city is encircled by the Assad alliance, it will be difficult for the opposition to radically change the dynamic of the battle, particularly since Russian air raids against its positions are relentless regardless of civilian causalities.

Source: Will Aleppo be the End of Syria’s Tragedy? | Middle East Briefing

But will the defense industry allow this conflict to end?

Sound like a dumb question?  I do not think so and this is why……

The complicated, multidimensional nature of the Syrian civil war continues to discourage clear thinking in debate about U.S. policy toward Syria. The involvement in the conflict of multiple protagonists who are each anathema to the American debaters but who are opposed to each other within Syria is a fundamental complication that too often gets ignored. Basic questions of what U.S. interests are in Syria too often get overlooked. A recent example is an op-ed by Dennis Ross and Andrew Tabler of the Washington Institute for Near East Policy that argues for a bombing campaign against the Assad regime and expresses opposition to any cooperation with Russia in striking violent extremist groups such as ISIS and the Al-Qaeda-affiliated al-Nusra Front.

Source: The Itch to Escalate the Syrian Civil War | The National Interest Blog

Since the begin of the conflict Syria has been a complicated and confusing conflict….too many players wanting too many different outcomes…..

How will all this play out?  No one can give an accurate answer……the best I can do is say….BADLY!

Before I go on let me wish Hip-Hop a happy birthday….it was born on this day in the Bronx in 1973….Congrats!

That is the spin that Mr. Trump is spouting at every campaign speech these days….is he making his campaign loss everyone’s fault but his?

That was a rhetorical question…..but you know there may be NO way to prove that it is not rigged.

Say what?  Could Trump be prophetic?

With growing evidence that Russia is meddling in the US presidential election—allegedly by hacking the Democratic National Committee and releasing embarrassing emails—the concern that somebody might try to hack voting machines no longer seems outlandish. And as many as one-fifth of all votes cast in the November election could be particularly vulnerable to interference.

Computer scientists and security experts have warned for years about the vulnerabilities of electronic voting machines. Now the DNC hack has brought those fears to the fore. In the wake of the 2000 election debacle, states turned to electronic machines to avoid a prolonged and contested ballot counting process. But as Wired‘s Brian Barrett noted last week, the move toward electric voting machines turned out to be a “technological train wreck.” In Politico, Ben Wofford lays out an in-depth history of how the United States came to rely on machines that are susceptible to tampering and intrusion. One computer science expert told him that if some of these machines hadn’t been hacked, “it was only because no one tried.”

Source: Trump Says the Election Will Be Rigged. In These States, It May Be Impossible to Prove Him Wrong. | Mother Jones

Every election that the GOP losses we hear time after time about all this voter fraud…..of course most of it is just spin and excuses for not having a candidate that can win an election…..but this time it will be interesting for we have a candidate that has NO problem running his mouth.

But is it rigged or just f*cked up? 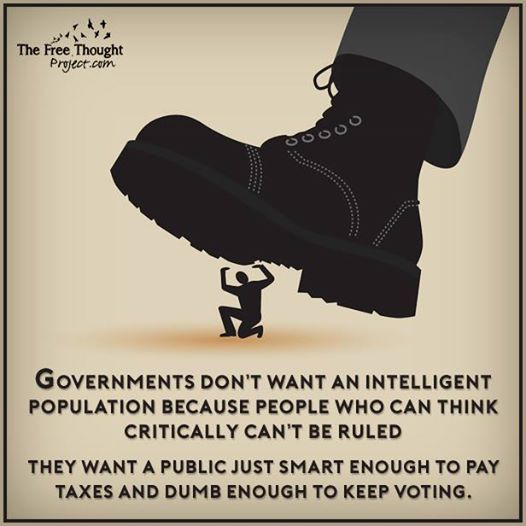 Please forgive me if I do not comment soon as usual….today I am playing tag with my doctors….always a real joy (sarcasm)……I will get back as soon as possible please bear with me…..

Have you noticed that in the conversation about Islam and such…all the Western experts are named Smith, Jackson, Hightower, Strickland or Rosenbaum?  I guess the more Anglo-Saxon you are the more of an expert you become.

When I was young my grandfather told me there was power in words…that the pen was mightier than the sword…….(not his saying)……but I never knew just how powerful some words were…..(I have been schooled)…..

Since the conventions are in full swing has anyone noticed that the Right wingers have not used the term “Radical Islam” for awhile now?  But I am sure that will change any day now.

For a couple of years most notably since ISIS has been on its barbarous rampage there has been a bunch of mental deficient that are ate up with the term “Radical Islam….it seems that they are more concerned that the president will not use the term (basically because they want him to) and for that reason we cannot defeat a bunch of terrorists.

Personally, I think it is more that without his use of the term then they would have very little to write about…..can you think of any other subject more contentious than the use of terminology?

The recent verbal attacks by the Republican presumptive nominee Donald Trump and his supporters on President Barack Obama for avoiding the phrase “radical Islam” in his public pronouncements are simplistic, racially inflammatory — and flatly misinformed.

Settling upon accurate and strategically nuanced terms to describe the post-9/11 enemy is not the product of “political correctness” (contra Trump) or a failure to understand the enemy (contra a much-discussed Atlantic cover story). Nor are objections to using overly broad terms like “Islamic radicalism” limited to Democrats. The Bush administration understood the power of words, too. It concluded that distinctions that may seem small to Christian-American ears make a big difference to the mainstream Muslims we need on our side.

Source: I worked in the CIA under Bush. Obama is right to not say “radical Islam.” – Vox

But never fear (this is for my Right turd readers)…..Donald has a plan (makes about as much sense as any of his other issue solutions)…..to defeat those pesky bastards, ISIS……

Does anyone believe that ISIS can be defeated through terminology?

I guess they do or the terminology would not be such an issue….maybe we should just find some ram horns and blow them at the enemy…..if it can destroy walls then it damn sure should be able to defeat a person or persons, right?

It took simpletons to find the answer to defeating this barbarous group….words!