There has been a bit of a history with third party candidates (there I got my historical perspective in) and the NT Times has a pretty good piece on these candidates and their campaigns…..

Major third-party presidential candidates have never had an easy time of it, even when they were former presidents or billionaires.

Recent polls show the Libertarian Party nominee, Gary Johnson, at around 10 percent nationally, a relatively high number for a third-party candidate this late in the campaign season. Major third-party presidential candidates have never had an easy time of it, even when they were former presidents or billionaires. Here’s a short history of their mostly quixotic campaigns.

Source: The Struggles of Third-Party Candidates Through the Years – The New York Times

Just to let my readers know that there have been some successful third party runs for there presidency….just not a elected person for the office.

I like so many other bloggers will scratch a scab until it bleeds….some see a Muslim conspiracy when they eat marshmallows and then there is me….I see a hawkish foreign policy if the good people of this country elect that neocon Clinton….and means more and more conflicts which we will be called upon to participate….

She is surrounding herself with tons of hawkish and neocons….especially those GOPers that are afraid the a Trump presidency will lessen their roll in government….

As Hillary Clinton begins her final charge for the White House, her advisers are already recommending air strikes and other new military measures against the Assad regime in Syria.

The clear signals of Clinton’s readiness to go to war appears to be aimed at influencing the course of the war in Syria as well as U.S. policy over the remaining six months of the Obama administration. (She also may be hoping to corral the votes of Republican neoconservatives concerned about Donald Trump’s “America First” foreign policy.)

The way it is going then all we have to look forward to is more and more chances for our troops to be involved it things that we should have stayed out of……if so then we can thank the policies of our new  president, Hillary Clinton.

Remember 2011?  It was the year before the election for Obama’s second term and the US used NATO to overthrow and kill Qaddafi….the excuse used to get involved was an age old one….a humanitarian crisis.

Most people will know very little about the country of Libya other than the Benghazi tragedy……that has gotten more press than a Kardashian.

Today there is major fighting going on all over the country…..three separate wars are raging…one against ISIS, one against rebels and one against what is called the “government”. 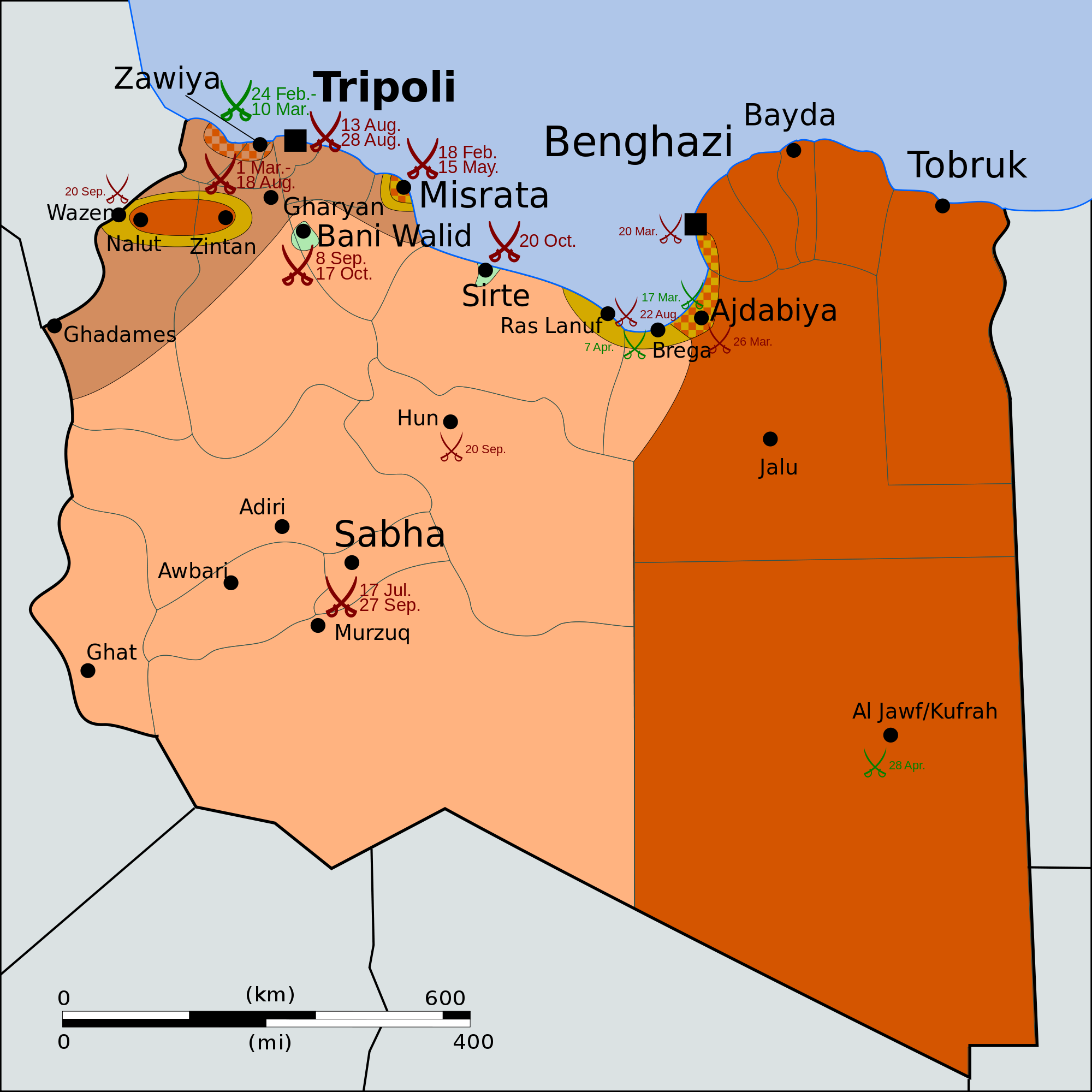 The recognized government is run by a CIA plant, a general Haftar, so that should help figure out who actually runs the country.

I bring all this up because the US has returned to using air power to help the “government”…..

The Pentagon has announced today that the US has begun conducting military airstrikes against Libya with the stated intent of defeating ISIS in that country. According to the Pentagon spokesman, the Libyan “Government of National Accord” requested that the US begin airstrikes against what they claim is an ISIS stronghold in the Libyan town of Sirte, the birthplace of murdered Libyan leader Muammar Gaddafi.

Pentagon Spokesman Peter Cook has indicated that this is the beginning of a more sustained US air campaign against Libya and that each US airstrike is approved by the US Africa Command (AFRICOM).

While the US set it sights on the “bad guys” there may be a new problem brewing which could start the whole Qaddafi process over again…..

Qaddafi’s son Seif will be released from prison…..will he want to re-do his father’s rule?

Seif al-Islam Gadhafi, the son of late Libyan leader Moammar Gadhafi, has been released from jail in Zintan, a town in western Libya, after spending nearly five years there since his capture in November 2011. After his father was killed on Oct. 20, 2011, by rebel groups that captured his hometown Sirte with NATO help, Seif tried to leave Libya.

In August 2015, the young Gadhafi was sentenced to death by firing squad by a Tripoli-based court. However, the sentence was not carried out and was condemned by Human Rights Watch that accused the self-proclaimed government of politicizing the courts.

Source: Will Gadhafi’s son be Libya’s next leader?
Libya will be many things….but it appears to be heading for a much longer and much bloodier future……and the US has started yet another lengthy involvement in yet another country….

Nearly five years after the Libyan city of Sirte was left in ruins following hundreds of NATO bombing raids and heavy fighting in the 2011 campaign to oust Libyan leader Muammar Gaddafi, the Pentagon announced a major new US military escalation on 1 August against Daesh (Isis/Isil) terrorists who have reportedly made Sirte their prime Libyan stronghold.

Pentagon spokesman Peter Cook said that US airstrikes were already underway in the coastal city of Sirte at the request of the Libyan government, and he further raised eyebrows among the press corps by adding that the air campaign did not have “an end point at this particular moment in time”.

Source: Pentagon says ‘no endpoint’ to bombing Libya, amidst reports of boots on the ground [VIDEO] | The Canary

Will sanity ever return?

Almost everyone I know has an idea what is happening in Syria…..most people have no idea what is going on in the country that we are trying to “liberate”…..there is more to this situation than throwing bombs and firing guns at each other…..

I read a couple of reports about the situation…..maybe this will help people who want to know what is happening in this country…..

The Century Foundation (TCF) has closely followed the conflict in Syria over the last year as its impact has resonated not only in the Levant but as far afield as the White House, Kremlin, and Europe. Contributors Aron Lund and Sam Heller joined TCF fellows Thanassis Cambanis and Michael Hanna to discuss the latest developments in Syria and prospects for the future. Their conversation is below.

Source: Four Perspectives on the War in Syria 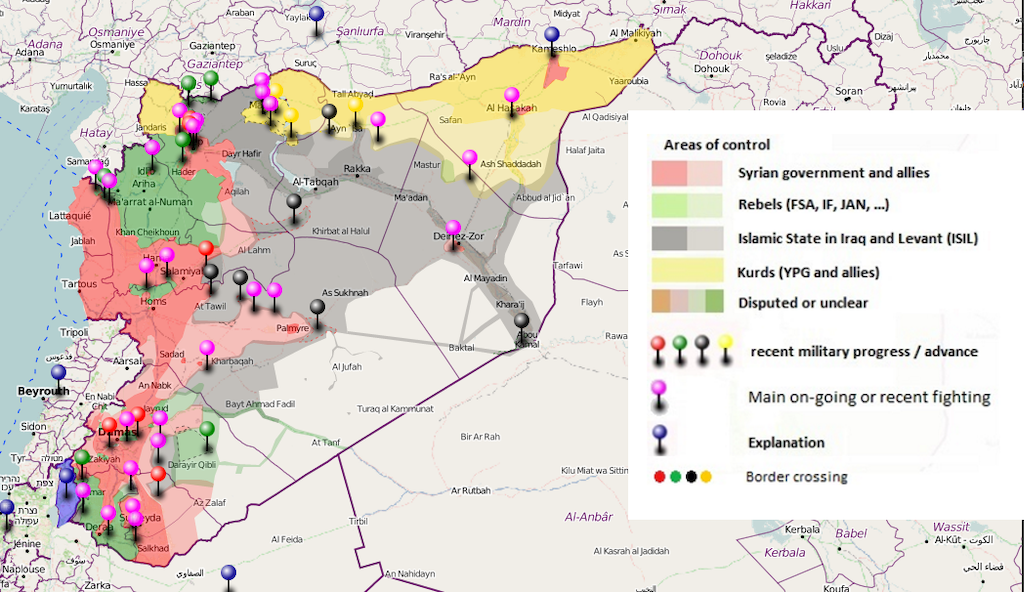 Of course there is always the subject on whether it is legal for foreign ops within a sovereign nation…….Syria is no different……

According to a statement from the Independent Doctors Association (IDA), on 23 July 2016, the regime of Syrian President Bashar al-Assad, backed by the Russian Air Force, launched air strikes against five medical facilities in opposition-controlled areas in eastern Aleppo: four hospitals, including a paediatric hospital, and the Central Blood Bank which is the last remaining blood bank in operation in the city.

This attack was perpetrated a fortnight after pro-regime forces, with the support of the Russian Air Force, seized Castello Road – the only route to and from opposition-controlled neighbourhoods in eastern Aleppo, thus impeding the distribution of humanitarian aid to at least 200,000-300,000 people living in these neighbourhoods as well as their evacuation to safer areas.