By now most Americans have their opinion of Russia’s Putin….the problem is that the media has made sure to get the public on the same page….thanx to a technique called PROPAGANDA.

The conclusion found that there amy be a good reason for Mr. Putin’s actions…….

Thanks to a Freedom of Information Act request from USA Today, we have this tidbit: a Pentagon think tank suspects Vladimir Putin may have Asperger’s syndrome. In a 2008 report obtained by the paper, a contractor for the Office of Net Assessment doesn’t mince words: A review of Putin’s movement patterns and microexpressions “so clearly [reveal] that the Russian president carries a neurological abnormality.” Further, Brenda Connors, a movement pattern analysis expert with the US Naval War College who has done work for the Pentagon since 1996, presents the “hypothesis that very early in life perhaps, even in utero, Putin suffered a huge hemispheric event to the left temporal lobe of the prefrontal cortex.” A footnote indicates the “hemispheric event” may have been a stroke, and notes that his mother, a woman in poor health, gave birth to him at 41.

The result? “His primary form of compensation is extreme control and this is isomorphically reflected in his decision styles and how he governs.” The report cites Time reporters’ observations from their Person of the Year interview (“He is impatient to the point of rudeness with small talk”); quotes other autism experts; and makes plain that without brain scanning, the theory remains just that. One of the experts cited was Dr. Stephen Porges; he tells USA Today he never saw the finished version, and that he wouldn’t go so far as to label Putin as having Asperger’s. The upshot of his analysis is that lawmakers who interact with him should attempt to do so in quiet settings, not a “big state affair but more of one-on-one situation someplace.” USA Today has the report in full.

Please do not misunderstand……..I am in NO way defending Putin and his irresponsible actions…..all I am saying is that this “study” is highly suspect……it does not pass the smell test…….

There is a movement to use a woman’s eggs to rid the fetuses of impurities…….but could all this lead to a shadow industry of designer babies?

British lawmakers in the House of Commons voted today to allow scientists to create babies from the DNA of three people—a move that could prevent some children from inheriting potentially fatal diseases from their mothers. The vote in the House of Commons was 382-128 in favor. The bill must next be approved by the House of Lords before becoming law. If so, it would make Britain the first country in the world to allow embryos to be genetically modified. The controversial techniques involve altering a human egg or embryo before transferring it into the mother. British law currently forbids any such modification and critics say approving the techniques could lead to the creation of “designer babies.”

Defects in the mitochondria can result in diseases including muscular dystrophy; heart, kidney, and liver failure; and severe muscle weakness. The techniques would likely only be used in about a dozen British women every year who have faulty mitochondria, the energy-producing structures outside a cell’s nucleus. To fix that, scientists remove the nucleus DNA from the egg of a prospective mother and insert it into a donor egg from which the nucleus DNA has been removed. This can be done either before or after fertilization. The resulting embryo would end up with the nucleus DNA from its parents but the mitochondrial DNA from the donor. Scientists say the DNA from the donor egg amounts to less than 1% of the resulting embryo’s genes. Last year, the US FDA held a meeting to discuss the techniques and scientists warned it could take decades to determine if they are safe.

Am I just worrying for nothing or is this a possibility?  Knowing the scruples are in short supply in the medical profession and are non-existent in the research realm…..what are the chances of a designer baby coming from this issue?

Could this violate some religious tenet?  I mean altering an egg should be a crime against God’s intention, right?  Would not this be tantamount to killing the child that God “gave” the parents?  I really would like a religious person to step up and go on record by answering those question for everyone.

I try not to give these so-called Christians the time of day….but there are times when their ignorance and stupidity bleed through…..

Just when we thought we’d heard it all, this guy opened his mouth.

Bert Farias (pictured), founder of Holy Fire Ministries, claims to know the “raw, naked truth” about why people are gay: They are possessed by “fart demons.” Yes, fart demons.

Oh, but it gets better.

Farias also claims that in choosing to be gay, a person chooses to engage in “unclean demonic practices.” Once that happens, they become possessed by “putrid-smelling” demons so stinky they can drive pigs to suicide.

In an interview with Charisma magazine, Farias begged gay people to “not get upset with me” as he explained his groundbreaking new theory.

“[You] will see that I am actually trying to help you,” he assured them.

He continued: “Homosexuality is actually a demon spirit. It is such a putrid smelling demon that other demons don’t even like to hang around it.”

He then went on to recount a…

Yesterday my friend over at The John Liming Report and I were having a conversation about the media and how no matter your choice it is all biased and used as a propaganda tool…..and I got this on Twitter…..it illustrates just how much the media is NOT “fair and balanced”…….

This is why the American public is the most ill-informed than any developed country…..”fair and balanced” is just a tag line that is not rooted in reality! 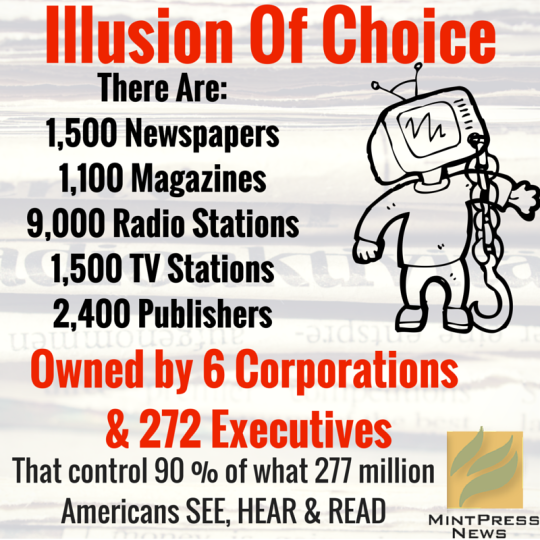 If you want to live a long life…..then exercise.

But should you?  If so, then to what point?

It’s common knowledge that a healthy person shouldn’t sit around all day, but new research on running is emphasizing the opposite danger. Running too much can be just as bad for you as being sedentary, the study suggests. Researchers tracked some 1,100 healthy runners and 413 sedentary folks over a period of more than 12 years, HealthDay reports via Medical Xpress. People ranged in age from 20 to 95. The risk of dying during the study turned out to be approximately the same among heavy runners—those who ran quickly more than three days a week for a total of more than four hours—and sedentary people who rarely exercised, Time reports.

The best plan, according to the study, was to run lightly: The group that had the best results ran at a slow-ish pace (about 5mph) less than three times each week, going for an hour to 2.4 hours total. Even a group that ran a bit more often and longer saw a slight increase in death risk, Time notes. The findings could perhaps relate to cardiovascular problems previously observed in the most die-hard runners and cyclists. “If you want to do something good for yourself, you don’t have to be extreme,” says a study author. But another researcher points to a number of possible flaws in the findings, including the fact that the hardest-running group was quite small. (Another recent study has a warning on exercise: It could hurt your teeth.)

There is a simple equation that I try to follow……..eat and exercise wisely………

“Live long and prosper”……sorry had get my geek on.