Politicians have lined up, especially Dems, to call for reform….to include former president Obama….

Barack Obama has told young people of colour “your lives matter” in public remarks that supporters welcomed as an antidote to Donald Trump’s racially charged and divisive threats to crack down on civil dissent.

America’s first black president on Wednesday expressed faith in young people in the US and said he remained “optimistic” about the future despite the police killing of George Floyd and mounting crises that Trump’s critics say leave the country crying out for leadership.

Obama spoke at an event by the My Brother’s Keeper alliance, a program of the Obama Foundation, that was called “Reimagining Policing in the Wake of Continued Police Violence.” It was the first public appearance by the 44th president since Floyd was killed by a white Minneapolis police officer kneeling on his neck, sparking nine days of nationwide protests that have been mostly peaceful but marred by some incidents of violence.

Nice words….but he had 8 years in White House to accomplish something…..and here we are.

Then there is the new ad from candidate Biden….

Again he was in the White House for 8 years and yet…here we are again.

Then there are all the pundits that have the answers to the problems….they are paid to have these…so take most of them with a grain of salt.

Let’s be honest….the police have immunity from prosecution in some cases and it was given by the Supreme Court….

Qualified immunity, created by the Supreme Court in the 1970s, shields police and other government officials from liability in civil rights lawsuits when the illegality of their actions was not “clearly established” at the time of the offense.

Not to worry there will be a mass of bills to change things when it involves the police and each one will be just to pad a resume for their next election…..or it it makes it to the Senate it will die a slow death for the Senate is where great bills go to die.

What I am saying is that ‘reforms’ will not change a damn thing….why?  They are easily swept aside but another administration.

The first thing we need to do is….stop blaming those ‘bad apples’….why?

There is a long long legacy of brutality by the police…https://www.salon.com/2020/06/03/bad-apples-are-not-the-problem-americas-police-have-a-long-legacy-of-brutal-misconduct/ 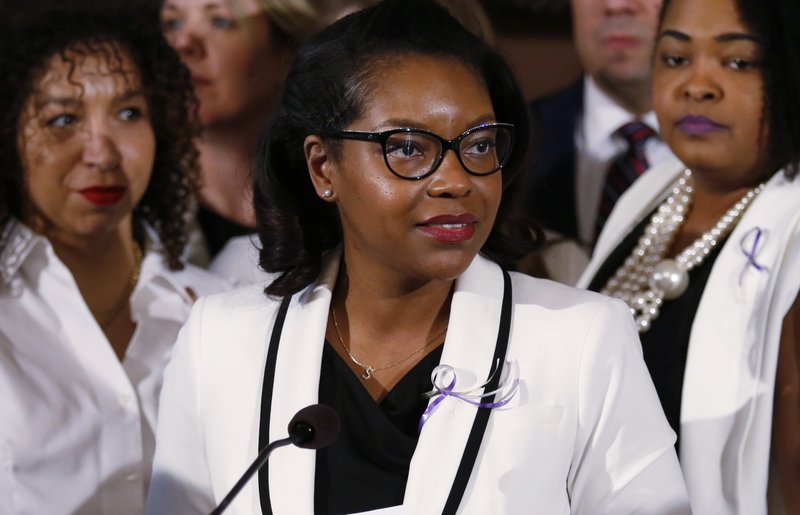 1 of 7
FILE – In this March 5, 2019 file photo Ohio House minority leader Emilia Sykes delivers the Democrat’s response to the Ohio Governor Mike DeWine’s Ohio State of the State address at the Ohio Statehouse in Columbus, Ohio. Only about a third of U.S. states have enacted laws addressing police use-of-force in the six years since a national protest movement emerged over the killings of black men by white police officers. Sykes criticized GOP lawmakers this week for failing to enact laws recommended by former Ohio Gov. John Kasich’s task force that hold police accountable. (AP Photo/Paul Vernon)

A wave of police killings of young black men in 2014 prompted 24 states to quickly pass some type of law enforcement reform, but many declined to address the most glaring issue: police use of force. Six years later, only about a third of states have passed laws on the question.

The issue is at the heart of nationwide protests set off by the May 25 death of George Floyd, a black man who died after a white police officer in Minneapolis pressed a knee into Floyd’s neck for several minutes while he pleaded for air.

Now, some lawmakers and governors are hoping to harness the renewed wave of anger to push through changes on the use of force they couldn’t manage after 2014, a year that included the deaths at the hands of police of Michael Brown in Ferguson, Missouri, Eric Garner in New York and 12-year-old Tamir Rice in Cleveland.

“We’re absolutely at a point in time where we have to do more,” said Maryland state Del. Vanessa Atterbeary, a Democrat who will chair a working group announced this week that will take up use-of-force standards for that state.

Pushback from politically influential law enforcement unions prompted some states’ use-of-force proposals to stall, while others have opted for voluntary programs to change policing practices. In some states, lawmakers have even broadened the powers of police, such as increasing penalties for those who attack officers or, as in Tennessee and Utah, limiting the power of independent review boards that investigate police conduct.

I do not have all the answers but a start would be to recall all the military equipment and let the police use the law as the weapon not the arms made for war.

Training in law enforcement and community not tactics for going to war.

One attempt to do something (to illustrate my point)…..

And it ended with a thud of non-action.

Another attempt from the same timeline….

The Demilitarization of Police Act requires law enforcement agencies to disclose and justify the need and cost of any military equipment they own (e.g. machine guns, armored vehicles, night-vision scopes, camouflage fatigues and flash-bang grenades). Law enforcement agencies must provide the [legislature/council/commission] at least 90 days notice before any future acquisition of military equipment.

A Case for de-militarization…..

Time to end for good the 1033 Program which is the way police gets their weapons of war to use on the civilian population.

Just a few reasons why I do not trust the politicians and pundits and their calls for reform…..

The call for reforms is what you do when you want nothing to be done.