Hopefully everyone is using rational thought…..I mean that is something that is sadly missing from the Donald the Orange and his minions.

The media has the news of the day and the rest of the story gets told if there is time remaining after the “breaking news”…..so let the Old Professor take you through those stories not important as others…..

Remember when the Dept. of Agriculture use to pay people NOT to plant certain crops…..well they are going to do something similar for oil producers……they will get paid to NOT Produce and then get paid for the oil in storage…win-win…..

The Trump administration is contemplating paying oil companies to leave their product in the ground, a measure that could help boost the struggling industry while the market has been crushed by an oversupply of crude.

According to reporting from multiple outlets, the Department of Energy (DOE) is drafting a plan that would pay companies to leave as much as 365 million barrels untapped by considering it part of the nation’s emergency stockpile.

The plan was reported first by Bloomberg, and DOE did not respond to request for comment from The Hill.

Sen. Tom Cotton and Rep. Dan Crenshaw have introduced legislation that would allow Americans to sue China in federal court over the death and economic damage wrought by the “Wuhan Virus.”

“By silencing doctors and journalists who tried to warn the world about the coronavirus, the Chinese Communist Party allowed the virus to spread quickly around the globe,” Cotton (R-Ark.) said in a statement.

“Their decision to cover up the virus led to thousands of needless deaths and untold economic harm. It’s only appropriate that we hold the Chinese government accountable for the damage it has caused,” he added.

Careful morons!  You might be opening up a can of worms for Trump.

Speaking of the can or worms…..

As Dr. Anthony Fauci has said, it didn’t have to be this bad in the U.S. The world’s richest country with the strongest economy and a population of 330 million people has more coronavirus cases and deaths from COVID-19 than any other country, including China, whose population is more than four times larger.

The U.S would have experienced fewer deaths and less economic damage had the federal government been better prepared—or simply as prepared as some other countries, even smaller and poorer ones.

Not what the two worthless lumps had in mind?

Both are worthless, spineless sycophants desperately trying to look like they are doing something good….they are failing and most of all they are failing the American people that elected them.

How many times have you heard Donald the Orange say that keeping the isolation order will kill more people than the virus…..it is bullshit!

Never at a loss for words, or half-thought-out arguments, titans of the American right from President Donald Trump to Senator Ted Cruz have latched on to a doozy: You have to reopen the economy despite the ongoing Covid-19 pandemic, quickly, lest a wave of suicides, domestic battery and the like overwhelm even the death toll from coronavirus.

“That’s gonna cost real lives,” Cruz said in an interview. “Our objective should be to save lives, and that means we need to fight this pandemic and get people back to work.’’

Apparently, the schools where Trump and Cruz studied math have been closed for longer than the 34-day stretch of distance learning we’re soldiering through where I live.

And yet with all the expert info available Trump has conned governors into opening up by 01 May…….

President Trump issued an all-caps plea Friday to “LIBERATE” three states under lockdown orders from Democratic governors. “LIBERATE MINNESOTA!” he tweeted, and followed it up with similar tweets on Michigan and Virginia. As Politico notes, all three states saw public protests this week by people chafing against stay-at-home orders from their respective governors. With his tweets, Trump appeared to be supporting those protests, per the Hill. The New York Times story goes much further, asserting that Trump “began openly fomenting far-right protests of social distancing restrictions in states where groups of his conservative supporters have been violating stay-at-home orders.” The White House did not immediately respond to comments asking for clarification on Trump’s message, reports USA Today.

The tweets come a day after Trump laid out national guidelines for states to reopen and struck a more cooperative message: “We are not opening all at once, but one careful step at a time,” he said. He told governors that “you’re going to call your own shots.” Also on Friday, Trump renewed his criticism of New York Gov. Andrew Cuomo, tweeting that Cuomo “should spend more time ‘doing’ and less time ‘complaining,'” reports the Hill. Trump ticked off various complaints of his own, including, “We built you thousands of hospital beds that you didn’t need or use.” Cuomo responded in real time at his daily briefing, saying the state has, in fact, used many of those beds. “How many times do you want me to say thank you for doing your job?” he added, referring to Trump’s complaint about a lack of thanks. In yet another tweet, Trump told states to “step up their TESTING!” and Cuomo said the feds needed to help with that.

I hope this bull headed stupidity does not kill too many people.

I was reminded by a loyal regular reader of IST, Ned Hanson,  that in 1918 Philadelphia did not cancel a parade and it was deadly a decision……

On September 28, 1918, a Liberty Loan parade in Philadelphia prompts a huge outbreak of Spanish flu in the city. By the time the pandemic ended, an estimated 20 million to 50 million people were dead worldwide.

Influenza is a highly contagious virus that attacks the respiratory system and can mutate very quickly to avoid being killed by the human immune system. Generally, only the very old and the very young are susceptible to death from the flu. Though a pandemic of the virus in 1889 had killed thousands all over the world, it was not until 1918 that the world discovered how deadly the flu could be.

And Trump cannot learn for he is all knowing…..and that makes him all stupid.

Tell you what…..I will have more confidence in the Trump decisions if he was out there proving he is right……go to Michigan and stand with all those morons demanding the state open up…..and I wait………. 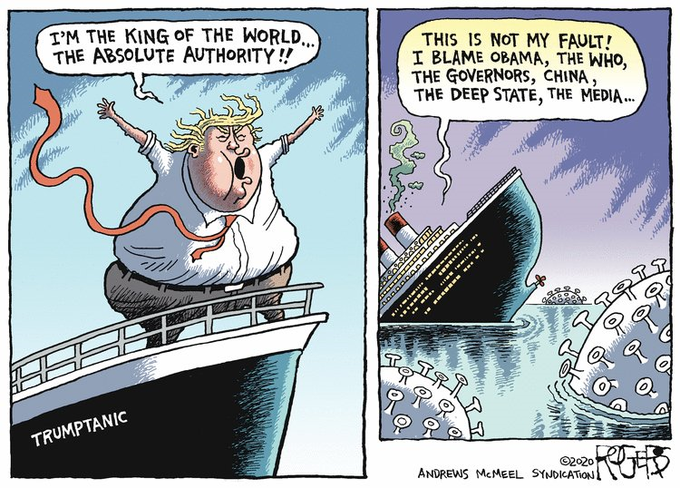 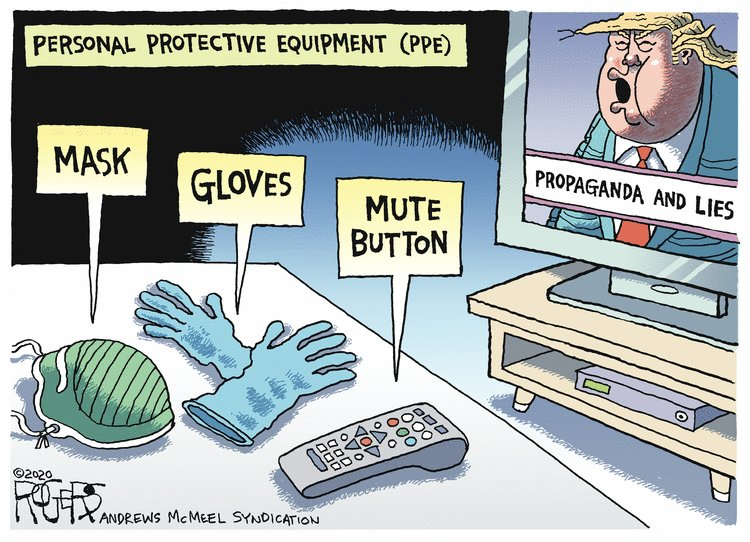 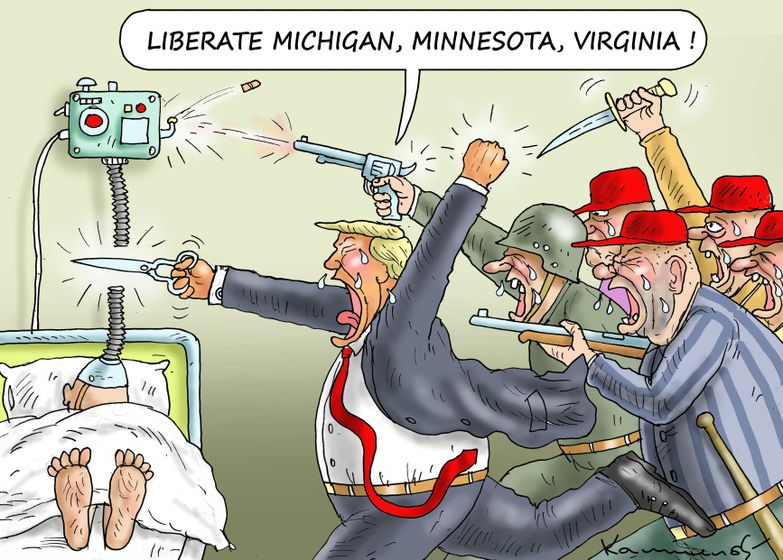