We have enough Covid-19m news…minute by minute…..but there are other thoughts that I want to share with my readers.

New research provides evidence that the active ingredient in so-called magic mushrooms can affect brain processes related to emotional functioning long after the substance has left one’s body. The findings, published in Scientific Reports, shed new light on the long-term effects of psilocybin.

Rather than examining the brain while it’s under the influence of psilocybin, the researchers from Johns Hopkins University School of Medicine were interested in the enduring impact of the substance.

Cannabis is growing more popular by the month….and because of it more and more research is finding its way to the public…..

There have been dramatic changes worldwide in the attitudes toward and consumption of recreational and medical cannabis. Cannabinoid receptors, which mediate the actions of cannabis, are abundantly expressed in brain regions known to mediate neural processes underlying reward, cognition, emotional regulation and stress responsivity relevant to addiction vulnerability. Despite debates regarding potential pathological consequences of cannabis use, cannabis use disorder is a clinical diagnosis with high prevalence in the general population and that often has its genesis in adolescence and in vulnerable individuals associated with psychiatric comorbidity, genetic and environmental factors. Integrated information from human and animal studies is beginning to expand insights regarding neurobiological systems associated with cannabis use disorder, which often share common neural characteristics with other substance use disorders, that could inform prevention and treatment strategies.

Women have been available for combat for years and now we have a 5 year status report…..

It has been five years since the ban on women in combat was lifted in 2015 and women began integrating previously closed combat arms billets in January 2016. Five years is the length of a service academy contract and longer than the average enlistment contract. Two years ago, there was mostly good news on integration efforts and there have been coverage of female “firsts” since. Now, sufficient time has passed to note the status of integration across components and to see returns on recruitment and retention.

The military personnel model has traditionally been premised around a young male force supported by stay-at-home spouses. Such a model is built into how the military conceives of its personnel, from the language embedded in parental leave policies that assumes a woman is the primary caregiver to the names of base support and spouse groups. An industrial-age model leaves much to be desired for dual-professional couples as well as those service members who want to have families. Updating this model to become more agile is not just critical for supporting talent management across the force, but also is essential for creating inroads and support for women in combat arms billets, where women are still a significant minority.

A Final Note–do you want to be a “Starship Trooper”?

The Space Force will start taking applications on 01 May……

The U.S. Space Force next month will start accepting applications from current military service members who are interested in moving over to the new space branch. The initial window for applicants starts May 1 and only lasts for 30 days, officials said April 16 during a town hall event live streamed on Facebook.

Towberman on April 3 was sworn in as the top enlisted leader of the U.S. Space Force. During the town hall forum, Towberman and Chief of Space Operations Gen. John Raymond answered questions on a range of topics, mostly on administrative and personnel issue

Did you know that if you criticize someone for insider trading then you are a “socialist”?

Sen. Kelly Loeffler (R-GA), who has become a lightning rod for criticism after she dumped major portions of her stock portfolio shortly after receiving classified briefings of the COVID-19 pandemic earlier this year, is now denouncing her critics as “socialists.”

The Daily Beast reports that Loeffler went on Fox News Friday to defend herself against charges that she profited by using insider knowledge of the COVID-19 crisis.

Her profit taking was an criminal enterprise so she should forfeit her ill gotten gains and do time…..5 years ….no parole….

Then there is that total douche bag in the House….Jim Jordan, you know him he is under investigation for knowing about sexual abuse of students at Ohio State…..he is a Trump BJ giver is now on the band wagon with the persecution of governors that have been mean to the president…..

Anger at COVID-19 shutdown orders boiled over on Fox News on Saturday night.

As ABC, CBS and NBC aired the Global Citizen “One World: Together At Home” concert to raise money for the World Health Organization’s battle against the coronavirus pandemic, Fox chose to air “Justice” with former Judge Jeanine Pirro.

The show began with an angry rant from the host about a “Wuhan virus” for which China must be punished.

There is a reason he runs to FUX News when he pretends to act like a person who cares……FUX is where truth and accuracy goes to die.

Finally, at least someone is doing the right thing and prosecuting LIARS!

The United Arab Emirates (UAE) will fine people up to 20,000 dirhams ($5,500) if they share medical information about the coronavirus that contradicts official statements.

Its government, which issued the decision, made the health ministry and other state health institutions responsible for distributing “true” health information and guidelines to the nation.

“It is forbidden for any individual to publish, re-publish or circulate medical information or guidance which is false, misleading or which hasn’t been announced officially … using print, audiovisual or social media, or online websites or any other way of publication or circulation,” state-run news agency WAM reported on Saturday, citing the government directive.

I am NOT a fan of the UAE but on this I agree with them 100%….it should be considered by all nations as they fight this disease.

All those mental midgets protesting the re-opening of the nation….make them sign this statement….. 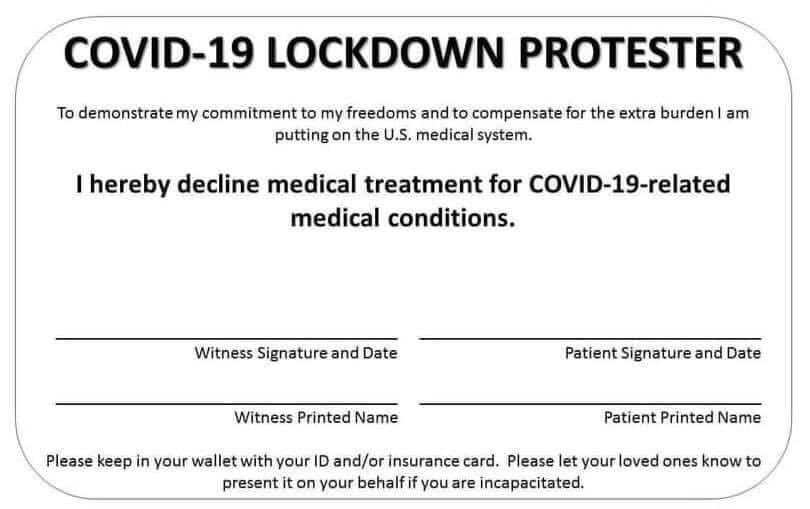 There you have my small news round-up…..

Sorry for the redundancy but these types of people chap my ass!

We have heard the stories of those pigs that are price gouging…..and those that are hoarding stuff…..but the worse of the worse are those religious types that are pretending to care about their flocks.

Like that idiot pastor in Louisiana that defied the isolation rule and pack his so-called church……and that has lead to the death of a parishioner….

A parishioner at the Life Tabernacle Church in Central, Louisiana has reportedly died from the coronavirus weeks after the church’s pastor defied his state’s ban on large gatherings to hold packed church services.

Local news station KALB reports that a coroner’s report of a 78-year-old parishioner of the church revealed that he had died after being infected with COVID-19.

By the way the pastor’s name is Tony Spell

Where have I heard that name?   Thinking…..thinking…..

In a video posted to YouTube on Wednesday, the Rev. Tony Spell called on the public to get behind a new online challenge he is dubbing the #PastorSpellStimulusChallenge.

There are three rules to the challenge, Spell said in the video. The first rule is that it starts on Sunday. The second, he said, is for people to “donate your stimulus money.”

These evangelists care more about cash than their flocks…and that goes for Falwell, Graham and any other money hungry religious leader.

First this fool can BITE ME!  Second…a man of GOD MY ASS!

These people are why Christianity gets a bad name…..they do not represent the teachings of Christ….only their individual GREED!

Stay away from charlatans like this “man” (I use the term “man” loosely) for the “flock” means nothing to them….they just see dollar signs not the faithful.

I am sure that we all have heard the horror stories of the possibilities of food shortages soon if something does not change.

We pretty much know that we Americans eat less food than we throw away……and this disease has brought up more questions about our food supply…..

I read a report that said Florida farmers are selling directly to consumers to avoid a produce dump…..

There are nearly 47,000 farms in Florida that are providing the world with food and our communities with jobs.

To help ease the pain of lost revenue due to the steep drop in demand, farmers are now selling their crops directly to consumers.

If you can’t find certain fruits or veggies at your local grocery store, CLICK HERE to see if there is a farm near you and pick up what you need.

On the Florida Farm To You webpage, you can learn where to get farm-fresh items like Florida-grown produce, milk, seafood and more, straight from Florida farmers.

WAIT!  A produce dump?  You mean that people are going hungry and these farmers cannot call the nearest bank to tell them to come pick up fresh veggies and fruit?

Food is being thrown out at an alarming rate……

In the Salinas Valley of California — known as America’s salad bowl — we visited the municipal dump. The fertile strip of land surrounding the town of Salinas produces an estimated 70 percent of U.S. salad greens.

At the dump, we caught up with Operations Manager Cesar Zuniga as a dump truck pulled in. It was filled to the brim with salads and other waste from nearby farms.

“This one looks like a mixed load,” Zuniga says. As it tipped its load out tumbled a 15 foot heap of greens.

And a lot of it looked crisp and ready to eat.

“Some loads … look very fresh,” Zuniga says. “We question, wow, why is this being tossed?”

Zuniga says the load that arrived today is pretty typical. “This is what we see through the spring and fall months: We see a lot of food waste from the salad processing plants,” he says.

As we step closer to the dumped load, Zuniga picks up a bag of salad and looks at the sell-by date stamped onto the package.

Hungry people and these businesses are throwing good food way?

Are you telling me that a food pantry would not go pick it up for distribution….time to make these businesses pay for their cavalier attitude toward the hungry….if anything it should be a crime to throw away food that is still fresh.

This reminds me of the coat debacle from years ago when Walmart got caught throwing away good winter coats with NO thought of the homeless and the needs they may have had…..

The names of companies that are throwing way food should be posted and we consumers should boycott them as much as possible.