The big news of the day is that of Colt and the AR-15.

In a huge announcement the firearms manufacturer has stated that they will cease making the AR-15 for civilian markets…..

Gun-maker Colt is suspending its production of rifles for the civilian market including the popular AR-15, the company said Thursday in a shift it attributed to changes in consumer demand and a market already saturated with similar weapons. The company said it will focus instead on fulfilling contracts with military and police customers for rifles, the AP reports. “The fact of the matter is that over the last few years, the market for modern sporting rifles has experienced significant excess manufacturing capacity,” Colt’s chief executive officer, Dennis Veilleux, said in a statement. “Given this level of manufacturing capacity, we believe there is adequate supply for modern sporting rifles for the foreseeable future.”

Veilleux said the company, which emerged from bankruptcy in 2016, remains committed to the Second Amendment. He said the company is expanding its lines of pistols and revolvers. Despite a national debate on gun control, Colt’s decision seems driven by business considerations rather than politics, said Adam Winkler, a gun policy expert at the University of California, Los Angeles School of Law. Given “the history of Colt being a completely disorganized, dysfunctional company that goes into bankruptcy and can’t keep anything going properly, my assumption is that this is a business decision that is being driven by their own business problems,” he said. Still, Winkler said the company’s decision risks alienating and angering its remaining customer base.

Will this cease the deaths?

It will just limit the amount of weapons available.

Slowly but slow the Dem field of candidates is getting smaller….the newest candidate to end his faltering campaign is the Mayor of NYC, Bill DeBlasio…..

Bill de Blasio’s 2020 campaign for president is over. New York City’s mayor called it quits on Friday, telling MSNBC’s Morning Joe program that “I feel like I’ve contributed all I can to this primary election, and it’s clearly not my time,” per Politico. De Blasio said the “central reason” he’s out is his inability to meet the minimum requirements to qualify for televised debates. “The bar is so high so early that for a lot of us, clearly, some of my fellow chief executives, governors couldn’t make that cut,” he said.

De Blasio, 58, says he will return to New York City to focus solely on wrapping up his second term as mayor. He is ineligible to run for a third term, but in an essay at NBC News, he writes that “fighting for working people and ensuring that New York City remains the vanguard of progressivism will continue to be my missions.” An analysis at Vox points out that de Blasio had a near-impossible task trying to compete against two other “big-name progressives,” Bernie Sanders and Elizabeth Warren.

As my tradition for the 2020 election when someone leaves the campaign trail…..I will let Queen show them the political door…..exit stage left………

After the disaster of the Congressional Hearing…..the question needs asking and needs a good answer.

Look at the Democrats in Congress….what do they stand for?

There is a serious lack of authority from a committee of the US House of Representatives….they all sat there let some half-wit thug show them the door.  Basically Lewandowsky dropped his pants the wiggling his penis at the Committee and the Nadler let him get away with it.

We know what the candidates have on their minds……there is Medicare For All…..and a Green New Deal……and some vague criminal justice thoughts and financial reforms by the boat load…but in reality there is nothing to their “policies” because NONE of it will ever see the light of day.

We are talking about a full time body that works on a part time schedule….about 3 days a week when in session…..weekends off with Friday and Monday for travel to meet with the high dollar donors.

Democrats of old knew how the game of politics was played…….the Dems of today are willfully unqualified to play the game.

As the saying goes….”Democrats have great ideas but suck at the game of politics.”

And this is why the so-called “moderates”….have proven what I suspected for many years…..Dems are cowards and truly SUCK at politics and a doable message.

In January of 2019 I wrote that the Dems would be a major disappointment and my opinion of them has not changed……https://lobotero.com/2019/01/03/democrats-will-be-a-major-disappointment/

If you are a Dem then please tell me what do the Dems running for the presidency stand for?  Then take a look at the Dems in Congress and give me the same answer….do they truly stand for anything other than being re-elected?

The Mainstream Media is in the bag with the endless wars we are now fighting.

Look at the prospect of the war in Afghanistan coming to an end….and then look at the reaction of the media….both liberal and conservative……they join hands in opposition to the end of this war.

It is a rare thing, indeed, when both establishment and media “liberals” and “conservatives” agree on anything. Nevertheless, lightning has proverbially struck this week as both sides attack President Trump with equal vehemence. Thus, here we are, and here I am – in the disturbing position of defending Trump’s (until Sunday) peace policy for Afghanistan. Nonetheless, though I don’t particularly like the way this position befits me, I’ll take it as a sign that I just might be on to something when the clowns at Fox News and MSNBC, alike, vociferously disagree with my position on an American forever war.

Few in the political or press mainstream ever much liked Trump’s regularly touted plans to extract U.S. troops from Afghanistan. Even “liberal” Rachel Maddow – who once wrote a book critical of US military interventions – turned on a dime and became a born-again cheerleader for continuing the war. After all, in tribal America, if Trump proposes it, the reflexive “left” assumes it must be wrong, anathema even. That’s come to be expected.

Only this time, even his own party has attacked the president after he let it slip that he’d planned a secret peace conference with the Taliban at Camp David and might even have announced a deal to gradually end the US role in the war during the anniversary week of the 9/11 attacks. Gasp! How dare he? End a failing war, save the lives of perhaps hundreds or thousands of US troops, and do so near the 9/11 anniversary? This amounts to heresy in imperial Washington D.C. But it shouldn’t be unexpected: Trump’s own policy advisers have opposed any meaningful steps to end the Afghan War from the get go.

The Media’s Betrayal of American Soldiers

I have been writing about this betrayal for years and now I am pleased to see that I am not alone with this criticism.

The media spends more time making the case for endless wars than it does reporting the the events of said wars.

It is understandable why this is so pathetic…..it is because of the entertainment industry……for they own the MSM……

As Sen. Bernie Sanders (CJR, 8/26/19) has recently noted, corporate ownership of media interferes with the core societal function of the press: reporting and investigating key issues at the intersection of public need and governance. And nowhere is that more critical than when it comes to climate. Due to their corporate conflicts of interest, trusted news authorities have diverted us from our primary responsibility—assuring a viable habitat for our children and grandchildren.

What will the US do?

President Trump emphasized that he believes the US has “many options” for what to do with Iran after allegations Iran had attacked Saudi Arabia’s oil infrastructure with drones.

Trump told reporters “we’ll see what happens,” while emphasizing that he has “many options.” He described a full-scale war against Iran as the “ultimate option,” and said that “there are options that are a lot less than that.“

While giving war a position of primacy among his options doesn’t exactly fit with his comments the last couple of days saying he doesn’t want to start a war, the comments still suggest war is unlikely.

In the course of his comments, President Trump also talked of imposing a number of new sanctions against Iran. He was not specific about what that would mean, beyond it being “substantial.” 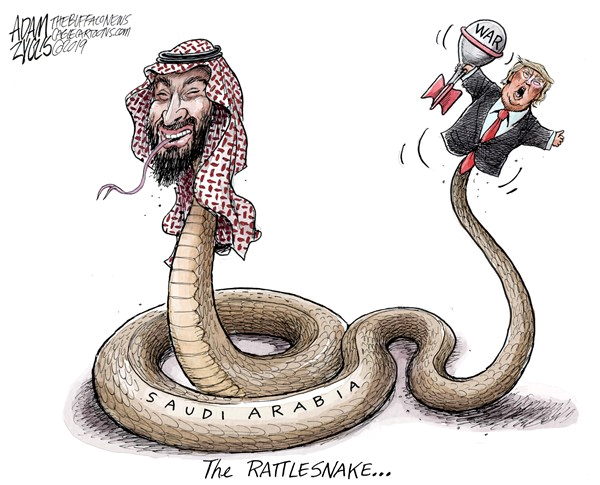 Sec. of State Pompeo wants a war with Iran……

The first US official to declare Iran to blame for Saturday’s drone attacks in Saudi Arabia, at a time when others were looking for evidence, Secretary of State Mike Pompeo is continuing to try to advance this into his always hawkish position toward Iran.

Preparing to head to Saudi Arabia to meet with officials, Pompeo is now declaring what happened “an act of war,” and is now looking to use that bellicosity cobble together a coalition against Iran.

Pompeo is meant to meet with the Saudi Crown Prince to try to talk up coordinated US-Saudi actions against Iran. It’s not clear he’s going to be able to do much, however, as President Trump has already as much as said that he doesn’t intend to escalate this into a war.

Pompeo has been trying to escalate tensions between the US and Iran for months now, and this is just a continuation of that. While much was initially made of the drone strikes, there is a lack of interest in turning this into a war, and Pompeo will likely have to continue with such rhetoric.

President Trump is continuing to reject the idea of starting a war with Iran. After dismissing Sen. Lindsey Graham’s (R-SC) calls, saying not starting a war was a sign of strength, he continued to roast Graham, citing Graham’s support for the Iraqi War, and saying reporters should ask “how did going into Iraq work out?“

Graham is being predictably hawkish, but it seems that he’s in a minority in the Senate, where even many of his fellow Republicans are expressing reluctance to escalate precipitously, and are urging debate on the matter instead of hasty action.

Speaking of hawks, President Trump is reportedly facing intense criticism behind closed doors from recently fired John Bolton, who attended a closed-door lunch on Wednesday during which attendees say he repeatedly ripped Trump for policy decisions.

Bolton’s objections, surprising nobody who was paying attention, were to Trump’s interest in diplomacy. Bolton insisted that diplomatic overtures to both Iran and North Korea were doomed to fail, and even trying to hold talks sends a “terrible message.”

Again…does everyone want a war…….

Iran’s foreign minister has warned of “all-out war” in the event of US or Saudi military strikes against his country, and questioned whether Saudi Arabia was prepared to fight “to the last American soldier.”

Javad Zarif told CNN that Iran hoped to avoid conflict, adding that the country was willing to talk to its regional rivals Saudi Arabia and the United Arab Emirates. But Iran would not hold talks with the US unless Washington provided full relief from sanctions as promised under the 2015 nuclear deal, Tehran’s top diplomat said.
(CNN)

Damn…..can these people just shut up and let the situation calm down?
This country does not need another endless war.
“Lego Ergo Scribo”