Today we Americans celebrate what passes for Labor Day……we go about BBQ and beer and games and seldom remember that the brave people a hundred years ago had to fight for the benefits that Americans take for granted today.

So as a service to my readers I give them a history of the labor movement….

The labor movement in the United States grew out of the need to protect the common interest of workers. For those in the industrial sector, organized labor unions fought for better wages, reasonable hours and safer working conditions. The labor movement led efforts to stop child labor, give health benefits and provide aid to workers who were injured or retired.

The origins of the labor movement lay in the formative years of the American nation, when a free wage-labor market emerged in the artisan trades late in the colonial period. The earliest recorded strike occurred in 1768 when New York journeymen tailors protested a wage reduction. The formation of the Federal Society of Journeymen Cordwainers (shoemakers) in Philadelphia in 1794 marks the beginning of sustained trade union organization among American workers.

Labor strikes?  When was the very first labor strike in history?

The most important cultural value in ancient Egypt was harmony; known to the Egyptians as ma’at. Ma’at was the concept of universal, communal, and personal balance which allowed for the world to function as it should according to the will of the gods. Throughout most of Egypt’s history this belief served the culture well. The king’s primary duty was to uphold ma’at and maintain balance between the people and their gods. In doing so, he needed to make sure that all of those below him were well cared for, that the borders were secure, and that rites and rituals were performed according to the accepted tradition. All of these considerations provided for the good of the people and the land as the king’s mandate meant that everyone had a job and knew their place in the hierarchy of society.

At certain times, however, the king found it difficult to maintain this harmony due to the press of circumstance and a lack of resources. This situation is clearly apparent toward the end of each of the three periods known as “kingdoms” and sometimes during but an especially interesting incident during the New Kingdom (c. 1570- c.1069 BCE) stands out because it occurred before the actual decline of New Kingdom power and, according to some scholars, marks the beginning of the end: the first labor strike in recorded history.

Labor is a subject I like to keep my knowledge flowing…… for back years ago I was a labor organizer for the IWW……so I give you some of the songs from the past labor fights…..enjoy some tunes.

Finally Americans are starting to wake up to how damn important the labor movement is as well as unions…..

Sixty-four percent of Americans approve of labor unions, surpassing 60% for the third consecutive year and up 16 percentage points from its 2009 low point. This comes 125 years after President Grover Cleveland signed a law establishing the Labor Day holiday after a period of labor unrest in the U.S.

I hope everyone has a good day enjoy family, food and fun….Be well and Be safe! 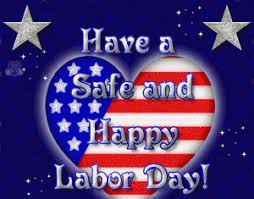 Please take some time out of your day’s activities to remember those that were and are in the path of Hurricane Dorian…..

This will be my only post for the day…..As Always Be Well, Be Safe……