If this happens to you….what should you do?

Simple as using your phone…… 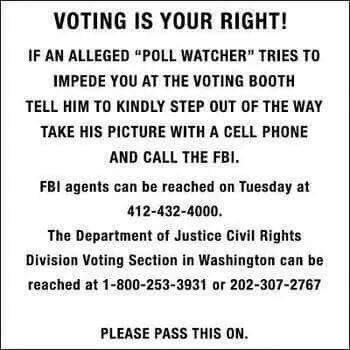 If you are reading this then I am still out….I programed it to be published if I had not returned by noon…..

There has been lots of jaw flapping this election about voting rights….that right that many of us take for granted but do you really know how hard it was to get the right?

That’s right election day and another one of my historic perspectives….take a stroll through American history and see about your right to vote……

A history of voting rights in America.

Source: Who got the right to vote when?

sad that a publication knows more about American voting rights than most Americans…..go figure!

The day has finally arrived….maybe this long nightmare of lies and unrealistic promises will come to a close…..but first a little music before you head out……

There is no secret here that I voted for Stein and with every post I have explained why I am not voting for one of the two major players…..I have received push back from some on my choice which does not matter for I made my choice and did what I said I would do…voted for the person that I think would be the best for the country and its people……

With all that said I ran across an article by a person that explained why they were voting for Dr. Jill Stein and in more eloquent words explains the reasons that I chose to do so…….and yes I know that she is a flawed candidate….but to me way less so than the other two……

Keep in mind that this was written during the highly contested primaries…..

Even as the system crumbled around them, Sanders’ millions of supporters have done work that’s nothing short of miraculous. Their fight against the party establishment and that establishment’s friends in the corporate media brought Sanders closer to victory than many thought possible and heightened awareness around crucial issues like economic inequality and the corruption of our democracy.

To continue to force the gears of political change to turn, we can’t just hold our noses and vote for Clinton or sit this one out and wait another four years for a revolution.

The one leading indicator for me was when Jill Stein promises to re-invest the billions wasted on America’s foreign policy into job creation and universal healthcare.

I am pleased with my vote….are you? 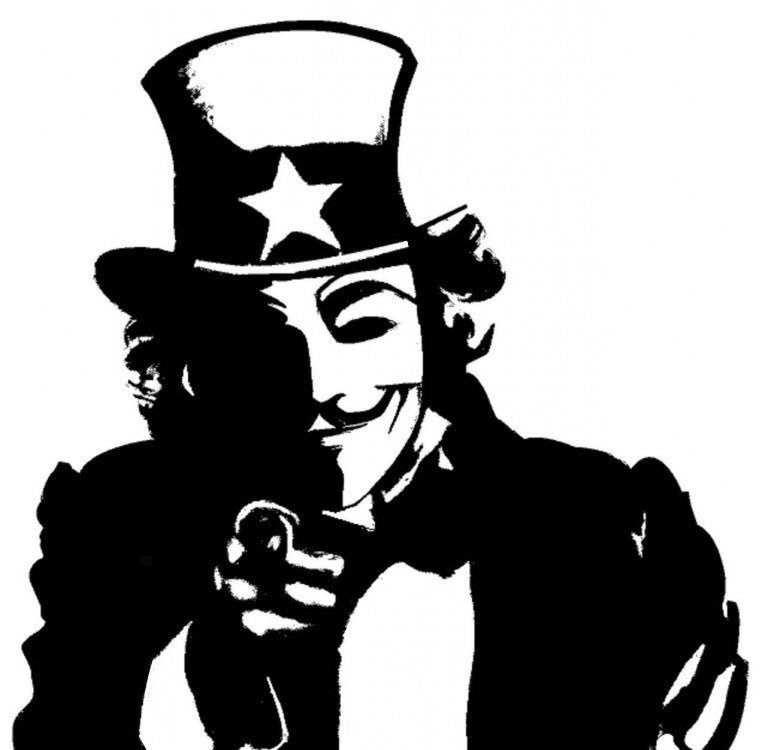 I’m headed out now to see what is happening at the polls around my area….a bit of rain for the first time in 75 days…..gonna be messy out.

Today is the day that so many have been waiting to arrive….they get to sit on the edge of their chair and pray that their person will win the White House and the country will magically be transformed into this “wonderland” that has been promised for 200 years and yet somehow has eluded the possibility altogether.

The media and its pundits have their polls and opinion and thanx to them this has become the biggest shit storm in a century.

Then there is all the faux comments about the election being rigged…..personally I think it is just a set up so when one loses they have an excuse to feed the flames of whiny voters……but not to be out done the media has come up with a “brilliant” plan to help them drive that accusation as well as everything else about this election….

If misery and politics make strange bedfellows, their Election 2016 love child in the Fourth Estate is a nascent project called Electionland. As Politico reports, major media outlets are abandoning the time-honored practice of scooping each other in order to combine reporting forces in the name of making sure Election Day is as clean as possible. “It’s an entire national newsroom, essentially only looking at problems facing people who vote,” says a senior reporting fellow at ProPublica, the nonprofit which gave birth to Electionland earlier this year and was quickly joined by the likes of the New York Times,USA Today, and Google News Lab, as well as scores of more regional media outlets like the Arizona Republic, Miami Herald, and the Virginian-Pilot.

Notable among those who declined to partner up: CNN and the Associated Press. Yet it’s what Quartz calls “an unprecedented gathering of journalists,” and includes newsrooms set up at City University of New York and at 13 journalism schools. On Tuesday, Electionland will watch social media, Google search trends, and data from the Election Protection project, as well as receive reports from reporters on the ground. “This is a really interesting experiment,” says a politics editor at USA Today. “I don’t know exactly how it’s going to work. I don’t think any of us do. It seems like the right thing to do.” Adds Snopes’ managing editor: “It’s going to be a sh– show.”

To me this sounds like yet another attempt for the media to control the news cycle as they have done for decades with their polls and pundits…..

And then there is this bit of “news”……about exit polls……

In the old days (meaning before this election), results from exit polls weren’t released by the news groups until all polls had closed. But thanks to a joint initiative via Slate, Vice News, and a company called Votecastr, how exit polls are handled this time around will be a “dramatic departure,” Politico reports. This “unprecedented Election Day experiment,” as Slate puts it, will offer real-time projections of who’s ahead in the polls at any given time in seven battleground states. “We’re hoping to fill in the 24-hour void between the last pre-election poll analysis and the counting of the votes with data that can begin to answer the heretofore unanswerable question: Who’s actually voting?” Sasha Issenberg of Votecastr tells Politico. The effort will cover Florida, Iowa, New Hampshire, Nevada, Ohio, Pennsylvania, and Wisconsin, as well as a modified look at Colorado’s results.

But Votecastr is courting controversy, as experts fret that word of who’s pulling ahead minute by minute could affect voter turnout. “I’m profoundly uncomfortable with characterizing election results during Election Day,” a member of the ABC News “decision desk” told the New York Times in September, when the project was announced. But Slate notes that feared alteration of voter turnout is an “unproven theory,” and Issenberg says voters keeping an eye on Votecastr—manned by both Democratic and GOP data experts—are already bombarded by pre-Election Day polls and stats. “Why should information on Election Day itself be held to a different standard than on the day before it?” he tells Politico. Read Slate’s in-depth explainer.

But that is just my thoughts.

First, no this is not a post about Lenin’s famous pamphlet by the same name……..

This election has proven to be the election that has nothing to offer the people of this country but more and more interventionism….NO where is there a candidate with the exception of 3rd party candidates that has anything to say other than more….more….more to mindless interventionism.

They are, the two major ones, in bed with the defense contractors of the M-IC…..

How can this change?

In the midst of an election in which the issues are largely ignored in favor of sensationalism and smears, the anti-interventionist voter is pretty much at sea. Hillary Clinton’s demagogic Russia-baiting of Trump as a Kremlin “puppet” augurs a foreign policy that will take us back to the arctic winter of the cold war, circa 1950. On the other hand, the GOP nominee, for all his encouraging “America first” rhetoric and his stated unwillingness to get into another arms race with the former Soviet Union, would likely take us into other quagmires – ISIS, China, Iran – and, in any event, cannot be trusted.

So what is to be done?

The first thing is to disabuse yourself of the notion that any politician or political party currently prominent will magically get us out of the business of Empire. This isn’t to say that political action is wrong, or ineffective – far from it. What I’m saying is that it is up to us to build a movement out of which a new politics of peace and liberty can be nurtured and brought to maturity.

American people need to stand up and start worrying about the future and the problems that all the nation’s interventionism has created….it is a vicious cycle that needs breaking and only the voter can do it….. 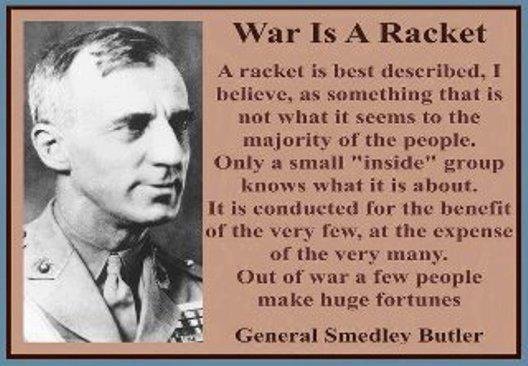 I have been saying for the start of this election cycle that there was NO one that had any idea about how to be a leader on the world stage.  And so far I have seen leader from either of the two nominees…..

Which candidates show the leadership this country desperately needs?

Let’s start with the GOP candidate for president, Donald Trump……

Many downwardly mobile Americans are confused about what happened to them, which explains the attraction of Donald Trump, who offers few coherent solutions but may have a lasting impact on U.S. relations with the world,

Donald Trump most likely will not be elected President. Still, his historic campaign has sent shock waves through the American body politic. All are asking what it means and what it portends. The focus is on America at home rather than abroad. Foreign policy issues have been overshadowed by anxious domestic concerns.

Moreover, Trump never formulated a coherent view of international issues. Like the average guy, he simply spat out whatever thoughts passed through his head as he had caught snippets of Fox News. Any attempt to discern logic and strategy from Trump’s disjointed exclamations proves frustrating.

Nothing about Trump fills me with confidence.

How about the Dems choice, Hillary Clinton?

But her substitute of “Doing stupid stuff” is even worse.

Another dud in the making…..confidence at ZERO!

Just maybe it is time to re-think the term “leadership”…….

As a retired lieutenant colonel for the U.S. Army, I want to be positive. Even when I’ve identified major conceptual and practical failures in the conduct of American foreign and military policy, I’ve suggested alternatives that could improve the situation. But when looking at the state of our foreign policy in this moment, and given how entrenched the foreign-policy elite in Washington has become, a rational optimism is getting more and more difficult to find.

In practice, the current administration tries to keep a lid on problems by applying limited military power—at least regarding troop levels—over large sections of the globe. These military operations are tactical in nature, designed to achieve small-scale results, without the consideration of how or even whether they support some larger strategic objective.

With confidence lacking there is only one thought that comes to mind……on the international stage this country is so screwed!