Today is New Years Eve…the end of yet another year….during that year we lost so much and so many….

Just a reminder of all we lost…..The Year The Music Died! 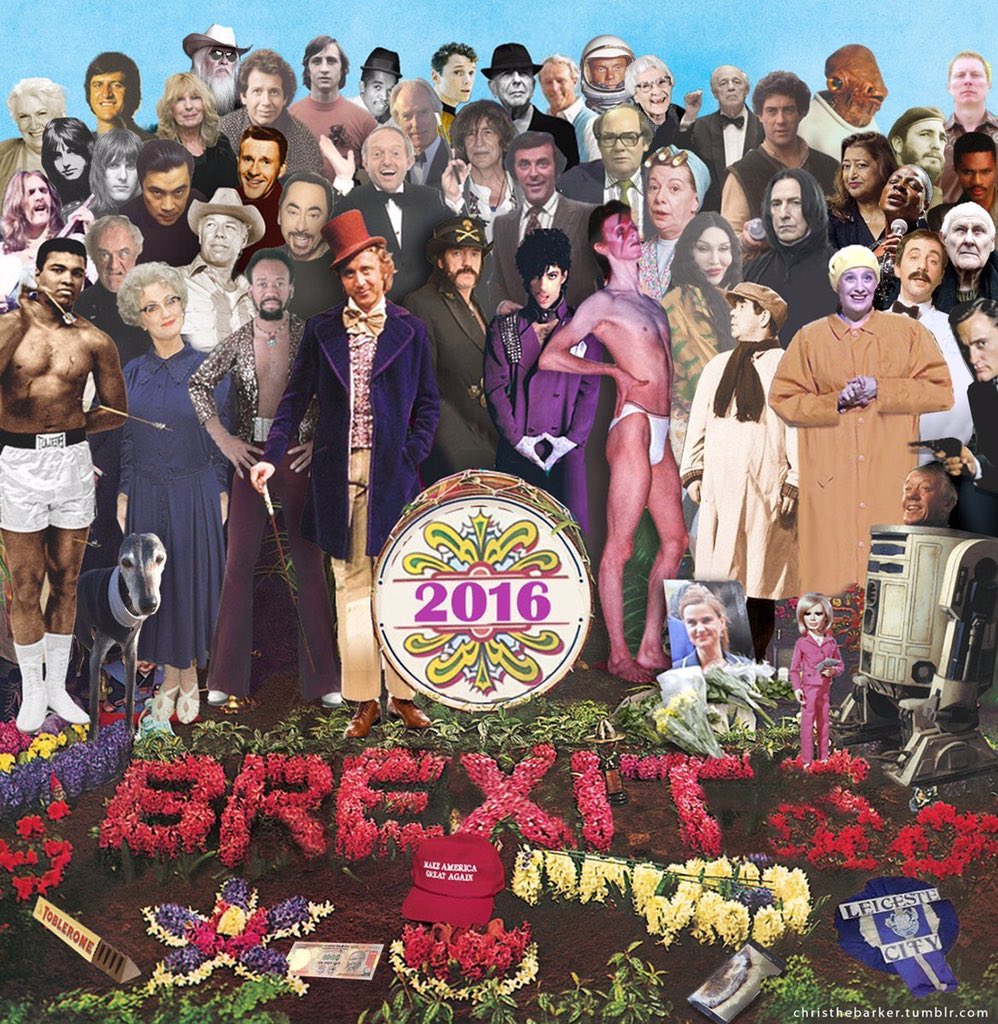 Since I wrote this draft we have lost three more……George Michael and Carrie Fischer…..and the “unsinkable” Debbie Reynolds….

I would like to thank you guys for making 2016 a great year for IST….it makes it all so worthwhile and makes this old man very proud of all of you.

Please my friends have a safe and secure New Years Eve…..Please do not drink and drive…..remember you will pay for too much fun the next morning….

Time for a spinach and goat cheese omelette with a bit of champagne…..now that is breakfast….then a little relaxation to recharge the mental batteries…

After much thought and few people wanting to see the awards return I have decided to give it a try again….but this time the name will be changed to the Asshat Award from the original Anal-ocity Award.

I will attempt to award a monthly “Assie” and then those 11 winners will compete for the Annual “Assie”……please during this time if anyone sees or hears something they think would be a winner let me know….if it is used I will give credit to the person and/or blog that turned me onto it.

The monthly winners will be posted on the last day of the month….the month of December will not have a monthly winner so that IST can concentrate on the annual winner.

Since I decided this recently there was NO time for an annual thing so I found what I considered a bonehead statement for the 2016 award…..

The 2016 winner of the IST “Assie” Award is GOP rep of Michigan, Bill Huizenga…….

Rep. Bill Huizenga (R-Mich.) says there’s “definitely” going to be changes in health care delivery after Republicans repeal the Affordable Care Act, and people are going to need to take more responsibility for the cost of their treatment.

He gave a personal example of how do this: When his 10-year-old son recently fell on the driveway one evening and injured his arm, Huizenga waited until the next day to take him to the doctor because it cost less than bringing him to the emergency room that night.

To the honorable Rep. Bill Huizenga…..congrats on your award……and we at IST look forward to your views in 2017….Good luck.  (a copy of this post will be emailed to the office of the winner)

As this year, 2016, comes to an end….I feel that I must do the right thing and just confess my transgression…..

I will come clean….I did not vote for Trump or Clinton…..surprised?

So the result of the election was all on my shoulders.

As usual I vote my principles and neither of these turkeys have any….principles that is…..they are nothing but the mouthpieces of the ruling elite…..

Once the bad news was given that the Dems and their terrible candidate had lost the election the liberal pundits starting blame everybody for their loss…..and I was one of those reason because I voted for Jill Stein.

After almost two months since that horrible day, in their minds, they are still pointing fingers and telling everybody that did not vote for their suck ass candidate that we are un-American for allowing Trump to win the election…

Turn to any channel that you prefer and just listen to any of the so-called liberal commentators and you will hear all sorts of excuses….

These commentators have one characteristic of their Right wing opponents….they are “one trick pony”….neither know how to lose graciously instead they have to have a scapegoat….and in this case it is ME because of my voting habits.

But there is more on this subject…..

The catastrophic election results have left Democratic Party hacks lashing out at, well, pretty much everyone for failing to support their miserable candidate.

On November 8th, Americans issued a stunning rebuke to the urbanite pretensions of the liberal capitalist class by electing crazed right wing strongman Donald Trump to the presidency. In what is certainly a global catastrophe, the election defeat meant Democrats lost control over all three branches of federal government, while the Republicans continue their spree of Koch funded state legislative takeovers.

Source: Liberal commentators respond to election catastrophe by lashing out

So let them talk and bitch and whine…they sound just like their GOP counter-parts….they are excuse makers not solution finders.

One thing I will not let go of is the fact that Clinton, her minions and the DNC sabotaged a candidate that was far more likeable and electable than she was…..they can keep harping on the Russian fear mongering but none of that matters….they cannot outrun the crime they committed all to try elect a toad that was not worth the time or effort.

Okay we have a report issued by the Intel people and the FBI on the hacking of the DNC and Podesta’s email account…..

Do you believe or do you join with your new “messiah” in the story of the hack?

The 13-page report provides technical details regarding tools and infrastructure used by Russian civilian and military intelligence services to “compromise and exploit networks and endpoints associated with the U.S. election, as well as a range of U.S. Government, political, and private sector entities.” (See the entire report below.)

There is not much more in this released report that one could not have found on-line…..but in case you would like to read the report for yourself…..

Personally, I would like to see the finished report when it comes out, probably next year….that is if it is not squashed by the new guy.

I cannot leave you guys without a little history……94 years ago, 1922, the Union of Soviet Socialists Republics, the USSR, was established….. 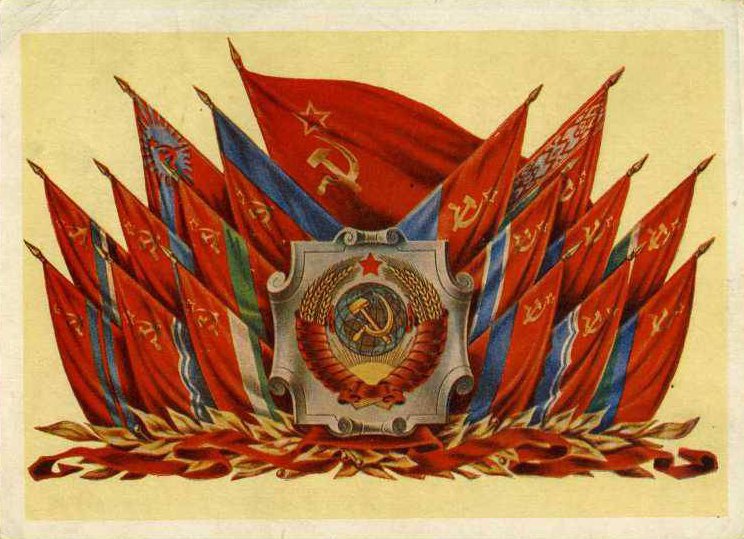 Those are the now infamous words uttered by Neville Chamberlain after is meeting with Hitler over the annexation of parts of Czechoslovakia….the path that proved to lead to a larger conflict.

These days it is words that could be applied to the conflict in Syria….with the same results in the end.

The Syrian army has announced a nationwide ceasefire, the AP reports. In a statement carried by state news agency SANA on Thursday, the military command “declares a comprehensive nationwide cessation of hostilities as of midnight.” State TV says the ceasefire paves the way for reactivating negotiations to end the conflict and says the ceasefire comes after the “successes achieved by the armed forces,” an apparent reference to the capture of rebel-held neighborhoods of Aleppo earlier this month. Russian President Vladimir Putin said Thursday that Russia and Turkey will guarantee the truce, and he’s ordered the Russian military to scale down its presence in Syria, where it has provided crucial support to Syrian President Bashar al-Assad’s forces. Turkey supports the opposition.

Putin didn’t say how many troops and weapons will be withdrawn and noted Russia will continue “fighting international terrorism in Syria” and supporting Assad’s military. Turkey’s Foreign Ministry says groups regarded as terror organizations by the UN Security Council will be excluded from the ceasefire, apparently referring to ISIS and the al-Qaeda-linked Jabhat Fateh al-Sham Front. It says the government and the opposition have agreed to halt attacks, including aerial attacks, and not to expand territories under their control in a way that would be detrimental to each other. Meanwhile, Ahmad Ramadan of the Syrian National Coalition said in text messages to the AP that members of the Free Syrian Army, a loose alliance of several moderate rebel factions, will abide by the truce but retaliate to violations by government and allied forces. The ceasefire is to be followed by renewed peace negotiations to end the nearly six-year conflict.

Chamberlain had to deal with one lunatic…this time around it is far more complicated than in 1938….this time there is many more lunatics than in the past.

ISIS and the AQ affiliate are not part of this ceasefire….so how does this constitute a ceasefire in the entire country?  So the war on these groups will continue, right?  How does that constitute a countrywide ceasefire?

I could say this is a good first step….but knowing the players…..will be a momentary lull.

I mean with so many players what could possibly go wrong, right?

Note:  The site where I found this article is a bit of a conspiracy site and I am not sure about the validity of this news but seeing how we all have to retire or die at our desks I thought it would make a good conversation piece.

One sad situation in life is that we will all grow old and have to be put out to pasture (retire)….and the big question is will most Americans have enough cash saved to live a comfortable life?

I was unfortunate enough that hurricane Katrina injured me and I had to retire….but I was employed by the state and had a good retirement plan….sadly those days are slipping away….now employees are forced to “invest” their money and in doing so are at the mercy of the economic system under which we live….

For some the only retirement they have is their Social Security and the way things are going it looks like that will not be there when a person retires.

What is the future of our swindling pensions?

For millions of public sector workers in the U.S., state-run pension funds are the only chance left for a comfortable retirement. In the hopes of providing a stable future for their families, an entire generation was duped into putting decades of their earnings into these supposedly ‘risk-free’ investments. Unfortunately, those who have entrusted the government to manage their life savings may end up destitute as a result.

Budgetary shortfalls that have plagued Detroit for years are now spreading to other municipalities. Since 2008, six local governments have been forced to renegotiate their debts in bankruptcy court, with many others on the same trajectory. The scale of the problem has been repeatedly understated by the media, but across the nation, a somber reality is beginning to set in.

Source: Pension Panic: The Coming Financial Bubble Nobody Is Talking About

It appears that it is only a matter of time before all Americans are suffering from some sort of pension panic.

Karma Is a Bitch!

The year is winding down and a new one awaits its birth…so why not get serious?

The election is over….Donald Trump has won and will become the 45th president of these United States.  PERIOD!

To Dems…get over yourself….you lost for good reasons.  You had a horrible candidate and you did not talk to the people about there concerns.  You see dummies…you believed your own hype and you got your ass handed to you.  We know…you are butt hurt from the loss…just get some Beaudreaux’s Butt Balm and let it go!

To Repubs…..stop whining!  You won let it go!  Stop worrying about what is being said by those on the “Left”…it does not matter!  You won the election now go and try to get through to the American people.  You should had expected everything that is being said…after all you twats spent 8 years doing the same thing with Obama.  You created the atmosphere for all this whining and crying….

Karma is truly a bitch!

All this pathetic whining on both sides is just disgusting….a waste of time that accomplishes nothing but headlines for the MSM.

I know…I know…that would be a novel approach that has not been tried for decades…but who knows…it might just work out for the better.